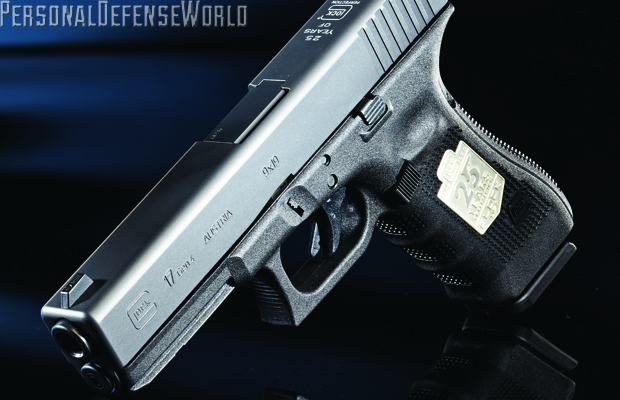 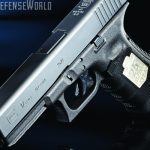 Over the past 25 years, since GLOCK pistols were first introduced into the United States, the guns of Gaston Glock have been praised and embraced by U.S. Law Enforcement agencies and firearms enthusiasts alike. They have also been maligned, insulted, at times unmercifully, by just about everyone with an opinion; and, for the last quarter century they have been torture tested by gun writers and lawmen in an effort to prove, or disprove, that a GLOCK is almost indestructible. Whether buried in ice, covered in mud, dropped in sand and baked in the desert, submerged in water or driven over by patrol cars, GLOCK pistols have prevailed like no other.

Every year since 1986, when GLOCK opened its U.S. sales division in Smyrna, Ga., the Austrian armsmaker has made strides to improve and perfect its own perfection. As Gaston Glock wrote almost a decade ago, “We cannot stagnate and stand still, as we would become obsolete and irrelevant. This is the philosophy I am constantly instilling in my staff.” As with perhaps no other armsmaker in the world, certainly none with so comparatively short a history, GLOCK has continued to go from strength to strength since the innovative firearms design was first unveiled in Europe in 1982.

That first model was the GLOCK 17, named for Gaston Glock’s 17th GLOCK manufactured product. Since its debut, and despite early criticism and incredulous urban legends about “plastic” guns, “combat Tupperware that could pass through metal detectors unnoticed” (except for the barrel, slide, springs, screws and bullets that contain metals!), the original GLOCK 17, and the models that have followed in a variety of calibers and configurations, have become internationally revered as benchmarks in the evolution of firearm’s design. In 2009, the National Rifle Association’s American Rifleman magazine voted the GLOCK 17 as the No. 3 gun of all time; not just for the 20th century, but in the entire 485 year history of firearms! Quite an achievement considering the company had never designed or manufactured a handgun prior to 1982.

Gaston Glock and GLOCK Ges.m.b.H. in Austria had a background working with synthetic materials long before the company decided to get into the firearm business. GLOCK’s intent was to apply its successful plastics technology to handgun manufacturing. While the use of plastics had been tried briefly by other armsmakers the G17 utilized a totally innovative injection-molded polymer frame design initially developed for the Austrian Armed Forces military trials in the early 1980s.

Invited to participate by the Austrian government, GLOCK Ges.m.b.H. was no stranger to the Austrian military, having provided the Army with machine gun belts, practice hand grenades, plastic clips, field knives and entrenching tools. Gaston Glock and his team had their first auto pistol designed and ready for testing by early 1982. The G17 passed every one of the 17 standards and requirements established by the Austrian Ministry of Defense and won the military assessment trials over eight other competitors. By year’s end, the G17 was adopted as the standard duty weapon for Austria’s armed forces and Law Enforcement authorities.

What Glock’s knowledge of plastics brought to the table was a totally new concept for building a military sidearm. With its polymer frame, the GLOCK was considerably lighter in weight than a steel-framed pistol. Having been designed new from the ground up it had no limitations as to how it could be engineered, thus the G17 had the highest magazine capacity of any 9×19 pistol in its class. The design did away with traditional features such as an external safety, de-cocking lever or hammer; in fact the G17 had no external controls that needed to be deactivated prior to firing the gun. For a military application (and as it turned out for Law Enforcement and civilian use as well), the GLOCK proved faster to use and with its unique “Safe-Action” trigger system, more straightforward in its functioning than any semi-auto then on the market.

In its final analysis, the GLOCK uniquely combined the advantages of a revolver (where the trigger is the safety) with the firepower (capacity) and speed of reloading of a semi-automatic pistol, permitting soldiers in the field to focus their concentration on tactical considerations rather than thinking about whether their sidearm was cocked, or the safety was still on at a critical moment. The “Safe Action” concept has been so successful that today GLOCK pistols are used by military and Law Enforcement agencies in 43 different countries.

With a growing U.S. market, GLOCK established a North American sales and marketing division in Smyrna, Ga., in 1985, which went into full operation 25 years ago in 1986. Initially an import and distribution center catering to the needs of Law Enforcement and civilian gun owners in the U.S., increasing demand for GLOCK models led to the expansion of the Smyrna operation and the addition of manufacturing of GLOCK’s patented polymer frames in 2004. In the past year, the complete manufacturing of G17 and G19 models has also begun at Smyrna. Gary Fletcher, GLOCK’s U.S. Vice President of Sales and Marketing, says that more models will be added to the Georgia facility’s production in the years to come. “The American market is the largest in the world,” says Fletcher, “and it has allowed the company to grow considerably from when Mr. Glock started it in the 1980s selling to the Austrian Army.”

The role that the United States market has played in GLOCK’s history over the last quarter century has had a significant impact on the company because GLOCK semi-autos have been so widely adopted by local, state and federal Law Enforcement agencies. When GLOCK first established its U.S. sales and marketing division the company had “zero penetration” in the Law Enforcement market. “Now,” says Fletcher, “we have captured 65% of the Law Enforcement market across the United States and that includes local, state and a big majority of federal government customers. We also have some military customers, we are not allowed to talk about whom they are, but we have a presence in the military also.”

When GLOCK entered the U.S. market the company only had one model, the G17 in 9×19. The advent of the .40 cartridge in 1990 brought about a sweeping change in Law Enforcement sidearms. Demand from America’s Law Enforcement community prompted new development as police and federal agencies quickly gravitated to the new, more powerful round, which quickly became the “go to” cartridge when the 9×19 was found wanting in ballistic performance. GLOCK was first to respond introducing the G22 .40 that same year. Explains Fletcher, “the .40” is by far the most popular pistol in Law Enforcement, bar none, by all manufacturers. Commercially, the 9×19 is our best seller and there’s still a lot of 9×19 models used in Law Enforcement, as are .45 Autos (the G21 introduced in May 1991, sub-compact G30 introduced in 1997 and sub-compact “Slimline” G36 in 1999), but nothing compares to the .40.”

GLOCK’s proprietary .45 G.A.P. cartridge (designed in Austria by Gaston Glock) and G37 model has also been well received within the Law Enforcement community since its introduction in 2003. The G.A.P has already been adopted by the Pennsylvania State Police, Georgia State Police, New York State Police, South Carolina Highway Patrol and Florida Highway Patrol, among others.

“The American market has absolutely had an effect on the models we manufacture today,” says Fletcher. “In most of the other world markets, the commercial market is not very big. In some markets you can’t have anything but a 9×19, so all the different chamberings available today from GLOCK are pretty much American influenced. A lot of these models in the U.S., like the .357, the .45 G.A.P. and obviously the evolution of the .40 from the 10mm Auto, came about at the request of Law Enforcement.”

This applies equally to the introduction of compact and sub-compact models by GLOCK, which have mainly come about in response to American consumer demand, particularly from Law Enforcement, where back-up guns have become so vital. “The G26, G27, G30 and G36 were all influenced by the Law Enforcement and concealed carry market,” says Fletcher. GLOCK’s line of compact and sub-compact semi-autos in 9×19, 10mm Auto, .357, .40, .45 G.A.P. and .45 Auto represent a sizable portion of GLOCK’s U.S. sales. Interestingly, the armsmaker’s smallest caliber models, the .380 Auto G25 and G28 are not available commercially in the United States.

Tomorrow, Today, After a quarter of a century, which in most nations marks the first great benchmark in the history of any successful business or event, GLOCK has gone from a virtual unknown to an established name in the American lexicon of firearms. GLOCK has introduced a total of ten Gen4s in one year. These additions to the Gen4 line reflects the commitment being made to this line of products. The future of the entire line is more than just a little promising with agencies and individuals already requesting certain model numbers be offered in Gen4.

GLOCK has been very fortunate in America. “There are two main reasons for that,” Fletcher says, recalling his own experiences as a Washington, D.C. police officer in the 1980s. “The majority of police were still carrying revolvers. They were just outgunned by the drug gangs and everything, so the trend started there in the late 1980s to move Law Enforcement agencies to more capacity, so not only did the GLOCK pistol hit the U.S. market at the right time, it was revolutionary in its design, its weight, its reliability and durability and that’s what made it a hit in the U.S. market.”

Twenty five hundred pistols will be sold that include a silver (not silver plated) 25th Anniversary logo outline on the frame of the gun, top of slide with text: 25 years of GLOCK Perfection in USA. A certificate indicating the limited nature of the pistol will be included in each of the silver (not black) boxes.

What’s coming in the next 25 years? Fletcher isn’t giving away secrets, he just says, “Stay tuned!” 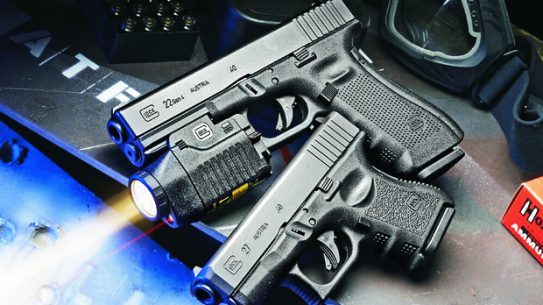 THE NEW GLOCKS: Evolution of the New Gen4 Series