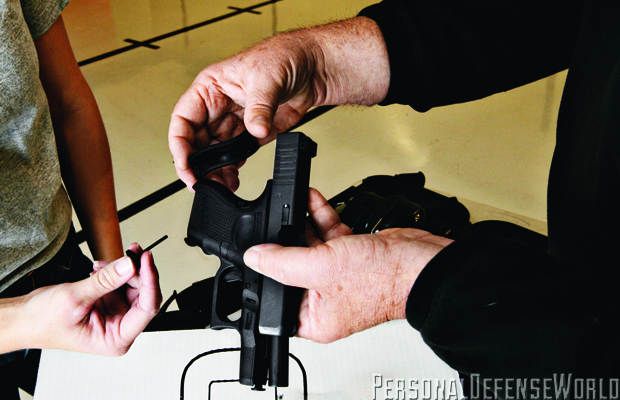 1 of 4
CE7
Randi and author switch back straps with supplied pin punch and larger back strap in less than a minute! 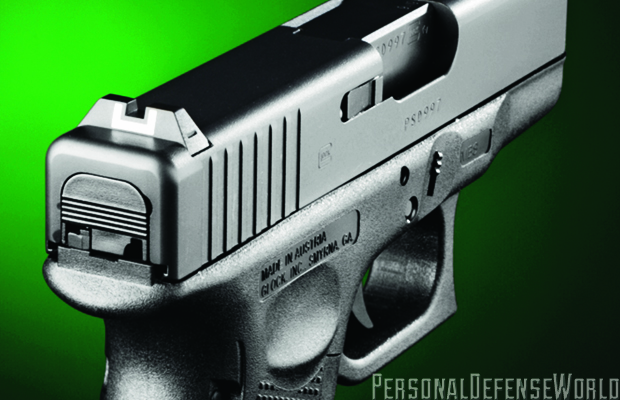 2 of 4
Glock 26_Gen4_Details 0633
From this rear view, the enhanced receiver surface is notable, plus the Loaded Chamber Indicator (LCI) extractor. 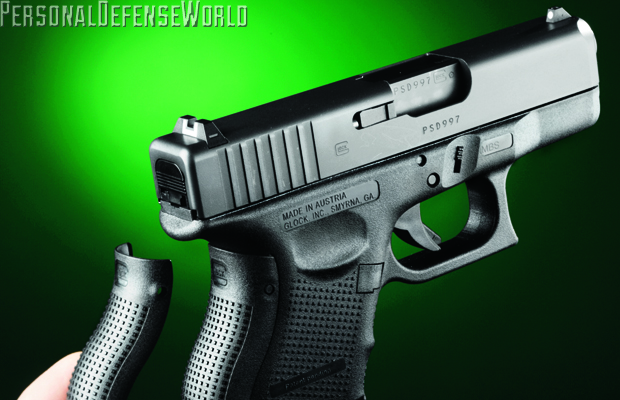 3 of 4
Glock 26_Gen4_Details 0641
Changing the Multiple Backstrap System (MBS) is simplicity itself! With an UNLOADED GLOCK, push the rear pin out, hook the MBS section at the bottom of the receiver, push onto receiver and replace pin. 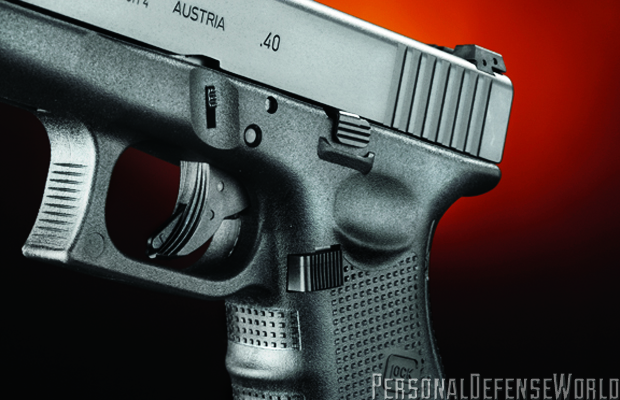 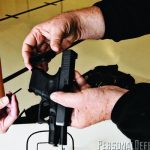 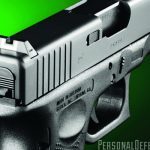 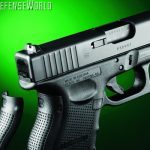 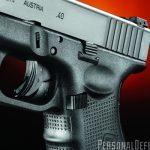 GLOCK continues with its revolutionary, evolutionary changes to its pistols by redesigning its subcompact-sized pistols. The GLOCK 26 (9×19), G27 (.40) and eight other models, have received the engineering attention that resulted in the Gen4 enhancements applied to the line. A brief review of the history of the GLOCK subcompacts is in order to appreciate the latest changes.

Revolutionary from the Beginning

The first GLOCK subcompact pistols were the G26 and G27 in 9×19 and .40, respectively. First introduced in the United States in the mid-1990s, they were a startling leap in firearm design. Before the GLOCK subcompacts, small handguns were typically chambered in less-than-powerful cartridges such as .32 or .380 Auto, and were generally “blowback” operated, as the action was not locked shut at the moment of ignition. Small and concealable with relatively primitive (if any) sights, many were inexpensive and constructed with cheap materials. There were smaller versions of more powerful pistols (e.g., 9×19 and .45 Auto variants), but these were essentially handmade by custom gunsmiths and were thus, very expensive.

The GLOCK subcompacts were a “sea change” and created a new paradigm. The new GLOCKs in “serious” calibers (i.e., 9×19 and .40) were production “mini-guns” and were overwhelmingly embraced by law enforcement and legitimate, licensed citizens. The design parameters were to make the GLOCK as small as possible and maintain the safety, reliability, durability and accuracy that are synonymous with GLOCK. The success was beyond anyone’s (except perhaps Mr. Glock’s) expectations.

Little known is that in pre-production prototype testing, a GLOCK 26 was constructed so as to fire fully automatic (as with the GLOCK 18) and fired thousands of rounds successfully in endurance testing. Several years later, a major American federal law enforcement agency found that the GLOCK 26 was, at the time, the most accurate production pistol they had ever evaluated. People who had GLOCK 17s or G19s bought G26s as a companion piece. Law Enforcement officers who were already armed with GLOCK 22s in .40, received the new GLOCK 27 with great enthusiasm. An added bonus was that magazines for the larger models fit and functioned in their smaller counterparts; the perfect backup for the GLOCK-armed officer.

The very first subcompacts had “target grips,” with smooth grooves on the frontstrap and thumbrests on the side. Later production models had checkering molded into the frontstrap. One of the major attractions of the GLOCK subcompacts to organizations was logistical in nature: about two-thirds of the parts used to construct the smaller GLOCKs were interchangeable with the larger GLOCKs.

Other notable aspects were the dual recoil spring system and the fact that the smaller GLOCKs mimicked their larger brothers in control locations; the trigger, magazine catch and slide stop lever. Instruction and training were thus simplified. The subcompacts were nicknamed “pocket rockets” and “baby GLOCKs,” but they had the same qualities of the bigger GLOCKs: Tenifer finish on barrel and slide, polymer frames, cold hammer forged barrels and GLOCK-designed “Safe Action” fire control trigger system. They were as accurate and tough as any. Within the past year, the GLOCK 27 passed a 20,000 round endurance test by a major U.S. federal law enforcement agency and is now, along with the GLOCK 22 Gen4, approved for purchase by federal agencies.

1 of 4
CE7
Randi and author switch back straps with supplied pin punch and larger back strap in less than a minute!

2 of 4
Glock 26_Gen4_Details 0633
From this rear view, the enhanced receiver surface is notable, plus the Loaded Chamber Indicator (LCI) extractor.

3 of 4
Glock 26_Gen4_Details 0641
Changing the Multiple Backstrap System (MBS) is simplicity itself! With an UNLOADED GLOCK, push the rear pin out, hook the MBS section at the bottom of the receiver, push onto receiver and replace pin.

So, what does the Gen4 bring? The dual recoil spring design for the GLOCK subcompacts was incorporated into the larger pistols, standard and compact sizes such as the GLOCK 22 and GLOCK 19. But the Gen4 redesign incorporates a patented Multiple Backstrap System (MBS) and a reversible magazine catch. These features are present in the new Gen4 subcompacts and they do, as with their predecessors, make a remarkable difference.

Without a backstrap in place, the new Gen4 subcompact frames have a reduced trigger reach of about 2mm; this is the GLOCK SF (Short Frame) size. While this does not sound like much (and isn’t readily apparent to the eye), it results in a remarkably different “feel.” Attaching another backstrap—they come in two sizes, medium and large—is simplicity itself. First, please make sure the GLOCK is unloaded. Then, the trigger mechanism housing pin should be pushed out (a punch is supplied). The selected backstrap is hooked on the bottom of the frame, aft of the magazine well and then snapped onto the rest of the frame. The pin is replaced and the GLOCK is good to go. The medium size backstrap adds the subtracted 2mm, resulting in a differnt sized grip. The large size backstrap is installed the same way, on the SF frame—only one backstrap at a time—and results in an additional 2mm over the trigger reach measurement. It’s no real surprise that most people prefer the SF size; interestingly, though, there are some who prefer the large backstrap attached. But then, that’s why GLOCK invented it.

The reversible magazine catch is installed from the factory with the button protruding from the left side as the GLOCK is held in a firing grip. A bit larger than the earlier generations of magazine catches, it extends a bit farther back into the receiver—about +5mm according to my measurement. I have not found anyone who does not like it, and I find my reloads a bit more positive because of the increased surface area. The catch is easily reversible by field stripping the GLOCK pistol and then using a small punch or screwdriver to release the magazine catch spring from the body of the catch itself. The catch is then flipped over and reinstalled in the frame and the spring reseated. It is recommended that this be performed by a Certified GLOCK Armorer.

The Gen4 “cubid” 360-degree rough surface texture finish on the frame is present. The usual GLOCK tough metal finish and hammer-forged barrels are also standard, as mentioned previously. Parts are largely interchangeable amongst the generations, with the exception of the trigger mechanism housing (TMH): it is of the SF variation.

We were only able to squeeze in a short range session before press deadline but there were no surprises. We fired both the GLOCK 26 Gen4 (9×19) and GLOCK 27 Gen4 (.40) and results were similar – accurate and reliable, as we have come to expect from GLOCK. GLOCK USA now has a new 25-yard indoor range at the brand new GLOCK Professional Training facility, just down the street from the main plant. Accuracy was more than adequate for defensive purposes, even at extended distances.
The new GLOCK Gen4 subcompacts—the hits just keep on coming! 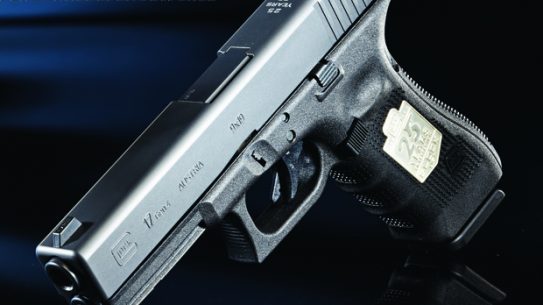 Glock Around The Clock

Glock, the Austrian trendsetter, celebrates 25 years of service here in the United States.