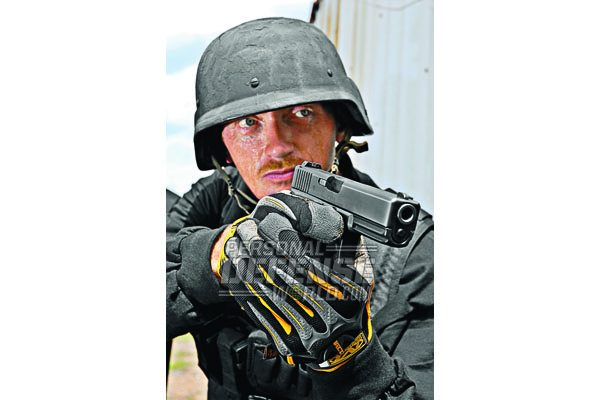 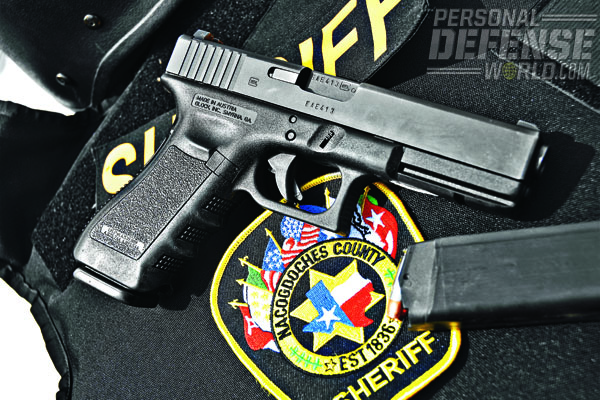 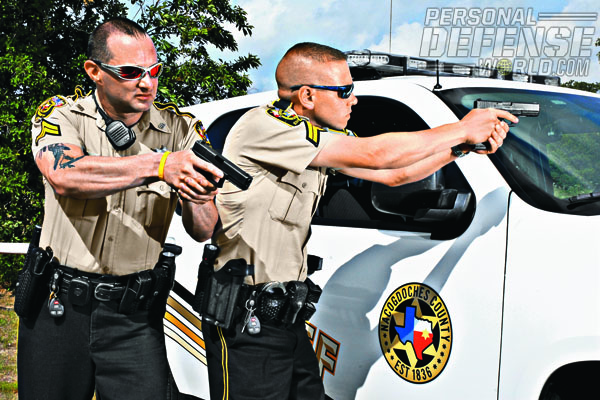 3 of 10
Going the .357 Distance with Glocks 3
Texas has evolved since entering statehood, but the need to protect its people from crime still exists. Those trusted with that responsibility need weapons they can count on. The sheriff’s office of Nacogdoches County trust GLOCK. 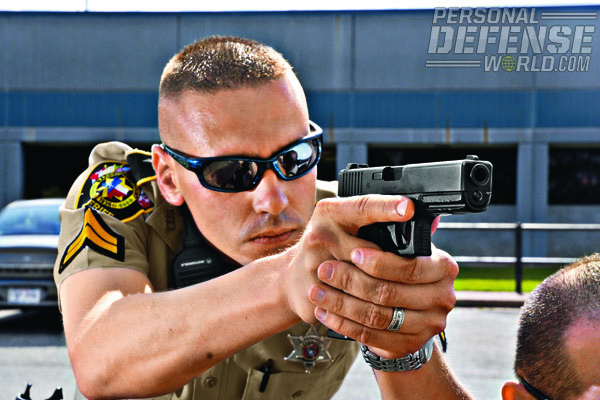 4 of 10
Going the .357 Distance with Glocks 4
Proven reliability, coupled with the excellent ballistics of the .357, make the GLOCK 31 the perfect choice for rural patrol officers. 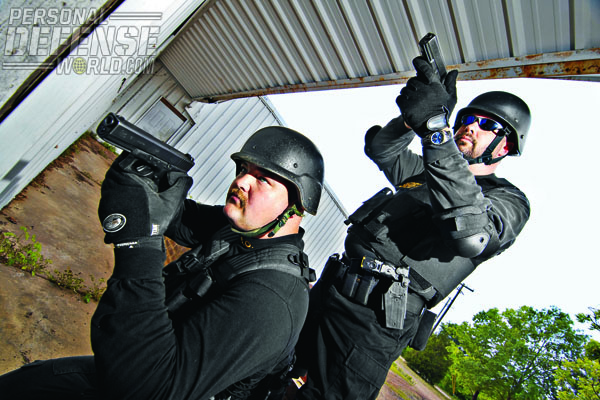 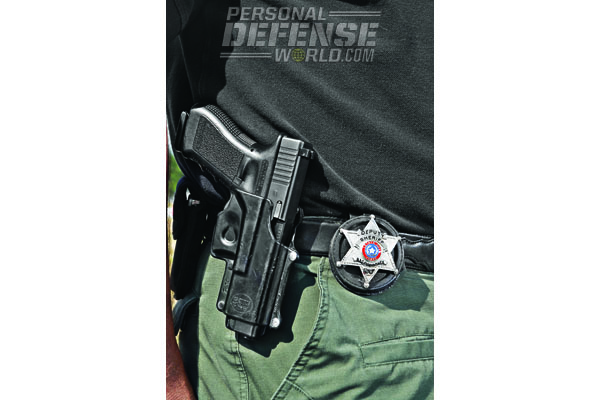 6 of 10
Going the .357 Distance with Glocks 6
GLOCK’s durable finish withstands the harsh elements of Eastern Texas—a primary factor in its selection by the Nacogdoches County Sheriff’s Office. 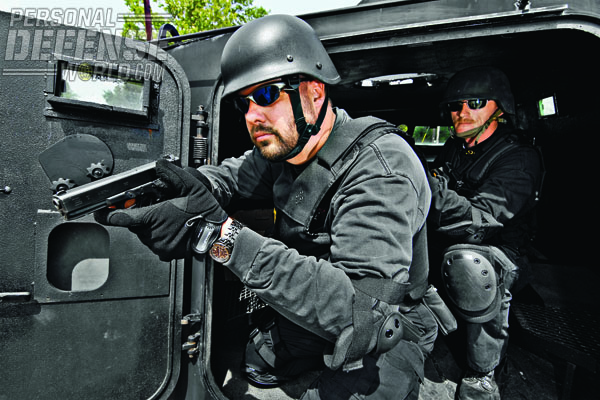 7 of 10
Going the .357 Distance with Glocks 7
Members of the Sheriff’s Emergency Response Team rely on their chosen weapon for regular duty—GLOCK. 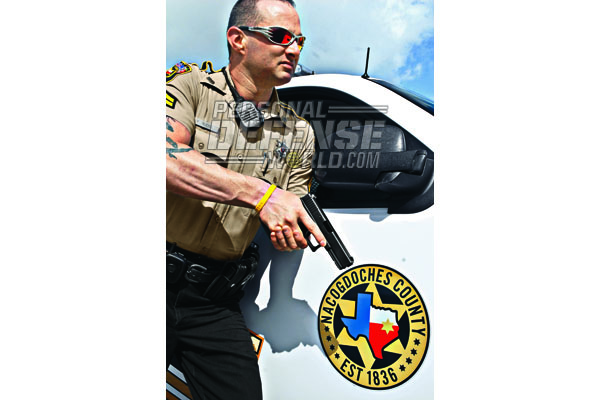 8 of 10
Going the .357 Distance with Glocks 8
Wanting the effectiveness and penetration of the .357, the Nacogdoches Sheriff’s Office choose the GLOCK 31. 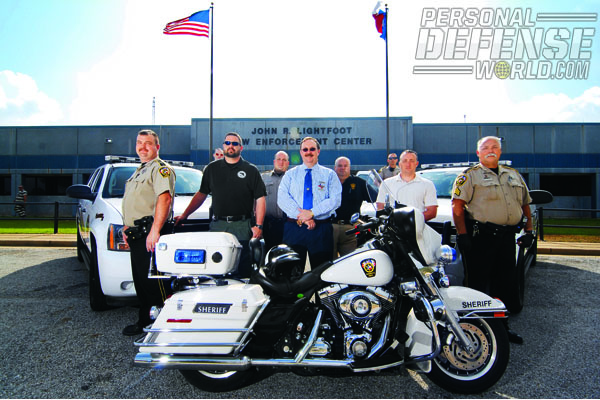 9 of 10
Going the .357 Distance with Glocks 9
Following his election in 2001, Nacogdoches Sheriff, Thomas Kerss, center, initiated a program to select the best patrol sidearm for his deputies. After extensive evaluation, the Sheriff’s Office selected the GLOCK 31. 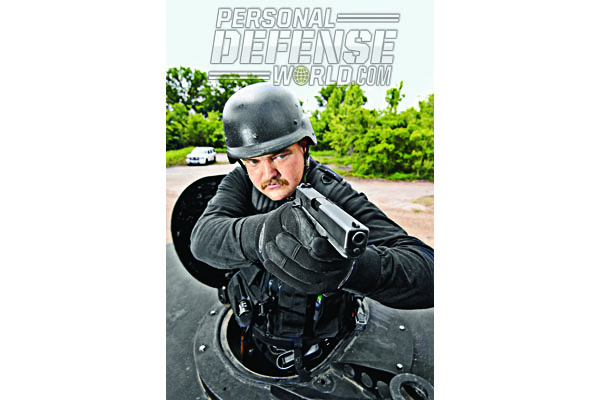 10 of 10
Going the .357 Distance with Glocks 10
Standing guard over Nacogdoches County Texas, deputies depend on their abilities and the GLOCK 31. 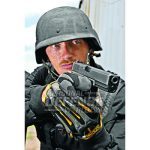 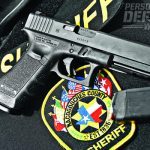 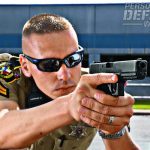 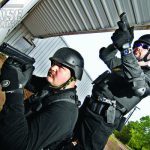 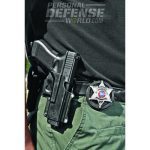 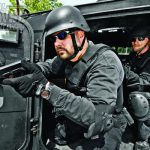 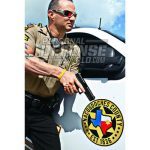 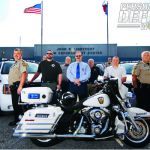 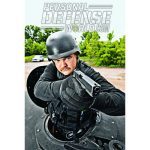 Texas history can be traced back many centuries to the State’s colonization—a time of new beginnings, hard lives and hard people, who everyday depended on their firearms to live—for food and protection. The use of a firearm was intrinsic in the way of life.

Today’s Texas may be a kinder gentler State than in 1542, when the Spanish were first recorded in today’s oldest city in Texas, Nacogdoches, but the need for firearms still exists. Crime has not gone out of style.

Solitary Confinement
The city of Nacogdoches is located deep in the Piney Woods of East Texas, in the county of the same name. The area gained national attention when the Space Shuttle Columbia disintegrated during reentry, scattering much of the debris across miles and necessitating a well-publicized recovery effort by national, state and local agencies. Covering 982 square miles (80% as much as Rhode Island), the population of this historical region, at 65,000, is about one million less than the smallest state. The Sheriff of Nacogdoches, Thomas Kerss, and his department of 130 employees, including 45 commissioned personnel, are charged with protecting the citizens of this county—urban, suburban and rural. A duty made somewhat easier by the presence of urban and suburban LE agencies.

Of course, this “boon” means Nacogdoches deputies spend a large portion of their time enforcing in rural areas with some 700 miles of road. With a limited number of deputies per shift and only a few state Highway Patrol Troopers for support, Nacogdoches deputies can find themselves waiting an eternity for backup if things take a bad turn. At this point, an officer has to have dependable equipment that works every time. When Thomas Kerss was elected Nacogdoches Sheriff in 2001, after serving as chief deputy for a number of years, he knew from personal experience what it was like to be alone, waiting on backup to arrive. The Sheriff’s Office was equipped with a wide variety of weapons, many he considered sub-optimal. The standard-issue pistols seemed to constantly require maintenance, including frequent oily wipe-downs to keep the finish from rusting in the deep east Texas humidity.

The Sheriff, currently the President of the Texas Sheriff’s Association and a member of the National Sheriff’s Association, began a program to change that. Eventually, every patrol car contained an AR-15, a 12-gauge shotgun in the Remington 870 or Benelli family and funds were found to issue each deputy a new pistol. But what pistol?

Handy Connection
Sergeant Kenneth King had been an LEO for a number of years at that point and a convert to GLOCK early on. In fact, his was only the second GLOCK carried at the SO during these early years. When the sheriff began examining the pistols available, Sergeant King tossed GLOCK’s hat into the ring, pointing out the pistol’s sterling reputation and strong points: a highly durable finish, resistant to all that east Texas could throw at it, easier manual of arms which meant a smoother transition from the current pistol and more reliable operation by an officer under stress, excellent pointability for better first shot hits, a recoil-reducing design for quicker and more accurate follow-up shots, a constant, short trigger pull for better aimed fire every time, three safety mechanisms (trigger, firing pin and drop safeties), without resorting to external levers that require deliberate manual operation before firing, the virtual absence of maintenance issues and pistol failures, high-capacity magazines, and, available in a number of potent chamberings. The fact that Sergeant King was a GLOCK armorer was just icing on the cake!

GLOCK’s status in the law enforcement community was an important factor to Sheriff Kerss. “It’s a testament to GLOCK’s reputation and design how many agencies across the country are currently using them,” he told me.

When the dust had settled, GLOCK handily came out on top, much to the pleasure of the rank and file deputies. Cartridge selection did not take nearly as long, with the .40 and .357 being the only contenders in the Sheriff’s mind. As noted, the majority of a deputies’ patrol is in the more rural areas of Nacogdoches County, providing a greater chance of a vehicle being involved, for cover or escape. Against such “hard” targets, the Sheriff wanted something to equal the effectiveness and penetration of the famous .357 Magnum. That cemented the choice as the GLOCK 31, chambered for the bottlenecked .357 round. Sheriff Kerss also felt the most likely officers to respond to a call for backup, and from whom his men might borrow ammunition, would be the Texas Highway Patrol, who carry pistols chambered for the same round.

As a bottlenecked cartridge, the .357 offers improved feeding reliability over most non-bottleneck rounds. The ballistics were designed with the fabled .357 penetration in mind, punching holes in vehicle bodies and glass with nonchalance, to dump its energy into less penetration-resistant threats. All of this while providing excellent controllability in GLOCK pistols, something revolvers stoked with full-house .357 Magnum loads did not have. A final plus was that the G31 and the .357 chambering make a flat-shooting combination—a factor the sheriff considers important for a rural patrol pistol. The potential for being unable to deploy the patrol carbine until the deputy can fight their way to it is all too real.

Finally, there was the realistic factor of cost. The previous issue pistols seemed inordinately expensive, especially for a department head required to justify every penny spent to the county government. The bounty the sheriff received for each previous brand pistol and the better price point of the GLOCK meant the sheriff could afford to furnish one to all his commissioned officers.

“I chose the GLOCK after giving a number of other brands due consideration. It all came down to reliability, ease of use and the effectiveness of the caliber they offered. The excellent value, though, certainly was a real bonus!” said Sheriff Kerss.

“Transition to the GLOCK was a snap,” Sergeant King stated, “with virtually no problems.” A tribute to the GLOCK design.

Well-Rounded Activities
Nacogdoches deputies are involved in more activities than patrol. They are responsible for security in the county jail and courthouse. Also, several are members of a combined county/city SWAT team with the Nacogdoches City Police Department, which also chose to standardize on the GLOCK shortly after the Sheriff Office’s decision. (Maybe it is just the natural combination of the names GLOCK and Nacogdoches!)

The Sheriff’s Office also has their S.E.R.T. (Sheriff’s Emergency Response Team), along with an armored personnel carrier, to handle traditional SWAT duties outside the city, including serving high-risk warrants at drug houses, fugitive apprehension, manhunts and surveillance. The deputies serving on either team carry the same pistols as they do on regular duty—GLOCKs!

TCLEOSE (Texas Commission on Law Enforcement Officers Standards and Education) determines how often the officers must qualify with their duty weapons. All commissioned personnel are required to qualify at least annually but Sheriff Kerss strives to do this twice per year. He expects deputies on the S.E.R.T., though, with their increased potential for violent confrontations on duty, to qualify even more often. Unfortunately, as anyone wanting to buy ammunition recently knows, ammunition has been in short supply. While the amount of carry ammunition (Winchester Ranger 125-gr. SXT) has been sufficient, the Sheriff’s Office has struggled to find enough ammo for the minimum annual qualifications, much less an aggressive, accelerated schedule.

When asked if they had considered changing chamberings (I knew not to bring up changing handgun brand!), both Sheriff Kerss and Sergeant King were quick to point out how happy they were with the GLOCK 31 and .357 cartridge. As long as they can find enough rounds, they plan to stay with the .357!

Were there any complaints regarding the GLOCK 31? Actually only one: they never wear out! It seems some deputies wanted to give the new GLOCK Gen4s a whirl, when those on hand wore out—something unlikely during their careers!

Passing through the southern area of East Texas, day or night, one is likely to come across a Nacogdoches County Deputy on patrol. They are there to provide law enforcement services to the citizens of their county and feel better equipped to do so with the GLOCK 31 at their side! 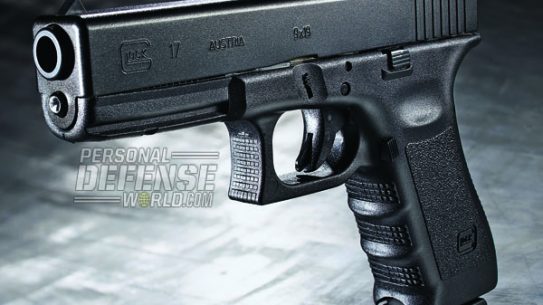 When the men and women of the Virginia Beach P.D. carry out their duties...