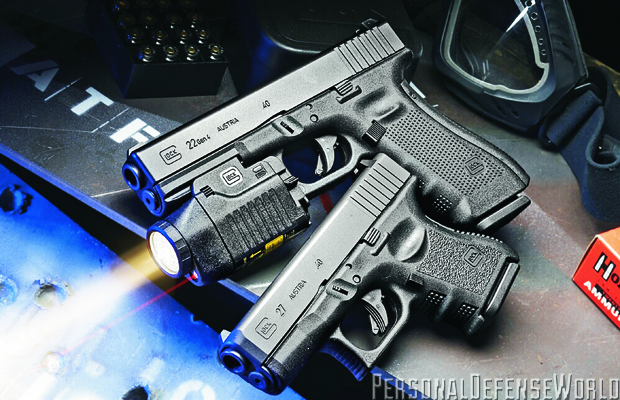 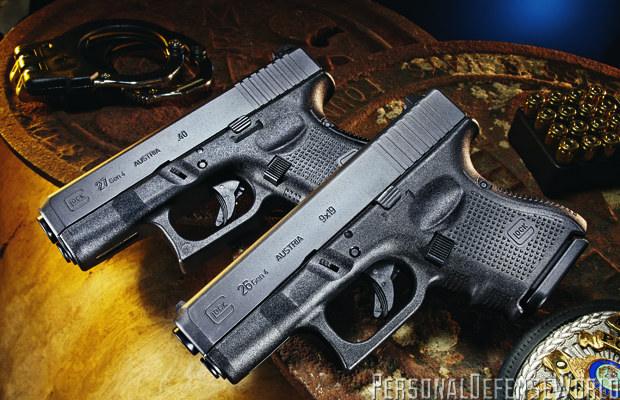 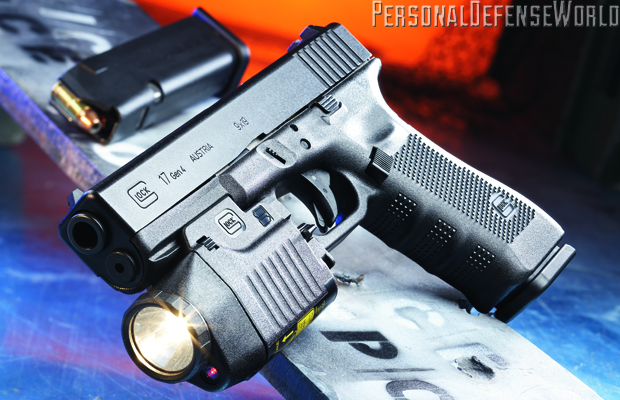 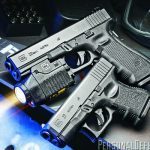 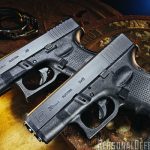 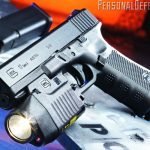 Evolution generally does not come full circle, but in the case of the new Gen4 models, we are back to the beginning; a polymer framed, high-capacity semi-auto, just like the original GLOCK introduced over a quarter of a century ago, only the Gen4 is an entirely new take on Gaston Glock’s benchmark 9×19 semi-auto pistol. It is evolution at its finest.

What the new Gen4 line brings to the table is not change for the sake of change, but change that has taken many years to achieve. The Gen4 series semi-autos are better-handling, better-engineered and more versatile guns than the original; the differences, although subtle, are both distinctive in appearance and in function.

Back to the Source

Introduced to the U.S. market in 1985, (the gun was developed in 1982 and named for inventor Gaston Glock’s 17th GLOCK manufactured product), the GLOCK 17 and later compact GLOCK 19 9×19 semi-autos have become internationally revered as benchmarks in the evolution of firearm’s design. In 2009, American Rifleman voted the GLOCK 17 as the No. 3 gun of all time. Not just for the 20th century but in the entire history of firearms! Pretty lofty praise and a tough act to follow, which GLOCK has done quite successfully over the years with a variety of models based on the original 9×19 and chambered for cartridges ranging from 10mm Auto, .40, .357, .380 Auto, .45 Auto and the manufacturer’s proprietary .45 G.A.P. Almost three decades after the G17 was introduced, there are now GLOCK models in virtually every chambering and frame size from .380 Auto subcompacts to the hefty 13-round G21 in .45 Auto, and Gen4 models in 10 variations chambered for 9×19, .40, .357, and .45 G.A.P.

Over the years, the GLOCK 9×19 and .40 variants (G22 and G23) have become the preferred service pistols of law enforcement agencies the world over, guns that have been put to the test and survived abuses most of us will likely never encounter; but, in the real world guns do get dropped, driven over by cars, covered in mud, buried in snow and ice, soaked by torrential downpours and submerged in water. This is the world in which GLOCK semi-autos have evolved.

After a quarter century in the U.S. market, the Austrian armsmaker really had little to prove, so why the Gen4? There have been numerous modifications to the gun since the early 1990s but nothing that has dramatically altered its appearance or operational characteristics; that is, until now.

With a magazine capacity of 17 rounds, plus one in the chamber, the G17 set its own benchmark the day it was introduced in Europe in 1982. Glock Ges.m.b.H. already had a background in synthetic materials when the company developed its first injection-molded polymer frame semi-auto for the Austrian armed forces. The advantages were immediately obvious: lighter weight and significantly reduced susceptibility to corrosion, water damage, the effects of severe temperatures and damage from impact, not to mention lower manufacturing costs (a GLOCK is still one of the most affordable high-quality semi-autos on the market). The original G17 also introduced the “Safe Action” design with a toggle safety projecting through the face of the trigger, thus making the gun safe through three separate safety mechanisms activated the instant the trigger was released.

When it came to looks, the G17 also had innovative “features” which included a squared-off slide giving the gun a very military bearing (which was intentional, as at the time of its development the company was vying for acceptance as the new sidearm of the Austrian Armed Forces). The G17 (designated the Pistole 80 or P80) has remained that nation’s military sidearm since 1982, when it replaced the venerable Walther P38.

There were numerous technical advantages to the GLOCK’s hard-edged, squared-off slide, not the least of which was durability. It also made it easier to cycle the action in an emergency by pushing the front of the slide against an angled surface like the edge of a table, or even the heel of your shoe. As has been proven in the field, the leading edge can also be used to rough sight the gun on target if the front sight has been damaged or broken off. These are all features that have become de rigueur within the GLOCK line.

The first notable change to the GLOCK came in 1991 when a new, integrated recoil spring assembly replaced the original two-piece recoil spring and tube design then in use. Slight modifications were also made to the GLOCK magazine design by changing the floor plate and fitting the follower spring with a resistance insert at its base. A second alteration came in the 1990s with the addition of checkering on the front strap and serrations to the backstrap. This constituted the so-called second generation.

The most notable revisions to the gun came in the late 1990s with a third variation incorporating an integral-with-the-frame accessory rail to allow the mounting of laser sights, tactical flashlights or combinations of both. Thumb rests on both sides of the frame and finger grooves on the front strap were also introduced to provide a short term fix for the issues with gripping the gun. A still later production modification resulted in an improved extractor that now served as a loaded chamber indicator with a tactile squared metal edge protruding slightly outward from the rear of the ejector port. This can both be seen and more importantly felt in situations which may demand an immediate knowledge of the gun’s condition. The locking block was also enlarged, along with the addition of an extra cross pin to aid the distribution of forces exerted by the locking block.

It is likely that no one outside of GLOCK had even thought about an improved gripping surface for the guns (although the grip size and shape on larger caliber models had been an issue in the past for shooters with smaller hands) but when the RTF2 model (Rough Textured Frame) was introduced with the G22 .40 version in 2009, a lot of eyebrows were raised. Less than a year later, there were four models including the G17. In 2010, a variation of the Rough Textured Frame (RTF) design was incorporated into the new Gen4 models. Replacing the pointy (RTF2) cubids, the new RTF finish uses tactile squares that provide a smoother gripping surface.

With the Gen4 the company addressed one of the biggest complaints with the GLOCK: grip size. While not a big gun, the G17 9×19 and G22 .40 were not sized for everyone. Chambered in the most popular calibers for law enforcement, the G22 Gen4 was the first model to offer GLOCK’s new MBS (multiple back strap) frame with a reduced short frame trigger mechanism housing to accommodate a greater variety of hand sizes. For 2011, the Gen4 line has been expanded to include the G19 Compact (9×19), G23 Compact (.40), G26 Subcompact (9×19), G27 Subcompact (.40), Standard size G31 (.357), G34 (9×19), G35 (.40) and G37 (.45 G.A.P.). The standard grip, which is slightly smaller than the previous models, can be covered over by one of two different panels, medium and large, that attach at the base of the magazine well and are locked into position by pressing an extended trigger housing pin through openings in the grip panel and frame. A special tool is provided for removing and inserting the pin. Unlike other interchangeable backstrap designs that only increase the center mass of the grips, GLOCK’s full-length panels lengthen the backstrap from the base of the magazine well to the top of the frame curvature ensuring that grip angle remains constant regardless of panel size.

With the Subcompact G26 9×19 and G27 .40 models having become established law enforcement backup guns, the availability of interchangeable backstraps will no doubt propel these two new Gen4 models to the forefront as the backup gun of choice for both police and CCW use.

I found the large backstrap greatly improved my grip on the G17. While I don’t have long fingers I do have a large palm and the broader curve of the larger backstrap filled the palm swell perfectly. The medium would certainly work for the majority of men and many women and the standard backstrap pretty much covers those with smaller hands, or if environmental conditions require, the wearing of heavy leather or insulated gloves.

While the aesthetics of the Gen4 certainly add to the gun’s serviceability, GLOCK had one more evolutionary change to make: the recoil system. Originally designed as a military sidearm, where the greatest variety of end users and training was to be expected, the original G17 and all subsequent variations had one inherent problem; being a lighter weight gun it was prone to more aggressive recoil. GLOCK had addressed this in various ways over the years with longer barrels (original G17L) and compensated models (initially with the G17C), but the fundamental issues still remained.

With the Gen4, GLOCK has taken a fresh approach utilizing a new double recoil spring and guide rod. The primary recoil spring goes over the guide rod as before, only this is a heavier, more tightly wound round spring, as opposed to the flat spring that preceded it. This assembly is then shrouded by an alloy case around which is wound an even larger secondary recoil spring. The combination, though a bit more demanding when cycling the slide to chamber the first round, significantly reduces muzzle flip, providing the ability to reacquire the sights for faster follow-up shots. In comparison to the previous G17, firing the Gen4 feels closer to that of a .38 Special than a 9×19. GLOCK chose to initially debut all of these improvements on the G22 Gen4 .40, which was followed by the much-anticipated G17 in 2010. 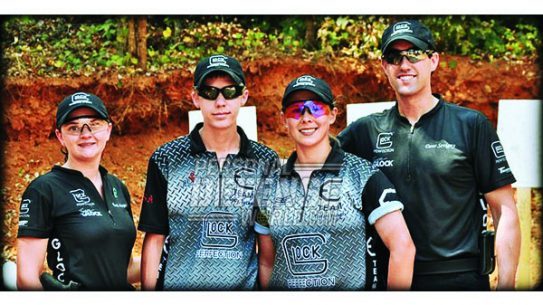