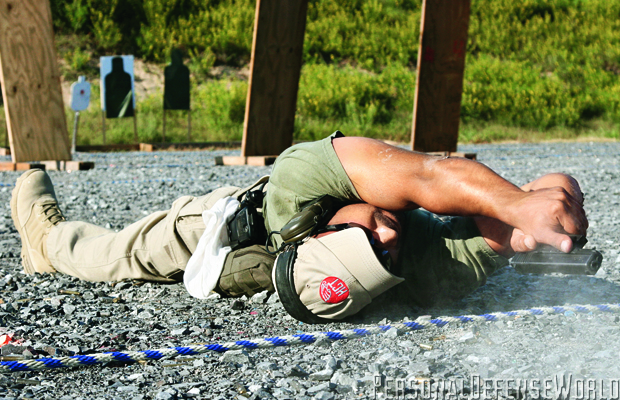 1 of 3
Harris Glock Default 3-1
Not every scenario can be predicted, but both HCT (top) and Personal Tactics (above) try to anticipate as many as possible, including having to shoot from your back or while taking cover behind a vehicle. Many students don’t realize that there is a best way to do each — until they are run through the drills. 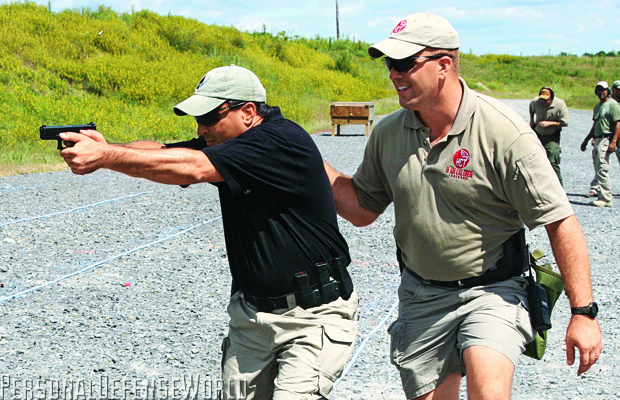 2 of 3
Harris Glock Default 5
Steve Reichert guides a student along a row of targets, teaching him how to engage multiple assailants while on the move. Mere accuracy isn’t enough at HCT. You have to be accurate while employing combat tactics such as movement and the use of cover. It’s a lot to learn and you don’t need to increase the complexity with a complicated, finicky pistol. That’s one reason HCT prefers Glocks. 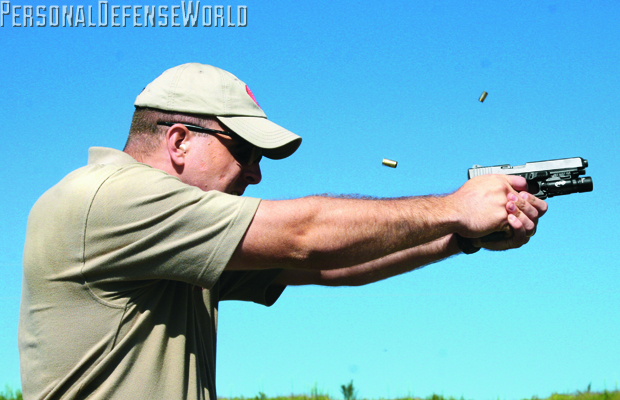 3 of 3
Harris Glock Default 6
Steve Reichert is no armchair expert on combat. The Iraq War veteran earned the Bronze Star with Valor for neutralizing nine enemy combatants in a single engagement. He has typically trained Special Forces and high-end operators, but now offers courses for lawfully armed civilians. 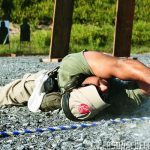 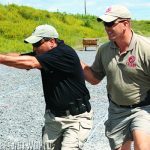 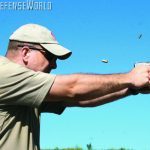 That’s right. Decades ago, when you visualized a handgun, it was usually a double-action revolver or—if you were an aficionado—a 1911. But today, when many shooters think of a defensive handgun, the GLOCK springs to mind. It is, after all, the choice of approximately 65 percent of the U.S. law enforcement market. Its place in the consciousness of American shooters really becomes apparent when you go to a defensive shooting school.

It was recently while attending High Caliber Training (HCT) in Arkansas and Personal Tactics in Georgia, two new, top-notch combat schools, that I began to realize just how dominant the Glock pistol is.

When I first got involved in handgun shooting, there existed a stereotype of the shooting instructor. He was often a Vietnam-era veteran, fifty-ish, with salt & pepper close-cropped hair. He had a bit of a belly, but was generally in pretty good shape and on his hip was a customized 1911 in a leather holster.

Get to a school today, though and you’re more likely to be confronted by a veteran of Desert Storm, the Iraq or Afghanistan War. He may be in his forties or he may be younger and on his hip there will typically be a GLOCK, often in a kydex holster.

Look at your fellow students and you’ll find them similarly equipped, regardless of skill level. When it comes to the difficult task of choosing a carry gun, while some guns are “more right” than others, a GLOCK is almost never wrong.

Both Steve Reichert, director of HCT, and Robert Wilson, Chief Instructor at Personal Tactics, each carry a GLOCK.

In fact, GLOCKs can be seen all over the vast 780-acre HCT facility. The school is an outgrowth of Tier 1 Group (T1G), a very high-level school for high-level operators in the corporate and military communities as well as a host of government agencies. Reichert took T1G’s pistol and tactical courses and pared them down and focused them into a three-day concealed carry course suitable for law enforcement officers and legally armed civilians who are basically proficient with handguns.

Reichert is a decorated veteran of the Iraq War, having earned the Bronze Star with Valor for neutralizing nine enemy combatants at ranges between 900 and 1,614 meters during a single engagement. Much of his staff are also recent military. They take their business very seriously, offering a course based on the most recent military data collected in the field from debriefings and after-action reports. They have a very low tolerance for what doesn’t work or is unproven and the majority of the HCT staff carry GLOCK 9x19s.

Reichert explains the appeal this way, “They are rather accurate out of the box, they run forever and the triggers are very manageable.”

Instructors put a whole lot of ammunition through their guns. This is particularly true at HCT, where instructors often join students on the firing line to demonstrate technique and also to maintain their own considerable skills. How do GLOCKs stand up to that volume of shooting?

“One of our instructors has 85,000 rounds down his GLOCK 17’s tube,” says Reichert. “The pistol is a little sluggish now since he hasn’t cleaned it—ever. Another instructor had his G17’s slide crack at around 220,000 rounds. GLOCK replaced the pistol, no questions asked.”

1 of 3
Harris Glock Default 3-1
Not every scenario can be predicted, but both HCT (top) and Personal Tactics (above) try to anticipate as many as possible, including having to shoot from your back or while taking cover behind a vehicle. Many students don’t realize that there is a best way to do each — until they are run through the drills.

2 of 3
Harris Glock Default 5
Steve Reichert guides a student along a row of targets, teaching him how to engage multiple assailants while on the move. Mere accuracy isn’t enough at HCT. You have to be accurate while employing combat tactics such as movement and the use of cover. It’s a lot to learn and you don’t need to increase the complexity with a complicated, finicky pistol. That’s one reason HCT prefers Glocks.

3 of 3
Harris Glock Default 6
Steve Reichert is no armchair expert on combat. The Iraq War veteran earned the Bronze Star with Valor for neutralizing nine enemy combatants in a single engagement. He has typically trained Special Forces and high-end operators, but now offers courses for lawfully armed civilians.

If you want to see one group that relies on GLOCKs even more than HCT’s instructors, though, look to the school’s students. At this writing, 100 percent of HCT students have brought GLOCK pistols to class.

That’s just fine with Reichert. “We like the GLOCK because it’s simple to use,” says Reichert. “We teach our students that they are the safety, not a lever on the side of the pistol.”

“The types of shooting we do at HCT require students to hit multiple small, moving, reactive targets under human reaction times,” he says, further explaining the paradigm shift away from the old standby. “The heavy-recoiling, limited-capacity 1911’s can’t keep up with the low-recoil, high-capacity polymer guns. Since handgun rounds only poke holes in people, we like to use pistols that allow us to poke holes where we want them, as fast as needed, without changing magazines every seven rounds.”

The folks at Personal Tactics seem to agree. The school, located outside of Atlanta, has a curriculum designed and taught by Wilson, a current law enforcement officer, former Recon Marine and Atlanta policeman who also holds a black belt in jujitsu. His school combines elements taken from such diverse sources as the aforementioned jujitsu to German GSG 9, British SAS and South American bodyguards.
While he has an extensive military and law enforcement background, Wilson’s students may most benefit from the fact that he has survived multiple lethal civilian confrontations. Four of his opponents were not so fortunate.

Those experiences allowed him to create the Personal Tactics curriculum from the ground up to be the ideal training for the armed civilian looking to protect him- or herself in a hostile world. Wilson’s former students are 16-0 in gunfights, without any having been prosecuted.

Personal Tactics Advanced Class teaches how to get separation from an assailant prior to the draw. It then revisits basic marksmanship before going into shooting from different positions, shooting from cover, shooting on the move and even teamwork. Wilson obsesses over the worst-case scenario (which is just what combat shooting is) and therefore malfunction drills are a large part of the course.
He has earned a growing reputation as a gifted instructor, one who concocts innovative drills to place stress on his students, making sure they can perform essential tasks under pressure. Wilson conducts all of his handgun classes using his trusty GLOCK 19. In fact, all Personal Tactics instructors carry GLOCK 9x19s.

GLOCKs are the most frequently seen gun among students, too. “I would say 85 percent of students that we see coming to our classes have the GLOCK pistol in either 9×19 or .40, full-size to the subcompact,” says Wilson. In fact, when a student calls ahead to say he or she doesn’t have a gun, Personal Tactics will loan the student a GLOCK. “We selected the GLOCK as our loaner gun because it is reliable and user-friendly,” explains Wilson; “Not a whole bunch of gadgets on it that may confuse new shooters or seasoned ones.”

Citing the reasons for the general appeal of Austrian-made polymer gun that has so changed American handgunning, Wilson ticks off a whole list of virtues: “Easy to maintain—you can get parts for it anywhere. Goes bang every time you pull the trigger. Again, user-friendly—not a complicated pistol. Holds lots of bullets, which is a plus in a confrontation, especially if you are alone or your friends may not be carrying.”

The virtue of the GLOCK pistol was demonstrated to me as I observed a recent Personal Tactics Advanced Class conducted at the South River Gun Club in Covington, Georgia. A student arrived with a highly regarded gun from another manufacturer. However, he opted to purchase ammunition for the course from Personal Tactics rather than lugging his own from two states away. The problem was his gun was not functional with that ammunition.

The gun malfunctioned every second or third shot. When he tried it with the small amount of his carry ammunition he had with him, it was fine. Watching him having to constantly put the gun back in battery was painful. Worse, there was just no way he was going to complete a course of the intensity of Personal Tactics’ with a balky gun/ammo combination. Finally, I approached Wilson and said, “I have my GLOCK and a Galco rig in the car, if he’d like to use it.”

“The problem’s the ammunition,” remarked Wilson. “Yeah,” I said, “but it’s a GLOCK.” Wilson nodded, knowing what I meant. I went to the car, got the gun, spare magazines and leather, and handed it to the gentleman. He did not have a single malfunction for the rest of the course—which spanned another day and a half. That incident provided a valuable lesson on the merits of the GLOCK—or rather it should have. But at shooting schools today, you are likely preaching to the converted.

For more information, visit HCT at hicaltraining.com and Personal Tactics at personaltactics.com. 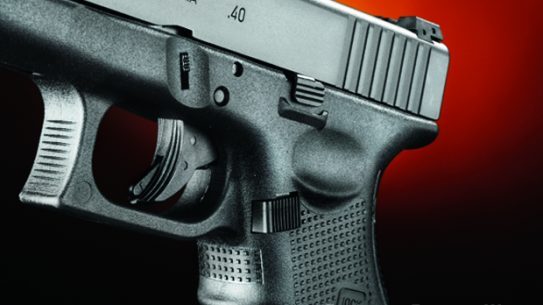 The deep-cover Glock 26 and Glock 27 subcompacts get the newest of the Glock...