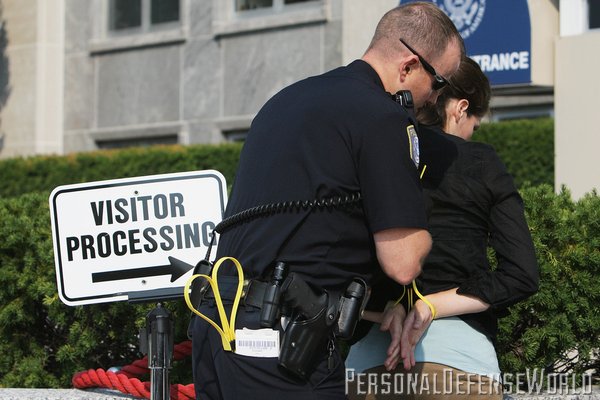 1 of 1
Police arrest a protestor outside of the 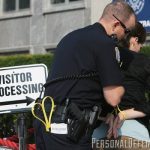 Since becoming the capital of the United States, the District of Columbia has seen significant growth. It has developed into a metropolitan region extending well into adjoining Maryland and Virginia. This multi-jurisdiction region is known collectively as the National Capital Region.

Comprehensive cooperation and planning are conducted on a regional basis between federal, state and local governments in the interest of the common good. This is particularly important when it comes to law enforcement and homeland security concerns. In addition to the normal challenges of policing a large metropolitan area, law enforcement agencies in the area must also work together to guard against terrorist threats and prepare for other contingencies that are unique to the Nation’s Capital. GLOCK pistols serve with various agencies within the National Capital Region. This is a true testament to the fact that GLOCK pistols offer the most important characteristics that are required by police, special units and security services assigned to important tasks.

The Metropolitan Police Department is the primary law enforcement agency for D.C. and is one of the nation’s largest police forces. Since being founded in 1861, the D.C. Metro Police have worked to safeguard the capital and protect its residents and visitors by providing the highest quality of police services. Today, the MPD employs more than 4,400 members, which include around 3,800 sworn police officers and more than 600 civilian employees. Nearly one in four of all sworn officers are females and a high percentage of sworn members are African American, Hispanic or Asian, which closely reflects the demographics of the District of Columbia population they serve. All Metropolitan Police officers carry the GLOCK 17 9×19.

Because of its presence in the Nation’s Capital, the MPD plays a unique role in protecting the nation’s government. D.C. Metro officers provide support for high-profile events like presidential inaugurations, national parades and marches. As a result, the Metropolitan Police have become experts in crowd management and security. They also work closely with federal agencies like the U.S. Secret Service, U.S. Park Police, Supreme Court Police, U.S. Capitol Police and many others to protect government personnel and infrastructure. They work closely with the various foreign police, military and security services that protect embassies and other diplomatic venues located within the District of Columbia.

The heart and soul of the Metropolitan Police Department is the Patrol Services and School Security Bureau. This bureau manages the police officers assigned to Patrol, Patrol Support Division, School Safety Division, Special Liaison Units, Central Prisoner Processing, and the Community Services and Youth Outreach Division. The Patrol Services and School Security Bureau work closely with the public to build and sustain safe neighborhoods and reduce crime. The Metropolitan Police selected the GLOCK 17 in 1988 so officers would have the advantage of its reliability and ammunition capacity of 17 cartridges in the standard magazine. This was a significant improvement over the department’s legacy revolvers, which only held six cartridges.

The Metropolitan Police have a number of specialized units that carry out critical assignments. The National Capital Region has an important maritime aspect. Harbor Patrol units police all of the rivers, inlets and waterways that surround the Nation’s Capital. Harbor Patrol officers encounter the same types of incidents that occur on D.C. streets, including disorderly conduct, loud music, domestic violence, robberies and high-speed chases. Officers also oversee marinas, regulate fishing and hunting, ensure boats are safe and meet regulations. Harbor Patrol’s main priority is to provide assistance if anyone gets into trouble on the water. The most common occurrences are capsized canoes or boats. There are also many roadways that run beside the waterways and motor vehicles sometimes plunge into the water. A dive team performs water rescues from cars and boats submerged in water.

The Special Tactics Branch maintains the relationship between federal and municipal governments in civil defense matters and provides on-duty manpower for rapid deployment to crowd management situations, disasters and unusual occurrences. Special Tactics Branch bomb technicians examine, deactivate and dispose of incendiary or explosive devices. Special Tactics Branch also responds to all barricaded suspects, hostage situations, terrorist incidents and provides trained personnel to resolve such situations. When requested, the Special Tactics Branch also supports the U.S. Secret Service in the protection of foreign missions and embassies. Special Events Branch plans, coordinates and develops operational orders, allocates manpower, and lizises with outside agencies for special events, parades, demonstrations and other incidents occurring in public or of a public nature. This branch also coordinates with the Secret Service in planning, developing and executing escort and security for the President and Vice President and other high-profile officials.

The City of Alexandria, Virginia, maintains a modern, highly trained, technically skilled and well-equipped police department. With a current authorized strength of 320 sworn police officers and 138 civilian employees, the Alexandria Police Department provides professional service to residents, visitors, and businesses within the city. The APD has designed and implemented a program called the Strategic Response System, or SRS. The SRS combines technology, innovative tactics and strategies, and accountability to reduce crime and the fear of crime across the city. Alexandria police personnel use crime analysis data to respond proactively and effectively to new and emerging criminal trends. SRS-involved staff are educated in regard to using, interpreting and accessing crime analysis data in order to develop strategies that respond to identified issues in the community.

The Patrol Operations Bureau provides the most visible police services to the community. Officers assigned to this bureau respond to emergencies, alarms, reports of crimes, calls for service and provide traffic enforcement. Their standard pistol is the GLOCK 23. The compact dimensions for open and concealed carry make the .40-caliber GLOCK 23 an excellent duty weapon choice as well as making it ideally suited for off-duty carry.

A Vice and Narcotics Section is also assigned to the Investigations Bureau. The Section consists of a Narcotics Unit, Vice Unit, Intelligence Unit and several detectives assigned to Federal Task Forces. The Narcotics Unit conducts investigations designed to target and deter middle- and upper-level drug and vice operations within the city. Several members have cross-jurisdictional authority to combat drug and vice operations at a federal level.

Special Operations Team (SOT) members are highly trained officers who employ the very best in firearms, protective gear and other tactical equipment. Operators assigned to the Special Operations Team carry the full-size GLOCK 22. They chose the GLOCK 22 because of the increased sight radius and the increased barrel length, which leads to a higher degree of accuracy. The GLOCK 22 also offers a standard 15-round magazine capacity of .40-caliber cartridges. The SOT responds to barricaded suspects and hostage incidents, and is prepared to deal with violent criminal and terrorist situations in close cooperation with other agencies in the National Capital Region.

Montgomery County is located on the northwestern border of Washington, D.C., and has a land area of 495 square miles. It is an essential part of the National Capital Region as several federal agencies, as well as important military commands, have made the county their home. The National Institutes of Health, Food and Drug Administration, Department of Energy, Nuclear Regulatory Commission, NASA Goddard Space Flight Center, Naval Surface Warfare Center-Carderock Division, National Naval Medical Center, and the National Geospatial-Intelligence Agency are just a few examples of the agencies located in Montgomery County. Although highly developed, Montgomery County also has a scenic, rural side thanks to a 93,000-acre Agriculture Reserve. Established in 1980, the Agriculture Reserve is the home of 561 farms and 350 horticultural enterprises.

Headquartered in the county seat of Rockville, the Montgomery County Police are one of the key law enforcement agencies that serve and protect this diverse community. Montgomery County Police make extensive use of GLOCK pistols. In 2002, the MCPD began to experience a limited number of failure-to-fire incidents with another manufacturer’s handgun. A committee determined the root causes of the problem and recommended a department-wide transition to GLOCK pistols chambered in .40 caliber. The firearms staff developed a GLOCK handgun transition course, which incorporated safety elements and GLOCK nomenclature. Transitioning to the new GLOCK pistols began in early 2003. Other agencies, such as the Montgomery County Office of the Fire Marshal and the Montgomery County Sheriff’s Office, also transitioned to GLOCK pistols. Over 600,000 rounds of ammunition were expended during this transition period. Pistols used by the MCPD and other county agencies include the .40-caliber full-size GLOCK 22 Gen4, the compact GLOCK 23 .40-caliber, the subcompact GLOCK 27 .40-caliber and the GLOCK 21 .45 AUTO. GLOCK pistols in use typically come equipped with tritium night sights and New York 1 trigger springs. The GLOCK New York 1 (NY1) gains its name from New York Law Enforcement agencies which were the first to specify an increase in trigger pull weights to 8+ pounds from the 5.5 pound trigger pull weight which is standard in GLOCK pistols.

The Special Operations Division is composed of the Police Community Action Team, Canine Unit, SWAT Team, and Project Lifesaver. Police Community Action Team officers are assigned to areas with the potential of higher crime. Not only do they provide a highly visible police presence in specifically targeted areas, but they also attend community meetings and form relationships with residents to address community issues.

The Police Canine Unit is made up of 20 officers and 27 dogs. The County uses a variety of dog breeds including German Shepherds, Labrador Retrievers, and Bloodhounds to track and locate suspects and lost persons and to detect drugs and explosives. SWAT officers perform hostage rescue operations, provide security for visiting dignitaries, resolve situations involving barricaded subjects, provide assistance on high-risk arrest warrant service, and assist with any other critical incidents. Project Lifesaver is a proactive response by the MCPD to identify individuals within the community who have a propensity to wander and not be able to return home, such as people suffering from Alzheimer’s disease and the mentally impaired. Once identified, these individuals are equipped with a tracking bracelet so that, in the event they are missing, police, using specialized equipment, can locate them in a timely manner.

The Montgomery County Police, along with the D.C. Metropolitan Police and Alexandria Police Department are key participants in providing law enforcement and homeland security services to the National Capital Region. Being equipped with GLOCK pistols ensures that their officers have a sidearm that will function without compromise, even under the most extreme conditions. 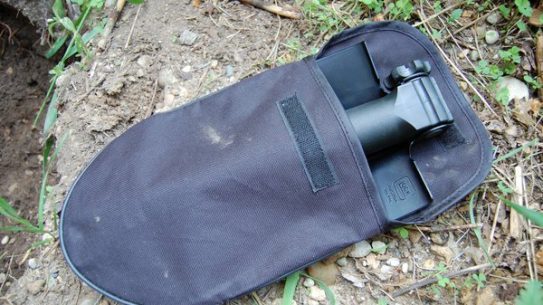 Since becoming the capital of the United States, the District of Columbia has seen…