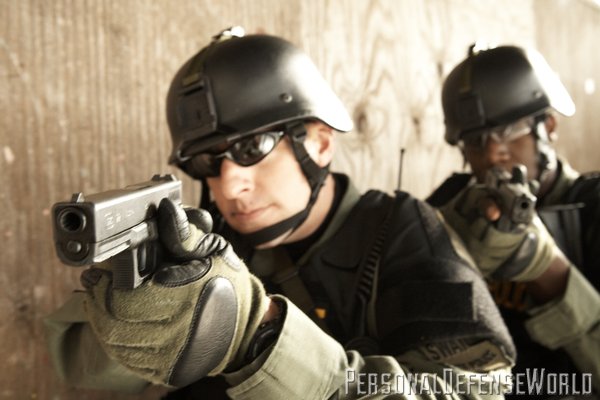 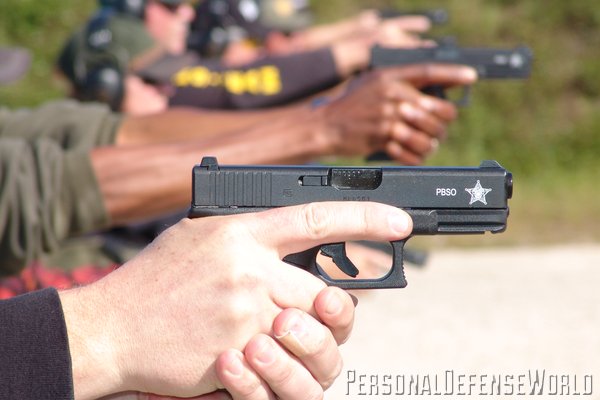 2 of 6
Palm Beach FL- Dall’au DSC00199 copy_phatchfinal
Every Palm Beach Sheriff’s Office G22 and G23 has the PBSO star on the slide and a micro-etched groove in its barrel to ensure that every bullet fired can be matched to a specific weapon. 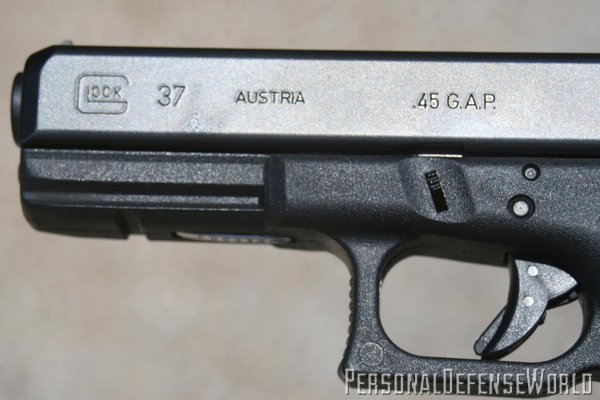 3 of 6
Reg_06_phatchfinal
Chambered for .45 G.A.P., the GLOCK 37 seems to be more popular on the Eastern seaboard than elsewhere. 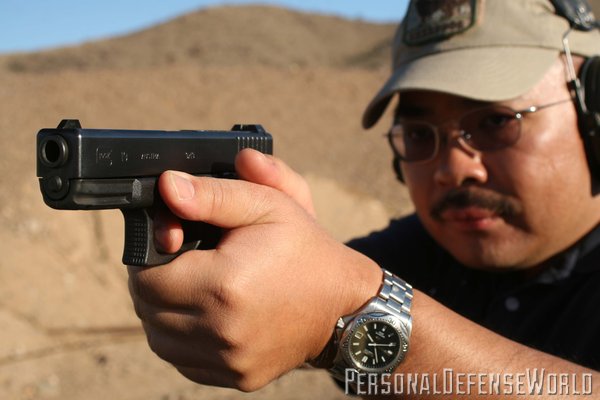 4 of 6
Reg_07_phatchfinal
Tucson, Arizona, firearms instructor Phil Wong lines up his GLOCK 19. The 9×19 is particularly popular among private citizens in warmer parts of the country. 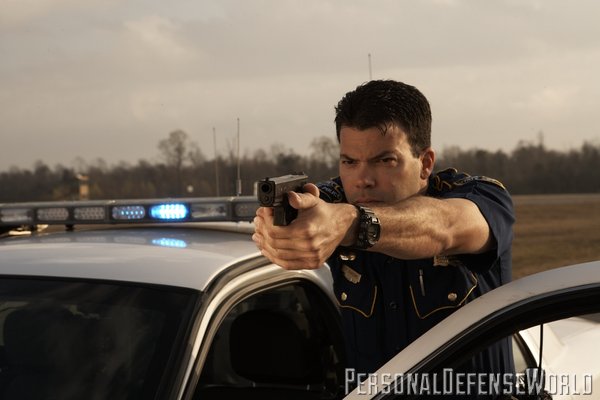 5 of 6
LOUISIANA STEVE WOODS LST_GLOCK_2-187 copy_phatchfinal
The G22 .40-caliber is the standard issue pistol for the Louisiana State Police. 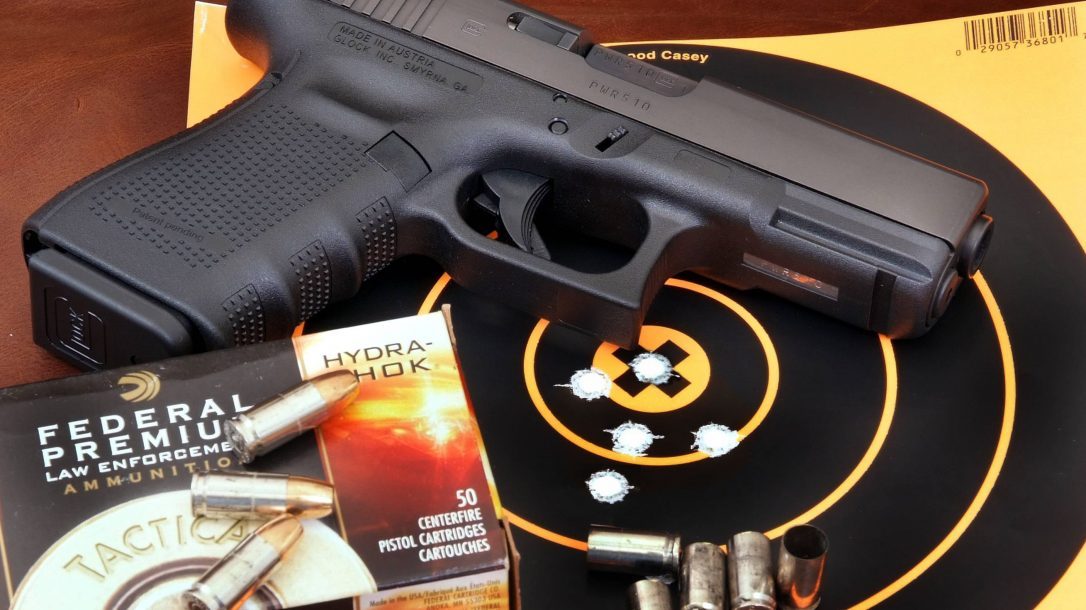 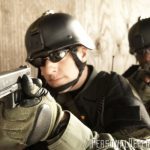 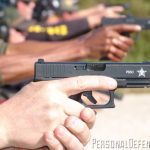 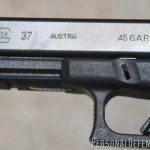 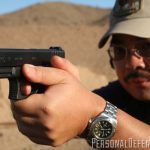 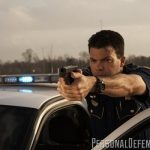 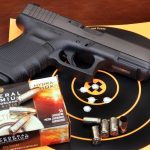 GLOCK is the most popular law enforcement pistol in the United States. Interestingly, there are regional trends to be seen if you look carefully for them. Not huge lines of demarcation, mind you, but subtle indications that certain models are more popular in certain parts of the country.

The GLOCK 17 9×19 recently celebrated its 25th anniversary in the United States. Departments all over the country use it, and it’s hugely popular among the shooting public nationwide. The G17 is the standard-issue pistol for the Indiana State Police, and is optional (the other choice being the .40-caliber G22) for the Louisiana State Police. The GLOCK 17 is also the standard-issue pistol for graduates of the city of Chicago’s Police Academy, though after their first probationary year is complete, they can purchase their own GLOCKs in .40 or .45 Auto for duty use if they choose.

The New York City Police Department is the largest user of 9×19 GLOCKs. The GLOCK 19 is, by far, the most popular of the three makes/models authorized by the NYPD for uniformed wear. Its design is equally suitable for open wear in a Level II uniform security holster, and for concealed carry by detectives and off-duty personnel. Also authorized for plainclothes wear is the little GLOCK 26 in the same caliber, which will function with longer magazines. Not surprisingly, it is a very popular adjunct gun with NYPD. The issued load for the city is the Speer Gold Dot 124-grain +P bonded hollow point, which has performed remarkably well “on the street.”

The bottlenecked .357 round in an auto gives a flat trajectory with high velocity and excellent tactical penetration. Its popularity tends to be very regional. There are enclaves where it is hugely popular—Virginia, for example, and Texas. Two advantages of this cartridge that are often cited by agencies are the ability to pierce intermediate targets and their excellent long-range potential.

New Mexico state troopers still talk about their member who killed a charging black bear with a single shot from his issued G31. A Tennessee police commander told me of a case where a lawman there dropped a gunman with a single shot from his department-issue GLOCK 31 at a distance of more than 70 yards. Tennessee state troopers have long been issued the G31 and appreciate its attributes when they are alone in dangerous situations that might involve long ranges in mountain hollows, or felons barricaded in automobiles. The compact G32 and subcompact G33 in this caliber add to the versatility of a GLOCK chambered for .357.

The “all-American” .45 Auto cartridge is very popular in the GLOCK line. The state police of Arkansas, Idaho and Kansas issue the GLOCK 21. San Bernardino County, the largest county in the lower 48 states, issues the GLOCK 21 for uniformed patrol deputies and the compact GLOCK 30 for detectives and supervisors. To cover all bases, the SBSD will issue a GLOCK 17 in 9×19 for deputies who prefer its smaller grip girth or its milder recoil.

The FBI, DEA, U.S. Marshal Service and several other federal law enforcement agencies issue GLOCKs in this caliber. The GLOCK 22 is standard issue for lawmen in frigid climates such as Fairbanks, Alaska, and the Alaska State Troopers. It will also be found among officers in the hottest areas: the G22 is standard issue for the Phoenix, Arizona, and the Miami, Florida, police departments.

Police departments have long had to consider the confidence factors of their personnel, some of whom were inclined toward 9x19s for their high capacity, and some toward the .45 Auto for its perceived greater “stopping power.” The .40 cartridge is big enough to satisfy the perceived needs of the large-caliber advocates, while the GLOCK 22’s 15+1 payload of .40-caliber cartridges delivers an onboard round-count that was available only in 9×19 pistols before the coming of the GLOCK.

The compact G23 in .40 caliber is standard issue for some departments, such as Boston PD, for the same reason the identical-size G19 in 9×19 was chosen by the NYPD: it’s a size equally suitable for open wear in a uniformed holster and concealed carry. The “Baby” GLOCK version, the GLOCK 27 .40-caliber, is hugely popular for plainclothes wear among police and private citizens with CCW permits alike.

Though the 9×19 seems to be the most popular GLOCK caliber in the civilian sector, a great many .40-caliber GLOCKs are also bought by citizens. Like cops, they appreciate a caliber that gives them a middle ground between 9×19 and .45 Auto in terms of power balanced with cartridge capacity.

The fifth and most recent GLOCK chambering available in the U.S. is a true 21st century cartridge, the .45 G.A.P. This round has established a definite regional preference aspect: it is seen primarily among Eastern seaboard police departments. New York State Police were the first to adopt it and have proclaimed themselves totally satisfied since. The Pennsylvania State Police now issue it and, in the Southeast, you’ll find three contiguous states whose troopers all wear the GLOCK 37 .45 G.A.P.: South Carolina, Georgia and Florida. All report satisfaction with the round. Georgia issues each sworn member of the State Patrol a seven-shot “Baby” GLOCK 39. Florida Highway Patrolmen are buying the compact-size GLOCK 38 for off-duty wear in droves.

The .45 G.A.P. was created in a joint venture between GLOCK and Speer expressly to put .45 Auto ballistics into a shorter round that would fit into the smaller girth of the standard-size GLOCK frame without requiring the larger frame of the GLOCK 21 series. The .45 G.A.P. concept proved to be very successful in this regard.

Are GLOCK preferences regional? To some extent yes, to some extent no. The .40-caliber GLOCKs in particular seem universally popular. “Regionality” is seen to some extent with the .357 and .45 G.A.P. versions, at least among police. In any case, the question seems academic. Individual need and preference will trump local trends. That’s why GLOCK offers its range of sizes and calibers. 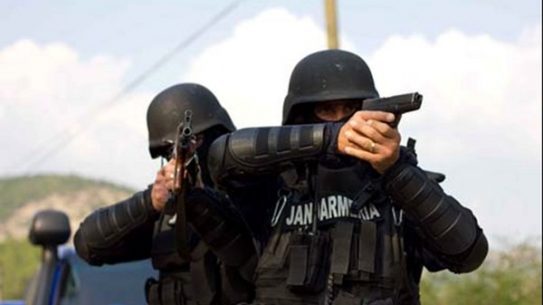 GLOCK is the most popular law enforcement pistol in the United States. Interestingly, there…