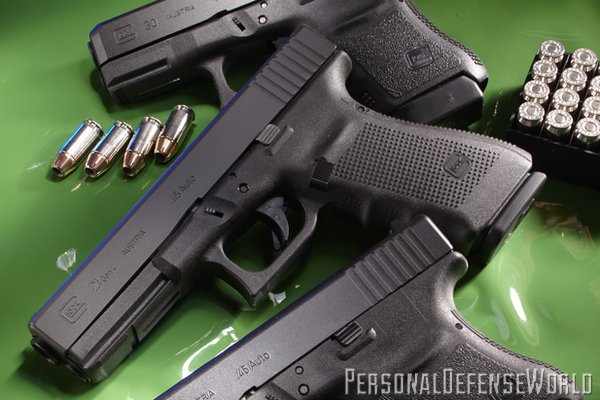 1 of 6
Glock 21 Gen4_36_30 2007_phatchfinal
“Over the years, GLOCK engineers have monitored the performance of all their pistols, tweaking them for better performance, and the G21 is no exception.” 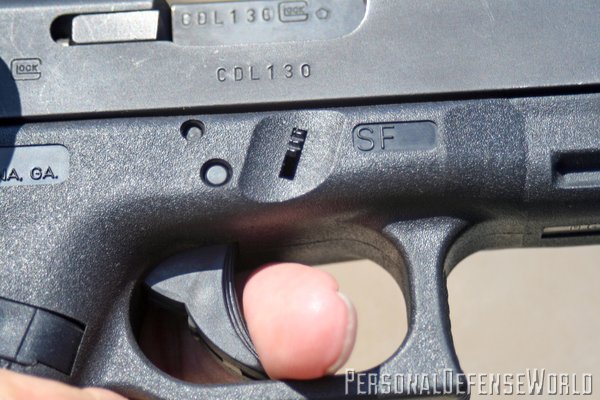 2 of 6
G21_07_phatchfinal
Shorter trigger reach on this GLOCK 21 SF allows “more finger on the trigger” without sacrificing proper hold. 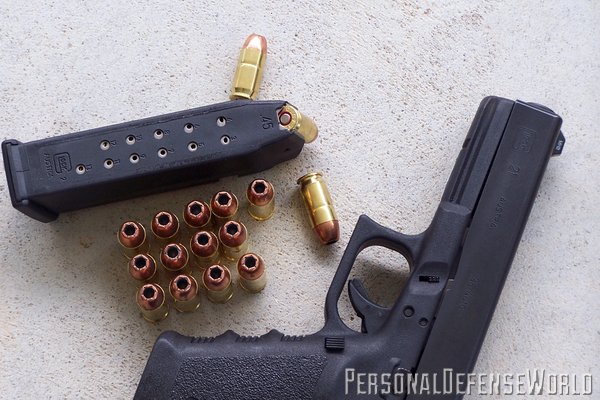 3 of 6
G21_01_phatchfinal
In-gun capacity of 13+1 rounds of .45 AUTO, plus GLOCK ergonomics and reliability, made the G21 hugely popular in American police service. 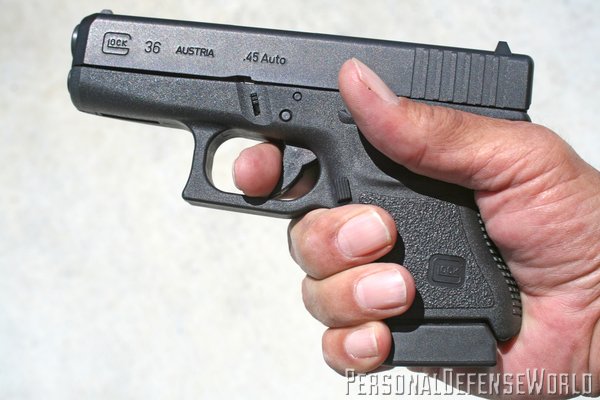 4 of 6
G21_06_phatchfinal
With a single-stack magazine, the little G36 is GLOCK’s smallest .45 AUTO, and has the slimmest grip girth. 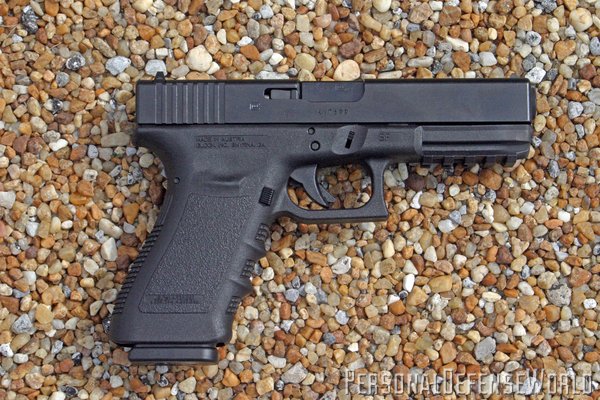 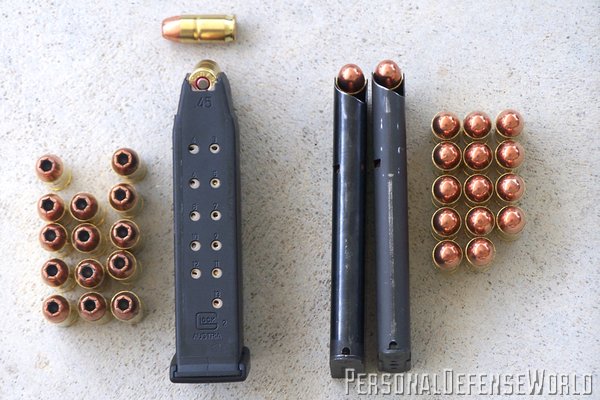 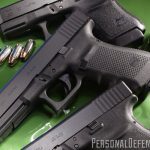 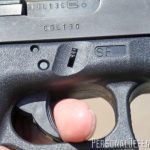 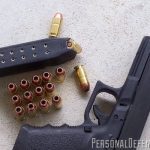 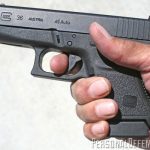 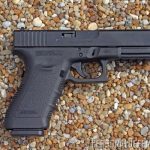 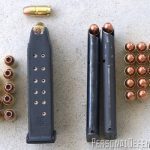 The .45 AUTO cartridge became available circa 1905 and was immediately recognized as a potentially excellent man-stopper. Six years later, Colt’s Manufacturing developed an extremely effective platform, the 1911 pistol. Texas Rangers quickly voted with their wallets, and it has been hugely popular in their ranks ever since. During the Depression years, other members of law enforcement found the .45 AUTO ideal for their work. Special Agent Charles Winstead used one to shoot and kill Public Enemy No. 1, John Dillinger, in Chicago in 1934.

For most of the 20th century, however, the six-shot service revolver stubbornly hung on. In 1967, Illinois State Police became the first large agency in the country to arm its personnel with an autoloader, the S&W Model 39 in 9×19, which would be replaced before the turn of the next century by the GLOCK 22 .40-caliber. By the mid-1980s, the .45 AUTO was at last gaining traction with police in the form of double-action semi-autos with single-stack magazines.

During that period, the GLOCK 17 9×19 pistol made its debut in the U.S. Its adoption by St. Paul, Minnesota, and Miami, Florida, police set the stage for the marketing upset that would soon see the GLOCK brand become the most popular law enforcement handgun in America. Eighteen rounds of 9×19 ammunition made the G17 desirable indeed, but there were many in U.S. law enforcement who clamored for a GLOCK chambered for the .45 AUTO cartridge.

I learned of the new .45-caliber GLOCK in 1990, and several months later, GLOCK introduced the G21. In appearance and design, it was a GLOCK 17 on steroids, scaled up slightly to work with the .45 AUTO cartridge. The larger frame was necessary to allow GLOCK to produce a pistol chambered for the 10mm Auto, the functionally identical GLOCK 20, which appeared on the market earlier, in 1990. With the narrower 10mm cartridges in its magazine, the GLOCK 20 could hold 15 rounds there, and one in the chamber.

The GLOCK 21 was designed around a 13-round magazine, and of course was safe to carry with another .45 AUTO round in its chamber. The G21 was an instant hit with American law enforcement. It’s not hard to understand why.

From 1911 to 1985, when it was replaced by a 9×19, the M1911 military service pistol had been carried chamber-empty by most troops, with a magazine of seven .45 rounds locked into its butt. The 14-round GLOCK 21 doubled that capacity with the same powerful ammunition, and the patented GLOCK SAFE ACTION® mechanism made it perfectly safe to carry with a round chambered. A soldier with the quintessential American .45 Auto was generally required by regulations to rack the slide before he could fire the first of his seven .45 rounds; a cop with a GLOCK 21 had only to draw and pull the trigger to unleash a stream of 14 of the same big slugs.

There is another advantage: a G21 weighs only 26.4 ounces with its polymer GLOCK frame compared to 39.5 ounces for an all-steel 1911, with both guns weighed unloaded. At the end of a long patrol shift, that makes a lot of difference to a police officer also burdened with a radio, baton, handcuffs, Taser, spare ammunition and other gear.

Getting to Know the G21

The big new pistol set a high watermark for GLOCK accuracy. In other calibers, a GLOCK’s polygonal rifling will have six sides. The .45s, however, have an eight-sided bore. It is not at all uncommon to see a G21 group five shots into 1.25 or 1.5 inches with the best .45 AUTO ammunition.

Over the years, GLOCK engineers have monitored the performance of all their pistols, tweaking them for better performance, and the G21 is no exception. It is one of the most reliable .45 AUTOs you can buy today. The G21 is probably the most popular single .45 AUTO in police service.

Officers come to this gun by different routes. One friend, an Illinois police officer, had to shoot and kill a violent armed man to save himself and his brother officers. It took 17 rounds of 9×19 from another brand of pistol to stop the aggressor. This officer went out and bought a 14-shot GLOCK 21, loaded it with .45 AUTO hollow points, and carried it as a privately-owned/department-approved service pistol for the remainder of his distinguished career.

The Anchorage, Alaska, Police Department long ago settled on the GLOCK 21 as its standard-issue service pistol. A high-capacity .45 AUTO makes huge sense in a climate where, for much of the year, an opponent can be expected to be wearing heavy winter clothing, which has potential to plug any hollow point and turn it into ball ammunition. History indicates that larger-caliber bullets tend to be more decisive “man-stoppers” when the projectiles aren’t going to expand. These .45 AUTOs aren’t just for arctic climates. Arkansas gets pretty warm. State troopers there are issued the GLOCK 21. So are the troopers of Idaho and Kansas.

A large-frame GLOCK with a 4.6-inch barrel is more gun than some folks can comfortably and conveniently wear concealed. Around 1997, GLOCK supplemented the G21 with the GLOCK 30. The new gun was, in essence, a G21 shortened at both grip and muzzle, with a standard magazine of 10 rounds and an extra .45 AUTO cartridge in the chamber. Design parameters included the double captive recoil spring assembly that had proven so successful with smaller caliber “Baby” GLOCKs introduced a couple of years before, and the ability to work with the longer 13-round magazines of the GLOCK 21.

The G30 turned out to be even more accurate than its big brother, probably because the shorter barrel/slide assembly was proportionally more rigid, and also perhaps because the double captive spring guarantees that the bullet will be out of the barrel before the gun begins to unlock.

In turn, the G30 begot the SLIMLINE® GLOCK 36, a .45 AUTO with a single-stack magazine. A G36 holds six rounds in the magazine plus one more in the chamber.

In 2007, GLOCK introduced yet another answer for those with small hands: the SF (Short Frame) treatment. The grip frame on this variation is dimensioned smaller front to back, allowing the officer to “get more hand around the gun, and more finger on the trigger.” The GLOCK 21 SF and GLOCK 30 SF have become hugely popular. The same treatment has carried over to the 10mm AUTO models, in the G20 SF and G29 SF.

The first G21 SF, in preparation for anticipated testing for a new .45-caliber pistol by the Special Operations Command, was fitted with an aggressive Picatinny rail and ambidextrous magazine catch. It was followed by another variation with an ambidextrous magazine catch and GLOCK’s standard light rail configuration. Because the additional magazine catch kept the guns from fitting police duty holsters for standard G21s, GLOCK offered a third variation of the G21 SF, with standard GLOCK light rail and conventional magazine catch on the left side only. This has turned out to be the most popular variation of all in the G21 line, eclipsing sales of even the original GLOCK 21.

Another approach to putting .45 AUTO potency in a smaller, more easily grasped pistol was GLOCK’s joint creation with Speer of the .45 G.A.P. (GLOCK AUTO Pistol) cartridge. The .45 G.A.P. is available in the full-size GLOCK 37, the compact G38, and the subcompact G39.
The most recent evolution is the G21 Gen4. The Gen4 treatment, introduced in 2010, includes a shortened grip frame with a shorter reach to the trigger, combined with backstrap inserts that can make that dimension a little larger or significantly larger if needed to fit a more larger-handed user. An enlarged and reversible magazine catch is also part of the Gen4 package.

Why a GLOCK .45 AUTO? The answer lies in one word: power. The designation “.45” has been synonymous with powerful handguns in this country since the single-action revolvers of the 19th century. Many experts remain convinced that the .45 AUTO is an optimum defensive choice for this reason.

In San Bernardino, geographically the largest county in the contiguous U.S., then-Sheriff Gary Penrod listened earnestly when his deputies questioned the “stopping power” of the 147-grain subsonic round in SBSD’s issued GLOCK 17s. When a poll of the troops indicated that a majority wanted .45 AUTOs, the sheriff adopted the GLOCK 21. Confidence surged. In one shooting, a deputy dropped a killer with a single 230-grain Winchester hollow point from his G21. In another, a gunman took a shotgun blast to the belly and stayed in the fight, but collapsed and surrendered when a Winchester Ranger 230-grain +P .45 AUTO round hit him in the shoulder. In the hospital later, he told an investigator that the blast of 00 buckshot had been no fun, but said that the shoulder wound with the .45 AUTO “tore my arm off” and was so excruciatingly painful that he couldn’t continue. Surgeons were forced to amputate the arm.

In Live Oak, Florida, the county seat of Suwannee County, both the city police and the sheriff’s department issue the GLOCK 21. One deputy had to quick-draw and fire from the hip at a criminal who came at him with a knife. His 230-grain Speer Gold Dots dumped the knife-wielder on his butt. At the hospital, one nurse commented that a .45 AUTO wound in the would-be cop-killer’s arm was “the size of her fist.”

Of course, no handgun bullet is a guaranteed death ray. In another incident, the involved officer had to shoot an armed and dangerous suspect nine times with 230-grain Gold Dot before the man dropped his weapon and died from a head shot. The high capacity and shootability of his GLOCK 21, in that case, had allowed the involved officer to keep up a drumbeat of accurate fire until he finally won the gunfight. Wounded early in the shootout and faced with a crafty opponent who knew how to move and take cover, the lawman had emptied two double-stacked GLOCK magazines and most of his third and last one when a deliberate head shot dropped the attacker. With an eight- or nine-shot older-style .45 AUTO, and the same standard complement of two spare magazines, instead of the GLOCK 21, that incident might have had a much more tragic outcome.

The Los Angeles Police Department first issued the GLOCK to its Special Investigations Section (SIS), a high-risk felony squad. They chose the GLOCK 21 because, after many gunfights, that unit had come to trust the .45 AUTO round. LAPD later adopted a smaller GLOCK for standard issue at the academy level, but made the .45-caliber G21 an option for all its sworn officers, and it has become hugely popular there.

Whether bought out of their own pockets by survival-aware cops who want the maximum combination of round-count and power, or issued by the department, the GLOCK 21 has become the most widely seen make and model of .45 AUTO pistol in police holsters around the U.S. Fourteen rounds of powerful .45 AUTO ammunition is a reassuring thing for those who go in harm’s way to protect the public. 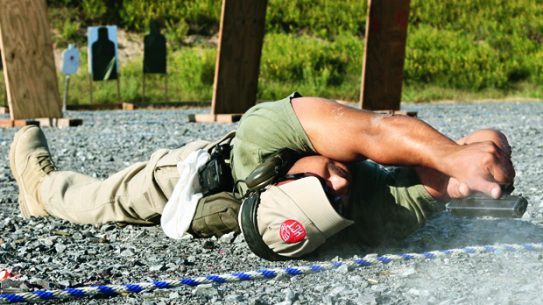 The Teacher’s Choice: GLOCK as the New Standard

The .45 AUTO cartridge became available circa 1905 and was immediately recognized as a…