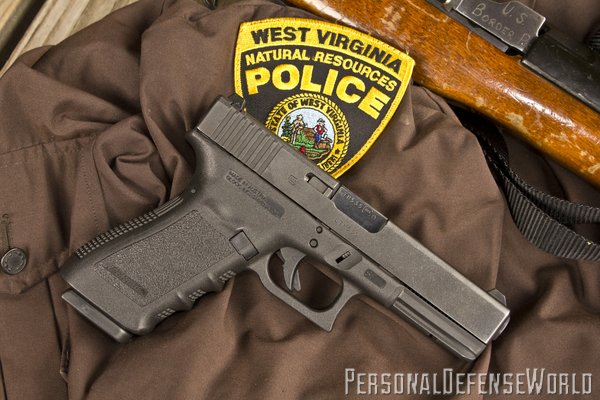 1 of 7
WV DNR (8)_phatchfinal
All the game wardens in West Virginia will now be carrying a new duty pistol: the GLOCK 21 SF in .45 AUTO. 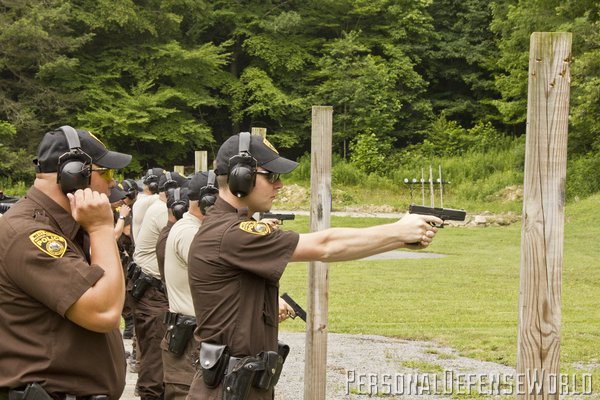 2 of 7
WV DNR (22)_phatchfinal
The game wardens of the West Virginia Division of Natural Resources are ecstatic with their department’s selection of the GLOCK 21 SF as a duty pistol. Officers are shooting better and have more confidence in their ability. 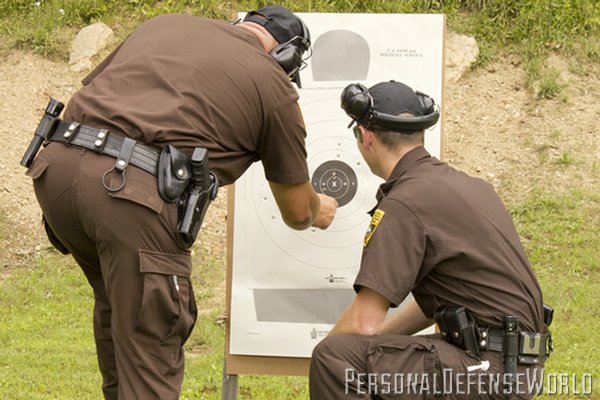 3 of 7
WV DNR (20)_phatchfinal
West Virginia DNR officers on the range during a training session. According to Division firearm instructors, their qualification scores are higher than they have ever been. 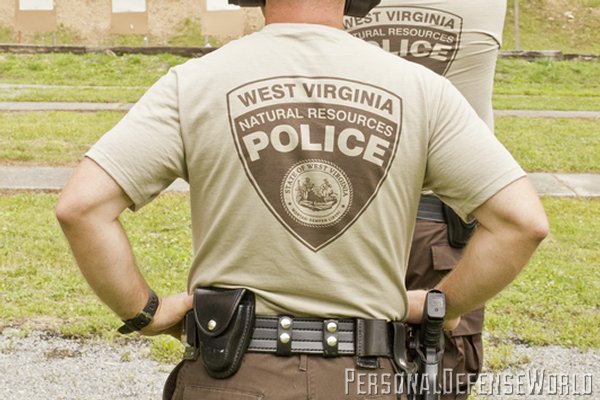 4 of 7
WV DNR (18)_phatchfinal
The West Virginia DNR officers are shooting better with the GLOCK and have no negative safety-related issues. 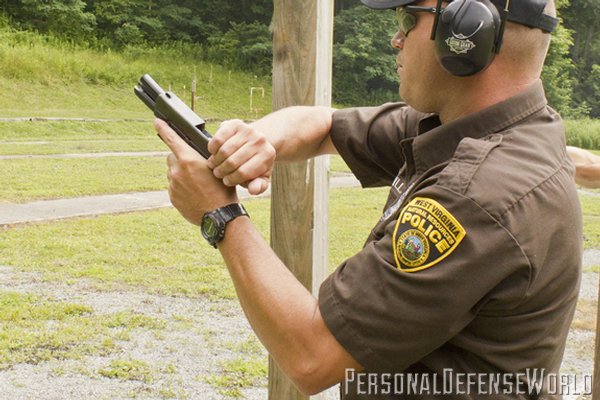 5 of 7
WV DNR (17)_phatchfinal
One advantage the GLOCK 21 SF offers law enforcement agencies is its fit to almost any size hand. 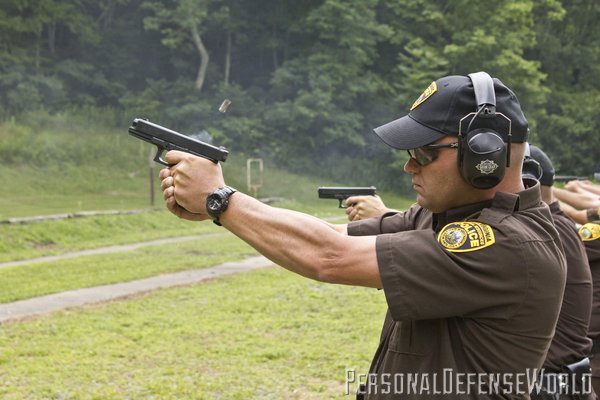 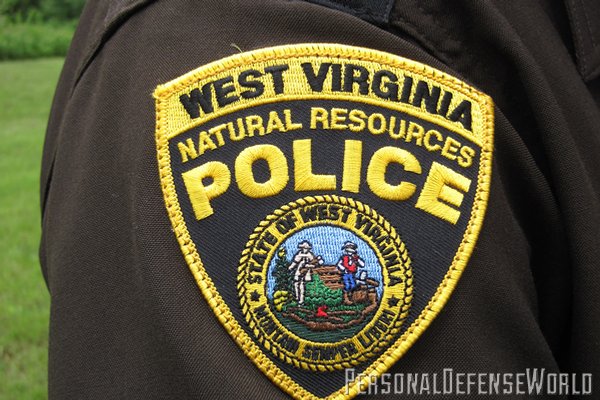 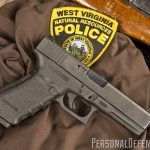 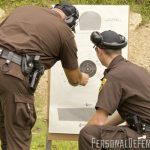 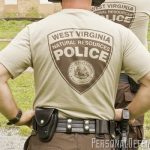 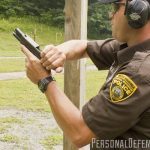 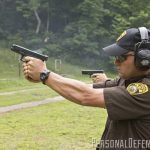 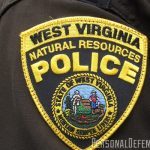 It could be argued that the most dangerous uniformed law enforcement profession is that of a game warden. Why? It’s simple really. Almost everyone a game warden encounters during an investigative situation is armed, and most confrontations occur in remote locations—where there are no witnesses and where backup is something you wish for—like winning a lottery ticket.

The fact that most gun owners are law abiding citizens, including hunters and outdoorsmen, has to be one of the main reasons game wardens do not face more lethal threats than they do. Most of the criminals game wardens deal with either misunderstood the regulations, tried to start hunting season early or endeavored to take home more game than allowed.

Members of the law enforcement section of the West Virginia Division of Natural Resources (DNR) are considered Natural Resource Police Officers. Hillbillies like me call them “game wardens.” They are, in fact, the oldest law enforcement agency in the state. I have several acquaintances that are West Virginia game wardens and all believe in private gun ownership and hunting. They’re also dedicated to protecting the natural resources of our state. To do so properly, these brave men and women need adequate equipment. And, like with any other law enforcement officer, they need a reliable sidearm.

Not only do West Virginia game wardens have to worry about bad humans—they’re constantly being confronted with wild critters. Some are nuisance-type critters, specifically bears, marauding trashcans. Others can be rabid raccoons or domestic pets, wounded deer or about any other animal problem you can dream up. All can be potentially dangerous, especially considering that about all game wardens have to rely on is their gear and their wits.

During a youth sport shooting event, I talked with Cpl. W.D. Lilly of the DNR. We discussed his 26 years as a game warden in West Virginia. Between volleys of gunfire, Lilly told me about the guns he has carried over his tenure: “The first gun the department issued me was a Smith & Wesson Model 686. It was a fine revolver, but Lord have mercy, it was heavy. Then the department switched to semi-autos. At first we had a S&W .40, but our last duty gun before going to GLOCK was a S&W .45 AUTO.”

Lilly told me he was glad to get his GLOCK 21 SF, mentioning specifically that it was much lighter to carry and that it did not have the manual or magazine safeties like the S&W. A few weeks later, during a range training/qualification exercise for the game wardens in District IV, I spoke with several of the other officers. As they took turns rotating off the shooting line, they all echoed the same praise for their new pistol. And, they also felt that the adoption of the GLOCK demonstrated that the powers that be were genuinely concerned about officer safety.

According to Lt. Tim Coleman, the state training officer for the DNR, “To be very honest with you, the GLOCK 21 SF was chosen because it is easy to maintain, easy to field strip and it is a very accurate weapon. This model has a double-stack magazine, whereas other manufacturers’ pistols we carried in the past had single-stack magazines. Of course, we looked at the test results already published, but I don’t feel that was the deciding factor.”

Out in the Woods

It’s always interesting to hear comments from the administrative side of any law enforcement agency. Often, the selection of a duty firearm or any other piece of gear is based largely on cost and, in some cases, with very little input from the field. That did not seem to be the case with the West Virginia DNR’s selection of the GLOCK 21 SF. But, I wanted to hear from the guys in the trenches, the officers who have to trust their duty handgun every day they go to work.

Capt. Larry Case is in charge of District IV, headquartered in Beckley, West Virginia. District IV encompasses eight of the state’s most southern counties. Case said that he has not heard a single complaint about the Division’s transition to the GLOCK 21 SF from any of the 18 officers he supervises.

One of those officers is Andy Lyons, who works in Summers County. For the most part, Summers County is like any of the other steep and rugged, rural counties in West Virginia, with one major exception: the New River. The New River Gorge National River runs through Summers County and gets a lot of traffic from hunters, fishermen and outdoor enthusiasts. Officer Lyons said he was particularly impressed with the GLOCK’s ability to deal with water and remain operational and corrosion-free. Lyons also told me he has used his GLOCK to cleanly dispatch three nuisance black bears without incident.

The DNR’s selection of the GLOCK 21 SF pistol came after an extensive review of a variety of pistols they initially felt would meet their needs. A number of factors played into the selection of this pistol. For starters, the DNR wanted a pistol chambered for the .45 AUTO. You can argue all day long about stopping power and that a 9×19 is as good as a .40 and that a .40 is as good as a .45 AUTO. However, you cannot argue with the 100-year track record the .45 AUTO cartridge has.

One feature of .45 AUTO pistols that have double-stack magazines is the large grip. With thirteen .45-caliber cartridges placed into a magazine, it tends to get wide and fat. One of the advantages of the GLOCK 21 SF is its smaller grip frame.

The DNR also needed to select one handgun that would fit the widest variation of officers—male and female officers who range in size from small to large just like any other selection of humans on the planet. Of all the pistols tested, the GLOCK 21 SF fit the most hands the best.

Game wardens, like any other law enforcement officers, need a handgun that is reliable. I carried a GLOCK when I was still working law enforcement on the street, and reliability is indeed a hallmark of the GLOCK pistol design. While interviewing the West Virginia game wardens, they were engaging in a firearms training exercise. Over the course of several hours, their GLOCK 21s consumed around 5,000 rounds of ammo and I did not witness or hear of a single malfunction.

GLOCKs do not have a thumb-type safety, but they do have three internal safeties including a safety built into the trigger. GLOCK denotes these three internal safeties as SAFE ACTION®. what this trigger safety essentially does is prevent the pistol from being fired unless the finger is firmly pressed on the trigger. Unlike the S&W handguns, which have a manual safety and were previously carried by the department, the GLOCK provides the intuitive (revolver-like) pull and shooting ease of use that many law enforcement firearm instructors really like.

I remember back when my department transitioned from revolvers to GLOCKs. There was a learning curve; officers had to become familiar with loading, unloading and immediate action drills, but they did not have to learn to deactivate a thumb safety before they could engage the threat.

At any rate, the West Virginia DNR felt that the absence of a magazine safety on the GLOCK 21 SF was a positive rather than a negative, and I cannot argue with them on that point. Many more law enforcement agencies that have adopted the GLOCK don’t seem to have an issue with it either.

I asked Capt. Case about how his officers were taking to the GLOCK 21 SF. I’ve shot and hunted with Larry several times, and I know the importance he places on marksmanship and safety. According to Case, “Our officers are shooting better with the GLOCK and we have no negative safety-related issues.” Actually, I was not surprised with his comment.

Why? It’s common for department qualification scores to go up after handgun transition training; when officers spend several days on the range shooting before they qualify, they’ll shoot better. I mentioned this to Case and he concurred. But, Capt. Case added, “I expected that too, but you know what? Our guys started off shooting the GLOCK better. Even the guys that used to struggle a bit were doing well right from the start of the transition training. Now, overall, our Division’s qualification scores are better than they’ve ever been.”

Regardless of the law enforcement job you have, it’s important that you have good gear. Good gear is gear that can be counted on to work every time you need it, no matter the conditions. Good gear lets you go home at the end of the shift. Good gear gives you confidence to start your shift and it also gives your family confidence that they’ll see you again.
All law enforcement officers deserve good gear, if not the best gear available. The West Virginia Division of Natural Resources has taken a bold step, broken a long-standing relationship and forged into the future by arming their officers, who have to face bad critters and bad humans in bad conditions, with a firearm they can depend on to get the job done. 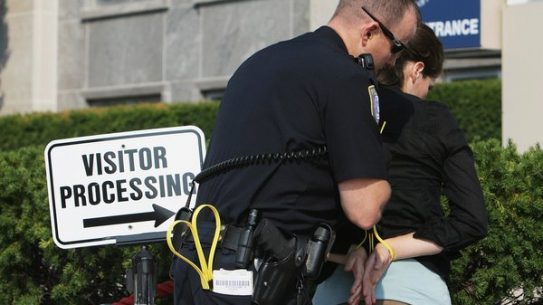