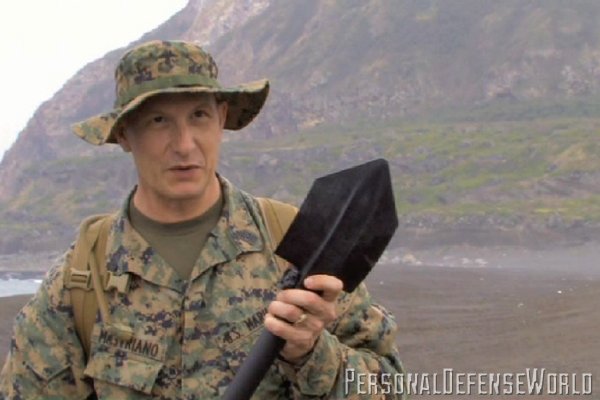 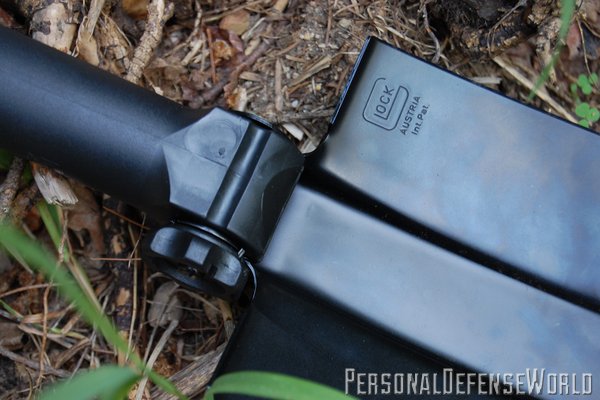 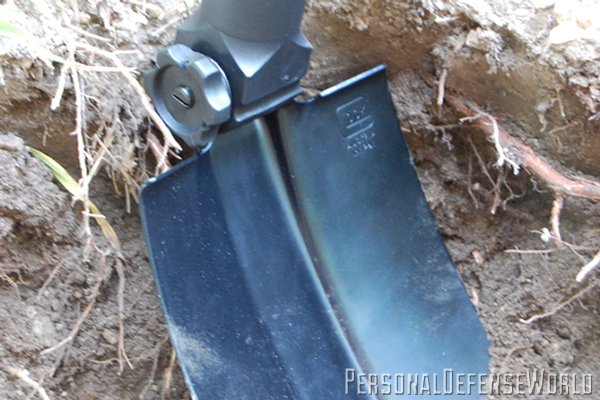 3 of 6
GlockTools01_phatchfinal
As a spade, shovel, or hoe, the GLOCK E-Tool is the perfect companion on any camping trip. Add a GLOCK Field Knife 78 or Survival Knife 81 for additional usefulness. 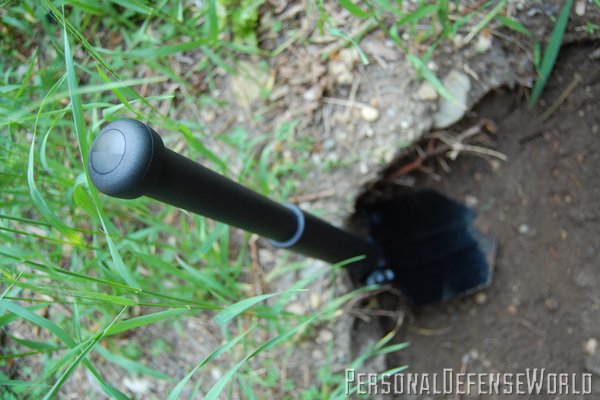 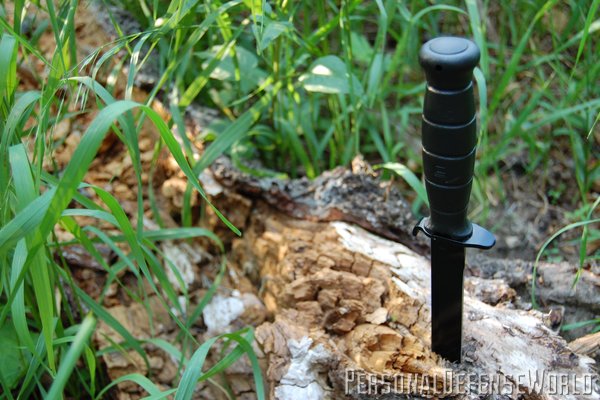 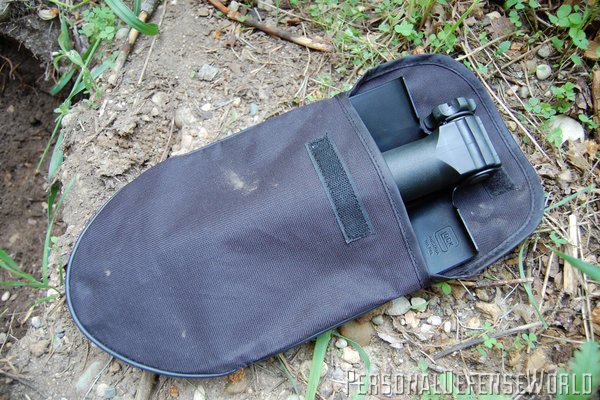 6 of 6
GlockTools17_phatchfinal
Folded down for storage, the E-Tool slips neatly into its nylon pouch. 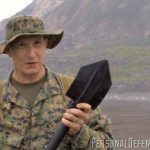 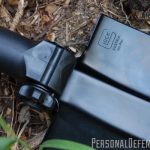 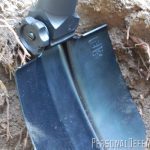 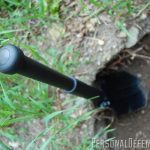 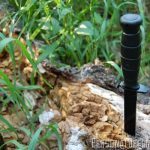 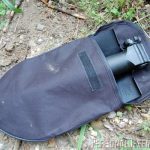 In addition to an impressive lineup of SAFE ACTION® pistols, GLOCK offers its world-renowned steel and polymer ruggedness in another form—a field spade known as the GLOCK Entrenching Tool.

Besides the familiar materials, efficient design and stellar durability, the GLOCK Entrenching Tool, of course, has little else in common with its GLOCK pistol cousins. It doesn’t shoot anything, it’s only available in one size and it has been accused of being a glorified folding shovel. Moreover, this E-Tool’s primary job is to move dirt and sand, a task that seems mundane if not downright boring. Will “perfection” apply here?

The GLOCK E-Tool indeed is a folding shovel. But it offers several important features that, like its pistol cousins, prove that it is profound in its simplicity. First, it is a spade, shovel or hoe, depending on where you lock the blade in place. To change the blade ­position, simply loosen the adjustment knob, put the blade in the desired position and tighten the knob. Indentations in the blade hinge will align with raised portions of the knob, holding it firmly in place.

Second, the handle extends and retracts to provide either additional leverage or to reduce its overall size, improving its usefulness and portability. To extend the handle, simply hold the entrenching tool while pulling and twisting the end of the handle. Third, a saw blade is stored in the extending handle that cleverly attaches to the handle end, providing a very sturdy platform for minor sawing operations. To affix the saw blade, unscrew the cap of the handle, remove the saw blade and place it back in the handle reversed, with the saw exposed. Place the handle cap over the saw blade, back onto the handle, and screw it down. So, with three shovel blade positions and a built-in saw, it’s actually four tools in one—five if you count it as a sort of last-ditch weapon, pun intended. When not in use, just retract the handle, fold the blade against it, and slide the tool neatly into the included nylon pouch, which is equipped with a belt loop and metal rings.

Throughout history, soldiers all over the world have used entrenching tools, spades or other digging tools to quickly and efficiently dig holes or trenches for cover, help free stuck vehicles and a myriad of other uses.

The GLOCK Entrenching Tool enjoyed placement in Battle Rats: Iwo Jima, a documentary about the 1945 U.S. invasion of the Japanese island during World War II. The U.S. Marines that stormed the island found it difficult to traverse the beach and hills as most of it was comprised of volcanic sand, a very difficult substance in which to move let alone fight.

Battle Rats host, Harlan Glenn, an author and expert in military history and weapons, praised the GLOCK E-Tool after working on the Iwo Jima documentary. According to Glenn, “It’s not just what I saw the tool do, it’s what I actually did with the tool. I was able to carry an entrenching tool that was lightweight, compact and easy to break down and set up. It was sharp like a knife and durable for harsh environments like Iwo Jima, where every other thing is a rock.”

Glenn noted that the GLOCK E-Tool was comparable to the U.S. M43 folding entrenching tool that his father carried in WWII. “I used that same tool in my Boy Scout days while exploring jungle battle areas on Okinawa,” he said. “The design was so good that the U.S. military kept improving upon it until the 1970s.”

According to Glenn, the GLOCK E-Tool is a very strong tool. “It didn’t bend or break when striking rock. In some cases, it cut lava rocks and large pieces of coral in half! It made easy work of tree limbs, cactus, etc.” His only complaint was that the cover should have better attachments for fitting onto a tactical pack.

Joining the Battle Rats for this episode was Sgt. Major Robert E. Mastriano, USMC (retired), who was given a GLOCK E-Tool by the show’s host. Mastriano said his first impression of the GLOCK E-Tool was very favorable, and in a brief portion of the documentary, he used it to dig in the volcanic ash, soft sand, and in the clay-like soil of Iwo Jima. The GLOCK E-Tool’s strengths, he said, were its light weight and ­compact size. “It easily fits on a combat vest,” noted Mas­triano, who also said that the saw attachment was a helpful feature. “I’d recommend this as an expeditionary tool for special operations groups.”

On the Beat and in the Home

Beyond the GLOCK E-Tool’s perfect fit for military use, a host of police officers and civilians have found it useful for more everyday duties. R. M. Robinson, an officer with the Cramerton Police Department in Cramerton, North Carolina, owns several GLOCK E-Tools (in addition to several GLOCK knives). He says he keeps one in each of his vehicles, along with a first aid kit, paracord, duct tape, and more. “You can never be too prepared,” he says. When not on duty, the E-Tool travels with the family on camping trips and is used for digging and cleaning out campfire pits and even helping to dig out drivers who get stuck in the sand. On the beach, his daughter uses the GLOCK E-Tool for making sand castles. “It holds up pretty well to sand and salt,” he says.

Jeff H. Rogers of the Georgia State Patrol says he has used his E-Tool to build a quick fire ring and kill a snake. He’s even used the pick end to go floundering. “It has been great for all outdoor outings,” he says.

Mountain Home, Arkansas, resident Aaron Bristol has used his GLOCK E-Tool to chop down plants, replant plants and help build deer blinds in the woods. Bristol says the GLOCK E-Tool fits in the cargo pockets of his pants and “is just ready for use whenever I need it.”

I put the GLOCK E-Tool to the test in the wooded area near my home to determine for myself just how robust this tool really is. For the first part of my test, I unfolded the E-Tool, locked the blade in the “spade” position (blade parallel with the handle), extended the handle, and I went to work to dig a hole as if for a campfire pit. The wooded area in which I was digging was fairly dense with trees and overgrown with weeds—I’d find out later if these were poison ivy or some other itch-inducing member of the flora—and featured an equal share of dead twigs, leaves, and even occasional rocks. Rather than clear any of these away, I just pushed the E-Tool blade into the earth and went at it, as if every moment counted. Sometimes I used just my arm strength to dig, other times I put a boot down on the E-Tool blade. After a few minutes of moving enough earth, resulting in a 2-foot-by-2-foot, 6-inch-deep hole, I tried the blade in the shovel and hoe positions and determined that, while each has their respective advantages, the E-Tool really shines as a spade. The extendable handle provided adequate leverage but might be improved with some kind of stippling or other grip treatment to improve purchase. Other than that, the E-Tool performed well. After several minutes of clearing and moving earth and rock, the only evidence of my use were a few scratches on the blade.

For the second part of my test, I kept the E-Tool in the spade configuration but used it like a machete, clearing smaller-diameter twigs off of dead trees with the blade, as if to collect kindling for a fire. While no match for a machete, the E-Tool could hold its own—it indeed is a spade with a blade. Just for good measure, I slammed it down, tip first, on a cut log. It stuck. I did this a few times, mainly because it was fun to do so, but also to test its ruggedness. When I wrenched it free after the tenth attempt, the E-Tool showed no distress from the beating.

Part three of my test involved the saw blade. Affixed and locked in place, the E-Tool made short work of several larger-diameter branches on dead trees.

Whatever use you may find for it, the GLOCK Entrenching Tool is ready to get the job done quickly and efficiently. Whether you’re in the military, police, or just looking to go camping or off-roading—now you’ll have at least two GLOCKs by your side. 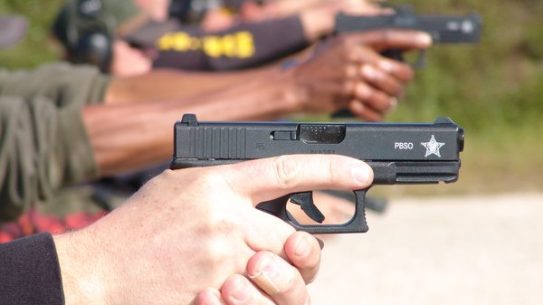 In addition to an impressive lineup of SAFE ACTION® pistols, GLOCK offers its world-renowned…