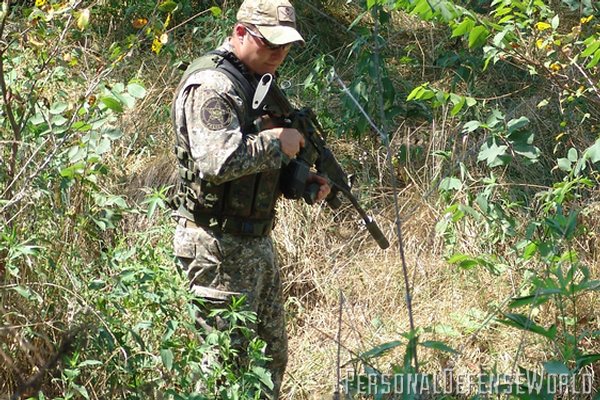 1 of 6
4. The Oklahoma terrain was brutal and hot_phatchfinal 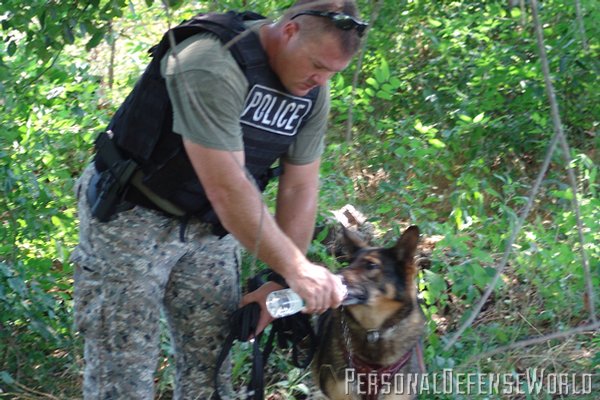 2 of 6
5. The Oklahoma heat was even worse on the officer in the fur coat_phatchfinal 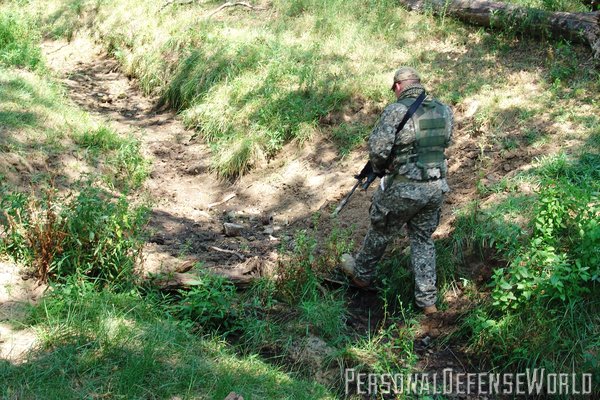 3 of 6
8. Officer Justin Smith looks for signs of the fleeing crimical in a dry stream bed_phatchfinal 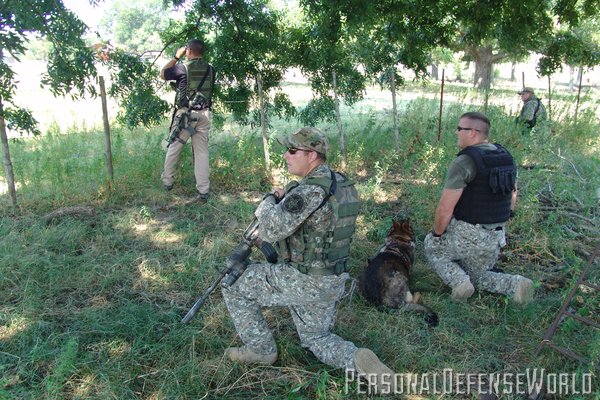 4 of 6
9. The mantracking SWAT team holds up under a Pecan Tree_phatchfinal 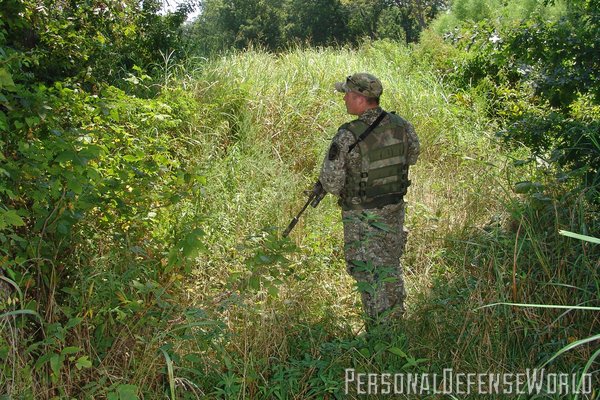 5 of 6
10. Officer Michael Holloway just moments before catchin the Outlaw in the thicket on right_phatchfinal 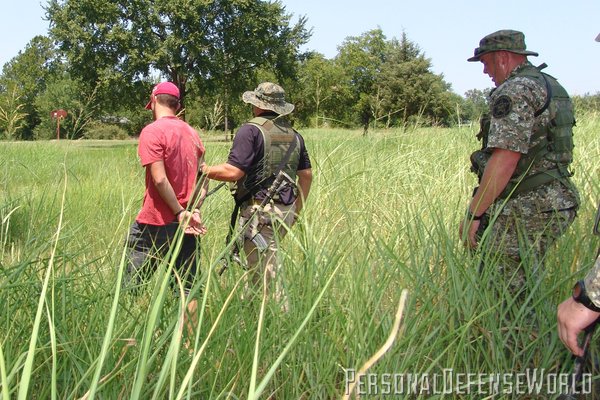 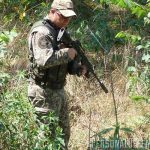 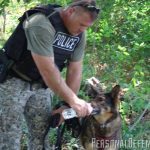 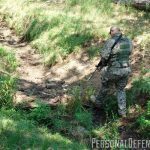 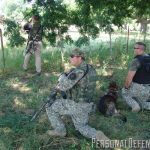 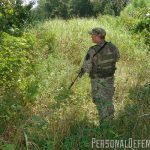 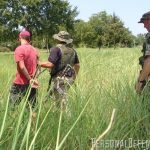 Before the turn of the last century, non-Native American criminals flooded the Oklahoma Territory Indian tribal lands. They used the lack of law enforcement to hide out with impunity while continuing to commit crimes. The Cherokee National Council formed the first Lighthorse company, which was commissioned by the U.S. government to provide law enforcement for Indian Territory. Named for General Henry Lee, “Lighthorse Harry,” this company was so successful, and feared, at ridding Indian lands of outlaws, that all successive Indian law enforcement officers were known as “Lighthorsemen” or simply “The Lighthorse.”

Cross-deputized with over 13 different federal, state and tribal agencies, the Lighthorse Police Department (LPD) now protects the Trust lands with the same authority. The new Chickasaw Nation LPD is led by Police Chief Jason O’Neal and Assistant Chief George Jesse, a full-blooded Chickasaw warrior also known as “Ca’Te,” who commands the LPD SWAT. The Chickasaw warriors of the Trust lands know the best of the old and new. They rely on a mix of modern and traditional methods to provide them with protection and strength.

One of their most prized and effective tools is the Talisman of the Chickasaw Brave, an eagle feather that gives them spiritual strength, protection from harm and connection to the land. They also rely on their GLOCK 22s in .40 to keep the LPD officers free from harm. The superior stopping power and high-capacity magazine ensures that each officer will prevail if the situation requires deadly force. I was witness to the need for both.

During a callout in the blazing hot Oklahoma 2010 summer to assist the Pontotoc County Sheriff’s Office, the Lighthorse SWAT was asked to track a felon over the unforgiving terrain of the Ada, Oklahoma, countryside. As effective as the Chickasaw braves over a hundred years ago, the Lighthorse Police are still renowned and in demand for their tracking abilities.

The team quickly geared up, all with GLOCK 22 pistols low on their hips, and entered the brush looking for a career criminal well-known to the officers to be just as dangerous and uncaring for the law as his 19th century outlaw predecessors who had fled into the brush to evade lawmen. The expert man-trackers on the SWAT team, led by Ca’Te, constantly scanned the ground and kept on the outlaw’s trail by finding subtle tracks, bent stalks and disturbed ground while steadily eating up the distance between them and the outlaw. When dwellings or buildings were encountered, the team cleared them with their GLOCKs in hand.

During the daylong search, several perimeters were established as the area for the search was reduced. Soon the Lighthorse SWAT was called in to clear the last wooded area where the outlaw could be hiding. Since the team was comprised of only Ca’Te, three officers and a K-9 unit (Lena, whose handler is Officer Clint Sutton), we had to split up to search the thickets, around the ponds and through the tall grass. I accompanied Officer Michael Holloway, who had just checked out one side of a thicket with me, and he wanted to search the back of it. We cautiously doubled back around the brush.

Suddenly, Officer Holloway brought his weapon up and yelled, “Come out with your hands up!”

The outlaw was just a few feet away.

The Chickasaw Indian Nation was and is still a sovereign nation. Their trust lands are outside the jurisdiction of state law enforcement. Frontier lawmen were not able to enter the lands to pursue and prosecute the outlaws like “Killer Jim” Miller, so the outlaws felt safe—until the Lighthorse found them. Back then a handful of ex-Army Indian Scouts were given the commission to clean up Indian lands, and they did.

With fewer than 30 officers, the LPD is now responsible for almost 8,000 square miles of territory and must have the best equipment that will not fail. One of the most liked and consistently reliable tools that LPD has selected is the GLOCK 22 .40-caliber pistol.

Corporal Alyson Orr said that she really “likes [her] GLOCK and would never go back to anything else.” That was said on a night where we were looking for criminal activity on a lonely dirt road next to the Red River, separating Oklahoma from Texas. Just like Lighthorse Harry, she represents the only law out here. Her faith in her GLOCK is real; she never knows what danger the next dusty trail or dark arroyo will reveal, with her backup sometimes an hour away.

Because of the huge area of responsibility, each LPD officer has to wear many hats. The LPD has several divisions besides their SWAT unit, including a trained dive team that can respond to initiate a rapid rescue or recovery in one of the many bodies of water within the Chickasaw Nation or adjoining Oklahoma lands. As a result, their equipment and weapons must be durable and tough to meet every task. With the GLOCK 22, they have a weapon that can be relied on in every environment, every assignment, and they know it.

Officer Justin Smith noted that his GLOCK gave him confidence with its SAFE ACTION® and world-class reliability. He noted, “When I pull the trigger, I know that my GLOCK will perform exactly like I train and hit what I aim at. Its simplicity allows me to stay focused on the situation—not my weapon.”

The deservedly famous GLOCK dependability was also recognized by Officer Michael Holloway who noted, “I have used my GLOCK in all kinds of situations, and it has never let me down!” That included the Lighthorse manhunt.

The surprised outlaw who was discovered by the Lighthorse found himself suddenly looking down the barrel of Officer Michael Holloway’s weapon. The pursued criminal had to recognize that his situation was indefensible. Officer Holloway aggressively moved forward by himself to restrain the outlaw. He maintained momentum; because, based on past experience, this outlaw was expected to fight or run if he was cornered. Maybe it was the weapon on him, maybe it was the heat, maybe it was the convincing tone of Officer Holloway, but before the career outlaw could act, he was hooked up and was soon surrounded by the team, which was very happy with the outcome.

No matter if they’re keeping the peace in one of the biggest casinos in the world, patrolling the dusty roads of Oklahoma, diving the deep waters of the Arbuckles or on the trail of a wanted felon, the Chickasaw Nation Lighthorse Police and their SWAT officers carry their GLOCKs with confidence. They train to keep their capability commensurate with the modern needs of law enforcement and are strengthened by the rich history of the Lighthorse. They are warriors with a badge and a GLOCK that help protect not only the Chickasaws but all Americans. They are the best of law enforcement, with the best handgun in the world—GLOCK. 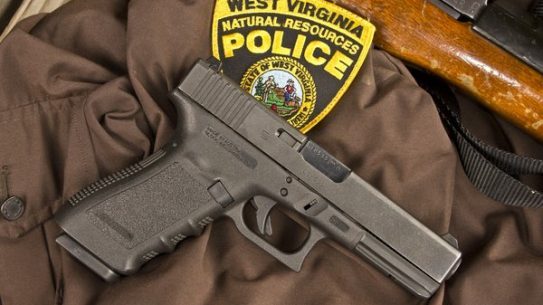 Before the turn of the last century, non-Native American criminals flooded the Oklahoma Territory…