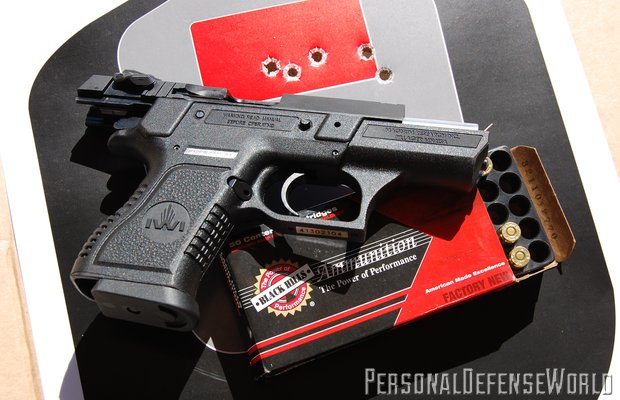 1 of 5
DSC_0046_phatchfinal
Magnum Research has kept the controls simple. The pistol features a large slide catch and a safety that also serves as a decocker. 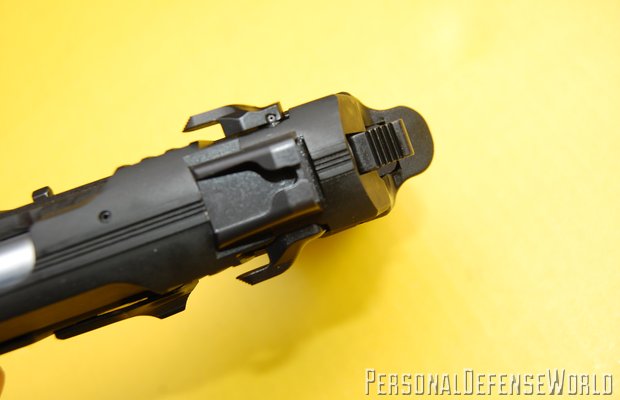 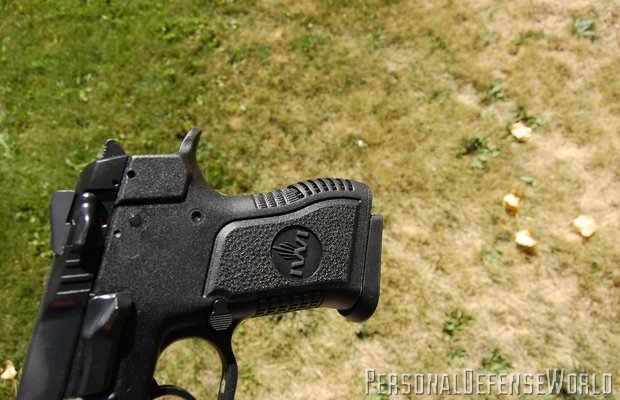 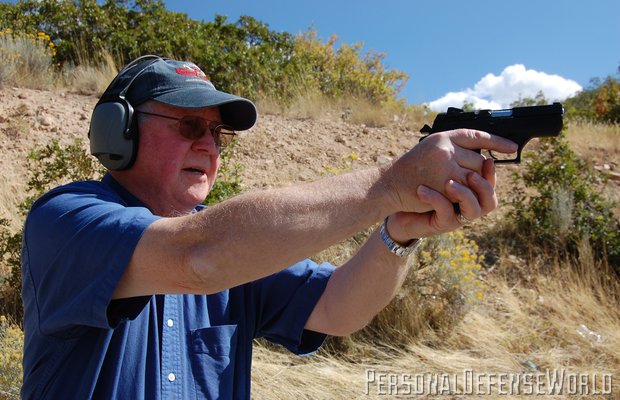 4 of 5
DSC_0060_phatchfinal
The Baby Desert Eagle offers an excellent handgun value and plenty of firepower. The grip of the Compact version is exceptionally comfortable and ideal for shooters with smaller hands. 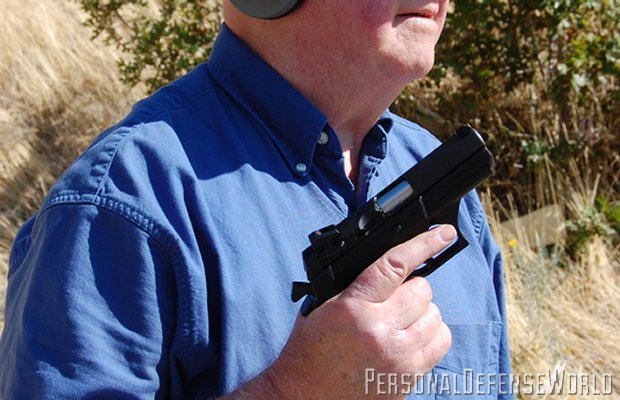 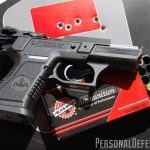 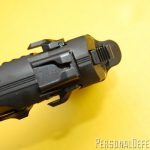 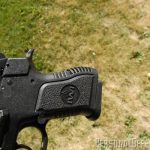 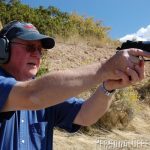 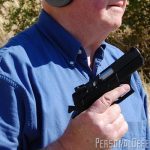 Worldwide, the CZ 75 pistol is almost as famous as Browning’s iconic 1911. It’s the handgun of choice among many European police and military organizations. More than a million of these guns have been manufactured and sold since Ceska Zbrojoka introduced them in 1975.

Because Czechoslovakia was an Eastern Bloc country at the time, it suffered import restrictions that made it difficult for American shooters to get their hands on a CZ 75. Inevitably, other manufacturers began copying the popular CZ 75 design. Variations include the Sphinx AT-2000, the Italian Tanfoglio, European American Armory’s Witness pistols and Israel’s Jericho 941. A number of different importers made these CZ 75 clones available. Some, like Charles Daly, have since gone out of business, eliminating one supplier.

Magnum Research is now offering an updated variant of the CZ 75 pistol, the Baby Desert Eagle II. The latest Baby Desert Eagle can be had in three different chamberings (9mm, .40 S&W and .45 ACP), and with a steel or polymer frame. It’s also available in compact, semi-compact and full-length sizes. The full-sized gun has a 4.52-inch barrel, while my compact test gun sports an abbreviated 3.64-inch tube.

Like both the CZ 75 and the Browning Hi-Power, the new Baby Desert Eagle II Compact features a short recoil-operated, locked-breech action. When fired, the barrel and slide are locked together as they begin moving rearward. After recoiling a short distance, the barrel cams downward and stops. The slide continues moving rearward, ejecting the fired cartridge. As it returns to battery, it strips a fresh cartridge from the magazine and feeds it into the chamber.

The new Baby Desert Eagle has an ambidextrous manual safety mounted at the rear of the slide. This allows you to carry the gun with the hammer cocked and the safety engaged. All non-double-action-only CZ 75 variants feature a “half-cock” notch. One interesting feature is that the slide rides inside—not outside—the frame. The result is a snug slide-to-frame fit and solid lockup when the gun is in battery. This increases accuracy.

While the new Baby Desert Eagle is closely related to the CZ 75, it has a whole different look and feel. The CZ 75 has a stepped-down slide that narrows near the muzzle. The Baby Desert Eagle’s slide has an unbroken appearance except for the cocking ribs, ambidextrous safety and sight at the rear of the slide. In my opinion, the Baby Desert Eagle Compact looks more like a modern pistol than its CZ 75 predecessors.
Engaging the safety locks the firing pin, decocks the hammer and disconnects the trigger mechanism. The sear is held down by the firing pin safety, while the trigger bar moves downward and can’t engage the interrupter. The safety also pulls the firing pin inside the firing pin channel before the hammer is released. The blocked firing pin cannot reach a chambered cartridge, preventing the gun from firing if accidentally dropped on its hammer or muzzle. This appears to be a very safe design.

1 of 5
DSC_0046_phatchfinal
Magnum Research has kept the controls simple. The pistol features a large slide catch and a safety that also serves as a decocker.

4 of 5
DSC_0060_phatchfinal
The Baby Desert Eagle offers an excellent handgun value and plenty of firepower. The grip of the Compact version is exceptionally comfortable and ideal for shooters with smaller hands.

While the gun felt good in my hands, the long double-action trigger weighed a gritty 13 pounds. The trigger pull wasn’t smooth—serious stacking was evident before the trigger finally broke. The good thing is, you have to deal with the recalcitrant double-action trigger only when firing the first shot. Once that first round is on the way, other cartridges in the magazine are fired single-action. The single-action letoff is a crisp 5 pounds.

The sights are fairly high and easy to see. They sport the conventional “three white dot” configuration, which makes fast aiming easy. The gun points naturally—a big plus for a defensive firearm. While the sights are “fixed,” both front and rear sights can be drifted sideways in their respective dovetails to make windage adjustments. Adjustments are best made with a small hammer and brass punch. Drift the rear sight in the same direction you want the point of impact to move.

A squared-off triggerguard is serrated up front, providing a natural rest for the index finger of your supporting hand. The beavertail at the rear of the frame protects the web of your thumb from being caught by the hammer or the cycling slide. The only other controls include the magazine release and the slide catch lever. This lever is larger than the slide catch on 1911 pistols, and is easier to remove when you disassemble the gun. The 9mm Baby Desert Eagle comes equipped with a pair of 10-round magazines, although 12-round magazines are also available. There’s no magazine safety—the gun will fire with the magazine removed.

Eagle in the Field

While the Baby Desert Eagle II Compact looked and felt good, extensive firing would prove the gun’s practical worth. I assembled an assortment of 9mm ammunition and headed for my desert range.

The Baby Desert Eagle digested everything with only a single bobble—the lone stoppage occurred when I purposely limp-wristed the gun. As most shooters know, autoloading pistols must be gripped with authority. Unless you have a firm grip and keep your wrist locked, some of the recoiling force is diverted from properly cycling the action when the gun fires.

With the Baby Desert Eagle II Compact, the first shot is typically fired double-action. Its long, gritty double-action pull makes precise accuracy difficult. You can carry the gun with a cartridge chambered and the safety set on “fire,” but that’s definitely not something I would recommend. My accuracy testing was done in single-action mode only. Firing the first round double-action would have created flyers that would have significantly enlarged the groups.

My impression of the Baby Desert Eagle is almost entirely positive. I like the way the gun looks, and how it feels in my hand. The grip is comfortable and provides good control. Pressing the magazine release pops the magazine free with alacrity.

This is a very durable, robust handgun. No tool marks were evident, inside or out, indicating high-quality manufacturing. The gun is tight and solid, with no looseness or rattling apparent. If I bought one of the Baby Desert Eagle Compacts for my personal use, I’d be tempted to move up to the .40 S&W. This would provide more power without adding bulk or significantly greater heft. Still, the 9mm has been a longtime favorite of defensive handgunners, and has been adopted as the official NATO cartridge. With proper combat loads—several are available—the 9mm Parabellum is nothing to sneeze at. It’s also easier to shoot accurately than the same gun in .40 S&W or .45 ACP persuasions.

I’m impressed with this Israeli-made pistol. It looks great and feels good in my hand. My initial evaluation of the handgun’s quality was completely verified after I’d fired a few hundred rounds through it without cleaning it first. It was tested straight out of the box. Reliable and accurate, the Baby Desert Eagle II Compact passed its initial test. I plan on running several hundred more rounds through the gun, and I don’t expect to be disappointed. 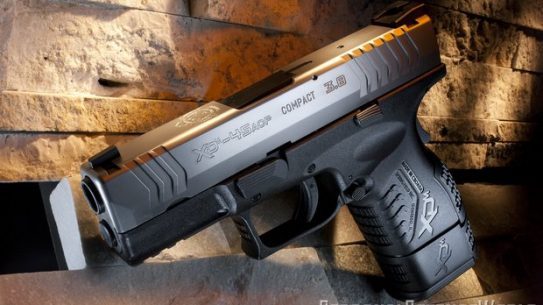 Worldwide, the CZ 75 pistol is almost as famous as Browning’s iconic 1911. It’s…