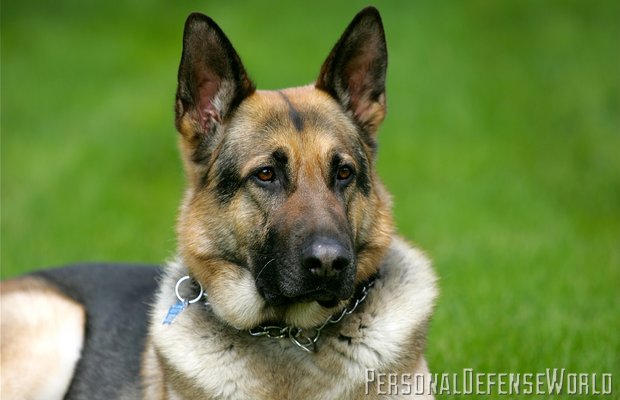 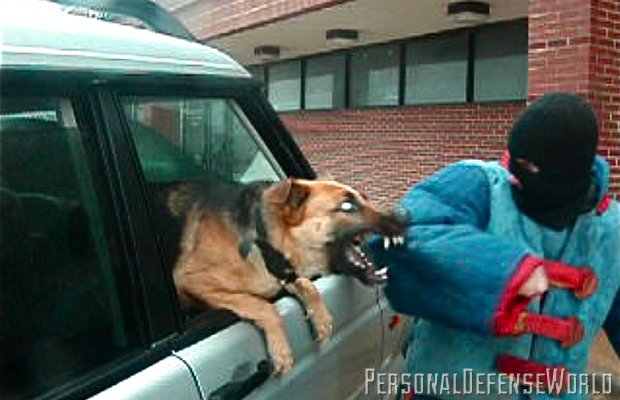 2 of 5
CQB-K-9-10_phatchfinal
A CQB K-9 is prepared to deter carjackings, attacks at the ATM or other vehicle-related crimes. 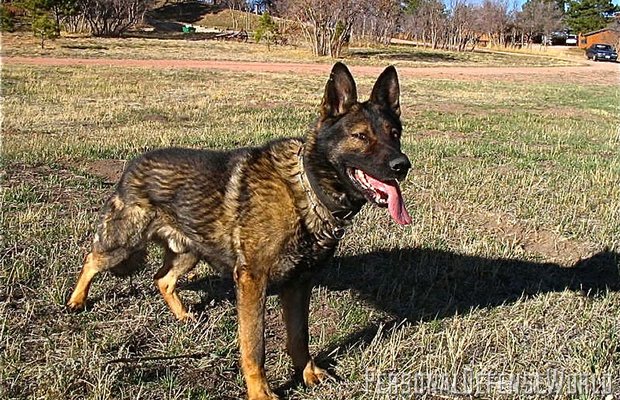 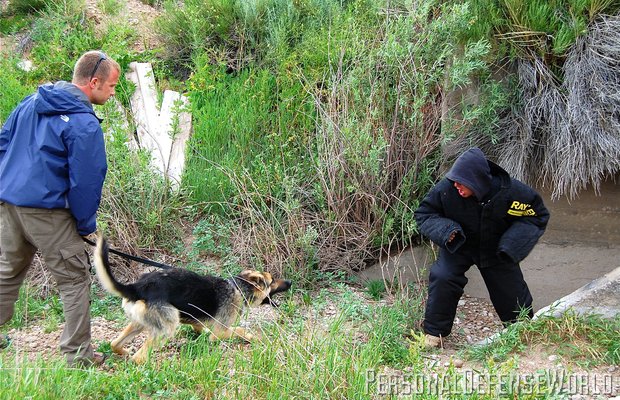 4 of 5
CQB-K=9-13_phatchfinal
A CQB K-9 protection dog in position to deter an attack from a possible threat. 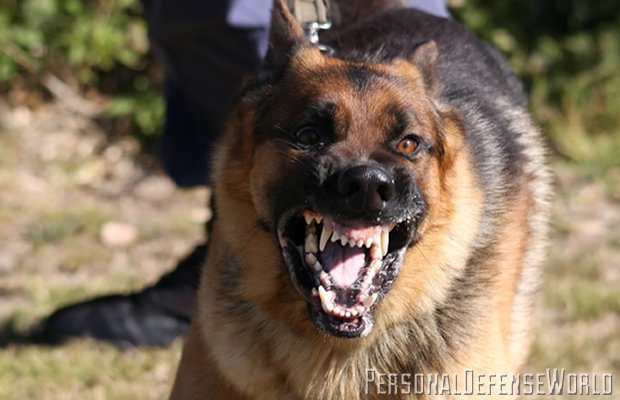 5 of 5
shutterstock_17420908_phatchfinal
A trained German Shepherd (Not a CQB K-9) Works with its owner during scenarios that simulate possible attacks they might face together. 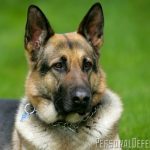 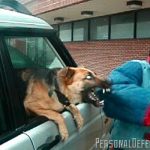 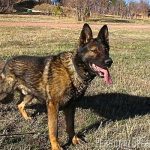 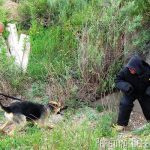 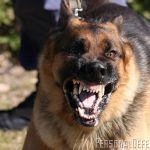 The personal protection dog offers a loyal companion who can react more quickly than even a well-trained martial artist, has enhanced senses to quickly identify a threat, and the training to deter or, if necessary, destroy an attacker. Even if the dog’s owner has a concealed-carry license or keeps a gun in the home, the dog will still be able to react to a threat before the gun may be reached. There are also a substantial number of people who chose not to own a gun for protection either due to the repressive laws where they live or through personal choice. For them, the protection dog is an excellent alternative. A firearm is a cold piece of steel, while a protection dog is a loving member of a family who only goes into action if his or her people are threatened.

Let me make a point here about well-trained protection dogs. There is a misconception that trained protection dogs are always dangerous. Yes, they can become aggressive upon command; they are malicious towards a criminal. However, they are safe around children and others who present no threat. This is not always the case when an individual or a family acquires a dog from a breed known for protection— Doberman, Rottweiler, German Shepherd, etc.—who did not properly train them. A large, strong untrained dog will have the urge to protect his or her family and its territory, but will not have the training to discriminate between a meter reader and an armed intruder nor be trained to immediately desist from hostile action at a command.

One of the more experienced and respected companies training personal protection dogs is CQB K-9 of Colorado. The owner, Alex Dunbar, has been training military and police working dogs and personal protection dogs for 31 years. He has a background in the USMC as a Recon Marine and as a Recon Scout/Patrol Dog Handler. Alex uses German Shepherds from the Czech Republic and Slovakia. Those dogs are from bloodlines bred for the Czech military and police and are widely known for stability in temperament and a strong working drive. Slovakian/Czech Shepherds also tend to be healthy and larger-boned. By the way, the dogs “speak” Slovak and that is the language in which they learn commands. Among other advantages, this will allow a dog to ignore anyone trying to confuse it with false commands.
Alex’s partner in Slovakia is a veterinarian who helps select the dogs for importation into the USA. At four weeks, the dogs are tested for temperament multiple times. This allows Alex and his partner to determine the dog’s aptitudes and select what type of work to train it in. All working dogs must be able to bond with their handlers, but this is especially important for a personal protection dog.

2 of 5
CQB-K-9-10_phatchfinal
A CQB K-9 is prepared to deter carjackings, attacks at the ATM or other vehicle-related crimes.

4 of 5
CQB-K=9-13_phatchfinal
A CQB K-9 protection dog in position to deter an attack from a possible threat.

5 of 5
shutterstock_17420908_phatchfinal
A trained German Shepherd (Not a CQB K-9) Works with its owner during scenarios that simulate possible attacks they might face together.

CQB K-9 personal protection dogs are trained to escalate deterrence based upon the situation and respond to a recall from their owner when given. The dogs are trained to operate and respond to commands on- and off-leash. Socialization is important so the dog can accompany the owner about his or her daily business and can live in a home with children and other pets. Among the scenarios for which the protection dog is trained are home invasion, assault, robbery, carjacking, kidnapping—basically, keeping its owner and family safe from myriad threats. Although Alex did not mention it when I discussed the training with him, I have also known of cases where a protection dog deterred attacks on its owner by other animals as well, including a bear in one case. It is worth noting that CQB K-9 can also train a dog as a service dog for the handicapped as well as a protection dog. Since a handicapped person will be less able to defend himself or herself, having the dual-trained dog would be very appealing.

Alex requires the purchaser of one of his protection dogs to undergo a minimum of eight hours of training with him—though he often does more—to learn the commands and capabilities of the dog. He will give this training at his facility in Colorado or will come to the new owner with the dog. As part of this training, he will put together realistic scenarios—generally at night—that put pressure on the handler and the dog so that they learn to react as a team. Alex even offers periodic refresher training for the dog and owner. Working dogs like to train, and this is chance for the dog and owner to get out and work together.

Life isn’t all work for the protection dog, however. The dog becomes part of the family and plays and enjoys home life just as do other dogs. Protection dogs are trained with a series of commands which can cause them to go on alert or to attack, but they also have an “off” switch which allows them to relax. Note, however, that there is also an “automatic” attack mode, which will kick in if the dog’s owner or a family member is in imminent danger.

CQB K-9 has a wide array of testimonials. One I found especially interesting is based on a newspaper article about a deputy county attorney who has a CQB K-9 protection dog. At her previous job, she had a stalker, and was given the dog from her parents to assure her security. When moving to the new job, she made sure the county attorney was aware that her dog Hoky would come with her. She was hired along with Hoky, who accompanies her to the county attorney’s office every day. Hoky has become a fixture at the office, beloved by everyone who works there. He plays with children who come into the office, and those who work there feel he actually makes many feel a little more comfortable amidst the attorneys. He “works” there. Of course, a county attorney’s office also sees some less desirable members of society and the employees all feel better about Hoky being there when they visit as well.

A highly trained protection dog is not cheap and carries a lot of responsibility. It is best if the owner is already a dog lover who will find the constant presence of a four-footed bodyguard enjoyable as well as assuring. But some testimonials state that even people who never owned dogs before have become deeply bonded with their CQB K-9 protection dogs. 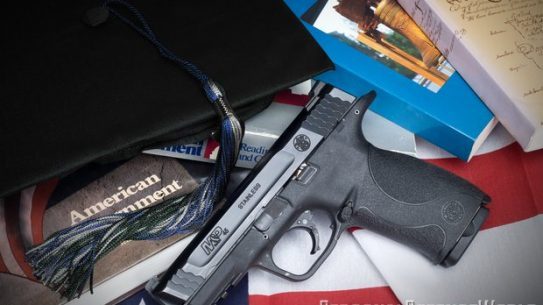