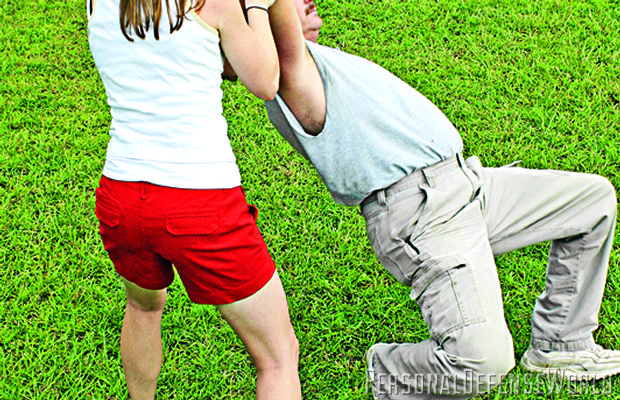 1 of 4
RearChoke_09_phatchfinal
…she turns her fingers upward and drives her whole body into a thrust that brings the attacker’s elbow up and wrist down, forcing him to the ground, or his rotator cuff will be torn out. She can now escape and make her next move to safety. 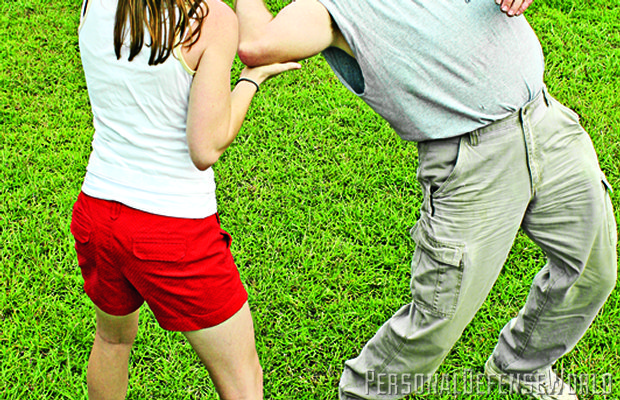 2 of 4
RearChoke_08_phatchfinal
…but here she finishes the fight with a takedown. Her right hand already in position on his elbow, she slides her left hand up to his wrist, pulling his wrist down as her palm pushes his elbow up. Notice how violently her move has taken the attacker backward off balance… 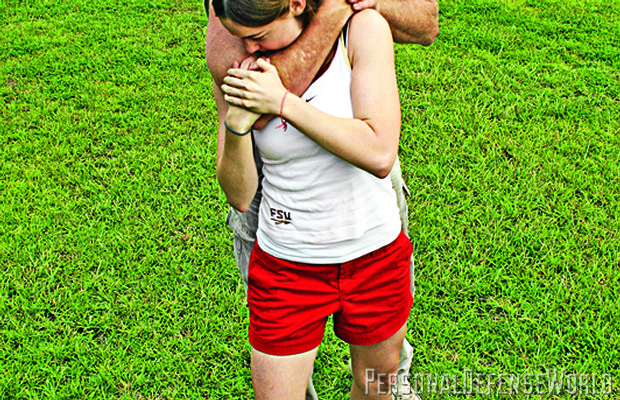 3 of 4
RearChoke_05_phatchfinal
she must move to her and his RIGHT, so she turns the toe of her right foot outward, preparing to spin on the ball of that foot, as her left knee flexes slightly to coil for the “kickoff”… 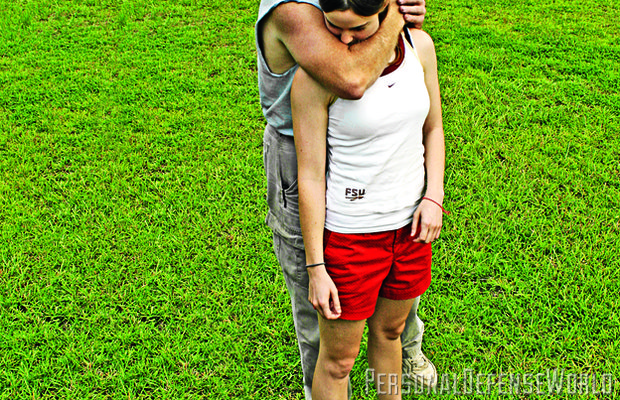 4 of 4
RearChoke_02_phatchfinal
FIRST CRITICAL MOVE! Victim instantly buries her chin deeply in the crook inside the attacker’s bent elbow. Her lower jaw now shields both throat and the carotids and jugulars. 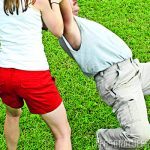 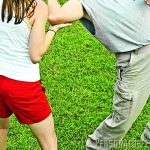 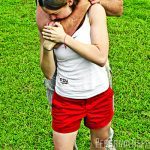 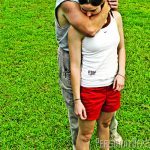 Escaping from a rear-choke, one of the most common assaults, isn’t easy. Fear, adrenalin and confusion set in, fast! For nearly four decades, I’ve worked primarily as a firearms/deadly force instructor with a subspecialty in what police call “DT” (defensive tactics), meaning unarmed self-defense and restraint techniques. These step-by-step moves work! Practice, what we hope you won’t ever need!

A choke that begins from the rear with an arm around your neck can take many forms. It might be a bar-arm strangle, in which the assailant’s forearm crushes your larynx and trachea. If you have a skilled opponent, it might be the move judo practitioners call shime-waza and fans of WWF wrestling know as “the sleeper hold.” This means that bicep on one side and forearm on the other will crush in a “V” pattern into your neck, blocking the carotid arteries that bring oxygenated blood to your brain, and simultaneously occluding the jugular veins that carry depleted blood back down to the heart.

Unconsciousness will occur somewhere between right now and fourteen or so seconds, and the sudden blood pressure change can result in your going into convulsions, or even experiencing a stroke. Either attack can be deadly. The escape technique is from one of the great masters of our time, Soke Takayuki Kubota, thirty or more years ago. It’s strong, simple, and it works. It’s based on leverage.

As the arm snakes around your neck by surprise, the first thing to do is bury your chin deep in the crook of the attacker’s elbow. This will protect the throat, and it will drive your lower mandible down low enough that the crushing pressure that might have occluded the great vessels in your neck will now squeeze harmlessly against hard bone. That will hurt, but it will not injure. Your priority isn’t putting the bad guy on the ground, though that would be nice afterwards. No, your priority is staying alive, and that’s why burying your chin deep down in the crook of his elbow has to be “first and foremost.” It also buys you time to finish the fight, and if you have to, well, your teeth are right next to that big vein of his that the nurses like to take the blood samples from…As soon as your chin is safely buried to guard your throat and your great vessels, take both hands and press them on his elbow, where it’s bent. Don’t put one hand on one side of his elbow and one on the other side: it distributes the pressure and robs you of focused force. Put one hand where you see in the pictures, and the other right on top of it. That will give you more leverage. Don’t try to pull down. He’s probably stronger than you, or he wouldn’t have picked you as a victim. Instead, press his elbow straight in toward yourself, thus creating a pressure point for leverage. Now, swing your whole body forward going in the direction of the offender’s trapping arm. That is, if he’s choking you with his right arm, spin to your right; if he’s choking you from behind with his left arm, pivot to your left. Maintain the inward pressure on his elbow joint as you turn with your whole body! You want to swing your outside leg (your left leg if he has grabbed you with his right arm) all the way out to your right. You want a good, solid 180-220 degree turn (In a 180-degree pivot, you’ve spun from facing squarely north to squarely south. For a 220-degree pivot, if you’re a shooter, think starting with your back to the target in an El Presidente match with both heels level on the firing line, and pivoting into a Weaver stance to face the targets with your non-dominant side leg forward and your gun hand side leg to the rear).

This movement puts your whole body against just his arm and against the trapped elbow joint of his arm. His elbow becomes the hinge of a gate that is his arm, and that gate swings wide open to allow you to escape. Now you’re free of the choke, and you have multiple options, but it will go best if you have already decided beforehand what option you’re likely to take. If you are not a fighter by nature, the best bet may be to simply run. The 180-degree pivot of your rear leg will already have literally given you a running start to do the last thing he expected and end up running away. As you turn, his arm on that side will still be up, and his vulnerable kidney area will be exposed to you. A hammer fist to the kidney, or a strike there with whatever object you might have had in your hand as the assault began, might be appropriate. If you have other force options, you can get clear of him. Disengage and draw whatever defense tool may be appropriate and legal under the circumstances.

Or, if you’re trained in grappling as demonstrator Anna Gunter (model: right photos), you use your skills to take advantage of his already bent arm and put him on the ground, as shown, in this case with a shoulder lock.

Repetition is Key! NAIL IT!

You won’t learn this or any other hand-to-hand self-defense technique without practice. Do it, over and over. Use the photos and captions here as guidelines, and pay attention to details. Do it carefully, start in slow motion. Practice with a partner not to hurt each other, you’re here to learn how to not get hurt. Thanks to Anna Gunter our 5’-4”, 115 pound model, in the role of defender in the pix, and good guy Jon Strayer, 5’11” and 200 pounds, in the unaccustomed role of attacker. Thanks to Soke Tak Kubota, the great karate master who shared this technique with me. Good luck and stay safe. 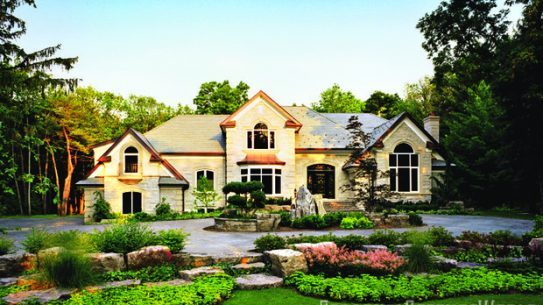 Escaping from a rear-choke, one of the most common assaults, isn’t easy. Fear, adrenalin…