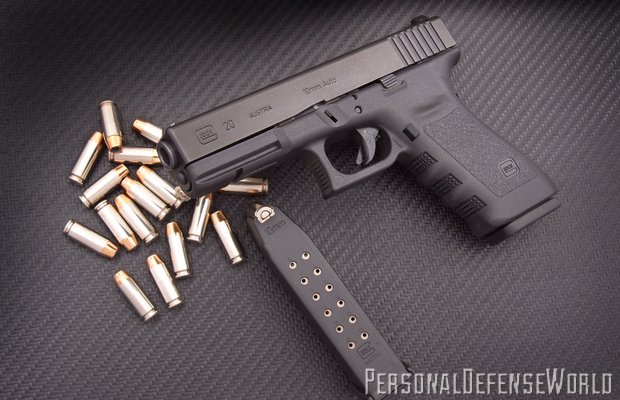 1 of 6
1. GLOCK AUTOPISTOLS MINI GUN TEST No.2 G20 .10mm_phatchfinal
The Glock 20 was the first model from the Austrian armsmaker to chamber the hard-hitting 10mm cartridge. The SF (Short Frame) model was added in 2011 to give users a slightly smaller grip frame (distance from the trigger), which measures 2.85 inches. 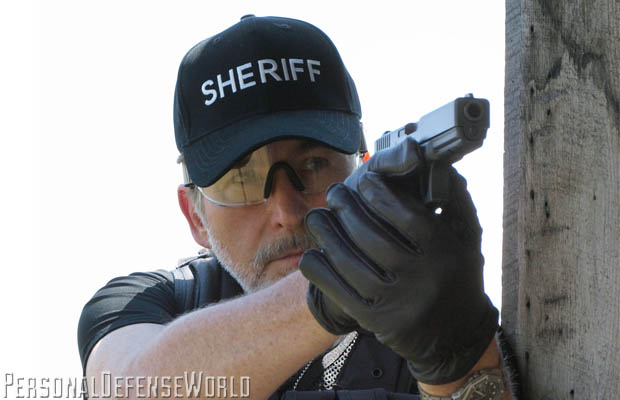 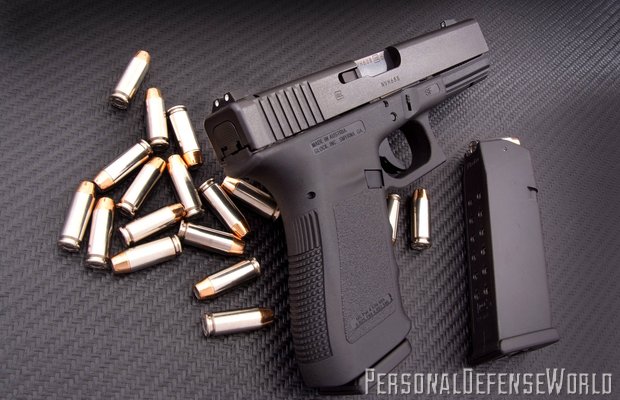 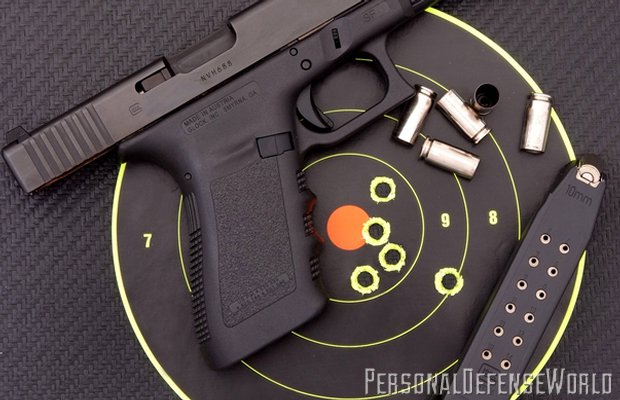 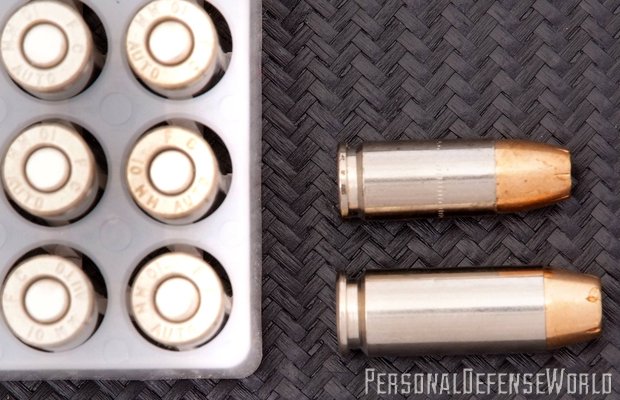 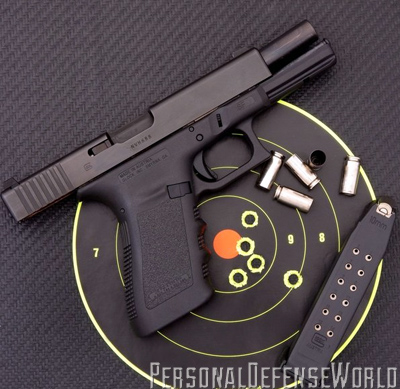 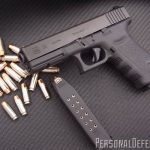 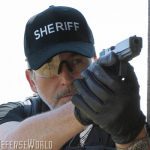 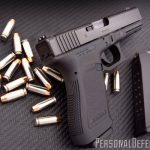 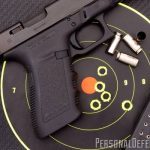 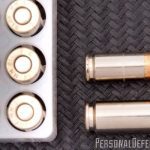 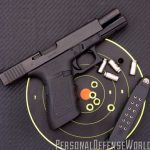 Developed in 1983 as a law enforcement cartridge and originally adopted by the FBI, the 10mm was designed to deliver exceptional stopping power in a smaller caliber than .45 ACP, and while 10mm sounds like a bullet that is just one little bitty millimeter larger than a 9mm, the 10mm packs a wallop that gave everyone pause because of its higher chamber pressures and heavier recoil; yes, less than a .45 ACP cartridge, but still a handful for many. It has something to do with Newton’s third law: “For every action, there is an equal and opposite reaction.”

The 10mm had a brief turn with the FBI as most agents found it too harsh of a round to handle. Similar complaints occurred in other sectors of law enforcement and the 10mm finally gave way to the most commonly used cartridge today, the .40 S&W. While a number of ammunition manufacturers produce the 10mm, including Federal, Remington, Winchester, Hornady and CorBon, the guns chambered for this high-power round have diminished over time, but Glock has managed to tame this wildcat with a full-size semi-auto that allows optimum firepower without some of the abuses of harsh recoil, making the 10mm a very viable cartridge for personal defense.

The Glock 20 was first introduced in 1990, some seven years after the cartridge debuted, and is available in the SF “Short Frame” version (tested), and in a ported barrel G20C version. The latter is ideal for competitive shooting. A 10mm is a big bullet (0.4 inches diameter) in a big cartridge case (1.25 inches), and is usually loaded in a 180-grain weight (the range is 135 to 200 grains). Comparatively, the 10mm dwarfs the popular semi-auto 9mm round that was once the darling of law enforcement, which still remains the standard U.S. military pistol cartridge.

Building a gun to make the 10mm manageable is no small feat, and the Glock 20 does this with both balance and heft. With a larger slide and receiver, the G20 SF weighs 27.51 ounces (empty) and measures 8.07 inches in overall length with a 4.61-inch barrel. It also has a standard capacity of 15 rounds, making this a real powerhouse on your hip.

Specifications for the G20 series show a factory trigger pull of 5.5 pounds and a length of pull (including the safety toggle) of 0.5 inches. Trigger reset, like all Glock models, is almost instantaneous, and a Glock will fire a chambered round even with the magazine removed, a feature that most in law enforcement endorse.

Standard features on the G20 include a rail on the dustcover, which accepts a variety of tactical lights, lasers, and combination laser/tactical light systems like the GTL 10, GTL 21/22 and GTL 51/52, as well as numerous other accessories.

Like all Glock models, the G20 is a striker-fired design utilizing the Glock Safe Action constant double-action design. When the slide is cycled, the firing pin is set in a half-cocked “safe” position (safety and trigger forward), and the gun can only be discharged by pulling the safety and trigger simultaneously to disengage the firing pin safety. Though some argue the wisdom of the trigger safety design, this system is especially handy if you are on the move or engaging multiple targets. As soon as pressure is relieved from the trigger, the gun returns to a safe condition. A third internal safety prevents the gun from discharging if it is dropped. This is a very deliberate design since a Glock has no manual safety or external hammer to decock.

There are two visual tells for the gun’s condition, though one of them can be misleading. If the trigger has been pulled and no round discharged, it remains in its rearmost position (locked back with the safety toggle almost flush to the trigger). When the action is cycled, the trigger moves forward and the safety toggle extends. This, however, does not mean a round has been chambered. It is easy to see or feel if a round is chambered because the extractor will project slightly away from the slide when a cartridge is loaded. This is a very important visual check.

The test gun was a G20 SF fitted with fixed tritium front and rear sights. This is an improved sighting system that provides excellent target acquisition both in daylight, where the three dots appear bright white, and in low light conditions, where they glow green. Glock also offers optional steel sights and adjustable rear sights.
The G20 SF uses the earlier flat-coiled steel recoil spring and has the standard SF grip frame (which is slightly smaller than the standard grip frame). With a weight of 44 ounces with 15 rounds onboard, the Glock has superb balance and, being a full-size model, the heft to take the abuse of those hard-hitting 10mm rounds.

Our range test was done firing off-hand from a distance of 25 yards using Federal Premium 180-grain Hydra-Shok JHP ammunition. Traveling down the G20 SF’s 4.61-inch barrel, the Federal Premium ammunition cleared our chronograph at 970 fps (feet per second). I used an 8-inch circumference Shoot-N-C splatter target for effect and quick visual check of hits. The best groups were fired using a Weaver stance and two-handed hold, and they measured 2 inches for five rounds, with four in the 10-ring at 1.75 inches. Laid over a B-27 full-body silhouette, this would be four in the bullseye and one in the 10-ring, central body mass, and all five-point hits.

Recoil, while substantial, was not what I would regard as harsh. In fact, the Glock 20 makes it surprisingly manageable compared to other 10mm handguns tested in the past. The G20 also offers quick target acquisition using the tritium front and rear sights, which are very easy to see in bright daylight as well as in low-light situations. The trigger pull on the G20 SF test sample averaged 5.9 pounds. It is a little on the heavy side, but the Glock trigger only requires 0.5 inches of travel to release the striker, so it is almost a moot point.

Currently the G20 is not among the Gen4 group and does not offer the interchangeable backstraps, a minor loss for those with smaller or larger hands than the gun is designed for, but the standard grips work well for the majority of shooters and the SF designs makes up the difference. I wore tactical gloves to take up a little distance to the trigger and that worked perfectly on the SF.

While 10mm is not a commonly used cartridge, there are still quite a number of guns designed for it. Without a doubt, the easiest one to handle with the highest standard capacity is the Glock 20. A gun that, had it been available to the FBI and law enforcement agencies back in the early 1980s, might have given agents and police a bit more confidence with the 10mm. But if that had happened we might never have seen the development of the .40, and Glock was the first armsmaker to offer a semi-auto chambered for that now-venerable round. Name the cartridge and there’s a Glock to handle it.

Developed in 1983 as a law enforcement cartridge and originally adopted by the FBI,…