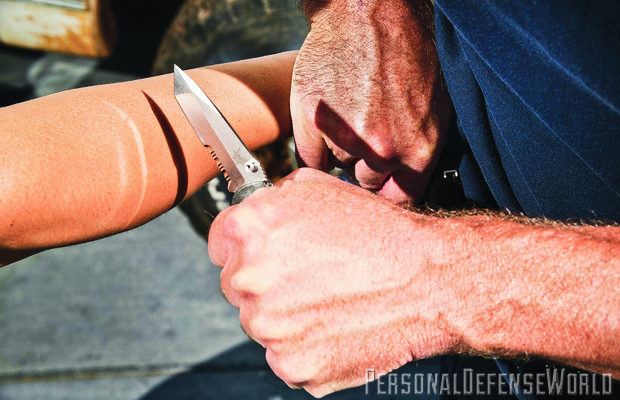 1 of 5
Retention knife 1_phatchfinal
Clamp the attacker’s hand with your strong hand while slashing his forearm with a knife drawn from your support side. 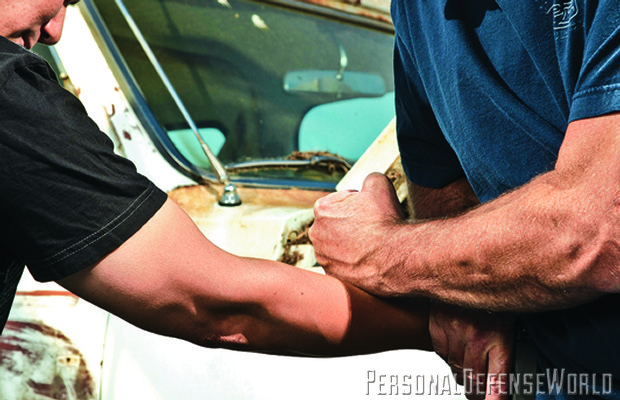 2 of 5
Retention after grab_phatchfinal
To get an attacker’s hand off of your weapon, pound hard on his forearm. That will hopefully break his hand loose. 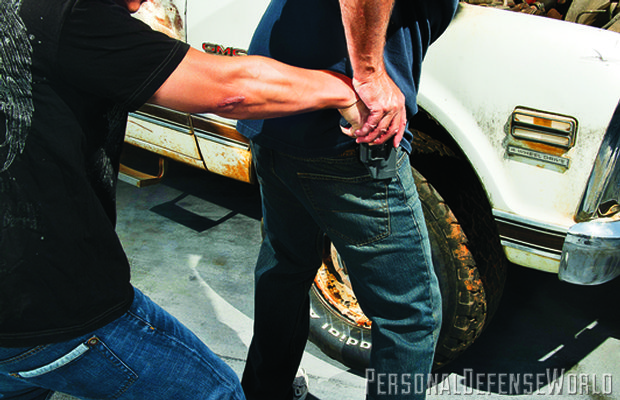 3 of 5
Retention 2_phatchfinal
If an attacker tries to snatch your gun, first clamp down on his hand. 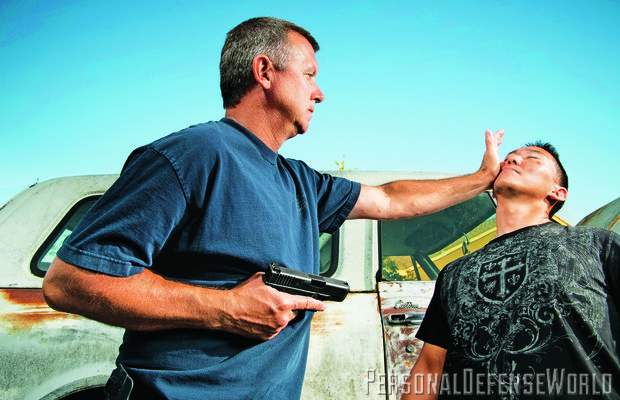 4 of 5
Retention 1_phatchfinal
A sharp blow to the attacker’s face or chest can drive him back, which allows you to engage your handgun. 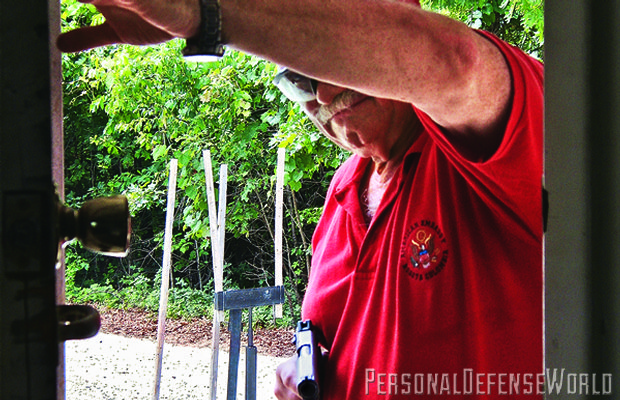 5 of 5
gun grab new_phatchfinal
Smart homeowners should train for worst-case scenarios. There are right and wrong ways to deal with home clearing. 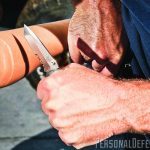 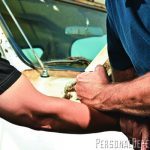 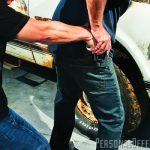 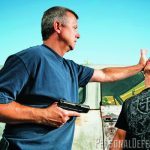 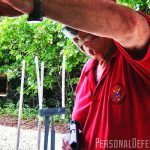 After Missouri passed its Shall Issue law a few years ago, I observed many friends regularly carrying a gun for the first time. A lot of us hang at a local gunshop where many of the regulars are current or retired law enforcement—we had carried guns for most of our lives. The first thing we noticed was that many new concealed-carry licensees had chosen to carry their favorite big guns—Colt 1911s, S&W Model 29s and so forth. The second thing we noticed was that after a few months most of them switched to something smaller, as was to be expected.

Naturally, there is a learning curve for those who are carrying concealed for the first time. With that in mind, I and a friend from the gun shop thought it was a shame that most concealed-carry trainers didn’t devote time to weapon retention (we had both taught weapon-retention classes in the past). So whenever I had the chance, I taught a few basic techniques for preventing weapons from being turned against the user.

I’ve taught military and law enforcement personnel methods for retaining their weapons, some of which applies specifically to those who carry concealed. By no means do I have the definitive system for weapon retention, and some reading this may have learned other techniques as effective as mine, but going over these techniques is worthwhile.

Job One: Conceal It!

First, a major aspect of retaining your weapon is not letting anyone know you have it in the first place—the only time someone should know you’re armed is when a life-threatening situation requires you to draw. Next, choose a carry method that keeps your weapon well concealed, and be aware of situations that are likely to reveal it (when reaching for a wallet or grabbing for something on a high shelf). Certain carry methods are better than others.

For belt guns, I dislike small-of-the-back carry for a few reasons. In a vehicle accident it can drive a hard object into your spine—not a good thing! And when the weapon is in the small of the back, it’s easier for someone else to take and harder for you to see that someone when he or she is behind you. Based on my experience, a jacket or coat is more likely to ride up over the gun with this method of carry. If your gun is in the small of your back and someone does go for it, my best suggestion is that you backpedal as hard and fast as possible to drive them into a wall and knock them off balance.

I’ve found the best belt-carry method for retention purposes is the strong-side hip carry. Whenever you’re near someone, you can keep your elbow or arm against the gun, ready to press tight. Don’t overdo it, however: this can result in a stiff-armed tell. Experienced cops can usually spot someone using the elbow gun-check (experienced criminals probably can too).

When I worked on security teams I sometimes used the cross-draw. It allowed faster access in a crowd and retention with my support sidearm. However, the cross-draw also presented the butt of the handgun to an assailant, giving them a better opportunity to grab the gun.

Shoulder holsters are good for retention but may require a heavier jacket to conceal.

As for ankle holsters, I never liked them, but they are good for concealment and retention. Unless you practice, getting to an ankle holster is somewhat slow. Going to the opposite knee and drawing is better: it speeds things up and makes you a smaller target. A friend who was on the local FBI bank-robbery detail used to carry his backup S&W Model 60 in an ankle holster. One day when he stopped by while working a case, my Airedale, who adored him, had noticed the ankle holster and tried to pull it away but didn’t succeed. We concluded that was good weapon retention if it could resist a 70-pound dog!

The carry method likely the best for retention purposes is the side-pocket carry, though it’s slower on the draw. There are full-power handguns that fit readily into a pocket. I carry a Heckler & Koch P2000SK 9mm loaded with 11 CorBon 125-grain JHPs in a Don Hume pocket holster. When passing through parking lots and the like, I casually walk with my strong hand inside my pocket.

For female concealed-carry licensees, I do not recommend carrying the handgun in a purse, as an attacker may steal the purse or otherwise impede a draw. It is far better to carry a smaller gun which will fit in a pocket. But if you prefer a purse, get one of the excellent carry purses (for example, a Galco) that has the zip pocket on the side enabling you to keep you hand on the gun. If the purse is snatched, the gun will come free.

1 of 5
Retention knife 1_phatchfinal
Clamp the attacker’s hand with your strong hand while slashing his forearm with a knife drawn from your support side.

2 of 5
Retention after grab_phatchfinal
To get an attacker’s hand off of your weapon, pound hard on his forearm. That will hopefully break his hand loose.

3 of 5
Retention 2_phatchfinal
If an attacker tries to snatch your gun, first clamp down on his hand.

4 of 5
Retention 1_phatchfinal
A sharp blow to the attacker’s face or chest can drive him back, which allows you to engage your handgun.

5 of 5
gun grab new_phatchfinal
Smart homeowners should train for worst-case scenarios. There are right and wrong ways to deal with home clearing.

What if an assailant manages to get your gun away from you? React immediately and violently. If your opponent is attempting to pull your gun from your holster, clamp his hand down on the gun and start pounding on his arm as near the wrist as possible using your fist. Simultaneously kicking him in the shin with the side of your shoe is even better. Many law enforcement personnel, including me, also carry a folding knife that can be accessed with the left hand. While you’re forcing the assailant’s hand down with your right hand, pull the knife with your left, flip it open and slice up the assailant’s arm. Be sure not to slice too close to your hand, or you may end up cutting yourself. Alternatively, if you carry a backup gun on the left side pull it out and shoot your opponent. If he is attempting to take your gun, he is a lethal threat.

What if your opponent grabs your gun after you draw it? Counterattack hard and fast. First, bear in mind that an attacker grabbing the barrel/slide of your weapon can exert enough force to readily torque the weapon from your hand. If he grabs the muzzle, shoot him off of you if you can. If you can’t, get your support hand on the gun and keep your finger out of the triggerguard—you’ll likely end up with a broken trigger finger if he torques the gun away. Keep kicking your attacker’s knees and shins and stomping his feet. If it appears likely that the attacker may wrest the gun away, hit the magazine release (if an auto) and dump the magazine. If the pistol has a magazine safety, it is now inoperable. If you get it back, you can jam in your spare mag. If there’s no magazine safety, the gun will have a single shot. If using an autopistol with a hammer drop safety such as some S&W autos, the Beretta 92 or others, then try to shove the safety to the “on” position to render the pistol inoperable. I often carry an S&W Model 4563 because it has these proprietary features, but mostly because I like the gun.

A good draw can help prevent the handgun from being taken away as it comes out. I was at the Sig Sauer Academy a few years ago and picked up a technique that, as I remember, originated in South Africa where several police officers were attacked and lost their guns during the draw: as the gun is drawn, the support hand comes over to meet the strong hand just in front of the chest; the gun is then thrust forward into a two-handed shooting position. This technique has the advantage of allowing good close-range engagement from the middle-of-the-chest position and the ability to put two hands on the gun quickly. Among the easiest draws from which to disarm someone is the bowling draw in which the hand swings up in an arc from the holster to meet the support hand when fully extended.

Care must be taken when drawing close to an attacker. If possible, move backward and to the side to gain distance. At close quarters, a hard punch to the attackers jaw or chest may be used to move him away while you turn slightly to the side and draw. Also if there is a hedge or wall that can keep an attacker away while you bring your weapon into action, get behind it.

If dealing with a home intruder, it is better to call the police and stay put rather than confront him. At my house my Airedale terrier is likely to encounter an intruder first, so if he alerts us and goes into action, I let him take the lead while I follow with a weapon. On TV, I see high-speed operators going through doorways with their weapons fully extended all the time. I would not recommend this technique, especially within the home. When moving through doorways keep your gun in tight to your body, stand back from the doorway and slice the pie as much as you can before entering. When you do go through go quickly, pushing doors open with force—if the door’s open, hit it so anyone hiding behind it gets a good knock.

There are many weapon retention techniques—I’ve only covered ones pertaining to handguns. For the above close-quarter battle techniques, getting a “trainer” handgun and practicing with a friend will help you find your weak spots. Consider how you will react and think tactically. Be suspicious of any strangers, and be ready to act if necessary.

Here in St. Louis, we know that strangers in deserted places who want to shake our hands generally plan to immobilize our right hand, so that their co-boob can attack us or attempt to disarm us. Just because you are carrying a weapon does not mean you are safe. On the contrary, if you let an attacker get your weapon you are in big trouble. 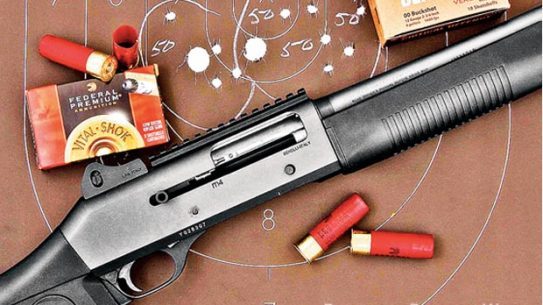 After Missouri passed its Shall Issue law a few years ago, I observed many… 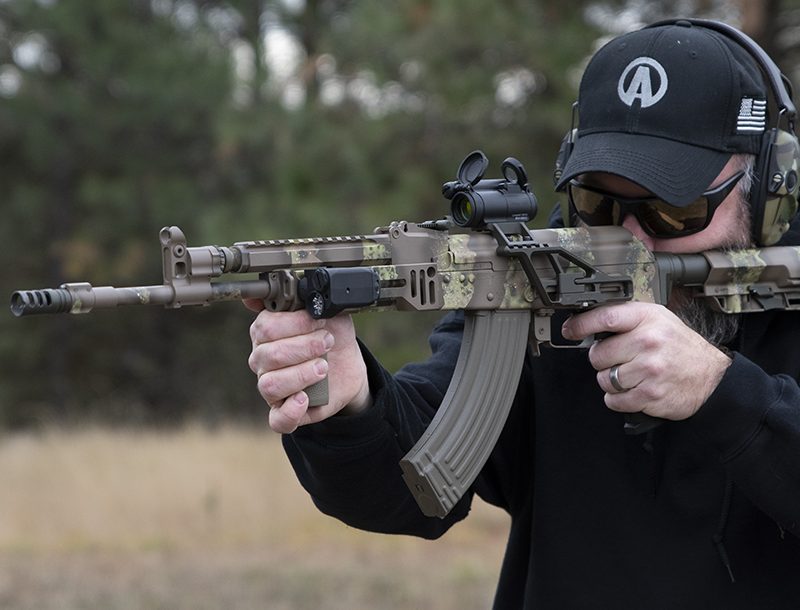