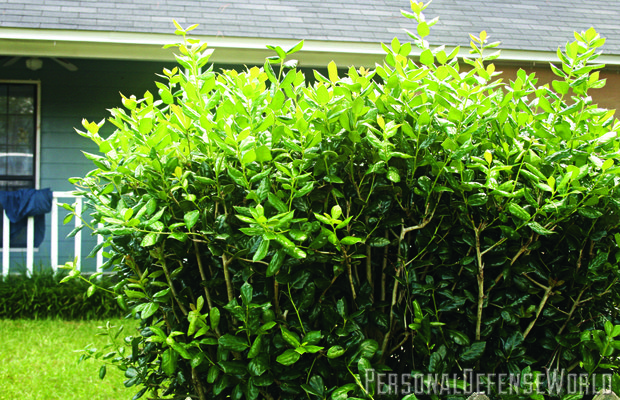 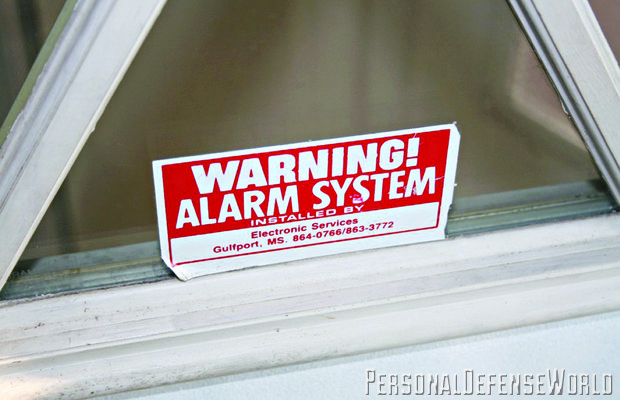 2 of 4
7_phatchfinal
Alarm systems can be part of the deterrent but not an absolute deterrent. 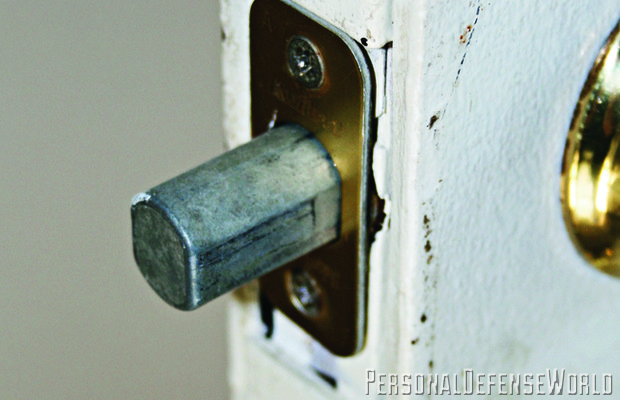 3 of 4
6_phatchfinal
Dead bolts should sink at least an inch into door frame. 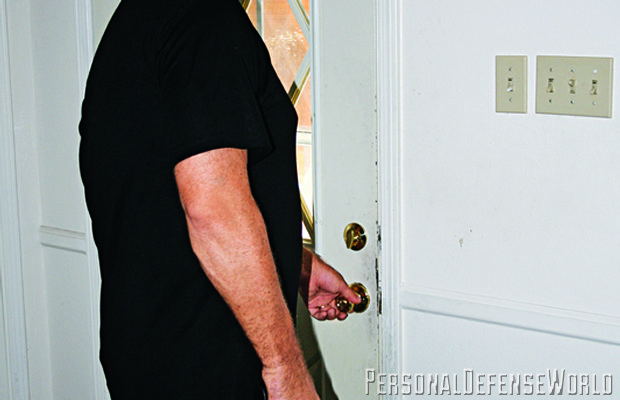 4 of 4
4_phatchfinal
FIRST, call 911! Have a plan now for an unwelcome guest with deadly intentions. Pistols allow for the full use of one hand, unlike long guns. NOTICE ONE OF THE CARDINAL RULES: Here, his finger is NOT on the trigger! 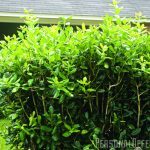 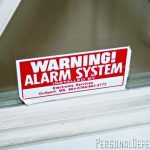 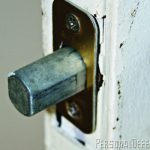 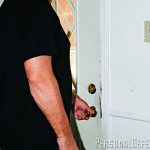 When we were kids we imagined a burglar like those portrayed on cartoons or in old black and white movies. Donning a black mask and wool cap, the burglar would skulk around looking for a way to sneak in and out of your home or business without being detected. As we grew older we may have dismissed the cartoon image but we still thought of a burglar as a stealthy criminal that would come and go “like a thief in the night”.

There are two kinds of people who know the previous image to be complete fantasy–cops and victims of crime. Burglars are rarely stealthy and rare indeed is the thief who will “pick” a lock. Their tool of choice is a pry bar to force a door or some type of bludgeon to smash a window.

While most people fear burglary while they are away from their homes, an even more sinister trend with a distinct name has become the new crime of choice. Home invasions, where criminals force entry when the house is occupied, are becoming the rule rather than the exception. Two, three, and sometimes four criminals will break into a home, heedless of it being occupied or not, to rob and terrorize the people inside. Home invaders are vicious, violent characters that have committed horrible atrocities against families including rape, brutal beatings, and murder. The liberal “give them what they want and they’ll leave” advice has seen innumerable citizens raped and murdered by home invaders. Long ago I was taught the 4 D’s of home security Deter, Detect, Delay, and Defend. Deter means simply this, be an unappealing target. As ruthless as modern criminals are, they are also lazy and cowardly vermin. If the effort or danger appears to outweigh the reward they will generally move on to an easier target.

Let’s start with the simple stuff; lighting. Is the exterior of your home well lit and do you have motion-activated lights? A dark, heavily shadowed home is an attractive target. After all, the bad guy doesn’t want the local cop on patrol to see him sneaking up on your house or loading your stuff into his truck. Also, if the outside of your house is well lit the bad guy doesn’t know whether or not you can see him approaching. That is one more risk they will have to take.

Alarms and the signs that go with them are great deterrents but are not an absolute defense. The alarm system provides you with detection of an intruder. However, keep in mind that when an alarm sounds the first thing the security company does is try to call the home to verify that it is not a false alarm. Only after they have received no response from the homeowner do they contact the police. Once informed, the police response could be five, ten, fifteen minutes or more depending on where you are located and whether an officer(s) is (are) available. Could you fight off three armed robbers for ten minutes?

Along the line of detect and deter, don’t disregard a four legged, free roaming intruder detection system. A good dog can go a long way toward deterring bad guys and warning you when they approach.

The Delay phase can be best summed up as “hardening the target”. Short of solid steel doors and barred windows, few domestic structures can keep out a determined intruder. The question is; how long can you delay them? Remember, home invaders don’t care if you are there to witness their actions. If they are determined to come in, make them work for it.The first and simplest way is to keep your doors locked, even when you are at home. Don’t unlock and open door for strangers. This isn’t 1955. Twelve-year olds have mobile phones today. The old “I need to use a phone” excuse is a ruse to get you to let them in. Don’t do it! Tell them through a locked door that your will call the police for assistance. If they truly have a roadside emergency they will want the police to help them out. No homeowner is going to sit around the house waiting and watching for an intruder–you need some kind of warning or reaction time. If an intruder decides to force entry they shouldn’t be able to do it quietly. A thirty-second delay is a long time when it comes to reaction time. A minute or two would be better.

Do your doors have solid, hardwood or metal frames? Do your dead-bolts sink an inch or more into the frame? Are ground-level windows single-sheet glass or are they much tougher plexi-glass? Determine just how tough it is to get into your house. If you ever locked your keys in the house and then “broken in” to it yourself, think about how long it took you, because a bad guy will likely go the same route.

The last resort, after other means have failed to keep an intruder out or away, is to defend your family and home with violent force. Yes, I said violent force. Now is not the time to be squeamish. The felons that smash in your door are not going to be timid. We’ve all known the guy or gal that kept a Louisville Slugger or Nine Iron by the front door “just in case”. That’s all well and good if your intruder is alone, does not have a gun, and is about the same size and strength as you. This is the real world. Your attackers will be younger, stronger, armed and accompanied by friends. Here is the plain, honest truth. The best defense against an active home invasion is violent force applied with a firearm. Which firearm is best for home defense? The answer is that it depends, as handgun versus long gun is an ongoing debate. Pro-handgun people point out the convenience and the fact that you can do things with your other hand; turn on lights, open doors, hold a telephone etc. All of these are true. A handgun is convenient, can be readily concealed from view and does allow you a free hand. However, we need to remember the intended purpose of the gun; to stop felonious attackers.

A friend of mine who runs a firearms training academy has stated that “a handgun is simply a rifle waiting to grow up”. A bit of an over simplification perhaps, but the fact remains that no handgun can generate the energy and effect that a centerfire rifle or defensive shotgun can produce.

Others have offered that we use a handgun to fight our way to the long gun. If you have a safe room or hold out room in your house it should most definitely contain a long gun of some kind. Nothing says “Get out of my home!” quite like a 12 gauge shotgun or centerfire rifle.

Keep in mind that you will likely be dealing with multiple felons. A single shot or even double-barreled shotgun would not seem as appropriate as higher capacity model. During a hyper-violent criminal action both the intruders and homeowner will likely be moving. Some of your shots may miss the mark. There really is no such thing as too much ammunition.

Keep in mind that you very well may be compelled to use deadly force. Long before you have to defend your life you must make the mental commitment to do what ever is necessary to save yours and your family’s lives. Don’t delude yourself thinking you can bluff a felon with a gun. You can’t. If you don’t believe you could press the trigger on a potential rapist or murderer, don’t buy a gun. For those who choose to keep one or more firearms for personal protection, get to the range and practice. Every responsible adult in your home should be thoroughly trained in the use of arms. The middle of a violent attack is not the time to try and figure out how the safety works or wish you’d spent more time practicing. Hope for the best, prepare for the worst. 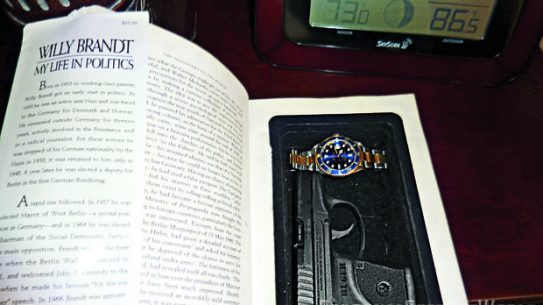