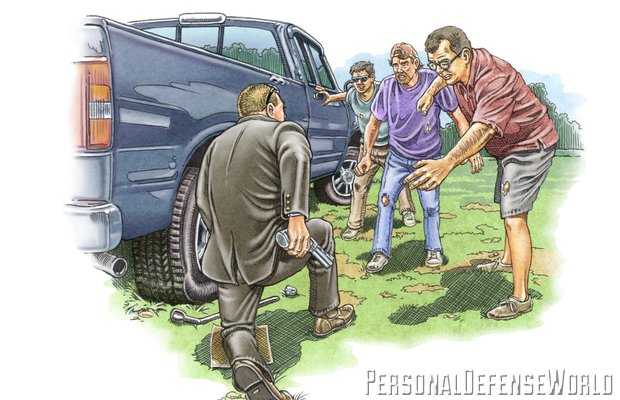 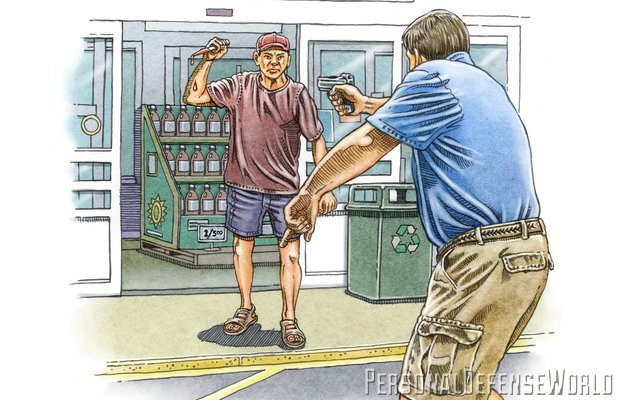 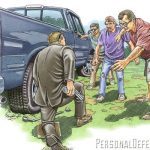 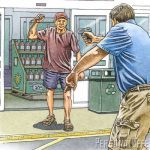 Editor’s Note: We pay $100 for each account we print. Send to the magazine, c/o “Police Stories.” Or e-mail to tactical-life@harris-pub.com

In the late 1980s, I was making a trip across Indiana when tragedy struck. The rear-passenger tire on my pickup went flat while I was going down the interstate. I pulled to the side of the road and surveyed the damage. Yes, I was going to have to change the tire right then and there. Thankfully, the flat was away from traffic—at least I didn’t have to worry about getting sideswiped. At the time, I worked for a driving business that required me to wear a suit. I cringed at the thought of changing a tire in it, but I had no other option. I made quick work and had the spare out and on the truck in no time. I just had to put the lug nuts back on.

Then an old, beat-up junker of a truck with trash piled in its bed suddenly braked and turned off the interstate just in front of me. I immediately realized that my wearing a new suit and driving a new truck may have marked me as an easy target. I reached into my truck’s glove box and pulled out the Rossi 851 .38 Special revolver I carried with me. I had been in possession of a CCW license for just a few years, and the Rossi was the only handgun I owned at the time.

I didn’t know the other men’s intentions, so I concealed my gun beneath my jacket. Three men piled out of the old truck: two were young, about 25 years old, while the third was an older man of about 50. They were all dressed in ragged clothes and looked like they hadn’t had baths in quite some time. I greeted them with a friendly hello. The older man seemed to be the ringleader and spoke.

He explained that they had stopped because they thought I needed some help. I politely declined, saying I was almost done and would be on my way in a few minutes. They said that was great and would stay just to make sure I got back on the road safe. Alarms went off in my head, but they hadn’t really done anything hostile yet, so I went back to putting the lug nuts on while trying to keep an eye on the three of them.

As soon as I bent down, the two young men began spreading out—one circled behind me. I was startled, and one of the lug nuts slipped out of my fingers, underneath the truck. I turned. The old man just smiled and asked if I was sure that I didn’t need help. I again declined and tried to put on another lug nut. Again, one of the young men circled in closer. The second lug nut slipped free and tumbled beneath the truck. I wasn’t about to crawl under to get it with the three of them standing around. And at the rate I was dropping stuff, I wouldn’t make it out of there.

I turned with my back to the truck and faced the three men, telling them very plainly and directly that I did not need any help. The old man started laughing and responded, “You dumb S.O.B., we’re not here to help you.” The boys started moving in.

I pulled the revolver, keeping it pointed at the ground, then said, “Boys, like I said, I don’t need any help.” It was a complete game changer. The three of them hightailed it back to their truck and peeled off, thankfully never to be seen again. I finished with the tire and drove home very thankful for the money I had spent on the Rossi, money that may have saved my life.

As a result of this experience I have carried concealed since then. Although new, more-expensive handguns have come and gone, I still have the Rossi .38 Special revolver as a memento of that fateful evening.

In late April of this year, a gun-carrying man stopped a knife-wielding man as he began stabbing people at a downtown Salt Lake City, Utah, grocery store.
Salt Lake City Police say the suspect purchased a knife inside the Smith’s grocery store and then turned that knife into a weapon. One Smith’s employee said, “He pulled it out and stood outside the Smith’s, in the foyer area, and just started stabbing people and yelling ‘You killed my people. You killed my people.’”

The employee said the suspect was not messing around. Apparently he was slashing, screaming and seriously injured two people. “There was blood all over. One person got stabbed in the stomach. Another got stabbed in the head, and as that man held his hands up, he got stabbed all over his arms.”

The suspect then went after other people as well, but before he could get to another victim, a man with a gun stopped the madness. The employee said, “A guy pulled a gun on him and told him to drop his weapon or he would shoot him.” The suspect complied. “He dropped his weapon and the people from Smith’s grabbed him.”

By the time police officers arrived, the suspect had been subdued by employees and shoppers. Police had high praise for the gun-carrying man who ended the hysteria. A lieutenant with the police department said, “This was a volatile situation that—from what we saw—could have gotten worse. He was definitely in the right place at the right time.”

Not only was he in the right place at the right time—but he also is a concealed carry permit holder. That is one of just a few facts we know about the man. We know he is from rural Idaho and just happened to be in Salt Lake City that day. He complied with the investigation and police say he asked them not to share his name. Since the stabbing, we also learned another fact: the man with the gun is also a man of compassion. A few days after the incident, I spoke to the father of one of the victims. He told me that the man came and checked on his son in the hospital before leaving town.

The victims are certainly thankful the Idaho man was there and had a gun. And dozens of other shoppers, who also could have become victims, are also thankful. Another person at the scene was still trying to take in the attack when we spoke with her. She looked over at her car and the blood on the driver’s door and said, “It’s really scary. Just five minutes before I walked out to my car—it could have been me.”

While we don’t know much about the hero, we do know that the suspect has a lengthy criminal record that spans 12 years. And it appears his crimes slowly escalated from minor to serious and violent. In 2000, the suspect was busted for criminal trespass. In 2004, he was busted for driving on a suspended license. He had a drug charge in 2009. Then, between 2011 and today, things turned violent: attempted aggravated assault, attempted assault on a police officer and sexual battery.

By the way, police say that the CCW permit holder followed all the training he had received in classes. Once police officers arrived at the scene, he put down his weapon and complied with all their orders and the investigation.

I’ve been a regular CCW holder in my home state of Virginia since 1996, and I’ve carried a variety of smaller pocket pistols. I was never quite satisfied with them until I finally came upon a great deal for a Kahr PM9 in 9mm. I set off to the range knowing this little gun needed a few hundred rounds to break in. To my pleasant surprise, it was very accurate and easy to control, even with my chosen defensive loads: Speer Gold Dot 124-grain +P rounds. Two weeks later, I took my family down to Florida with the Kahr PM9 resting in a High Noon pocket holster and a spare magazine in the other.

A desperate call to nature by my youngest son had me stopping at a small gas station with truck parking in the back. A quick scan revealed only one available parking space, between two vehicles and up against an earthen wall. The place seemed a little run down—probably not some place I would have chosen to stop, especially at night. But it was the only gas station nearby. I didn’t have any other choice at the time.

I sent my youngest in with his teenage brother, while the wife and I remained with our vehicle. With both of us standing outside on the passenger’s side, I noticed a rather scruffy-looking gentlemen on a bicycle pedaling from the truck park at the back of the gas station, at my two o’clock, coming right towards us. My eyes locked on him and I realized what a bad tactical position I was in—trapped between my vehicle, a vehicle to my left and the large earthen wall to my back.
With my wife between me and the approaching, potential threat, I pushed her by the small of her back into the back of our vehicle and closed the door. At the same time, I placed my hand firmly on the grip of the Kahr PM9 just as the cyclist stopped near our vehicle. I told my wife to lock the doors as he got off his bike and walked towards me, between the vehicles.

He took several steps towards me and started to speak, but I cut him off mid-sentence and said, “Whatever you need, I don’t have it! You need to move on right now!”

At that point, everything seemed to move in slow motion. I watched his hands intently and made a mental note that the background behind him was clear. He saw the intent in my eyes, recognized the authority in my voice, and noted that my hand was in my pocket. Unseen, I had the Kahr pistol almost completely out of its holster.

The man’s demeanor instantly changed. He threw his hands skyward and said, “O.K., O.K., no problem!” He quickly got back on his bicycle and sped off towards the way he came. I cautiously moved toward the end of my vehicle and scanned to ensure he had moved on and there weren’t any of his friends around. Soon after, my boys came back from the gas station and we were back on our way to Florida.

In the several years since this incident, I’ve learned to be more selective where we make our stops on trips, and I continue to remain vigilant. While I will never know what that gentleman’s exact intentions were, I was very thankful that I had a reliable weapon on me that gave me confidence. To this day, I continue to carry the little Kahr PM9 and never leave home or go on a trip without it.
—PB, VA 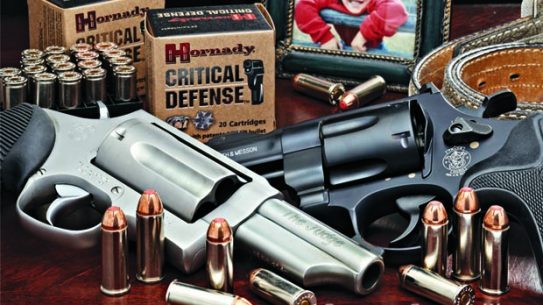 Editor’s Note: We pay $100 for each account we print. Send to the magazine,…