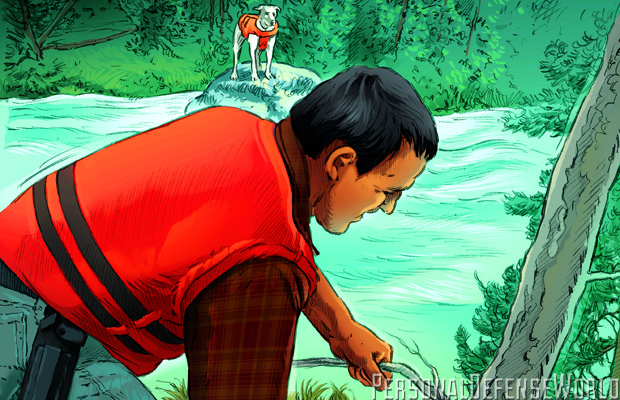 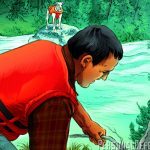 It had been storming the days before the canoe camping trip, making the river, nestled in the North Carolina Mountains, angry and treacherous. With the rain, the trip was cancelled, but the massive food cache I left on the island had to be retrieved. The food cache weighed about 50 pounds and had to be picked up before bears spotted it and made a mess. I had already been on the river a few times that week so I felt confident when I grabbed the dog, a long-bladed Becker BK-9 Survival Knife and a paddle.

The dog loves to swim, but I wanted to be safe in the turbulent water so I put on her life jacket, which also doubles as a very handy way to pick her in and out of the canoe due to the handle along the back. We made it to the site, and I secured the food caches in the drybags to the thwarts of the canoe. The water was noticeably more treacherous than it was earlier that week and I had found a bent paddle on the island, the obvious remnants of someone else’s misfortune. Along the river, large logs were floating down and near the bridges, massive islands of driftwood had accumulated. I should have taken it as warning but I didn’t.

There was a particular set of shoals that had killed people in the past but normally I paddled to the right in between a shallow outcrop down a shoot safely. Predictably, I went that routeï¿½big mistake! The rocks on the left were just about flooded over and the normal areas I navigated by were unseen, swallowed up by the churning water. I rounded the peninsula only to find that a massive wedged log under that rock had created a strainer that desperately needed to be avoided. Water disappeared under it and over it in a loud, hammering turbulence. In a maneuver that happened far slower than I would have believed it, I was wedged 90 degrees to the sieve between the log strainer and the rock in the middle of the river. The water was slowly pillowing the boat over, making it creak and whine under the tremendous stress. As we went over, I knew the dog would be in trouble vest or not, so I grabbed the her by the handle of on the jacket and lightly tossed her on the rock outcropping in the middle of the river on the right. “Stay!” I yelled and she obediently sat down on the rock shivering. It was loud, wet and terrifying as I shuffled out of the boat onto the rock but right before it was about to go over it righted itself, dislodged and started to float away from me! I desperately lunged for the rope tied to the stern but missed. My dog gave me a sad look that said, “Aren’t we supposed to be in that thing?” as the canoe floated away in the churning current. We were stuck on the rock before I even knew what hit me. I looked at the dog, yelled, “Stay!” over the loud whitewater, and then floated down the river, trying to keep my feet pointed up but badly scraping everything else on me as I ricochet off the many unseen boulders. Bloody and battered, I caught up to the boat and landed it safely while keeping full view of the newly stranded family pet.

I came back upstream of the dog and tried to float to her rescue. Several attempts to rescue her with the boat failed. The rock was smooth and hard to get on with the water pushing any chance, even behind it. The boat almost got wedged a second time but with all my strength I got it undone. The next step was trying without the boat but the water was so fast and turbulent at that point I almost got pinned myself. I had to think fast, so I ran over to a sycamore sapling stand and picked the longest, thickest one. The tree was thicker than my neck but the 9-inch blade Camillus/Becker BK-9 sunk deep into the sapling, bringing it down in a few swings. Holding the handle of the BK-9 near the back, the big branches were removed so it didn’t catch water. After a few tries, I finally wedged it in a corner under the front of the rock, with the other end in wedged in a root system by the shore. The ramshackle sapling wouldn’t last long with the resounding force of the river pushing from all sides.

With the tree acting like a make shift railing I was able to stumble over to the rock, though I couldn’t stand in what was normally shallow water. The railing held but my feet barely did. The rock was a good 25 feet of rolling white water away so I was surprised that the railing held. Soaked to the bone, I made it to the rock where Sheila greeted me whining and lightly wagging her tail despite how scared she was. My first plan was to grab her and try to keep her afloat while I banged down the river again. Instead of that potentially deadly option, I held the dog under one arm, cradled the railing, and safely waded back to the shore. I was happy to see that the sheath held the knife without me having to worry about it, as I had lost knives on rivers before. Without a large chopping knife like the BK-9, I don’t know how I would have gotten out of that situation so easily. Now every time I canoe, I am sure to have a big knife or machete at my side. 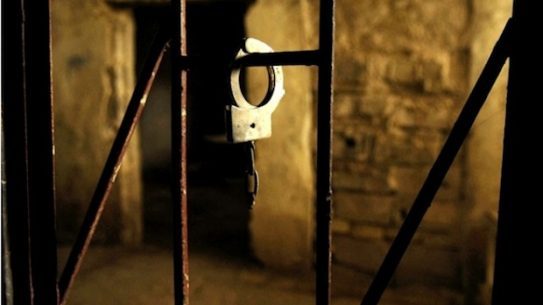 It had been storming the days before the canoe camping trip, making the river,…