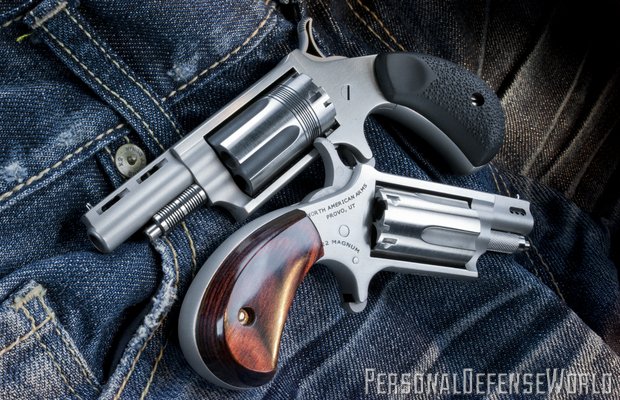 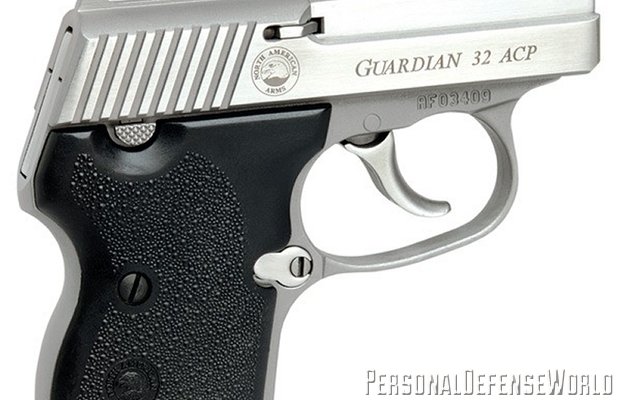 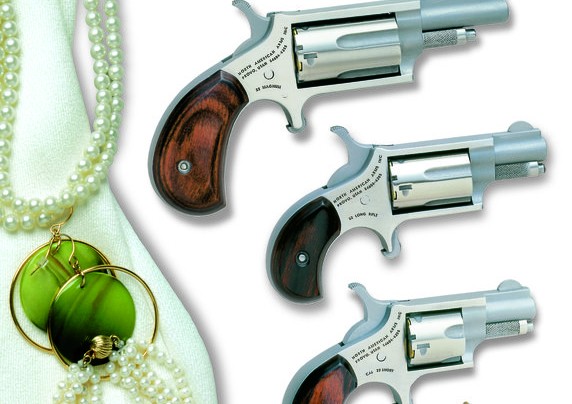 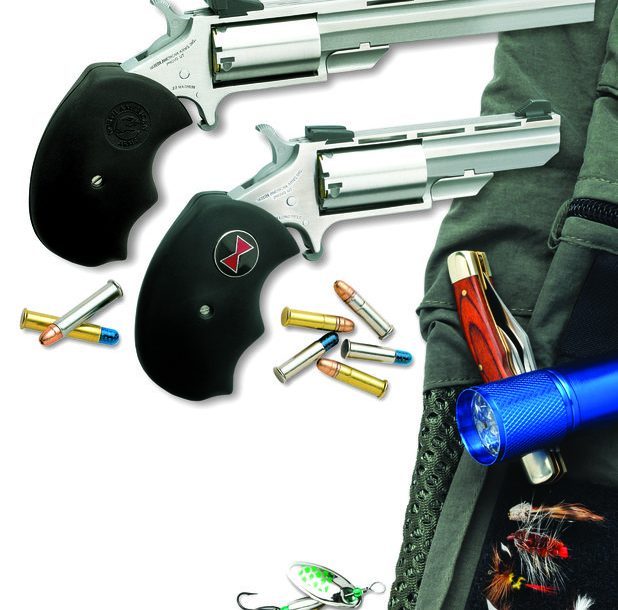 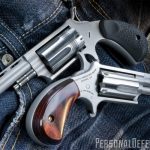 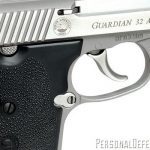 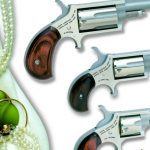 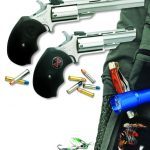 Nestled in the mountain valley of Provo, Utah, North American Arms is busily producing some of the smallest defensive handguns available for concealed carry. Since 1971, this company has been taking the “American” in their name seriously. The parts and processes that go into their products are generated here in the United States, many of them right in-house. The guns they sell fall into two general categories: Mini-Revolvers and Guardian semi-auto pistols.

Two NAA Mini-Revolvers get the gold star for being among the smallest handguns available. They push the limits of how compact a handgun can be while maintaining the ergonomics needed to successfully run it. After examining the NAA .22 Short revolver, almost no other handgun seems to deserve the title of “tiny.” As the smallest of all the NAA revolvers, the .22 Short has a 1.13-inch-long barrel, an overall length of just 3.63 inches, and weighs in at an astounding 4 ounces. This truly tiny gun is small enough to hide under a standard-sized Post-It note.

If you want to take advantage of the plentiful and affordable supply of its namesake ammunition, the .22 Long Rifle frame is available. Making room for the slightly longer .22 LR cartridge only adds a half-ounce of weight and 0.38 inches of length when compared to the .22 Short. Unlike some of the .22 LR pocket autos on the market, this revolver boasts a very low level of ammo sensitivity. The .22 LR Mini will reliably ignite a wide variety of .22 fodder, including low-velocity loads, practice-grade ammo, shotshells, .22 Short, and .22 Long rounds. This model is available with either a 1.13- or 1.63-inch barrel.

If you want to boost the stopping power of the Mini without much of an increase in size, take a look at the revolvers chambered in .22 Magnum. NAA’s standard Magnum-frame revolvers have 1.13-inch barrels, an overall length of 4.75 inches, and weigh in at 5.9 ounces. NAA also makes 1.63-inch barrels available for these models as well.

Two recent additions to this line include the Ported and Wasp models. You might think that ports on the barrel of such a small gun, with modest recoil, would be purely decorative. However, when firing full-power .22 Magnum loads, the ports will reduce felt recoil by 30 to 40 percent.

The Wasp is a slick NAA revolver offering a full set of custom features without a significant increase in the revolver’s price. Features include a vented barrel rib, bead sight, skeletonized hammer, rubber grip, and black-enameled engraving on the cylinder and cylinder pin. The result is a classy and functional little gun.

It should be noted here that because of the dimensional differences in the cartridges, .22 Long Rifle should not be fired in NAA .22 Magnum cylinders. Instead, North American Arms offers .22 Long Rifle conversion cylinders for all .22 Magnum frames. If the model you are interested in doesn’t come with this second cylinder, you can order a new gun with the cylinder included or send your Magnum to the factory to be fitted with one.

All of the Minis mentioned so far have short barrels and abbreviated grips to facilitate ease of concealment. But just as NAA Minis fill an important niche for self-defense, the long-barreled models are unique offerings ideal for use as trail and kit guns. These include the Mini Master and the Earl.

The Mini Master features a 4-inch heavy barrel, full-size target sights, an unfluted cylinder, and a hand-filling rubber grip. At the range, this revolver has demonstrated the same accuracy potential as full-size revolvers with the same barrel length.

The Earl, available with a 3-inch or 4-inch barrel, is designed to look like a miniature 1850s black powder gun. It features a hexagonal barrel, post sight, unfluted cylinder, and a rosewood boot grip. The Earl is both good looking and accurate. The 3-inch model is ideal for dropping in a backpack pocket or in a fishing tackle box.

Because of the Minis’ exceptionally small size, North American Arms has been clever about generating a variety of methods to carry their products from Point A to Point B. As one would expect, they provide a selection of pocket, belt, inside-the-waistband (IWB), shoulder, and ankle holsters. But here are some options you might not have thought of.

Stellar Rigs has designed the Neck Chain Rig. This is a Kydex holster that clamps the Mini to a stainless steel ball chain that can be worn around your neck. Then there’s the NAA Holster Grip. This oversized polymer replacement for the factory grip allows the revolver to be folded down against it, like the blade of a pocket knife, and then tucked into a waistband or pocket. And finally, if you just need to let it all hang out, you can clip the 1.13-inch-barreled .22 Long Rifle Mini into one of NAA’s western-style cowboy belt buckles. This is one of the most unique forms of open carry available. Just make sure you have all the necessary carry permits in place before you head out for a night on the town.

In 1997, North American Arms decided to make a paradigm shift in their product line by introducing the Guardian semi-autos. The Guardians feature an all-stainless steel construction, a smooth double-action-only trigger, 6+1 shot capacity, and, unlike some similarly-sized pocket autos, they will successfully feed both ball and hollow-point ammunition.

The line was launched with the still-popular small-frame Guardian in .32 ACP, featuring a 2.18-inch barrel, 4.36-inch overall length, and an unloaded weight of 13.57 ounces. In 2001, the .32 was followed by the “large” frame model, which was beefed up to accommodate the .380 ACP cartridge. This process only added half an inch to the overall length and 5 ounces to the unloaded weight.

To improve the stopping power of the Guardians without further increasing their size or weight, North American Arms teamed up with CorBon ammunition to produce the .25 NAA and .32 NAA pistols. The .25 NAA is a .32 ACP cartridge necked down to accept .25-caliber bullets, while the .32 NAA is a .380 ACP case necked down for .32-caliber bullets. These bottlenecked rounds shoot smaller bullets at higher velocities for enhanced performance.

I’ve had the opportunity to work with handguns from every segment of North American Arms’ offerings. One thing that has held true for all of the guns I have shot is the obvious dedication of this company to providing their customers with high-quality, reliable handguns for personal protection. These little guns may not be the most powerful defensive options on the market, but they can be counted on when you need them the most. The NAA Mini-Revolvers and Guardian pistols are the most likely to be with you when larger or heavier guns get left at home. 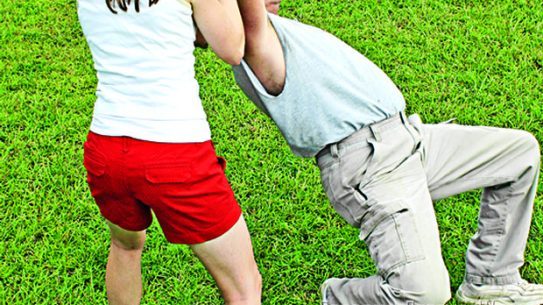 Escape From A Rear Choke