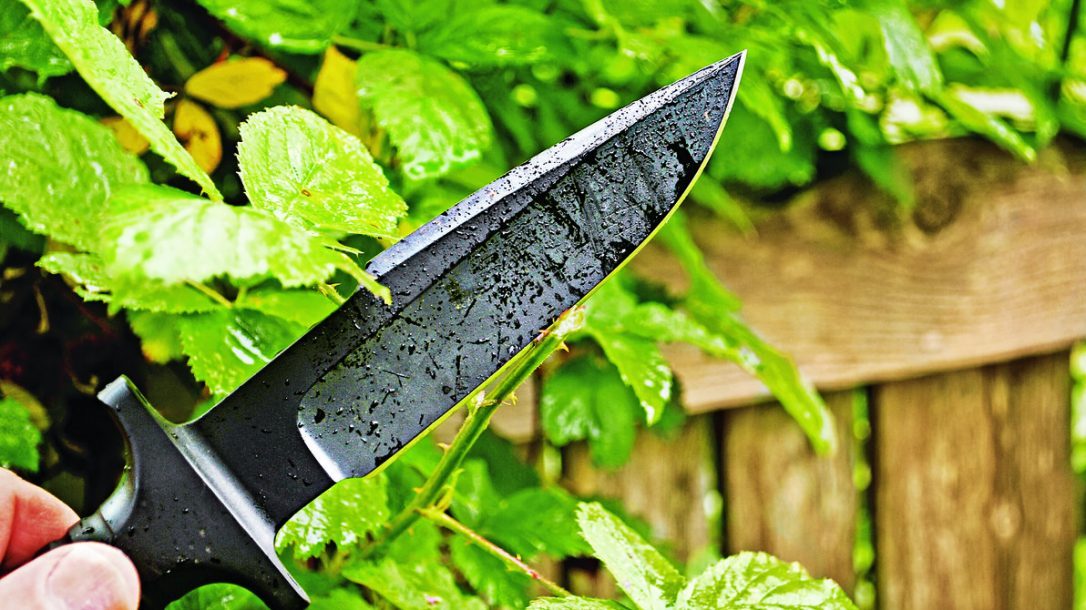 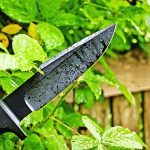 A short time ago I got a call from a good friend of mine who is a former 2nd Battalion, 75th Ranger and now serves as a police officer and bomb technician for his department. He asked if I was familiar with the knives being made in Idaho by another former U.S. Army Ranger. I was not, but a quick check on the Internet and a phone call later I was talking to Andy Franco of Calico Forge.

Franco served in the 2nd BN/75th Rangers, worked as a crab fisherman in the Bering Sea, as a ranch hand in the North Idaho, a fur trapper in Montana and now as a blacksmith/knifemaker. All of his jobs were rugged, outdoor jobs—which is why he, “feels knives should be sharp, rugged, tough, practical and look good.”

Franco’s first love in knifemaking is for military blades and the folks whose jobs will take them to places where they will need tools that will not let them down. After examining and evaluating his knives, he has more than achieved his goals.

There are now a total of nine knives in his MK series. The MK 41 Airmen was designed with input from the U.S. Army National Guard’s 1/183 Apache Attack Helicopter Aviation Battalion in Boise, Idaho. Franco gets input from all types of potential users, from pilots to Rangers. The Airmen I examined has a clip-pointed blade that is 4.75 inches long, with a handle that is about 4.5 inches long. Meanwhile the MK 45 Fighter sports a blade just over 6 inches long.

Both knives are made by stock removal from 5160 carbon steel at a HRC of 58 have clip-pointed, hollow-ground blades, double-guards with lashing holes, and case hardened steel pommels with a conical glass breaker. In addition, both blades have a Mil-Spec parkerized finish that eliminates reflection of light and protects the blades from corrosion.

The construction of the handle is somewhat unusual. After the blade is ground out, the guard is slipped over the tang, then a metal reinforcing tube is slid over this, followed by a stack of 0.25-inch thick Micarta washers. Each are epoxied together, and when fully assembled, allowed to cure under pressure. The end of the tang is threaded, and a metal washer is placed over it, and epoxied to the Micarta washers. Before the pommel is attached, more epoxy is poured down into the space between the metal reinforcing tube and the tang. Then the pommel is epoxied and screwed on. The pommel is “tuned” so that when completely tightened, its sides are parallel to the sides of the washers. Then a hex screw is inserted through the pommel, epoxied and screwed into the metal washer on top of the Micarta washers. I hate to say something will never fail, but it is going to have to be something very extreme to get this handle to come apart.

The X46 is unique in that it is made from a 2.5-inch round bar of A2 carbon steel and is all one piece. It has a hollow handle, for storage of critical survival items. Some hollow handled knives are notorious for breaking, as they had a very short tang, often poorly welded to the guard. With a one-piece, hollow-handled knife, that problem is eliminated.

The X46 has a 6-inch long hollow ground, clip-point blade with a sharpened false edge and a double guard with lashing holes. Its grip features a hollow tube handle 4.75-inches long with a case hardened steel pommel equipped with a conical glass breaker and a waterproof/airtight cap. While the MK 41 and the MK 45 has a Mil-Spec parkerized finish, the X46 has an Armor Black Cerakote finish. Both finishes proved to be very effective and tough.

In my talks with Franco, he assured me the X46 was a rugged knife that I should feel free to use and abuse. Right out of the box, it would shave hair off of my arm (so would the MK 41 & MK 45), which is always a good sign. I examined the storage compartment in the hollow handle and was able to put water purification tablets, a small metal match, and several strike-anywhere matches in it. You have to consider where you will be operating to decide what to carry for survival purposes. In this case, I thought the X46 would give the ability to make a shelter and to start a fire.

I tried out the X46 making a pot hanger, using my old French mess kit that I carried for many years while serving in Army Special Forces. The X46 made short work, cutting into some cherry wood branches and soon I was suspending that mess kit with a full liter of water in it. I made a fish gig out of bamboo using the X46 to first split the end of the bamboo pole, force a small chunk of wood into the cut to keep the pole spread apart, and cut rudimentary barbs on the end of the two parts of the pole. I also made a survival spear, as it is preferable to have your sharp point at the end of a 6-foot long pole if you are trying to keep wild animals (four- or two-legged variety) at bay.

Later I chopped through a variety of seasoned and green hardwood, cut stakes for the pot hanger, chopped through 3-inch-thick pieces of firewood, stripped branches and used the X46 to baton kindling. All of these tasks were performed with no problems. I also cut down some thin blackberry vine branches—one flick of the wrist and the branch was cleanly cut, an indication of sharpness and good edge geometry.

Stabbing into a box full of tightly wrapped jeans, with cardboard and heavy leather on top, showed the X46 had excellent penetration. I did notice that when I got carried away with chopping, the butt cap would start to come lose. When I mentioned it to Franco, he said they had also discovered that problem and had tightened up the tolerances and had corrected the problem. When the edge started to drag a little, a couple of strokes on my EZE-LAP medium diamond hone had the blade back to shaving sharp.

The standard sheath supplied with these knives is an excellent Spec Op sheath, but Franco does offer the option of an upgrade to the CF-Aviator Leather sheath. This sheath is reminiscent of the U.S.-issue pilot’s survival sheath only much better. Made by Gfeller Casemakers, of Meridan, Idaho, it has a Kydex reinforced tip, a pouch for a sharpening stone, is Molle compatible and has a plastic stiffener inside the back piece of leather. I was very impressed with the leather sheath, but asked Franco why in the age of ballistic nylon he had designed it? Franco answered he had customers that just would not take “No” for an answer when they asked for a leather sheath. This upgrade is an extra cost and is available for all the Calico Forge knives.

Any of these knives are the kind you could buy when you first entered the military, serve 20 years and still pass them on to your son when he went into the military. If you are looking for a “Bomb Proof” knife, that can take the hardest of beatings and not let you down, check out the knives from Calico Forge. 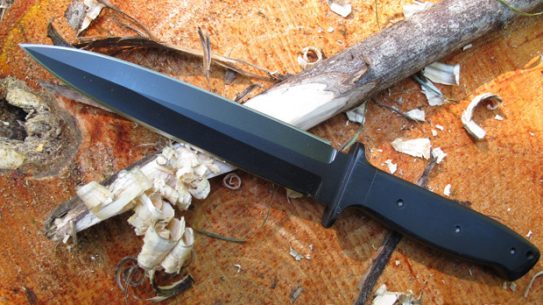