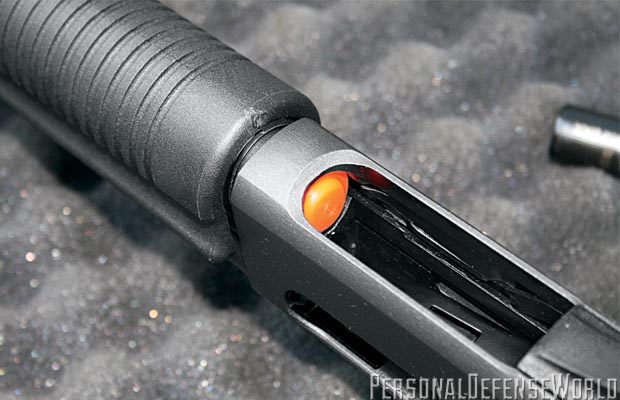 1 of 4
PDWShotgunammo 2
A blaze orange follower in the magazine tube clearly shows when the Express Tactical has run dry. 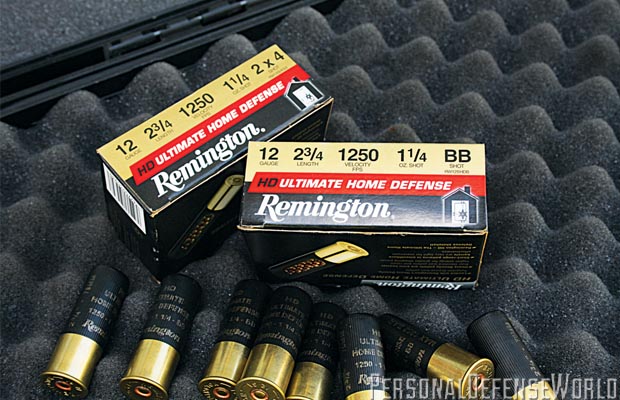 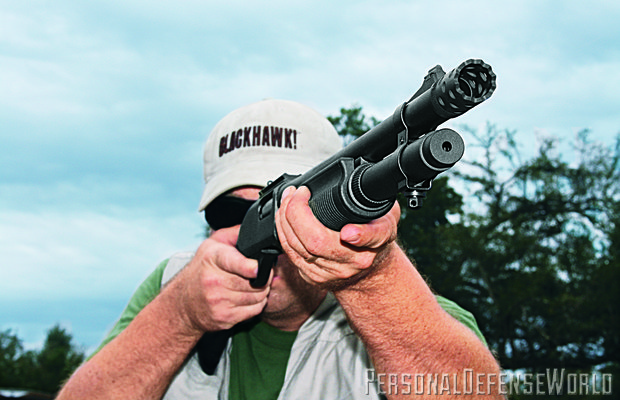 4 of 4
13_phatchfinal
Any quality shotgun you’re familiar with that is maintained on a regular basis, may be the perfect home defense weapon (not to mention legal almost anywhere!). Consider upgrading your 870, Mossberg or the likes, at quality places like Wilson Combat. Their custom upgrade packages can’t be beat! 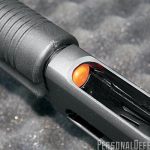 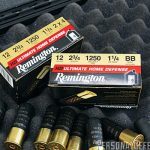 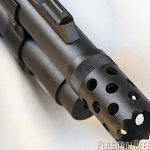 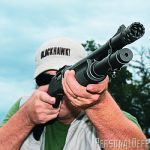 “Homeowner confronts burglar with a shotgun.” “Robber hospitalized after homeowner opens fire with shotgun.” “Man with shotgun kills burglar in his house.” These are just a few examples of headlines I discovered while conducting research for this piece.

For as long as the shotgun has existed, it has been the icon of versatility. You can hunt quail in the morning and defend the homestead at night. It’s impossible to know for certain whether the original shotgun was invented as hunting tool first and defensive weapon second or the other way around. Suffice it to say that the defensive shotgun is here to stay.

During any conversation about combat or defensive shotguns the name “Remington” is going to come up. For years the 870 has been at the forefront of the defensive shotgun world. As with any area of endeavor—cars, planes, televisions, power tools, etc.—firearms are constantly evolving in form and function.

Remington’s new 870 Express Tactical is a fighting shotgun packed with custom features. At the heart of the gun is the tried and true Remington 870 receiver and action, machined of solid steel, and the pump action is famous for reliability.

Like most other Remington Express guns, the 870 Express Tactical will chamber both 2 ¾ and 3 inch shotshells of all varieties, including bird, buck, and slug. The barrel is 18.5 inches and at the business end you will notice a unique accessory. New on all of Remington’s Express Tactical guns is their “Tactical Extended Rem” choke tube, a device with round vents and a mouthful of sharp “teeth.” In the police tactical world, we call this option a “standoff.”

A standoff or, in Remington’s chosen vernacular, an “extended choke,” serves to vent off propellant gases in all directions thus preserving the integrity of the muzzle. If you were to fire a standard barrel shotgun at contact distance the gas would almost certainly split or rupture the barrel. The standoff prevents this.

When it comes to defensive shotgun, one phrase I learned years ago was “If you aren’t shooting it you should be feeding it.” This merely illustrates the fact that the pump action shotgun is a relatively low capacity weapon when compared to a modern rifle or pistol. A standard police “riot gun” holds four or five rounds in the magazine tube. The Express Tactical has a “plus 2” mag tube extension, making the capacity for this shotgun seven, plus one in the chamber. Remington has included a blaze orange shell follower in the magazine tube as well.

Regarding furniture, the Express Tactical has a black synthetic forearm and stock; both are designed to provide a solid hold on the gun. The stock has a molded sling mount and a forward sling swivel is found on the magazine tube extension clamp. This particular Express Tactical shotgun was finished in a “blasted black oxide.”

Atop the receiver and barrel you will find and excellent fighting sight combination. The front sight is a large white dot XS express sight. On the receiver Remington has mounted and XS Sights Picatinny rail with Ghost Ring rear sight. The large white dot is extremely quick to pick up, which allows for fast follow up shots on multiple targets.

1 of 4
PDWShotgunammo 2
A blaze orange follower in the magazine tube clearly shows when the Express Tactical has run dry.

4 of 4
13_phatchfinal
Any quality shotgun you’re familiar with that is maintained on a regular basis, may be the perfect home defense weapon (not to mention legal almost anywhere!). Consider upgrading your 870, Mossberg or the likes, at quality places like Wilson Combat. Their custom upgrade packages can’t be beat!

Like the chicken or the egg, which was first—Remington’s tactical shotgun or specialty ammo? Doesn’t really matter, but what does matter is the devastating lethality of the combination.

Remington currently has two loads in their Ultimate Home Defense category. These 12 gauge shotgun shells are 2¾ inch with high brass and black plastic hulls. Two different shot loads are available; HD BB’s or the duplex #2 / #4 Buckshot. Each Home Defense shell packs a 1¼ ounce shot payload and they are loaded to 1250 FPS from the factory.

As this is home defense ammunition, it can legitimately be considered a “specialty” load versus general purpose. A practical range would be around fifteen yards. For comparison purposes I measured off the longest field of view in my house, the main north south hallway, where the distance was approximately twenty-three feet. Call it eight yards.

For an external shot, I measured the distance from my front door to the front gate. This distance was ten yards. Any uninvited person on the inside of that gate could be considered a true threat. So, for all practical purposes an effective combat range of ten to fifteen yards would be just right.

For patterning purposes, I decided to fire both of the HD loads at seven and fifteen yards. Using the BB load first, I fired onto a paper silhouette from seven yards. The average pattern spread was about seven to eight inches with a couple of flyers. Out at fifteen yards the BB’s patterned over the
entire chest area from shoulder to shoulder, nearly seventeen inches.

Using the 2×4 duplex load the seven-yard shot patterns averaged again around seven to eight inches and the groups were denser than the BB. Moving back to fifteen yards, the 2×4, like its brother, filled the center chest area with holes. Average patterns were fourteen to fifteen inches across.

After the pattern tests I decided to move on to more dynamic shooting. Stuffing the magazine tube to capacity, I engaged silhouettes in rapid succession. I wanted to see how fast I could push the pump action so I asked my son, Jarrad, to work the Pact Timer for me. On the beep, I would fire three rounds of the Home Defense load into a silhouette as fast as I could get on target. My average time was 1.7 second for three shots on paper from ten yards.

The pump action, though brand new, was smooth and sure enough to reliably cycle as fast as my hands could work the action. I have no doubt that a proper break-in period would see the action smooth up even more.

Loading with lead birdshot I went to work on steel pepper popper targets. That’s always fun. The 870 ran as expected with no feed or cycling issues whatsoever. The XS Sight system is easy to pick up in most any light condition and it gets you on target fast.

Whether the shotgun was first a fowling piece that became a defensive tool or a devastating weapon that became a hunting gun I cannot say. Regardless, the defensive shotgun is used on a regular basis by homeowners to protect their lives and families.

The new Express Tactical model from Remington takes this reliable defensive tool and enhances it. This gun is just as reliable as any 870, but with improved features. Combine that with the new Home Defense ammunition and you have a lethal combination. 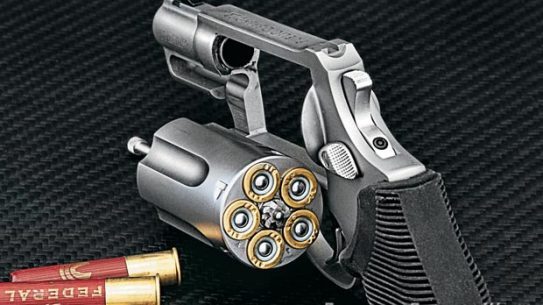