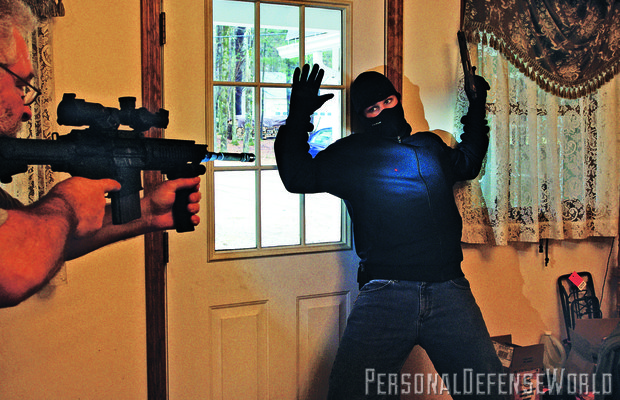 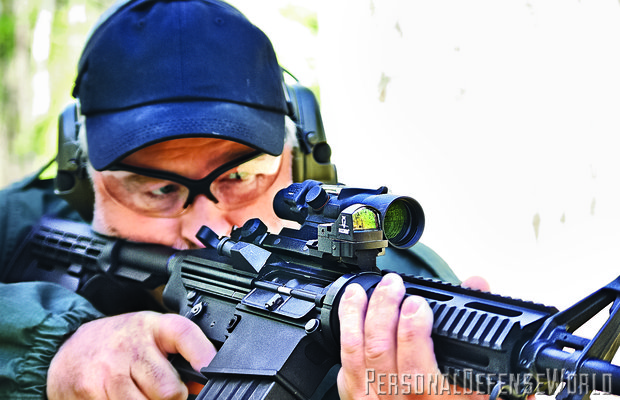 2 of 5
SIGHTS BATTLE D8065_phatchfinal
Note how the author’s rifle is turned to allow using the red-dot sight for close, fast-action shooting. 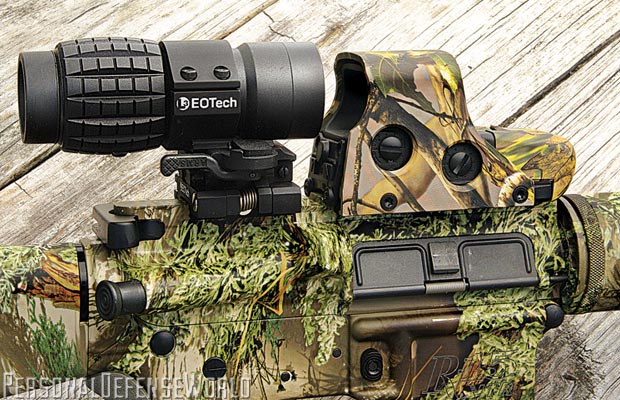 3 of 5
PDWSightsOpticsCamo
EOTech Holographic sight with magnifier that flips to the side for zero magnification, or behind for a magnified view. 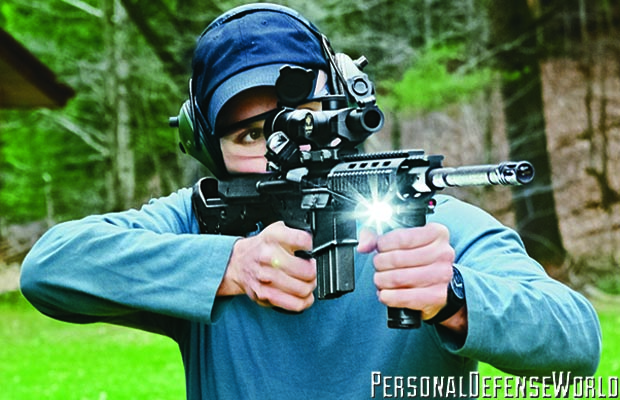 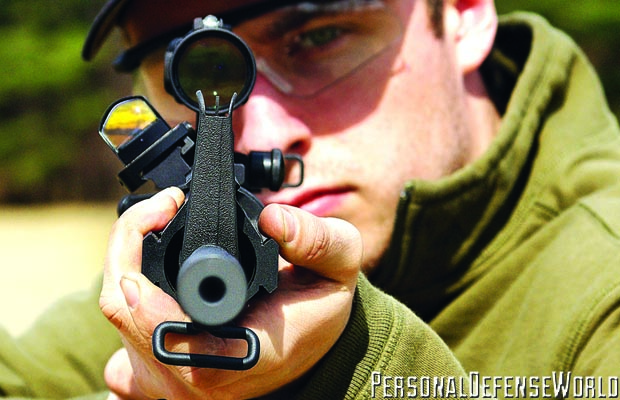 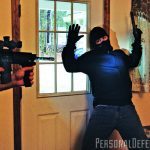 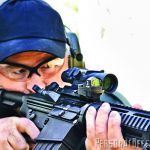 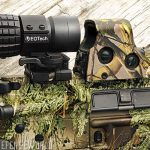 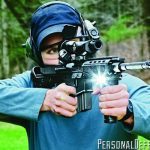 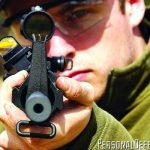 A buddy of mine works in an environment that’s right out of our worst nightmare. When Orwell wrote, “We sleep safely in our beds because rough men stand ready in the night to visit violence on those who would do us harm,” he was speaking of someone like my friend. Each day he puts himself in the worst possible situations so we can live our lives in peace. He is well trained, vastly experienced and very gun savvy. He once told me, “I carry a handgun so I have something to use while I fight my way to my rifle.”

When it’s all on the line and particularly when there’s more than one opponent, a rifle is by far your best option for survival. It doesn’t matter the cause—social collapse, a severe weather event, a terrorist attack. When it all falls apart and the hordes descend, there will be only you to depend on for your and your family’s safety.

Handguns are easy to carry—that’s their primary advantage. The cold, hard truth is that a handgun is far inferior to a long gun in a prolonged fight. If that weren’t so, our government would only issue pistols to our troops. They don’t: they issue rifles.

A shotgun is a good choice for dealing with a simple home invasion but not for a social collapse. Most tactical shotguns will hold under 10 rounds of ammo, are very slow to reload and will turn into expensive and inefficient clubs once you shoot them dry.

When there are multiple attackers and you’re fighting at varying distances, your best bet is a defensive rifle. Not a deer rifle that holds three or perhaps five shots but a battle rifle with a removable high-capacity magazine. An AR can hold as many as 100 rounds in the magazine, and a trained shooter can change magazines in 1 or 2 seconds. You are in the fight as long as your ammo holds out, so choose your rifle wisely and make sure you have plenty of ammo and spare magazines.
Remember, the best rifle is only as good as its ability to hit—spray and pray is not going to work. You need to have sustained aimed-fire. You may have to make a 200-yard precision headshot at a sniper who’s hiding behind cover or deal with multiple attackers charging from 20 feet. Not all sighting options can deal with that wide a range of variables—each has its pros and cons.

A good variable low-power scope will provide the most options. Pick one that’s tough and with clear optics. Although they are not currently in vogue, I much prefer second focal plane reticles that remain the same size throughout the power range. That means that, at the higher magnification, it’s easier to make that precision shot and your reticle is not covering up most of the target.

Illumination can be helpful, but is not necessary. However, an illuminated dot in the center, particularly one that’s visible in daylight, is very handy with a true 1X scope. It can be used like a red-dot for the close-range, fast-moving targets. Keep both eyes open and focus on the target, letting the dot float in your vision.
I was recently doing some practice drills with that technique. We had three targets at 15 yards, rifle at low ready—at the buzzer, double tap each target. My best time was 1.3 seconds, reacting to the buzzer and placing six shots on three targets.

The JP Enterprises rifle I used was equipped with a Swarovski Z6 1-6 Illuminated scope with a BRX reticle, my first choice for a defensive scope. This scope provides the widest range of options of any defensive-rifle sighting system.

Another excellent choice, at about half the price of the Swarovski, is the new Weaver 1-5X Tactical. The optics are clear and the scope is very user friendly. Like most of the new tactical scopes hitting the market, the reticle is first focal plane, so it changes sizes through the power range—it’s well-designed for that use and works well at all settings.

Red-dot sights are the fastest sights available for close-quarters battle. I know. I have tested them against every other type of rifle sight, using multiple shooters and a timer. The red-dot beat everything. But then, competition shooters have known this for years—nothing is faster.

The downside is that red-dots are almost always zero magnification and the dots can cover a lot of the target. This is not good for a precision long-range shot. You can add a magnifier that can be flipped out of the way, but the dot becomes even bigger. Red-dots also use batteries, which can go dead. At one time this was a big problem, but the newest generation of Aimpoint and perhaps others uses battery technology that has life up to seven years.

While a red-dot is not a horrible choice for a primary sighting system, I think they work best as a secondary sighting system on a home-defense gun. By mounting them on a 45-degree angle on the side of the gun, they can be accessed very quickly for backup or for QCB work. To use this setup just keep your cheek on the stock and rotate the gun counterclockwise to align your eye with the red dot. It’s fast and accurate.

An Aimpoint Micro mounted on the side of your rifle using a Warne Ramp mount or JP Offset Adapter is a good option. If you prefer the reflex-style sight, the JPoint from JP Enterprises is great.

2 of 5
SIGHTS BATTLE D8065_phatchfinal
Note how the author’s rifle is turned to allow using the red-dot sight for close, fast-action shooting.

3 of 5
PDWSightsOpticsCamo
EOTech Holographic sight with magnifier that flips to the side for zero magnification, or behind for a magnified view.

These work much the same as red-dots: they usually have no magnification. That said, a holographic sight has more control over the size and shape of the reticle, so it is friendlier to adding magnification.

The EOTech sights are very responsive to adding a magnifier. These magnifiers will flip out of the way for CQB and then flip back into place to add 3X magnification for a longer shot.

The downside to holographics is battery life—it can be short. If you are the type to set a schedule for battery replacement and stick to it, the holographic sight is not a bad option.

The Trijicon ACOG is one of the most popular battle sights for troops in the sandbox. It comes in a variety of fixed-power magnifications from 1.5X to 6X and with several reticle options. In all but one model the reticle is illuminated, but there is no battery. The scope uses fiber optics and tritium so that the reticle is visible and bright under any lighting conditions. The reticles for the higher magnification models are designed for long-range shooting and will have multiple aiming points on the descending arm.

The downsides are the fixed magnification and the price. ACOGs are not cheap. One good option to deal with the fixed magnification issue is to add the Trijicon RMR reflex sight on top of the ACOG, for use in CQB. It takes a little practice to use a high-mounted reflex, but with training they are very fast. Or you can mount it on the side using a JP offset adapter so you can roll the gun and keep your cheekweld.

On a home-defense rifle, iron sights are a poor choice. That’s not to say you should not have irons on your gun—you should. But they should not be your primary sighting system. They are tough to see and require your eye to focus on the front sight rather than the target. This is not conducive to fast and accurate shooting under poor lighting conditions.

But it’s not a bad idea to have iron sights on the gun as an optional backup, for when all else fails. I much prefer the flip-up style sights that can fold down and out of sight until needed. You can use them with an installed non-magnifying optic by simply looking through the optic. Or if the scope is mounted in a quick-release-style mount like the LaRue, it’s easy to flip the levers, get rid of the scope and pop the sights up.

I think every rifle and handgun used for home defense should have a laser sight. While not designed to be a primary aiming system, they are a useful secondary system.

A laser sight is very fast to use and allows shooting from odd positions. This will let the shooter stay behind cover, exposing only the gun to make the shot. Its deterrent feature alone is worth the laser’s price: when you put that bright dot on a zombie’s chest, he knows what it means, and often the result is that you don’t have to shoot—a good thing.

The laser’s visibility is also a downside, as it can give away your position. And because lasers use batteries they are subject to Towsley’s law, which states among other things that “a battery is never dead, unless it’s at the most inconvenient time possible.”
One inexpensive option is the Laserlyte rail-mounted laser. My number one choice is the Crimson Trace Modular Vertical Foregrip. This combines a laser with a bright flashlight on a vertical grip that mounts on a rail. It’s available with the traditional red laser or the more powerful green laser.

Every home-defense rifle needs a weapon-mounted light. The Crimson Trace mentioned above is a great choice. SureFire pioneered the high-intensity, high-quality, compact-flashlight market, and they offer several options for rifle-mounted lights, including some that include a laser.
No matter what you select for your sighting systems, practice, practice, practice. Don’t just go to the range on nice days and practice what you like. Practice the stuff you hate because that’s probably what you do worst. Shoot in poor light, in bad weather and at night if you can. Practice shooting on the move and from awkward positions. Learn to shoot from under a car, from off a pitched roof and from behind barricades. Learn to shoot right-handed and left-handed. Don’t be afraid to shoot a lot. The guns are made to take it and ammo is cheap compared to a funeral. 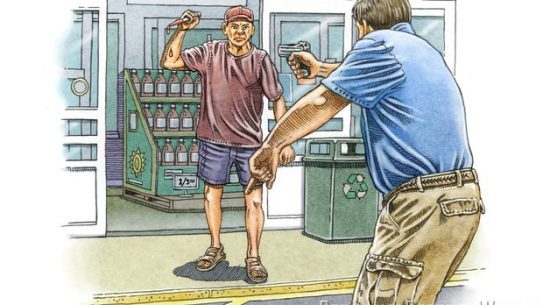 “It Happened To Me!”