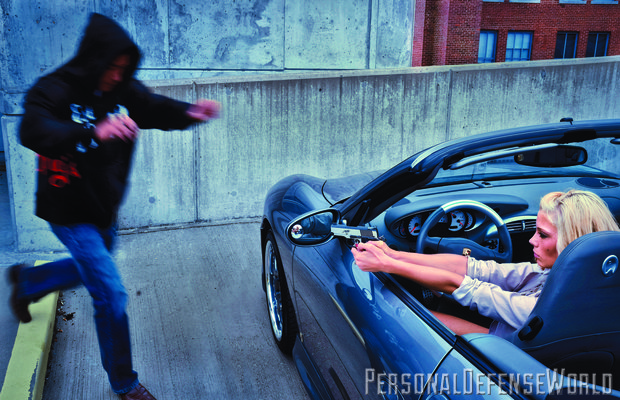 1 of 2
ROAD LEAD_phatchfinal
To defend yourself from inside a vehicle—moving or parked— you need awareness, mindset, proper equipment and sound tactics all working as one. 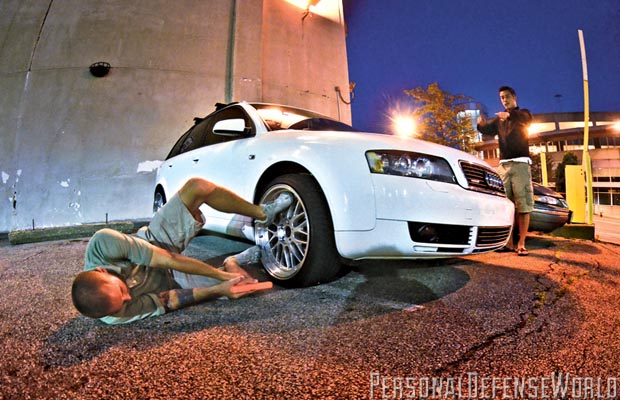 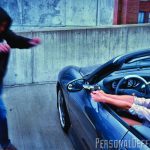 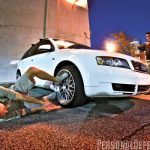 In the days of the Old West, shotgun messengers were armed with coach guns. The messenger, an employee of the stagecoach company, sat next to the driver armed with a side-by-side 10-gauge scattergun or other long gun to defend the coach and the strongbox it carried. This was known as “riding shotgun.” Assorted desperados of that era were violent opportunists looking to make a quick buck and, if need be, a quick killing to get it.

Flashing forward 150 years, horsepower may now mean something else entirely, but desperados still abound, and, contrary to our advances in civilization, these modern highwaymen far outnumber those of the Old West. Carjacking, road rage, kidnapping, armed robbery, rape, felonious assault, murder—take your pick or, better yet, take none of it and successfully thwart such attacks while traveling in the seat of your own modern motor coach.

How at risk are you while behind the wheel of your car? According to the 2004 U.S. Justice Department report Review of Shooting Incidents in the Department of Justice, 56 percent of shootings investigated by the DEA, FBI, ATF and U.S. Marshal’s Service involved vehicles. In that report “the DEA identified vehicles as a principal factor in shooting incidents.” We all use vehicles to get to and from work, and they’re routinely used by law-abiding merchants to conduct business.

Similarly, cars and trucks are used by criminals to conduct illicit operations—bad guys are on the roads. We may meet them by unknowingly entering a violent armed encounter between rivals. Or the criminals may force a meeting with us.

You may have put a lot of time and effort into preparing for an armed defense, but there is much more to vehicle defense than just carrying a concealed weapon. It takes planning and sound tactics to avoid armed confrontations while driving—it takes more to win those confrontations you can’t avoid.

Driving is so habitual that unless we witness screeching tires, loud horns, screams or crashes most of us zone out. As a new driver you were cognizant of all the elements of maneuvering the car, your speed, other vehicles and your distance from surrounding objects. After a few years this attention wanes—things become second nature, or you become complacent. We aren’t unaware but our attention is on other things—scientists call this “inattentional blindness,” and it is a very real and potentially dangerous phenomenon. You consciously pay attention to the things you’re focused on. In a benign example, you’re driving to the store, but you are not aware of the pedal under your foot or of the placement of your hands on the wheel. However, benign becomes dangerous when your inattentional blindness causes you to ignore the car that just blew the stop light and is now racing toward you as you enter the intersection.

Collisions with other vehicles and fixed objects can occur when we are not paying attention or when we’re focused on changing the radio channel, talking on our cell phone or texting while driving, which according to experts impairs driving more than driving drunk. Self defense while in a vehicle does not require paranoid levels of attention, but it does require better awareness of your surroundings and of potential hazards.

While driving maintain sufficient distance between you and the vehicle in front. Allow yourself enough space to make an emergency stop without impacting the other car. When stopped at signs or lights, allow sufficient room to maneuver away from the area—carjacking and robbery suspects often force contact by ramming into their targets’ vehicle. Also be aware of aggressive drivers, such as those who attempt to make you change lanes by tailgating your car, flashing their high beams, honking the horn or using obscene gestures. If one of these drivers is behind you, move over and let them pass. Avoid giving them a “brake test” or the one-finger salute. Who knows when an aggressive driver may resort to true road rage and ram your car or run you off the road?

Getting from point A to point B has become much easier with the advent of GPS devices. It is a breeze to plot a course: simply jump in the car and enter your destination address. The problem is that these computer-generated routes may take you through dangerous areas to save on travel time, when a slightly longer route would be safer. My wife is a healthcare professional who works several days a week and visits patients in their homes. When she proposed the idea of doing home healthcare, I was concerned for her personal safety. When she sees patients in the city where I work as a police officer, she uses safe routes of travel we we’ve worked out. The Secret Service calls this “advance work.” They scout locations prior to a presidential visit, map routes of travel, and so forth.

Anti-Lock Brake Systems (ABS) are a wonderful thing. ABS-equipped cars prevent brake lock-up and pulses the brakes to prevent uncontrolled skids. With conventional brakes you cannot steer when the brakes lock up, increasing your chance of losing control of the car during a skid.

Several years ago I had the opportunity to practice vehicle-ramming at a specialized, self-defense training center in North Carolina. As part of the defensive-driving program, we were instructed in ramming our way out of roadblocks. The technique involved lining up the frame of the vehicle’s driver’s side (I had a Cadillac) with the suspect’s rear tire. That way the driver’s car was not broadsiding the suspect’s but applying its maximum force of impact to the weakest point on the suspect’s car. Upon command and from a distance of about 30 feet, I hit the gas. The collision resulted in airbag deployment (myself and my passenger were uninjured) and in forcing the other vehicle out of my path. I continued to drive past the roadblock, albeit very slowly due to the cloud of airbag packing powder—similar to talcum powder—in the car and to the deflated airbag hanging from the steering wheel. Although my car was damaged, I was still capable of driving away at speed. Unfortunately, most of you will not get this training experience, but it can be done. Proper technique along with airbags can save you from serious injury in a self-defense scenario.

You can also use your vehicle against a criminal on foot who is presenting a deadly threat. Imagine you turn the corner in an urban area and are confronted by a violent mob armed with baseball bats and assorted clubs. As they surround your car and attempt to stop you, their intent is clear—serious violence. It would be asinine to stop the car, exit and fight a fiercely firioting crowd. Instead, use your car as a ram and power your way out of harm’s way. The windows may get shattered and the car’s body damaged, but that pales in comparison to what they could have done to you.

1 of 2
ROAD LEAD_phatchfinal
To defend yourself from inside a vehicle—moving or parked— you need awareness, mindset, proper equipment and sound tactics all working as one.

A licensed concealed-carry firearm of sufficient caliber should always be carried along with two reloads. Sufficient caliber in my opinion means 9mm and above. Although smaller calibers can offer you a smaller frame and more ease of carry, this is not the time for .38 revolvers or little pistols. True, most modern vehicles contain a lot of plastic, but laminated safety glass and sheet metal do not lend themselves to low velocity rounds. And if you were on a lowly stretch of highway or rural road, would you bet your life on five shots from that 2-inch barrel revolver? My recommendation, and one that I follow religiously, is a 16-shot 9mm semi-auto pistol with two mags for backup. Holsters are a mandatory item. Do not think that a pistol in a glove box is adequate protection. When suddenly confronted with a threat at the driver’s side window, you will not have time to reach across the car or under the seat. Holsters also prevent loss during a collision.

However, you are more likely to need a less-lethal option in a self-defense situation. For instance, I insist that my wife carry her C2 Taser when she travels for work—she carries pepper spray as well. In my personal vehicle I carry an expandable baton and pepper spray. Why not take advantage of these “remote controls” rather than use empty-hand techniques in a self-defense situation?

Routinely I and other firearm instructors also carry a “car gun.” In my case it is a 5.56mm Del-Ton carbine sporting an Aimpoint H-1 red-dot sight. Several instructors that I have learned from carry small carbines in cheap nondescript tennis racket cases. It may sound like overkill, but experience has taught us to not be naive.

There is a famous DEA training tape where instructors blast a vehicle with a 5.56mm rifle, shotguns, a 9mm sub-gun, a .38, a .357, a 9mm pistol and more. After placing targets in the backseat and in the front under the steering wheel, the front of the vehicle is shot. Tires and side windows are blown out, but the targets didn’t get hit with anything but some fragments. An instructor is able to start the vehicle and drive it away. This shows the problems in penetrating vehicles sufficient to stop a deadly threat. It also shows that vehicles, if used properly, can be efficient cover.

Something that CCW permit holders and firearms enthusiasts should all have readily available is a solid first-aid kit specifically designed for treating gunshot wounds. Leaps and bounds have been made in this category, and these items can be easily carried in a briefcase, backpack, glove box or trunk. Commercially available home first-aid kits are not designed to deal with gunshot wounds. Although beyond the scope of this article, minimum recommendations are a simple kit containing protective gloves, trauma dressings and a tourniquet. Many specialists in emergency medicine suggest hemostatic dressings such as Quick Clots and specialty bandages for dealing with a sucking chest wound. A little research and very little money could prevent you or your loved ones from bleeding out after a shooting.

Motor vehicles have done much to increase our comfort while traveling. They insulate and protect us from the outside world and quickly convey us to our destinations. But they cannot remove the dangers of our modern but often violent world. Vehicles offer portable cover and the ability to maneuver and evade violent confrontation, but they can lull us into a false sense of security and place us in and around dangerous people. Keep your mind sharp. By being aware, paying attention to our actions and environment and avoiding confrontation we do much to increase our safety. We also accomplish this by lawfully carrying a suitable handgun with sufficient ammunition along with other less-lethal self-defense tools. 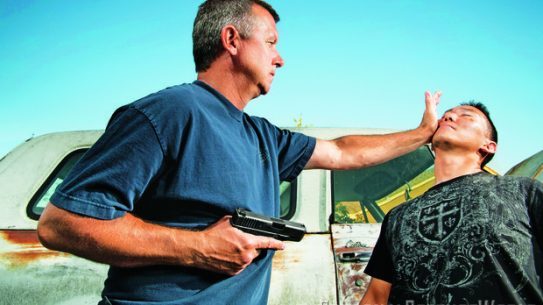 In the days of the Old West, shotgun messengers were armed with coach guns.…