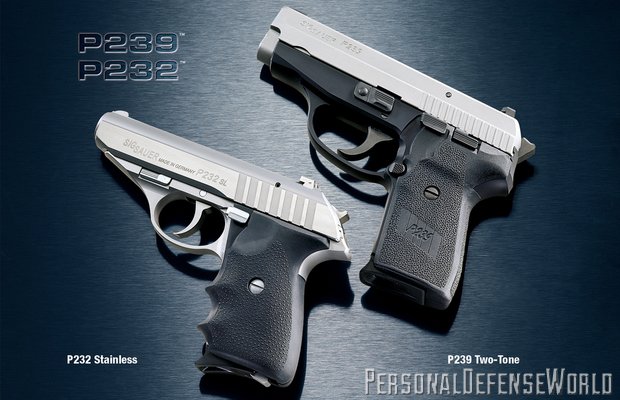 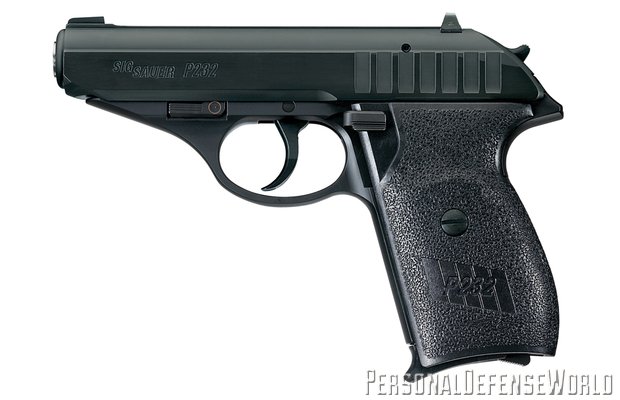 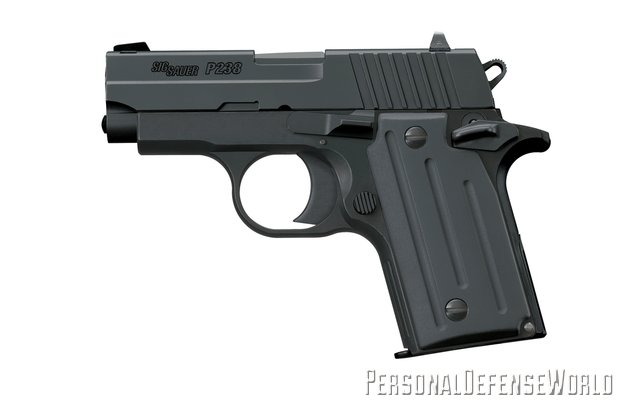 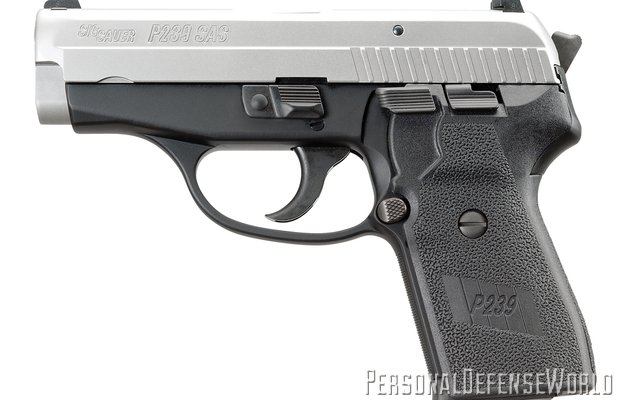 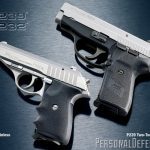 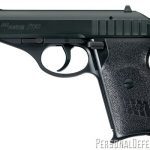 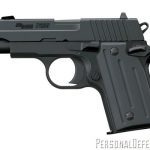 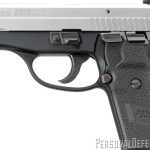 After four years working for a division of a major firearms manufacturer that has supplied the U.S. military with 9mm pistols for several years, I’m familiar with military and law enforcement sidearms. I frequently ask the opinions of law enforcement officers about the merits of various LE duty handguns, and the majority leans toward a Sig as the top of its class. That same reputation for quality and dependability carry forward into their line of small-framed pocket pistols, too.

It’s good to know that even in situations that call for a smaller pistol, such as a backup for concealed carry and personal protection, there’s a perfectly-sized Sig for the job. When size matters, a compact Sig P232 classic measures up.

Reminiscent of the Walther PPK, the P232 is a small, lightweight pistol chambered in .380 ACP. It features a fixed-barrel blowback action with a proven design that balances well. Its smooth contours and snag-free edges make it ideal for personal protection. It’s the pistol’s small size that makes it easy to carry concealed, whether in a discreet holster, purse or on the ankle, and yet the outstanding ergonomics of the grip design allow for comfortable shooting even in large hands.

The trigger comes from the factory with a 5.5-pound single-action pull and is capable of both single-action and double-action. Pulling back the slide sets the hammer backwards and downwards to its single-action position, making for a very short and crisp trigger pull with minimal take-up. The double-action pull is longer and more stiff, but still very smooth. It has no external safeties, though it does have a decocking lever positioned just above the right-handed shooter’s thumb, on the left side of the grip. The lever provides for a safe method of lowering the hammer from its full-cocked, single-action position, to a half-cocked, double-action safe position where the hammer itself falls forward to a locking point about an eighth of an inch from the rear of the firing pin. Once decocked, it is physically impossible for the hammer to drop completely and contact the firing pin. In order for the round to discharge, the full double-action pull would have to be completed, which allows for the pistol to be carried reasonably safely with a round chambered.

The P232 weighs less than 19 ounces empty, and its single-stack magazine gives the grip a trim profile, making it a pleasure to carry throughout the day. Its overall length is 6.6 inches. The trigger pull for a first double-action shot is a safety-conscious 10 pounds, while the single-action let-off is 4.4 pounds. The P232’s magazine capacity is 7 rounds, and one more in the chamber puts enough .380 ammo in your hand to address most situations.

Revealed in 2009, the P238 is a single-action pistol that hails back to the Colt Mustang pistol, with a classic Sig Sauer scalloped slide and finger relief under the triggerguard. Grip panels are fluted polymer, making this an all-metal-frame firearm in competition with plastic-framed pistols in the same class like the Ruger LCP and the Kel-Tec P-3AT.

Answering requests from shooters for a subcompact Sig pistol, engineers designed the new P238 as an attractive, small handgun built with the same accuracy and reliability as large-frame Sig pistols. The P238 comes in 15 versions, so it should be easy to find one to fit your tastes. One even comes fitted with a laser aiming device.

The P238 weighs less than 16 ounces. Its all-metal frame features an anodized alloy beavertail-style frame with fluted grips for comfort and a secure hold during rapid-fire usage. The stainless steel slide features popular Sig slide serrations and improves overall performance. Additionally, the SIGLITE night sights are removable and adjustable for windage. The P238 is shipped in a lockable hard case with one six-round magazine.

Six versions of the P239 were developed in response to demands from law enforcement and federal agents for a compact backup pistol ideal for off-duty concealed carry. Further refining the P239’s compatibility, three caliber choices give LE personnel the ability to feed this pistol the same ammo used in their duty sidearm.
Offered in 9mm, .40 S&W and .357 SIG, the slim profile of this single-stack pistol provides easy concealment without sacrificing handling. Its trigger pull in double-action mode is 10 pounds, with a lighter 4.4 pounds in single-action.

In years past, actions available were double-action-only (DAO) or double/single-action, (DA/SA). Sig released an altered version of the DAO pistols called the DAK (for Double Action Kellerman, after the designer of the system). When firing the pistol, the first trigger pull is 6.5 pounds, which compares to 10 pounds for the standard DAO. After the pistol fires and the trigger is released forward, the trigger has an intermediate reset point that is halfway to the trigger-at-rest position. The trigger pull from this intermediate reset point is 8.5 pounds. If the trigger is released all the way forward, this will engage the primary trigger reset and have a trigger pull of 6.5 pounds. To engage the intermediate reset, the trigger must be held to the rear while the slide is cycled, either manually or by the recoil of a round being fired.

A concealed carry version is offered called the Sig Anti-Snag or SAS. It has a dehorned stainless steel slide with custom Sig wooden grips and the DAK trigger system. The “Generation 2” of the SAS variant features a DA/SA SRT (Short Reset Trigger) and night sights, but with slimmer polymer grips.

P224
Sig Sauer introduced the P224 in early 2012. Based on the P229, the P224 takes the same hammer-fire reliability and lightweight all-metal frame and puts them in a subcompact package with all the familiar Sig controls and functions.

Despite its small size, the P224 maintains a double-stack magazine for a capacity of 12 rounds of 9mm and 11 rounds of .40 S&W or .357 SIG. Newer-model P229 magazines can also be used for an even greater round count.

Featuring a lightweight alloy frame, initial models are available chambered in .40 S&W with the DAK trigger. Traditional DA/SA triggers, 9mm and .357 SIG options will be available shortly. Full-size SIGLITE night sights allow the P224 to deliver pinpoint accuracy, which can be a challenge in most subcompacts. Sig has several P224s in the works that alter the finishes and grips, and the SAS (Sig Anti-Snag) model has a de-horned slide and frame for optimum concealed carry.

Also new for 2012, the Sig P938 offers the ballistic advantage of the 9mm cartridge in a platform similar in size to the P238. A single-action-only trigger, coupled with full-size SIGLITE night sights, makes the P938 handle like a much larger
pistol, yet it’s still easy to carry concealed.

The P938 packs 6+1 rounds of 9mm into an all-metal frame. The cocked-and-locked single-action trigger gives the P938 excellent accuracy in a pistol its size. Fans of the 1911 will find the thumb safety, magazine release and slide stop lever in familiar places. The P938 is available in five configurations: Rosewood, Blackwood, Extreme, SAS and Equinox—all different renditions that alter the grips and finishes.

The P290 subcompact 9mm is Sig’s newest polymer pistol. Designed to be the ultimate for concealed carry, this unique 9mm pistol is perfect for a small defense handgun that meets the demands of today’s law enforcement professionals as a backup duty gun. It easily doubles as a concealed carry gun. Users can customize their grips with removable grip plates made of aluminum, wood and polymer.

This lightweight subcompact weighs 24.9 ounces empty. Its barrel length is 3.6 inches. The double-action-only trigger breaks between 5.5 and 6.5 pounds. An optional integrated laser is available. The two-tone version features a black frame and stainless slide. It also can be engraved with your initials for a truly customized pistol.

No matter which of these pocket pistols you choose to fit your shooting needs, Sig Sauer has a wide enough selection of models and variants to fit the most discriminating of tastes. 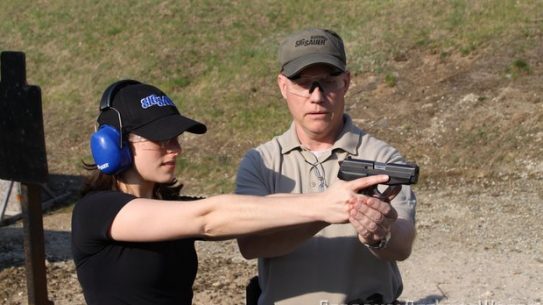