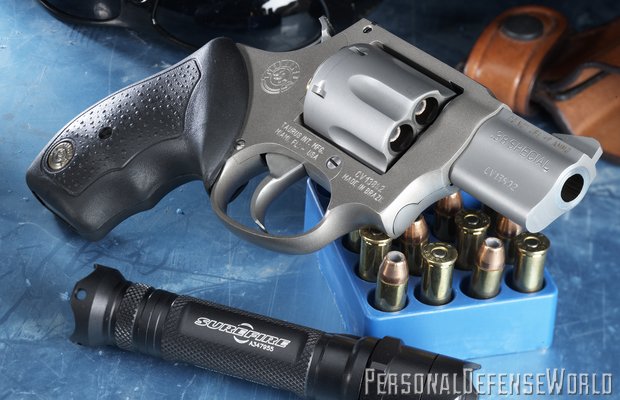 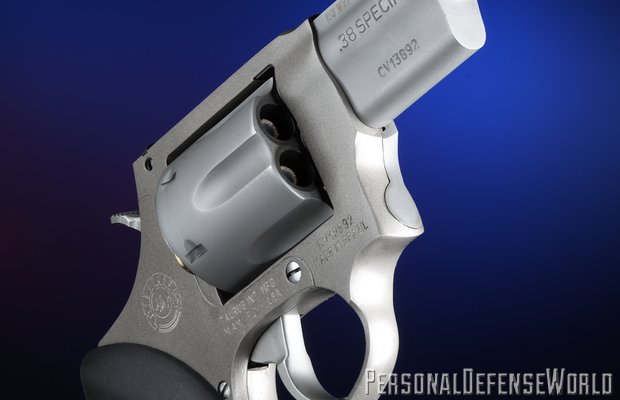 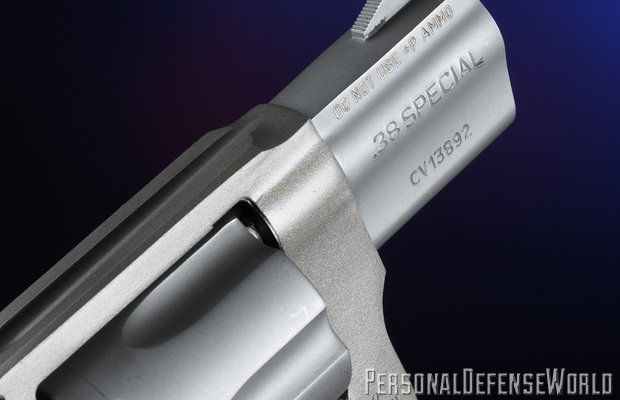 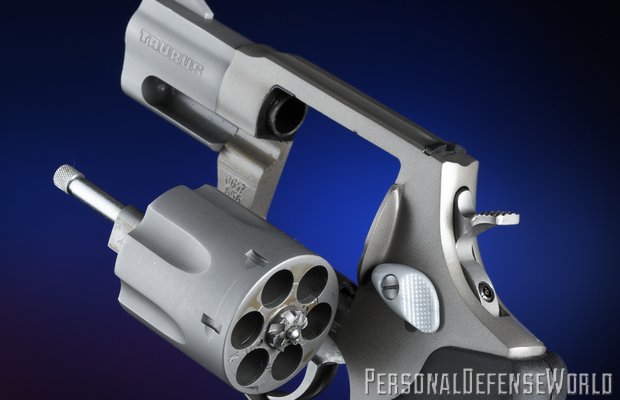 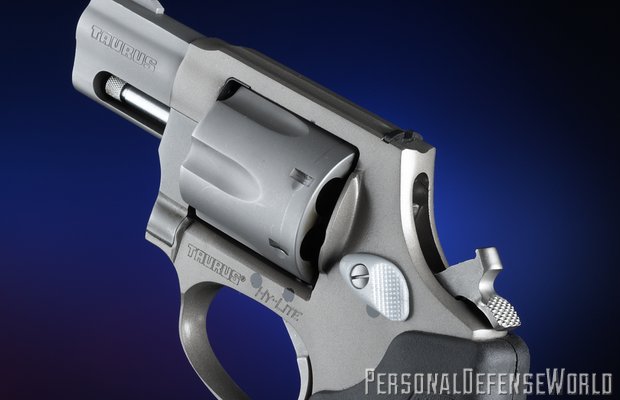 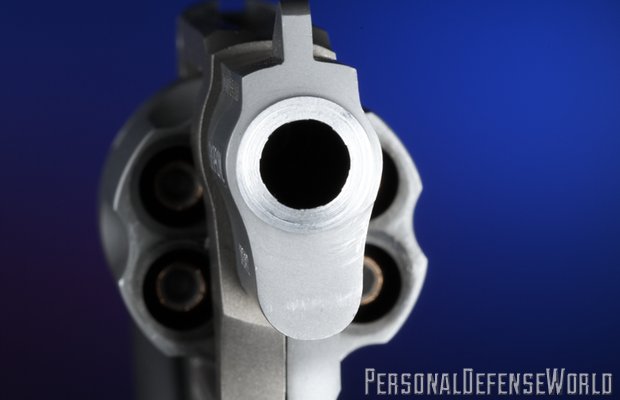 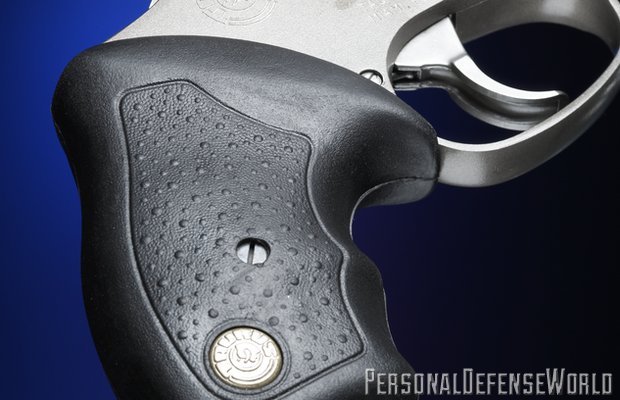 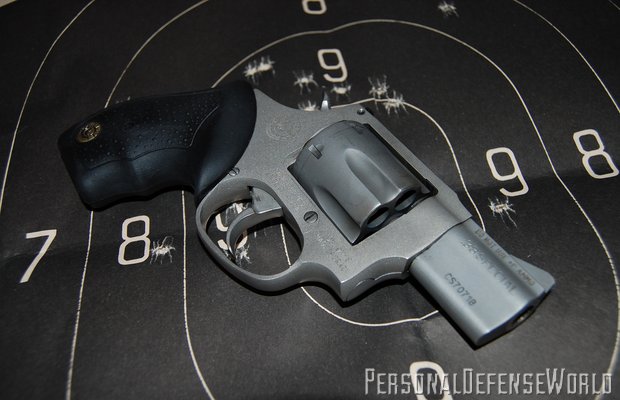 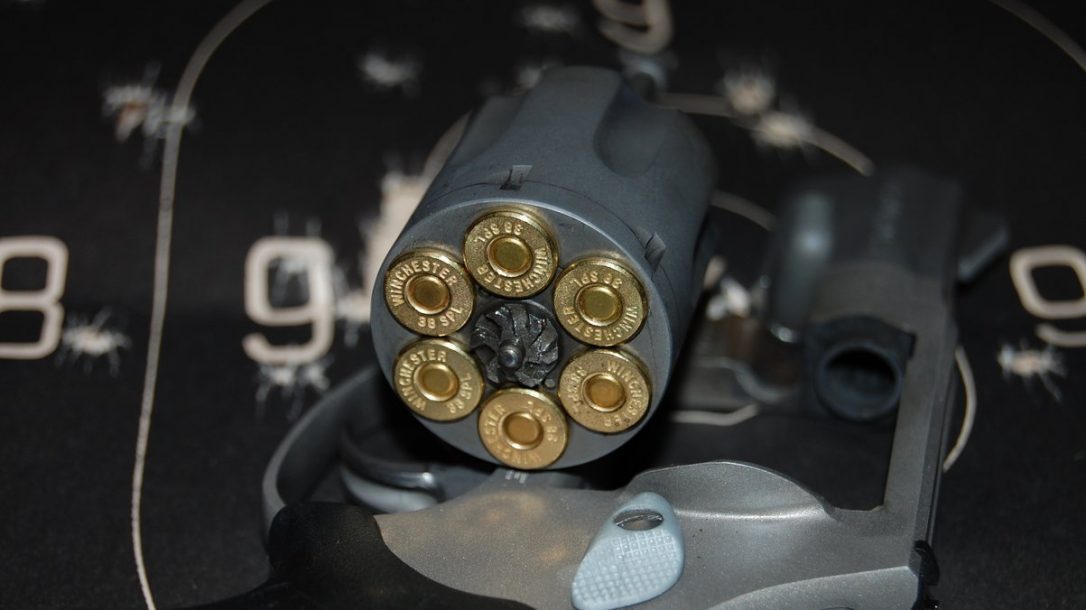 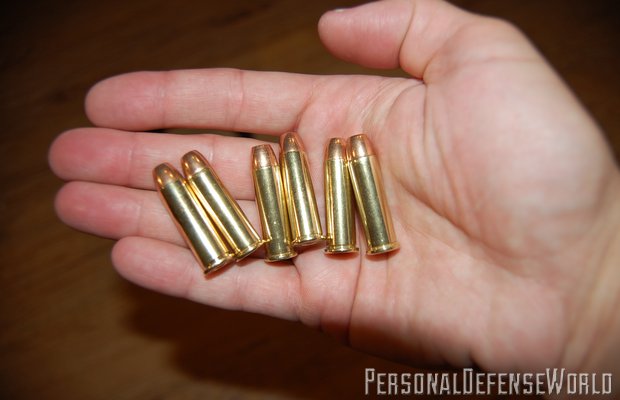 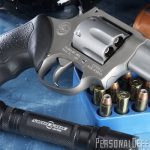 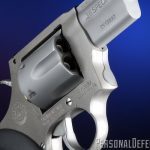 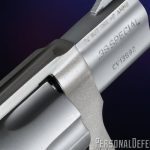 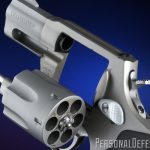 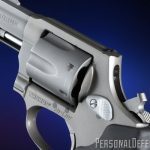 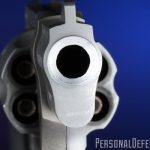 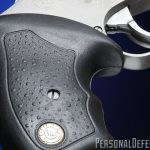 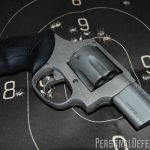 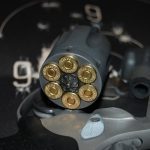 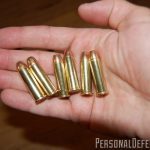 Carrying a handgun concealed requires finding the right balance between caliber, capacity, size, and weight. For some, nothing short of a full-size, all-steel 1911 in .45 ACP will do. For others, a .380 caliber, 6+1 pocket pistol meets their needs. A couple of catchy phrases capture the breadth of opinions on this matter: “Make mine a nine” (referring to 9mm ammunition and firearms) or “Five to stay alive” (referring to the popular five-shot Smith & Wesson J-frame revolvers). While the J-frame revolvers remain popular for concealed carry, Taurus offers a comparable alternative in its 856 Magnesium Hy-Lite — a lightweight, snub-nosed revolver that’s essentially the same size and weight of many of the J-frames, yet holds not five but six rounds of .38 Special. So if you’re keeping score, it’s literally “+1” for the Taurus. Bottom line: At $516, the Taurus 856 Magnesium offers a reasonable solution for someone looking for a lightweight, accurate carry gun.

This Taurus 856 Magnesium revolver arrived in custom cardboard packaging with an owner’s manual, warranty card, and a CD containing an electronic catalog of all Taurus firearms. Also included in the package were two keys, part of the Taurus Security System—a means of locking or disabling the gun. The revolver was gray in color and its metallic surface had a textured feel. The gun looked tough and durable. In addition, the fully shrouded ejector rod, 6-round cylinder, and rubber stocks made the Taurus look big and heavy. Thankfully, it wasn’t.

You could open and load the Taurus 856 Magnesium with your eyes shut because the cylinder release is in the same place as it is on most revolvers. If you shoot right-handed, push the cylinder release toward the cylinder with your right thumb then use the fingers on your left hand to push the cylinder out to the left. The six-round cylinder is noticeably larger than a five-round cylinder. Unfired cartridges drop in with ease. Pushing the cylinder back into firing position yields a positive click from a detent on the top of cylinder arm engaging with the frame. All of these parts align well and while there is minimal play, nothing feels even remotely sloppy.

Unlike J-frames that can handle higher-pressure .38 Special +P or .357 Mag rounds, the Taurus 856 Magnesium calls for standard .38 Special rounds. As a reminder, the right side of the barrel is marked “DO NOT USE +P AMMO” and, just below that, “.38 SPECIAL.” The owner’s manual—a standard Taurus revolver manual—also includes stickers that warn against the use of anything greater than standard .38 Special ammunition.

If you want to secure the Taurus (unloaded), the Taurus Security System—engaged via a lock located on the hammer—allows you to disable the revolver’s functioning with the turn of a key. The owner’s manual advises that you “never” enable the lock while the gun is loaded.

With a frame made from magnesium — a light, corrosion-resistant metal used in many other manufacturing applications and similar to but less dense than aluminum — the 856 hails from Taurus’ “Small Frame” line of small revolvers and boasts a frame weight of only 13.2 ounces.

I put it into an Uncle Mike’s #3 pocket holster and put it in my right front pants pocket. Although slightly larger width than a J-frame — the Taurus is 6.75 inches in length — it fit the Uncle Mike’s holster and fit in my pocket. The Taurus’ six-round cylinder did, however, create a bit more of a bulge and, because the rubber stocks (actually it’s a one-piece rubber stock) cover the gun’s backstrap, it seemed both larger and longer in my pocket than a J-frame.

Drawing a snub-nosed revolver from a pocket holster, like any firearm, requires practice. Since the distance from the front strap of the Taurus’ “pebblestone” textured rubber stocks to the backstrap of the stocks is longer than J-frames equipped with the popular Uncle Mike’s boot grip, there’s more to get your hands around for the draw. When you do get your hand around the stocks, they are firm and comfortable, offering excellent purchase. Because these are shorter stocks meant to aid in concealment, your pinky finger will have no place to go. Just tuck it under the butt.

The Taurus’ traditional hammer is wide, textured with a diamond pattern, making it easy to engage and pull back. Designed as it is, it could snag on the inside of a pocket during a draw. As such, you can put your thumb on or behind the hammer to ensure a snag-free draw while practicing a smooth motion to help the hammer clear any potential snag areas of your pocket.

Taurus provides a large, gray serrated ramp for a front sight and an adjustable, black notch blade sight in the rear. Combined they provide a sight picture that’s a substantial improvement over the front ramp and rear groove the comprises most snub-nosed revolver sights. Further, the contrasting colors of the front and back sights greatly enhanced sight acquisition. The rear sight adjusts for windage, a nice feature even on a 2-inch barreled revolvers that are not known for their accuracy. With an adjustable rear sight, no groove sight is milled into the frame, which contributes to overall frame strength.

The Taurus offered a long, heavy, double-action trigger stroke — a reassuring feature for a defensive revolver with no external safety. You could fire this gun in single-action mode but I stuck with double-action for the duration of the test. The trigger action started out smooth but got progressively rougher after firing only 12 rounds. This slightly detracted from its overall accuracy and seemed to require just a bit more strength to fire subsequent rounds. In fact, as my range time progressed, the accuracy worsened slightly. Unloading and wiping the gun down offered some relief; a full cleaning cleared up the roughness significantly.

Many revolver firing mechanisms make it possible for a shooter to “stack” a trigger, meaning the shooter squeezes the trigger enough to draw the hammer back, but not far enough to break and fire. In that position, a shooter then holds the trigger back while making last-minute aiming adjustments and then completes the trigger squeeze, effectively firing a single-action shot. In some cases this improves accuracy. Most firearm manufacturers and defensive shooting experts do not recommend stacking a trigger when shooting — rather, assuming all other rules of gun safety are being followed, they recommend simply squeezing the trigger in double-action mode: engaging the long trigger pull without stopping. Like most revolvers, the Taurus 856 Magnesium’s trigger could stack, but not easily. As such, stacking it provided no advantage whatsoever in terms of accuracy.

Fired from a bench rest in double-action mode, the Taurus produced consistent groups and at 15 yards hit a few inches high and left from point-of-aim. I compensated by aiming a few inches right and low and the rounds struck the paper targets accordingly. The aforementioned roughness of the trigger stroke —resulting in greater barrel movement during firing—contributed to a flyer every now and then.

Firing standard .38 Special loads from a lightweight revolver of course resulted in recoil, but nothing worse than what might be termed as “snappy.” I credit the Taurus’ excellent rubber stocks as the key factor in taming the recoil.

With its excellent stocks and sights, accurate follow up shots were the rule, not the exception. With a little practice, an “average” shooter should not have any trouble putting six shots on a 7- to 10-yard target in under 10 seconds.

Cleaning the Taurus 856 Magnesium followed standard protocol for cleaning a revolver and offered a chance for a close-up inspection. In addition to having some sharp edges, some parts of the Taurus surprised me. For example, at the muzzle, the gun had a sharp edge around the barrel shroud, enough to regularly gather lint or fibers from a pocket holster. Further, at the point where the barrel shroud met the frame, the gun had a slight gap that revealed some unfinished edges. This was also true of where the cylinder arm engaged the frame near the detent. In addition, the cylinder release was silver in color and felt like it was made of a material different from the frame. Regardless of the part’s composition, it simply looked out of place on the dark gray magnesium frame.

These were minor gripes, to be sure, but noteworthy in terms of evaluating fit and finish. Because the Taurus has a magnesium frame, Taurus engineers installed a heat shield at the barrel’s forcing cone. As with all revolvers, hot gases escape here when firing. As such this heat shield protects the magnesium frame and should extend the life of the gun.

The Taurus 856 Magnesium’s weight, capacity, and requirement to fire only standard .38 Special rounds makes it well-suited to the person who is looking for a basic, everyday carry gun that can put fired rounds to point-of-aim at a distance that would be considered a typical self-defense range. Its light weight and six-round capacity give it “+1” over a five-shot J-frame, but the six-round cylinder also makes it slightly more difficult to conceal. A few flaws in fit and finish and a trigger pull that may smooth out over time might cause angst among some potential buyers. Still, this Taurus may coin a new catchy phrase: “My six-gun is five plus one.” 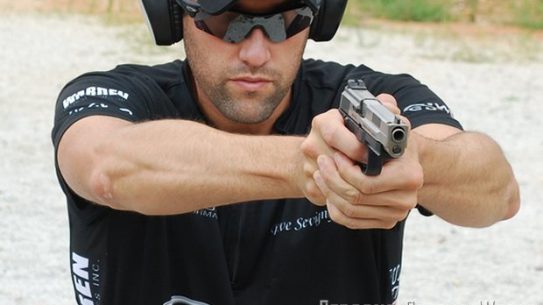 Faster Aiming From a Pro 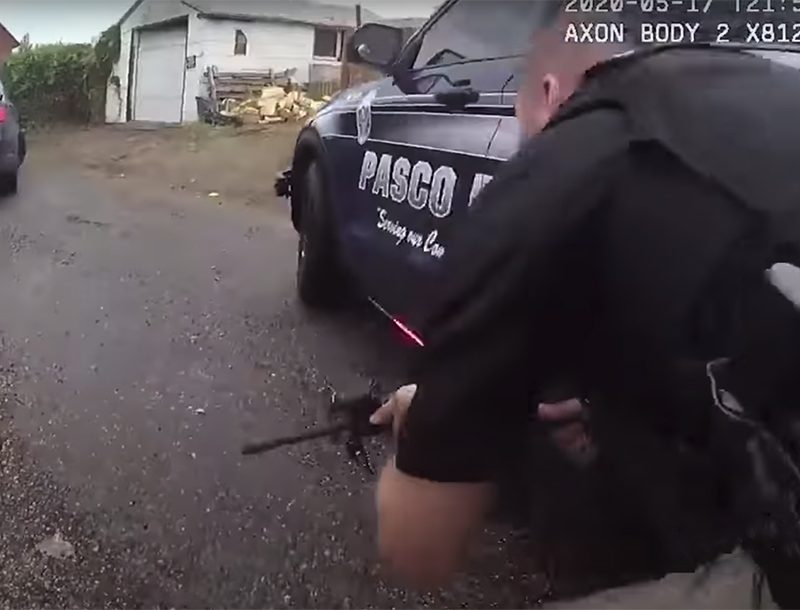