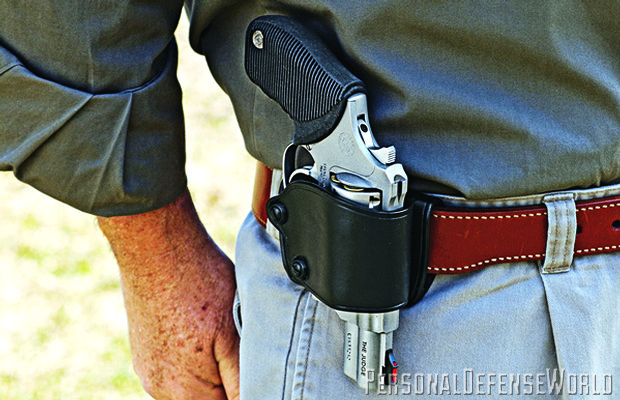 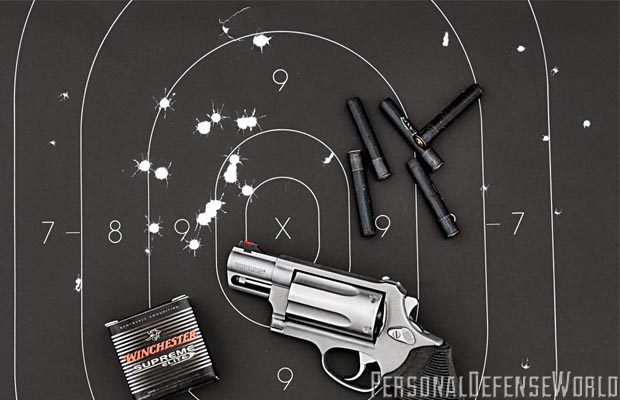 2 of 3
PHD Taurus Public Defend b
Fired from a distance of 21 feet, five Winchester PDX1 shells, bearing a total of 15 Defense Disc projectiles and 60 plated BB shot, placed all 15 projectiles within the 9 and 10 ring central body mass of a B-27 silhouette target and spread BB shot over the entire torso area. 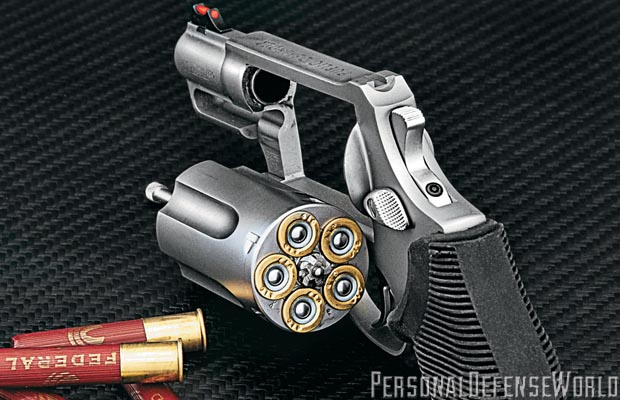 3 of 3
PHD Taurus Public Defend
A pistol that can dispense five rounds of .410 ga. 000 buckshot and maintain a tight pattern at up to 7-yards makes one heck of a deterrent to anyone on the receiving end. 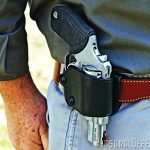 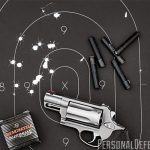 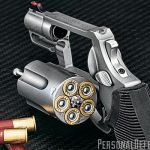 This is the moment of truth. Your home has been broken into by one or more individuals. You have called 911 and taken shelter in your bedroom. For the next eight minutes you and your family are on your own. Eight minutes is the national average police response time to a 911 call. It can be a long as 11-minutes and 11-seconds, as short as 6-minutes and 50-seconds.[1] If you live in a rural area, the response time is probably going to be a lot longer. Now lock yourself in the bedroom, watch the clock and wait eight minutes. It’s a long time.

The idea of using a shotgun for home defense is as old as the double barrel hammer guns of the 19th century. During the 20th century, and most certainly over the last decade, there have been mixed opinions about shotguns for home defense, mostly because in the confines of a home invasion, a shotgun or rifle barrel is easy for an assailant to grab hold of in close quarters. The jury is still out on that analysis, but the Taurus Judge line of .410 shot shell revolvers has handed down one verdict that no one can dispute: A pistol that can dispense five rounds of .410 ga. 000 buckshot and maintain a tight pattern at up to 7-yards (a far greater distance than most in-home confrontations with a criminal) makes one heck of a deterrent to anyone on the receiving end.

Ruling on The Judge PD

Unlike its medium-sized frame predecessors, the Judge Public Defender is based on the smaller .38 Special +P Taurus Model 85 frame. It’s not a small gun, but its short 2-inch barrel, and elongated cylinder and frame only add 7/8ths of an inch to the gun’s overall length compared to a 2-inch Model 85 Ultra-Lite, which measures 6.5 inches. The PD measures 7.5 inches in overall length (2-9/16th inches of which is cylinder length). With a short sight radius (actually longer than most snub nose revolvers because of the elongated cylinder and frame) the Public Defender is fitted with a bright red fiber optic front sight that is easy to see even in lower light conditions. The 5-shot revolver has a fairly heavy trigger pull that measures slightly less than 12 pounds, which is actually an advantage in a gun of this design. The heavy trigger pull causes your grip to tighten up (the recoil is substantial with defensive loads) but once you get a feel for it, the trigger doesn’t seem that heavy. The PD can also be fired single action (cocking the hammer) which decreases trigger pull to 5 lbs. 4.5 oz. average, however, the PD’s bobbed, serrated hammer is hard to cock. It was designed to reduce the chance of snagging on clothing if the gun is carried in a pocket holster, jacket pocket or inside a fanny pack.

Defensive Ammo and the PD

“The thing you have to remember,” explains Taurus International Executive Vice President Bob Morrison, “is that the pellet doesn’t know if it is spraying from a shotgun barrel or a pistol, it is coming at you at about 950 feet per second, and with new 2-1/2 inch .410 ga. 000 loads firing up to four pellets of approximately .36 caliber (.350) diameter the results at close range are devastating.”

Indeed, our field test proved Morrison’s point. We used two new rounds that were developed with the Taurus Judge in mind, and the Public Defender in particular, as it is limited to 2-1/2 inch shells. The first test was with Winchester’s new Supreme Elite PDX1 .410 loads, which are designed to provide unprecedented stopping power. According to Winchester, the PDX1 is “…effective in both shotguns and 410 compatible handguns. [The] PDX1 in .410 gauge features a distinctive black hull and black oxide high-base head and combines three plated Defense Disc projectiles and 12 pellets of plated BB shot.

2 of 3
PHD Taurus Public Defend b
Fired from a distance of 21 feet, five Winchester PDX1 shells, bearing a total of 15 Defense Disc projectiles and 60 plated BB shot, placed all 15 projectiles within the 9 and 10 ring central body mass of a B-27 silhouette target and spread BB shot over the entire torso area.

3 of 3
PHD Taurus Public Defend
A pistol that can dispense five rounds of .410 ga. 000 buckshot and maintain a tight pattern at up to 7-yards makes one heck of a deterrent to anyone on the receiving end.

The result is the ideal personal protection load for short range engagement with the performance needed to stop threats. Designed for use in the Taurus Judge, this new personal defense round provides maximum protection at close range.” At a distance of 21 feet (7-yards) the Taurus PD loaded with five Winchester Supreme Elite PDX1 shot shells delivered Morrison’s “devastating” results. Five shells, a total of 15 Defense Disc projectiles and 60 plated BB shot, placed all 15 projectiles within the 9 and 10 ring central body mass of a B-27 silhouette target. All of the projectiles but six landed in groups of two or three, with average measurements less than one inch center to center. The plated BB shot spread over the entire torso of the target hitting arms, shoulders, neck and abdomen.

The effectiveness of the multiple hits from even a single PDX1 or Federal Premium’s 2-1/2 inch 000 Personal Defense shell, explains Morrison, “is the immobilizing effect simultaneous hits can have. The cumulative effect of being hit with four 000 pellets or a three projectiles is far more dynamic than even a double tap from a .38 revolver. It is the multiple impacts, the quick second follow up shot, that make a double tap so effective, so when you double that, it is far more immobilizing.” We had similar, though somewhat more dynamic results with the Federal Premium 2-1/2 inch 000 Personal Defense load which contains four 000 pellets rather than the usual three found in most .410 ga. 000 buckshot. This equates to a 25% increase in first shot effectiveness, particularly the way Federal Premium buckshot groups when fired from the Taurus Pubic Defender’s 2-inch rifled barrel. Shots grouped in pairs, usually within 1-inch of each other. The greatest concentration of 000 buckshot from five rounds, a total of 20 pellets of approximately .36 caliber each, struck within the X ring of the central body mass, with all but two of the remaining pellets striking within the 9 ring. The silhouette targets speak for themselves.

Considering all the attributes this relatively compact 5-shot revolver brings to the table, it may well be the best compromise between a handgun and a shotgun ever designed. Some will argue that a “compromise” is an agreement where neither side is completely satisfied. All things considered, we’d prefer to be on the side of the Taurus Judge Public Defender that has the trigger.

FYI: A One-Two Punch is a combination of two blows delivered in rapid succession in boxing, especially a left lead followed by a right cross, it also defines an especially forceful or effective combination or sequence of two things.
[1] Based on recent city by city average response times to 911 calls for police. Contact: Taurus International 305-624-1115, taurususa.com 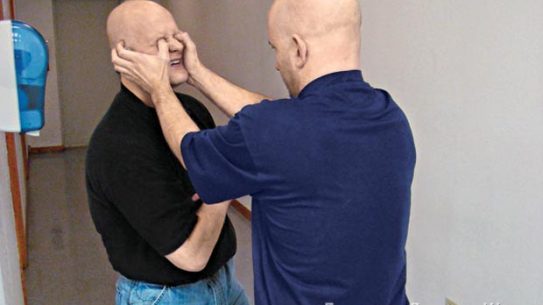 This is the moment of truth. Your home has been broken into by one…