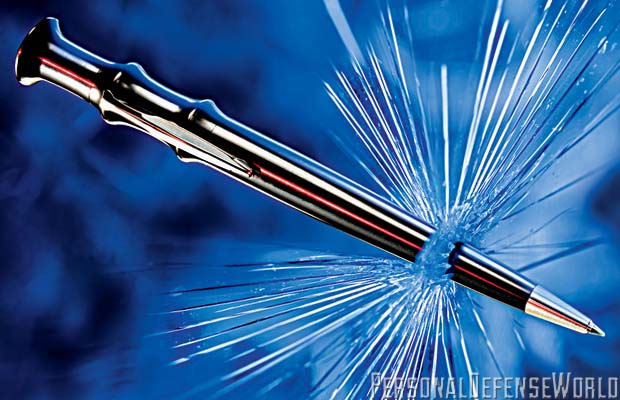 1 of 2
PDWTacticalPens2
The strength of the Kunai is not compromised if you pierce or shatter a car window. The Kunai Tactical Pen is constructed of the highest quality materials. The Kunai sports a thumb rest and a unique bamboo finger grooves that allows for an ergonomic “ice pick” grip and aids in an effortless tactical grip. In an emergency, use the Kunai embedded with a hard steel window breaking tool designed to strike and shatter glass. 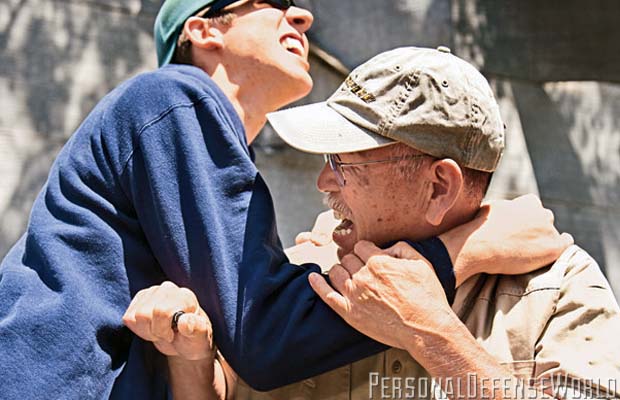 2 of 2
PDWTacticalPens
Fighting back armed only with a pen should be considered as a last resort only if your life is in danger. Break the hold by striking any predator with a hard thrust to the ribs. 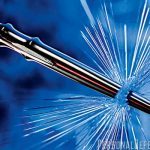 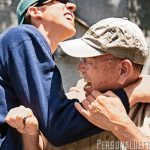 The pen doubling as a weapon is not new concept. Makeshift stabbing instruments have been around since the first penal institutions were formed and the first prisoners were incarcerated in the post quill and ink era. In the dark underworld of law enforcement and corrections, authorities falling into the trap of, “it’s just a pen,” has led to countless stabbings and “shankings,” as pens and pencils make excellent improvised expedient weapons. Some correctional facilities teach their staff to keep the pen clipped under the flap of their shirt pocket and not on top, as guards have been stabbed by inmates using the officer’s own pen. There are also numerous stories of inmates stabbing corrections officers with self-made instruments concealed from authorities, thus allowing the inmate to get a hold of a firearm and shooting other deputies, guards, or corrections officers in holding cells.

There various “tactical” type pens out there, to include a pen gun, pen knife and even a pepper spray pen. All look like ordinary writing instruments–very compact and easy to carry in a pocket or purse. It will certainly catch a criminal off guard when the cap is pulled off, and the other end exposes a barrel, a blade, or pepper spray. The disadvantages, however, is the pen gun is generally a single shot, small caliber, and more than likely in violation of local, state and Federal firearms laws. Remove the cap from the Pepper Shot Pepper Spray Pen to repel attackers; provided you are within 6 feet and not downwind. Also, the bad guys have to be sprayed properly and in the proper targets areas.

Today, a writing instrument serving as a tactical tool has become very important with assaults, especially on women and police officers, continually on the rise. In the hands of a determined police officer fighting for his life, a tactical pen can be just as effective as a knife. In most cases, an officer’s ability to get to a pen and deliver a good strike the suspect’s eye, face, throat, or neck should cause the suspect to release his grip on the officer’s firearm. The ballpoints dubbed the “tactical pen” are now a “must have” accessory for law enforcement, military personnel, and security contractors. In light of September 11th, they are very popular because TSA and the commercial airlines industry do not (yet) prohibit passengers from carrying writing instruments on airplanes. Women are also encouraged to consider a tactical pen as part of their self-defense training. It makes great gift idea, and various companies such Surefire, Tuff Writer, Benchmade, Spyderco, Mil-Tac, Cold Steel, Smith & Wesson, Schrade, Timberline, Wilson Combat, even famed knife maker Rick Hinderer are all producing their version of a tactical pen.

One of the new cooler tactical pens on the market, available from Tuff Products, is fittingly called the “Kunai.” From the folklore of the Ninja, the Kunai was a Japanese knife from the Ninja’s arsenal that was used for throwing, stabbing, and for hand-to-hand combat. The modern day Kunai pen has a thumb rest and unique bamboo finger grooves that allow for an ergonomic “ice pick” grip. It is smooth, elegant and constructed of an aerospace-grade aluminum body that’s perfectly balanced for writing, while the thumb rest can also break glass in an emergency. The Kunai is specially designed for close quarters self-defense and combat situations, and is solid enough to jab through almost any part of the human body.

1 of 2
PDWTacticalPens2
The strength of the Kunai is not compromised if you pierce or shatter a car window. The Kunai Tactical Pen is constructed of the highest quality materials. The Kunai sports a thumb rest and a unique bamboo finger grooves that allows for an ergonomic “ice pick” grip and aids in an effortless tactical grip. In an emergency, use the Kunai embedded with a hard steel window breaking tool designed to strike and shatter glass.

2 of 2
PDWTacticalPens
Fighting back armed only with a pen should be considered as a last resort only if your life is in danger. Break the hold by striking any predator with a hard thrust to the ribs.

Almost everyone agrees that firearms are generally best for self-defense, but obviously not everybody can carry one in every situation. The Kunai is something that the average civilian can own and carry. It is unnoticed in a shirt or jacket pocket, and easily carried and used in anywhere without raising eyebrows or causing any suspicion. It is one of the few common, everyday items that may allow an average citizen to be prepared for some threats.

Nonchalantly move it from a pocket and carry it comfortably in the hand. It can already be in the hand when going to and from the car, home, or work. In the event of an attack, the tactical pen is immediately available and ready to go. The bad guy won’t recognize a weapon like the Kunai, as it is easily concealed and has the appearance of a harmless writing tool. But it quickly transforms into an efficient weapon, especially when used to attack vulnerable parts of the body. A good pen strike in a vital area is more likely to incapacitate a criminal than an empty-handed strike. The use of the Kunai will intensify the destructiveness of a response to an attack, arguably increasing your potential of escaping death or serious injury.

Do not make the mistake of being lulled into a false sense of confidence. The tactical pen is not the mystical “Kunai” from the Ninja’s arsenal or a magic bullet. There is more to it than just buying a $100+ defense pen and carrying it around expecting it to prevent a violent attack. The pen should just be one more item in the “self-defense tool box.” A basic, self-defense response should be learned and practiced when adopting the Kunai or similar device. Learn from a competent self-defense martial arts instructor and develop other skills and response options to complement the pen tactics. The pen will most certainly help, but develop other components of self-defense that will have a greater affect on the ability to stay safe and increase survival odds.

Any good writer will tell you the importance of carrying a back up pen–which is even more important if it’s being used for self-defense. Consider the worst case scenario of being disarmed by the attacker during the actual use of a tactical pen in a self-defense situation. Another possibility is dropping or losing it during the struggle. Everything must be done to prevent it from falling into the hands of the attacker, in order to prevent the pen from being used on the owner in the same fashion the owner intended to use the pen on the predator. The benefit of having a tactical pen (or two) still outweighs the possibility of losing it.

The ability to think is the primary tool for survival. For example, never bring a tactical pen to a gun fight. When trouble or danger can’t be avoided, it must be dealt with effectively. The tactical pen is not for deterrence, it is the last line of defense. Fighting back armed only with a pen should be considered a last resort. With some rudimentary training coupled with surprise, speed, aggressiveness, it is designed to get the user, who is about to become a victim, out of a worst-case scenario. The objective is to break free and get away from an attacking predator.

Some knowledge of anatomy is also helpful to make the tactical pen techniques more effective. But avoid the confusion of trying to remember specific strikes for specific targets. Make any technique work from any position you may find yourself in. The strikes don’t have to be perfect and there are no wrong movements. When a predator has managed to lay his paws onto a person, break the hold by striking, pressing or poking the pen into whatever target presents itself. There are many worthy targets–a hard, well-placed strike to a bony area can easily break bones and inflict enough pain to prompt a bad guy to stop his attack. Conduct follow-up strikes with a hard thrust to the face, trachea, sternum, or ribs–all moves that are certain to devastate an attacker. When caught in a headlock, ram the tip into whatever part of the attacker’s anatomy you can reach. Strike! Strike!

The Kunai is not intended to aim for nerve points and/or to try and get leverage. It is to stab an attacker with their pen! There will be no fancy moves such as wristlocks, takedowns, and other elaborate techniques that don’t work in close quarters, hand-to-hand, real-world confrontations. Attack any vulnerable parts of the opponent’s body. Stick and move! Hit and run! Using a simple pen, you can turn it into an improvised weapon as a tool for escape… to live and fight (or write) another day. 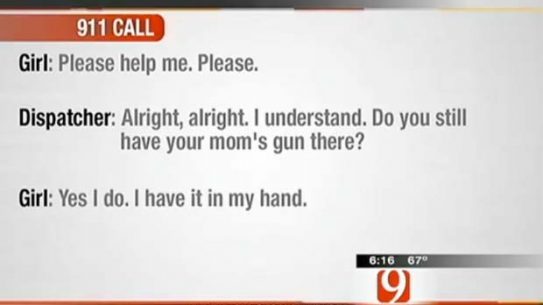 The pen doubling as a weapon is not new concept. Makeshift stabbing instruments have…