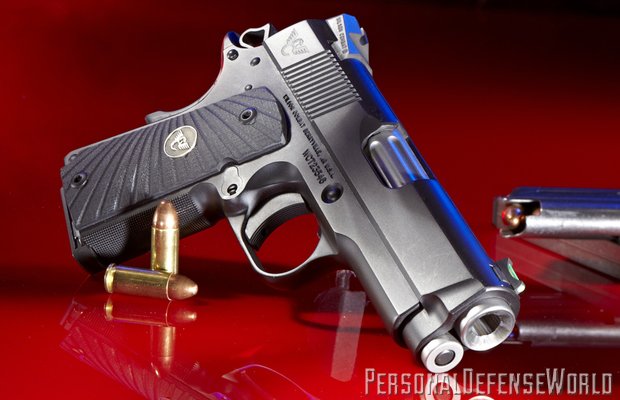 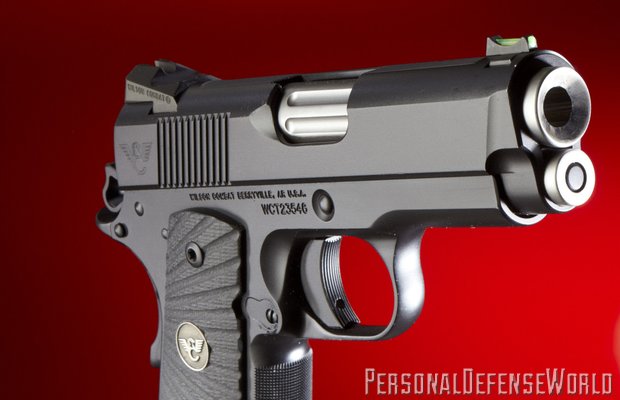 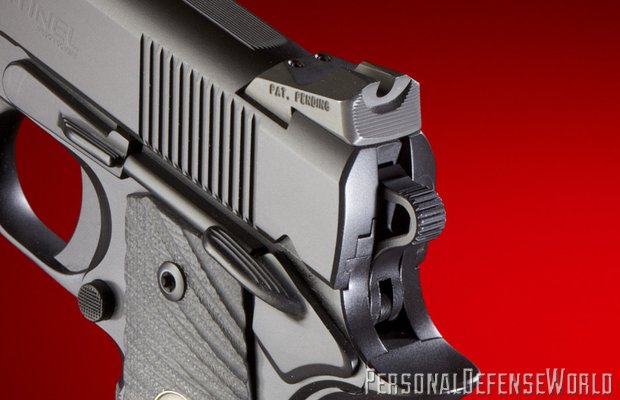 3 of 7
CH_Wilson_Sentinel_Two pager 4795_phatchfinal
A set of Wilson’s Battlesights makes this 1911 easy to get on target quickly. The black rear and fiber optic front sights contrast nicely. In order to ensure years of reliable operation this pistol uses only the finest Wilson Combat parts, such as the Match grade hammer. 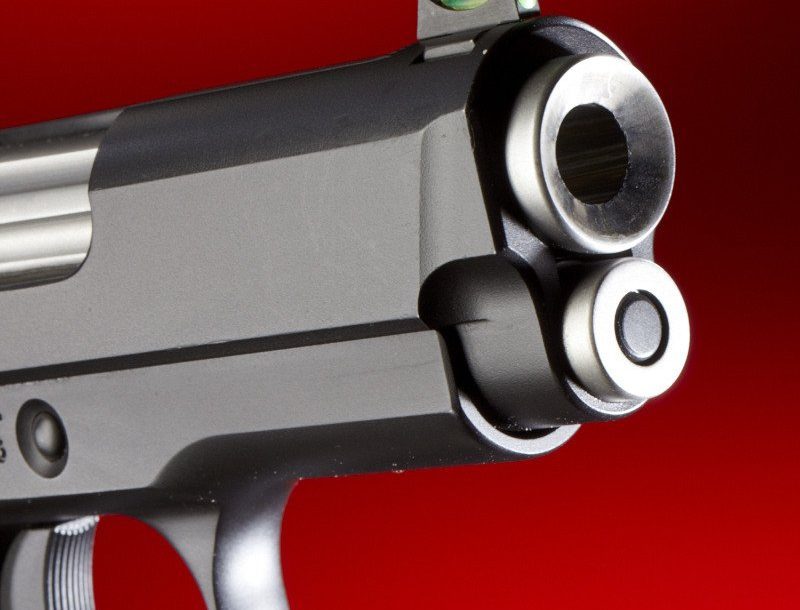 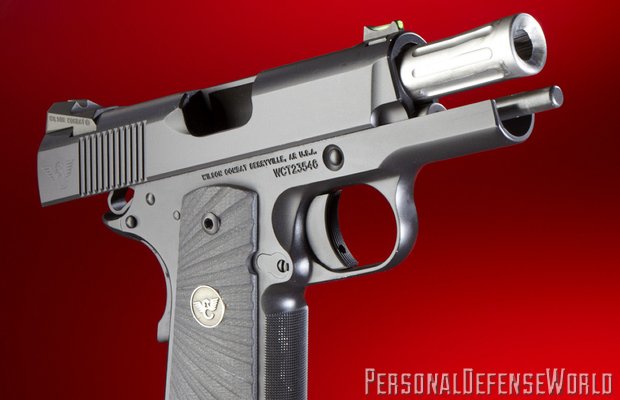 5 of 7
CH_Wilson_Sentinel_Two pager 4800_phatchfinal
Fluting the barrel removes some weight and provides an avenue for excess dirt and debris for reliable operation of the pistol. 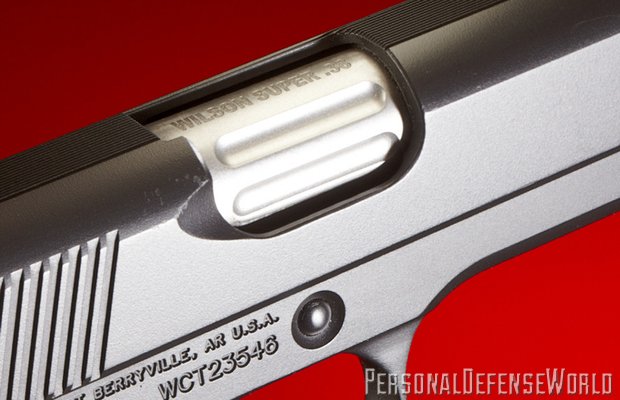 6 of 7
CH_Wilson_Sentinel_Two pager 4794_phatchfinal
Fluting the chamber to match the barrel sheds some weight and makes for smoother operation in dirty conditions. 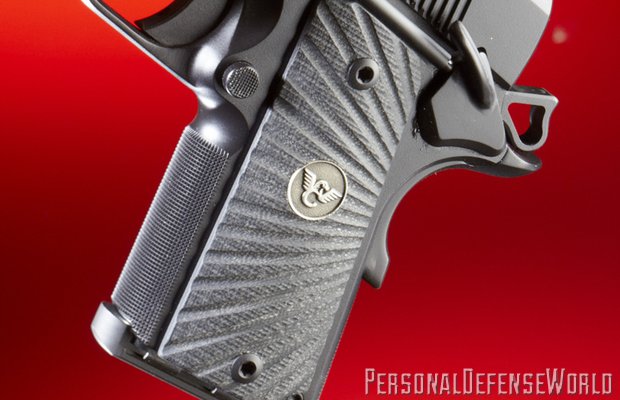 7 of 7
CH_Wilson_Sentinel_Two pager 4801_phatchfinal
Checkering at 30-lines-per-inch is added to the high-cut frontstrap providing for control in most weather conditions. 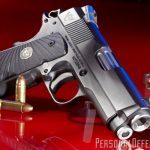 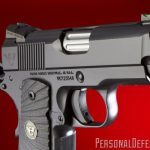 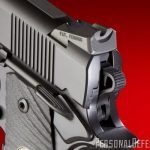 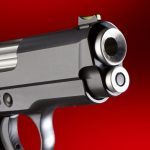 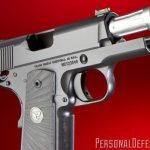 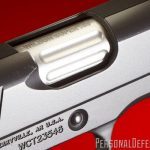 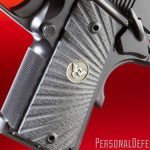 Concealed carry holders are constantly looking for smaller pistols facilitating ease of carry. Having carried a pistol for decades it isnâ€™t nearly as easy as it looks. It takes a commitment and forethought. For most of my time there was always a compromise between size, reliability, and combat effectiveness. Small pistols are great to carry but can be ineffective when the bullets start flying. Many remain unprepared to bet their lives on calibers smaller than the 9mm.

As they shrink in size reliability can be an issue. There is little doubt this area has seen marked improvement, but the laws of physics remain. Some small pistols can be harder to shoot. Depending on the platform they can be picky about carry ammunition and more susceptible to limp wristing. Given the possible need for one handed shooting, or from less than pristine positions, this can be a real issue. Many of the modern polymer based pistols have done a pretty good job with this, but for the dedicated 1911 user this has been a bit more problematic.

This subject always brings forth some controversy. Irrespective of your experience with a particular pistol, the platform is harder to function correctly as the barrel gets shorter. Conversations with most every master 1911 pistol smith in the last 30 years confirms this. It can be kind of hit and miss. Over the years several small 1911 pistols have crossed my path. As the barrel gets shorter than 4 inches it gets spotty. There have certainly been a few that worked great, others not so much. It is true of every 1911, especially those in .45 ACP. Many work pretty well for the first thousand rounds or so only to start having reliability issues. They require a closer and more frequent check on springs, extractors, and magazines. Its not that they wonâ€™t work, it is just more problematic.

One of the more common solutions these days is the use of smaller calibers. One of the more popular calibers has been the 9mm. Several manufacturers chamber their sub-3-inch 1911 pistols in this caliber. It requires some scaling down, but it has proven to be an excellent caliber for this platform. Some have tried the .40 S&W with varying success.
One of the latest to enter this arena, and one with great promise is the Wilson Combat Super Sentinel. Chambered in .38 Super it brings full bore 9mm velocities to a truly compact 1911 pistol.

As a long time competitor Bill Wilson is well aware of the advantages of the 38 Super. It is a fantastic caliber for 1911 pistols with 4-inch barrels in either steel or aluminum frames. With a very fast recoil impulse it is fast on target and incredibly accurate. It is a bit snappier than the 9mm, but is actually easier to control. It remains the choice of many top end competitors for just that reason. The higher velocities allow them to make major categories and the fast cycling time keeps the pistol on target.

Understanding the need for a truly compact line of 1911 pistols Bill Wilson introduced the Sentinel line. These are sub-compact pistols designed from the ground up for deeper concealment, lightweight, and complete reliability. The first of these pistols were chambered in 9mm, a proven cartridge in pistols with short barrels. Given his experience with the .38 Super caliber it only seemed logical to try it in this platform.

Starting with the Sentinel aluminum frame the Super Sentinel is mated to a 3.5-inch carbon steel slide. This frame is 0.5 inches shorter than a compact frame and includes 30-lines-per-inch checkering on a high cut frontstrap. It contains a crisp and predictable trigger measuring 3.5 to 3.75 pounds. A high-ride beavertail safety is used as well as a tactical thumb safety. The magazine well is shaped and contoured to facilitate accurate magazine changes. It is topped off with a set of G10 Starburst grips.

Using a 3.6-inch Match grade barrel, it is carefully hand-fitted to the slide. It is a coned barrel with a fluted barrel and chamber as an optional upgrade. The top of the slide is grooved to deflect glare. Wilsonâ€™s Battlesights with a fiber optic front sight are used. A full-length guide rod and reverse plug are installed to increase accuracy and reliability. Elite Tactical magazines designed for the Sentinel are provided that hold eight rounds of ammunition. Coated in Armor-Tuff and placed in a Wilson Combat Nylon case the Super Sentinel is a powerful pistol in a small package.

Having had the opportunity to test several of the Sentinel pistols, they all are very easy to conceal. This line was designed from the ground up for deeper concealment and the thought going into it is evident. Easy to conceal yet fast to grip, the Sentinel is comfortable and reliable.

They will fit in pretty much any 1911 holster, those designed for 3-inch barrels seem to work the best. Most of the testing for this piece was accomplished using a Mitch Rosen (603-647-2971; mitchrosen.com) inside-the-waistband that has been around for years. It was also carried in a Galco (800-874-2526; galcogunleather.com) ankle holster and an outside-the-waistband holster also made by Mitch Rosen. In ever case it concealed well with very little printing. It is easily one of the most comfortable 1911 pistols to carry you can get.

The Super Sentinel was very accurate, and surprisingly easy to shoot. The best group at 15 yards was accomplished using the Winchester 125-grain Silver Tip. Measuring 0.87 inches at 15 yards, it is a tack driver at typical engagement distances. Although no groups were fired at longer ranges I did shoot steel at 25 yards. With the proper hold, regular hits from off-hand on a 6-inch plate were pretty easy. At 50 yards it was about a 70/30 proposition from off-hand. That is pretty solid considering the 3.6-inch barrel, small frame, and high-pressure ammunition. With all my time on a 1911 little has been spent with .38 Super. To me it was always just a game cartridge, that attitude has definitely changed.

Shooting this pistol will be a bit different for those used to a .45 ACP, or even a 9mm. It has the same feel as my 10mm when fired in a full-sized 1911. The recoil impulse is very similar. Clearly not as stout, but the overall feel is similar. It is very fast, over with quickly, with a loud report â€” it is probably best characterized as â€œsnappy.â€ That makes it easy to keep on target, the front sight just does not move much. The hottest of the loads, the CorBon was a bit harsher, but not overly so. It is really very comfortable to shoot. Fast follow-up shots were easy, and with a solid hold it was very accurate on the move.

The short frame size did allow me to get a solid grip. My rather large hands can have issues wrapping around these smaller frames. The high-cut coupled with a basepad meant my little finger could get ahold of the grip. As one might expect with a pistol of this quality, it worked perfectly. Four magazines were provided and all loaded easily and worked well.

Velocities did seem to drop quite a bit with the shorter barrel. It seemed to be pretty consistent at just a bit over 100 feet per second (fps) for each load. The CorBon was listed at 1,425 fps, but measured 1,304 fps. Most everything else measured right around 1,100 fps out of the 3.5-inch barrel. Given the hottest loads you are still getting close to 480 foot-pounds of energy at the muzzle, plenty for concealed carry work for sure, especially out of a pistol this size.

Given my age, and the time I spend on the range my wrists can be a bit sensitive to magnum loads, especially coupled with small pistols. A long day with my 10mm means my wrists and elbows are a bit sore. Years of shooting as well as a few other physical endeavors have taken their toll. Even a 45 ACP these days can be uncomfortable after a long day. Not so with this pistol. It was a bit of a surprise to be honest. At the end of the day there was an expectation of being sore, but it was not the case. Given the lightweight and short frame it was a rather pleasant surprise.

This is really the first time spending real quality time with a .38 Super pistol. Although some time was spent on a friends pistol who is a big fan, it was still minimal. After getting some real time with this pistol it becomes clear why there are so many fans. Especially in this platform, it is a winning combination. It provides full-bore 9mm velocities or better in a very small package. It proved to be reliable, accurate, and easy to control. For those unaccustomed to the recoil impulse it will take some getting used to, but once that happens it is a real joy to shoot. Getting ammunition will take some pre-planning, although there seems to be a great selection on the net, local purchase was less than stellar. It took some travel to several gun stores just to get enough for a solid test. Once you climb that hurdle though you have a fantastic little pistol for concealed carry. If you are looking for a custom 1911 designed to conceal easy yet pack a real punch, then make certain you give this pistol a good look. For more information, please visit wilsoncombat.com or call 800-955-4856. 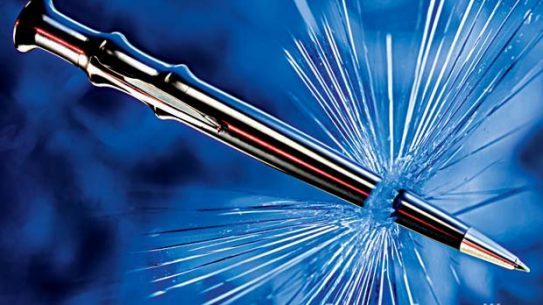