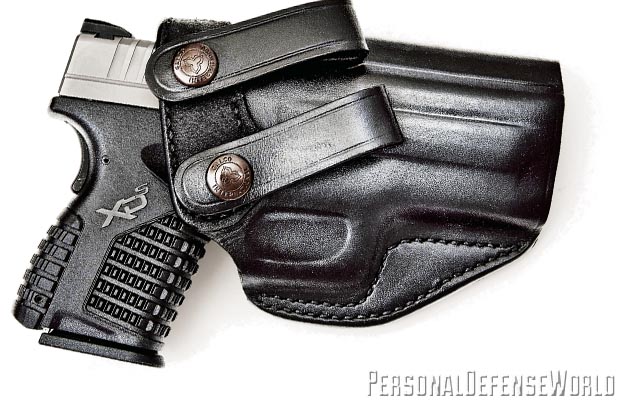 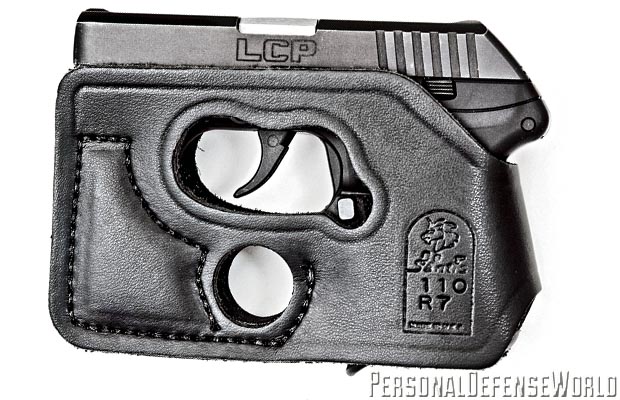 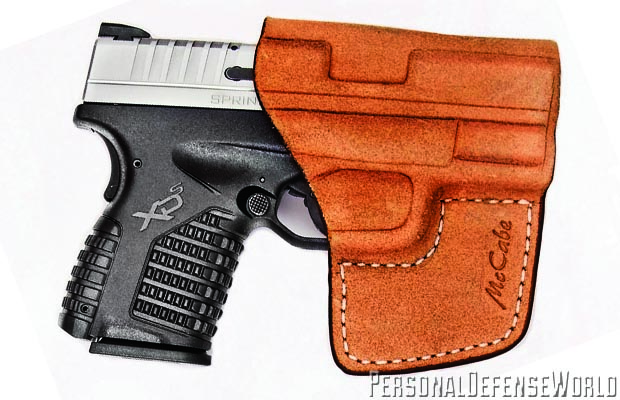 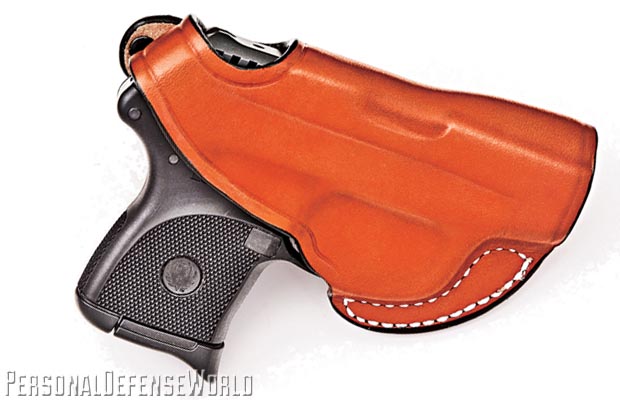 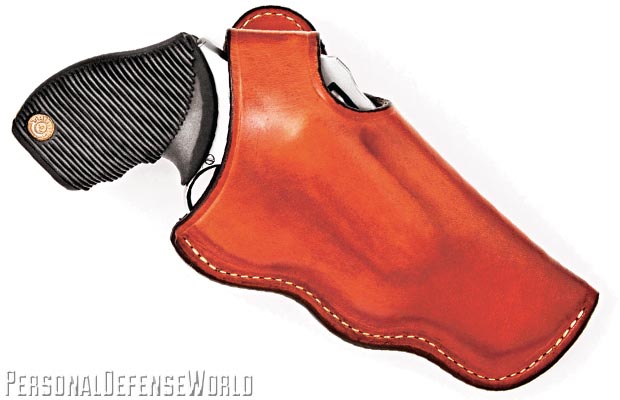 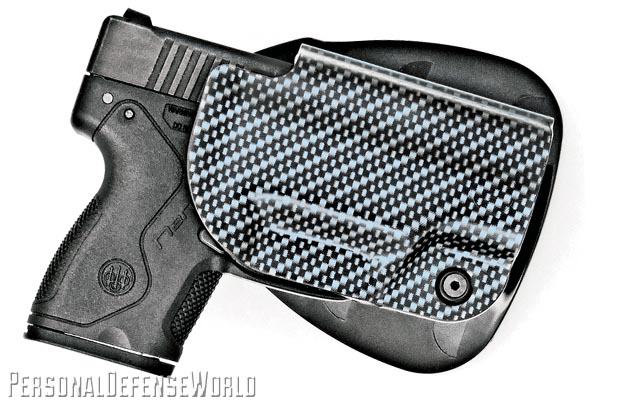 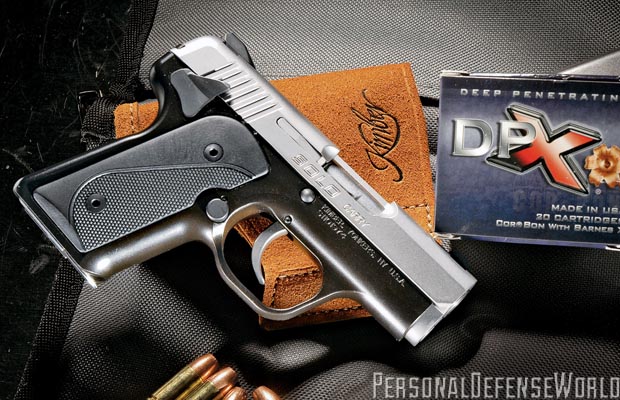 7 of 7
PDW PP 13 Holsters
Pocket holsters protect the gun from debris and prevent “printing,” where others can see the outline of the gun. 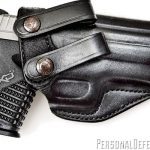 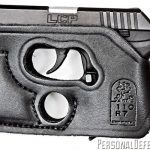 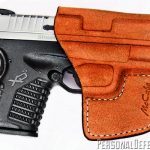 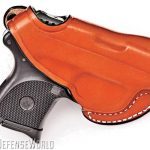 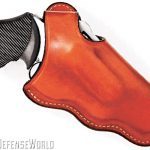 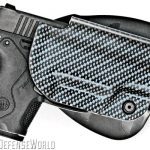 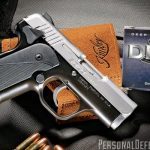 There was a time when “pocket pistol” was a literal definition. Pistols were carried in pockets. Back in 1908, when Colt introduced the .25 ACP Pocket Model Hammerless semi-automatic, then one of the smallest handguns in the world, they were also known as “Vest Pocket Models” because gentlemen often carried them in a vest or waistcoat pocket. Holsters were rare and the .25-caliber Colt was sometimes even secreted in a chamois coin purse case, and that too was a literal definition, a leather coin purse with metal clasps designed to hold a small semi-auto or revolver. More than a century later, many pocket pistols still go in pockets, most chambered in .380 ACP (and there are still .25 ACP semi-autos around, too), a few in 9mm that are “pocketable” and a rare handful in larger calibers up to .45 ACP. But today, “pocket pistol” is a general category for any compact, subcompact, or ultra-compact revolver or semi-automatic intended for concealed carry, pockets notwithstanding.

With the increase in CCW permits over the past decade, the majority of major armsmakers in the U.S. and abroad have introduced smaller-sized semi-autos and revolvers in a variety of calibers, some more unusual than others, such as the Charter Arms Pitbull snubnose revolver chambered in .40 S&W, a cartridge originally intended for semi-autos, while other manufacturers have simply rewritten the book on concealed carry dynamics, like Springfield Armory and its new XD-S semi-auto, the smallest .45 ACP autoloader in history.

The following is a breakdown of the latest and best concealed carry rigs for compact, subcompact and smaller revolvers and semi-autos. What you carry and how you can carry it has changed greatly since the days when pistols first went in pockets, but one thing has never changed about concealed carry—concealment.

The belt holster is the oldest and still most popular means of carry for revolvers and semi-autos. Today’s selections range from traditional combat styles like the Galco Combat Master, the Kramer MSP paddle with a distinct FBI forward cant, to trim slide holsters that use the minimum amount of leather to retain the gun, such as the Galco Yaqui slide, to nearly indestructible high-tech composite, Kydex and injection-molded rigs like the Beretta ABS holster and DeSantis NYPAD. Whether on a belt or suspended from a paddle tucked over the waistband, belt holsters are still the bedrock of concealed carry.

This is an evolutionary design based on the old, and not often wise, idea of just sticking a gun inside your waistband. We see it in movies all the time and it really works, but guns have a habit of moving around and occasionally falling out, or worse, down your pant leg! The inside-the-waistband holster or IWB was developed in the late 19th century (yes, that long ago) to provide support for a concealed carry pistol—originally a small-caliber double-action or short-barreled single-action revolver. Today, the level of sophistication in IWB designs offers one of the best options for carrying concealed.

The ankle holster is another very old idea that has never lost its merit with the passing of time. Spring-clip ankle and wrist holsters for small guns like the Remington Over/Under Derringer were popular in the early 20th century. Today’s modern ankle holsters are refined versions with sturdy leather pouches, hook-and-loop closures and sheepskin padding to make them comfortable around the ankle. Some use elastic, others are all leather, but none provide quick access to the firearm, thus the ankle holster is generally relegated to backup guns. The ankle holster remains popular with law enforcement and private security as a secondary line of defense.

Back in 1930, world famous Colt gunsmith, shooter and law enforcement consultant J. Henry Fitzgerald said, “The front pocket is a good place to carry a revolver.” What was true then is true now, and not only for revolvers. Pocket holsters were first developed for small six-shooters back in the late 1880s, most for Colt and S&W pocket revolvers, later for Colt’s Model 1908 Hammerless .25 ACP and small European semi-autos like the FN Model 1900. Over the last 100 years, the dynamics of a pocket holster have most definitely changed and today’s high-tech versions not only provide safe cover for your revolver or semi-auto, but secure, upright placement for ease of draw. Whether made from suede, rough-out-finished leather, or any number of synthetic materials, modern rigs make certain that a front pocket is a good place to carry a gun.

Shoulder holsters are generally for larger semi-autos and revolvers, but there is also a long history of shoulder rigs for snubnose revolvers and .380 autos that dates back to the early post-WWII era and guns like the Colt Detective Special, S&W Chief’s Special and Walther PPK. Many of these rigs are still made today, as well as shoulder holsters for small-frame semi-autos, however, the focus here is on innovative carry styles for new subcompact semi-autos. 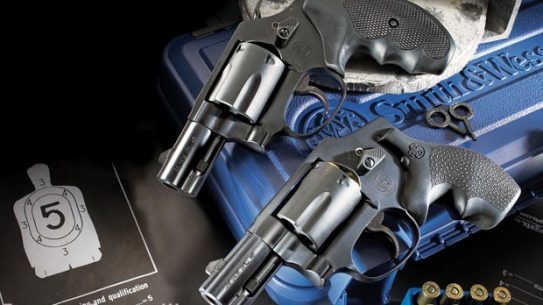 There was a time when “pocket pistol” was a literal definition. Pistols were carried…