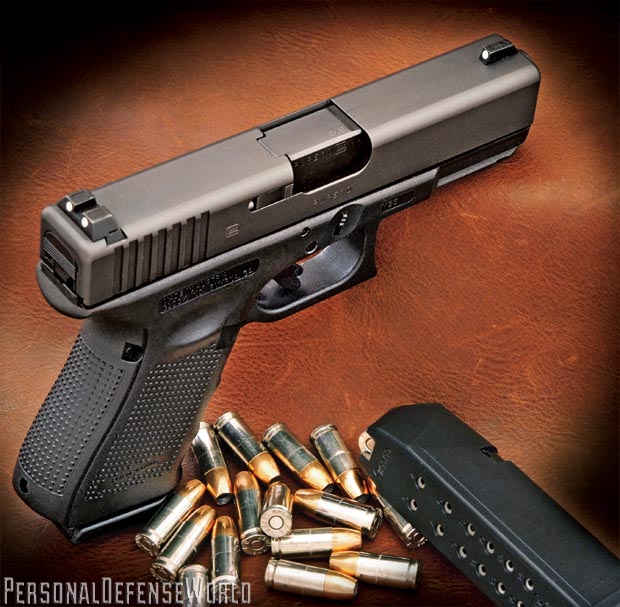 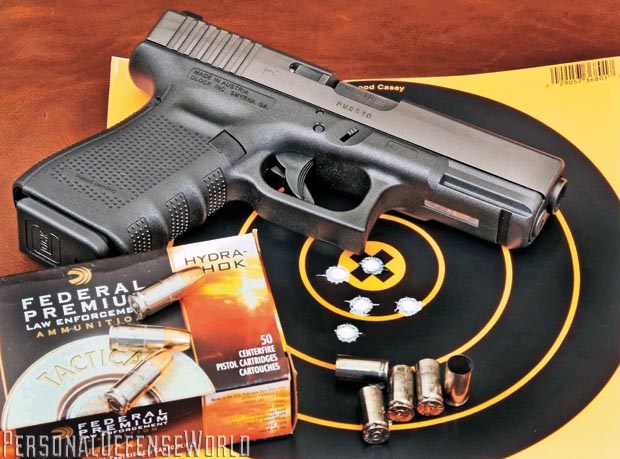 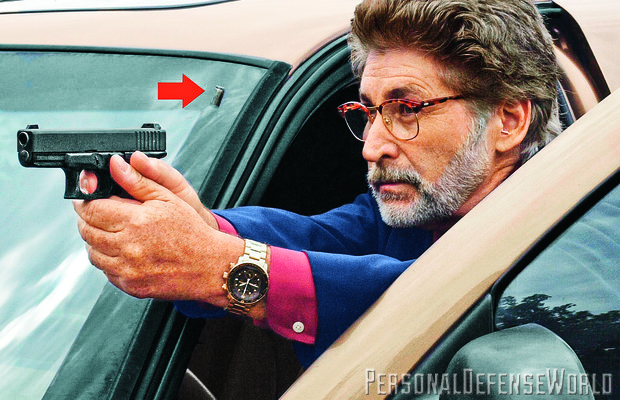 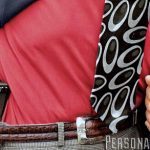 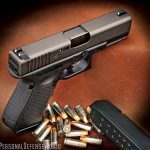 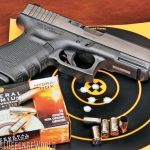 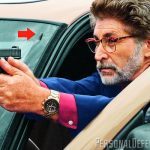 When one hears the history of the Glock pistol, it almost invariably starts with the Glock 17 pistol. Gaston Glock began working on the revolutionary design in 1980, and within two years had a fully functional pistol that was adopted by the Austrian military. Glocks were then rapidly accepted by NATO, and, by the mid-80s, had come to America to eventually become the most popular (and also most imitated) semi-automatic pistol. It has evolved over the past three decades, but the basic conceptualization has remained the same: a safe, simple and fast pistol for individual self-defense.

Along with the Glock 17, which can be characterized as a “full-” or “service”-sized pistol (although it was considerably lighter and more compact than contemporary pistols of the time), there were a few variants. One of these was the Glock 17L (L for “Long”). It had a barrel 6 inches in length, and a target trigger setup, i.e. a “minus”-marked connector, which originally gave a trigger pull of around 3.5 pounds. Usually equipped with first generation Glock adjustable sights, there were two barrel configurations, one with compensator slots cut into the barrel and one without. A non-compensated version was used by a Miami police officer, Armando Valdes, to win the IPSC World Championship in practical shooting. And then, a modification of the Glock 17 came about, producing one of the most popular Glocks ever—the Glock 19.

One of the critical first sales of the Glock 17 was to the city of Miami, Florida in the late 1980s. Other police departments had purchased Glocks (notably St. Paul, Minnesota), but Miami at this time in history was well known internationally, sometimes infamously so. Crime was high, drugs flowed in and around the city, and civil unrest shook the city at times. The Miami Police Department began a search to adopt a new sidearm, with two important qualities: it should be a semi-automatic, and it must have a “double-action-only” fire control mechanism. The desire for a semi-auto was a response to the perception that criminals outgunned officers on the street with high-power automatic weapons; this was a common motivation for American law enforcement to switch to semi-auto handguns in this time period.

The exceptional request was for the pistol to be “double-action-only”(DAO), i.e. a revolver-like, consistent trigger pull for every shot.

Such an action was not generally available then; the majority of pistols were double-action for the first shot; that is, pulling the trigger brought the hammer to the rear and released it. Subsequent shots (unless the pistol was decocked), were single-action-only, where pressing the trigger released the hammer. This desire for a DAO came about because of a regrettable (but legal) action some years before, when a police officer had cocked his revolver on a suspect. A struggle ensued and the suspect was shot. This ignited riots in the city, and one of the results in the aftermath was that the department rendered its revolvers double-action-only. If they were going to switch, the new pistols would also have to be DAO.

Major domestic manufacturers reportedly took a take-it-or-leave-it attitude; they were not going to develop a new fire control mechanism for one department. But the U.S. government classified one new design as DAO: the Glock.

Tough testing and adoption followed. Miami would be the first high-profile user of the Glock pistol. And then, another request from the department: could there be a compact version of the full-sized service Glock? This dovetailed with requests from European organizations. So, the push for the Glock 19 began—a pistol that would soon be carried around the planet.

The First Generation Glock frame designs are often referred to as having a “pebble surface” exterior texture. Mr. Glock’s design philosophy is evident here: simple, smooth—the term “elegant” has been used. Glocks would have an absolute minimum number of parts (around 34, including sights), compared to their legacy competitors made of steel and wood. The Glock 17 had a distinctive silhouette, which continues to this day, and this was carried over to the Glock 19.

Indeed, the very first Glock 19s imported into the U.S. were “cut down” Glock 17s! With serial numbers beginning in the “Alpha” range, these early G19s were early proof of the concept of a compact Glock pistol design. It appealed to those who wanted a pistol a bit more concealable. A slightly smaller pistol could be concealed by administrators, plainclothes/undercover officers and qualified citizens. It did, however, have a standard magazine capacity of 15 rounds, and could take the larger G17 magazines and accessories. In fact, the majority of internal parts, about two-thirds, were interchangeable with the larger Glock. It also embodied the soon-to-be world-famous Glock qualities of safety, reliability, simplicity, accuracy and durability. It was, after all, just a smaller Glock 17. Within months, however, both the G17 and its direct descendant, the G19, would change.

As the Glock 17 received new features, these were automatically passed on to the compact Glock 19. Most obvious was a new surface for the polymer receiver, which had molded checkering on the front and rear straps of the Glock. The grip panels were roughened, and a captive recoil spring assembly became standard.

This was the pistol that began the perception of the compact Glock 19 as “Planet Earth’s Pistol.” History shows that while there was politically motivated “concern” about semi-automatic firearms (with accompanying media distortion and hysteria), the police commissioner of New York City began carrying a G19, as did some special units of the NYPD and suburban departments on Long Island bought thousands for their officers. The compact G19 eventually became the most popular sidearm of one of the biggest law enforcement agencies in the world, the NYPD, as officers could carry it both on- and off-duty due to its compact size. Over time, the NYPD adopted a high-performance load, the 124-grain Gold Dot jacketed hollow point, and standard-capacity magazines, as the G19 serves with distinction today.

A short time later, some U.S. military Special Operations units took a serious look at the Glock 19 and began carrying it on overseas deployments. There were a multitude of reasons, but first among these were the reliability and simplicity of the weapon. It worked even under extreme conditions; it was a weapon an operator could bet his life on. Other reasons the superior handgun was desired included its worldwide ammunition availability, simple maintenance procedures and shootability—here defined as dependability, ease of handling and practical, fast accuracy.

This, of course, did not go unnoticed by the American buying public. Probably because many in the NYPD used Glock 19s, American shooters began purchasing thousands, then tens of thousands, of the compact model. Women shooters, an important emerging demographic, seemed in large part to prefer the G19. And there was another evolution coming.

With the advent of small, powerful illumination devices, operators began to work on how to attach same to handguns. Glock responded with a new frame design, the Finger Groove and Rail (FG&R). This frame incorporated molded rails forward of the triggerguard, which aligned lighting devices coaxially with the bore. Additionally, Glock’s design allowed a quick and easy mount and dismount of said devices, without any special parts or attachments. It was another success for Glock. With the coming wars in the 21st century, the Glock 19 saw duty in every corner of the world. Law enforcement adopted it, the military carried it into battle and tens of thousands of private citizens relied on it for self-protection.

The design matured, and there seemed little else that could be done to improve the G19. In due course, sound suppressors had been engineered to work with the basic platform, and sighting systems abounded. There was a version with a much more aggressive, sharper frame surface, the Rough Textured Frame 2 (RTF2). Another used olive drab green (OD) coloring for the polymer frame. Customizers modified the base model (usually negatively, affecting reliability). Glock did not remain static, however.

Once again, a model of the Glock 17 formed the basis for the next Glock 19. The fourth generation, or Gen4s, introduced in 2010, featured a new surface finish and more traction surface around the entire circumference of the frame. There is a multiple backstrap system to adapt the pistol more comfortably to different hand sizes. A larger and reversible magazine catch contributes to ease of use and adaptability. Perhaps most significant from an engineering standpoint is the dual recoil spring assembly, which had a greatly increased lifespan and aided in shooting control.

Over the years, the Glock 19 has met and exceeded performance specifications. Firearms instructors the world over recommend it and back up that recommendation by carrying it daily. This author has shot numerous tests/evaluations/qualifications with a G19, and received “Advanced” classifications.

The Glock 19 is reliable, practically accurate, powerful, concealable, comfortable and simple in design and maintenance. It has all the qualities to make it the “Planet Earth’s Practical Pistol.” We can only wait to see what Glock has in mind for the next generation. To find out more call 770-432-1202 or visit glock.com. 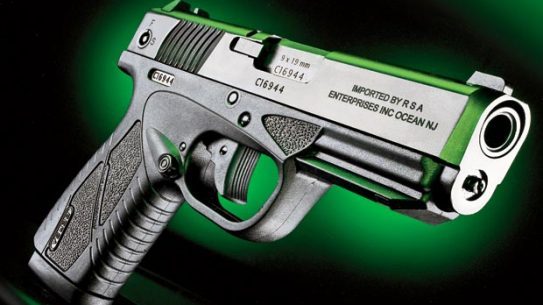