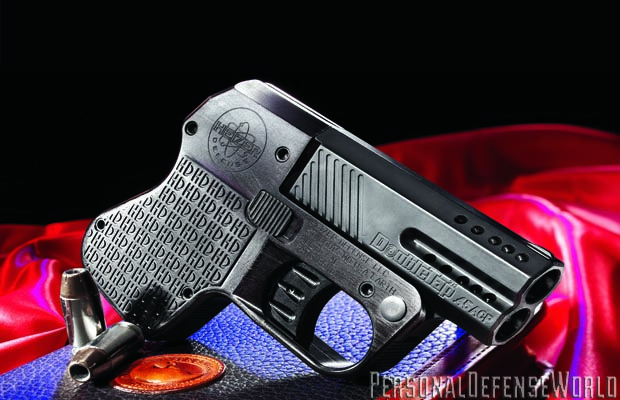 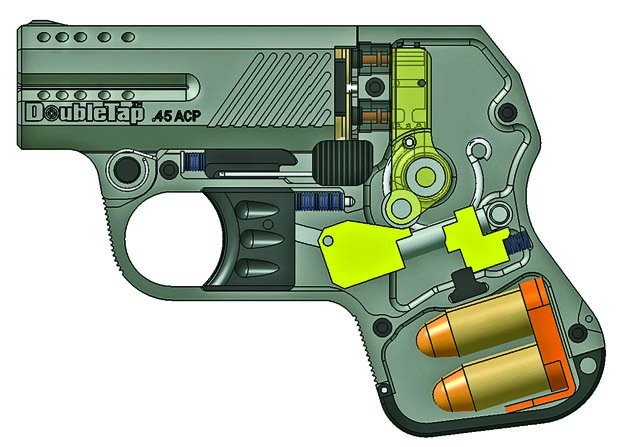 2 of 2
DoubleTAPPDWPP13b
The ambidextrous thumb latch above the trigger releases the barrels, and the grip houses two spare .45 or 9mm rounds. 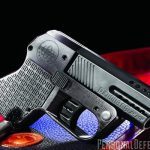 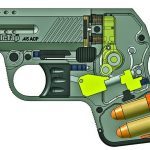 Ray Kohout wanted to create an easy-to-use, large-bore weapon for self-defense. He started from scratch—with no pre-existing trigger, transfer bar, sear or hammer configuration. Ray also wanted to use titanium as the base metal for the firearm, a revolutionary decision. The same metal that made the incredible and still unrivaled SR-71 Blackbird aircraft, titanium is incredibly lightweight and tough. So tough that most metalworking companies cannot machine it. But he found an American aerospace manufacturing company perfect for the job—Heizer Aerospace.

Heizer Aerospace’s founder, Charlie Heizer, watched WWII being fought from his front door in a small town in Hungary that was first occupied by the Germans, and later, the Soviet Union. After the war, he got a degree in engineering and escaped in 1956 by crossing minefields and slipping past border sentries. After starting a machine shop in the basement of his home, Charlie formed Heizer Aerospace, specializing in the design and manufacture of aircraft parts made from exotic metals on some of the largest Gantry CNC machines in the world. When Ray gave a detailed presentation about his titanium pistol plans to Charlie, it took about two minutes before Charlie interrupted, saying, “Let’s do it!”

The Heizer Defense DoubleTap is a two-round pocket pistol as concealable as it is innovative, proven by its seven pending patents. The 100 percent American-made powerhouse is only 0.67 inches wide and weighs in at 14 ounces. As a result, the DoubleTap is the slimmest and lightest large-caliber pocket pistol on the market today. Its hammerless design makes the pistol snag-free, and the break action features a patent-pending progressive barrel porting option that cuts muzzle rise and recoil. The ambidextrous thumb latch releases the action and allows the shooter to remove the man-stopping .45 ACP (or the universal 9mm) spent casings and rapidly reload one or both barrels.

As part of making the pistol more useful to the shooter, the loaded rounds are visible from either side of the pistol, and the barrel can be easily changed between calibers available now and those introduced in the future. The DoubleTap carries two rounds in the chamber and the integral grips house two additional spare rounds. Needless to say, if you need to solve a problem with only one or two shots, the .45 ACP is the only way to go.

The final production guns incorporate over a dozen notable improvements, including low-profile, no-snag front and rear sights, a Melonite finish on stainless steel barrel assemblies with a Rockwell 65 hardness, titanium or aluminum frames finished with Cerakote or hardcoat anodizing, a lanyard pin on the rear of the grip, serrations on the trapdoor compartment, a stronger needle bearing in the double-action trigger system, a channel machined into the spare round compartment to secure rounds, a squared-off trigger, enlarging the HD pattern on the integral grips, enlarging the rear palm swell area of the frame to reduce muzzle rise, simplified “drop free” empty case removal for reliability, and a new hammer position to enhance safety.

Ray was able to place his rounds right where they were aimed with pre-production models. The DoubleTap was easy to control, consistently knocking down steel plates from 7 to 10 yards using both of the .45 ACP and 9mm barrels. Follow-up shots were as accurate as the first—the weapon was easy to return to a natural point of aim due to its 1911-style ergonomics.

Discharging a .45 ACP round from a 14-ounce pistol results in noticeably sharp recoil, but it’s very controllable for a second shot. However, the optional barrel porting, especially on the .45 ACP, greatly reduces the felt recoil and muzzle flip. Additionally, plans are afoot to create an oversized grip for non-concealed use and/or a nylon slip-on grip to enlarge the surface area and soften the recoil. Ray, a frequent competitive shooter, noted that the .45 ACP DoubleTap was fun for the first five rounds but that he could have shot the 9mm all day.

The ultra-modern DoubleTap is made for when seconds count, the shooter is under stress, and big rounds are needed to solve a life-threatening problem. Designed from scratch and featuring a truly revolutionary double-action trigger system, the DoubleTap is available with an extremely durable titanium or aluminum frame. For more information, visit heizerfirearms.com. 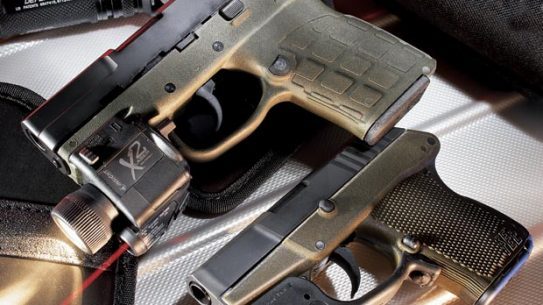 Ray Kohout wanted to create an easy-to-use, large-bore weapon for self-defense. He started from…