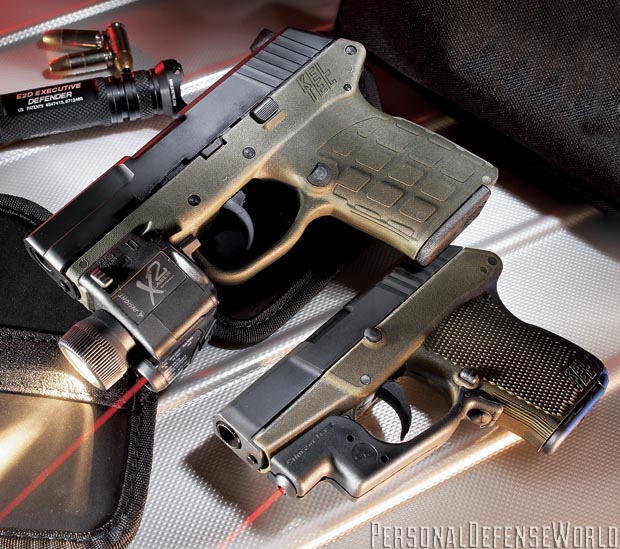 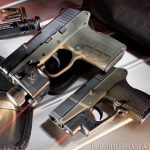 Companies dedicated to the production of high-quality firearms like Kel-Tec, who recently exceeded 1 million firearms built, produce firearms specifically made for concealed carry for people who rely on themselves as their first line of personal protection. One of those excellent and bestselling designs is the Kel-Tec P-32, a semi-auto .32 ACP pistol that happens to be the slimmest of its kind ever made. The ultra-lightweight pistol has a barrel length of 2.68 inches with a long double-action-only (DAO) trigger pull between 5 and 6 pounds. The P-32 has no manual safety, but it has an internal hammer block and has been tested to ensure that the pistol will not fire if dropped. The P-32 has a 7+1 capacity of .32 ACP cartridges in a single-stack magazine.

The P-32 easily disassembles into slide, barrel, recoil rod/springs, frame, and retainer takedown pin. The takedown pin, retained by a detent and spring, can be removed with tools or even a fired .32 ACP cartridge case. The P-32’s barrel and slide are constructed with SAE 4140 ordnance steel while the internal frame, which houses the firing mechanism, is machined from a solid block of 7075-T6 aluminum. The ultra-high-impact polymer for the checkered grip, frame and trigger is molded from Dupont ST-8018. The polymer material can be produced in any color, which several distributors have taken advantage of to market unique colors and designs that vary from pink to camo. The slides are available in blued, Parkerized and hard-chromed versions.

The P-32 has a long, consistent, trigger pull that helps prevent inadvertent actuation of the firearm but doesn’t shift the position of the pistol in the shooter’s hand during firing. With modern loads and bullet design, the little Kel-Tec is routinely carried by many professionals who value its successful compromise between featherweight concealability and its lethality when accurately placed.

Almost identical in almost every respect is the .380 version of the P-32, the compact P-3AT. Although it carries one round less than the P-32, the P-3AT is an excellent and accurate defensive weapon with the same weight, internal workings and small-frame advantages of the P-32, but it can launch a 90-grain Hornady Critical Defense FTX bullet at 988 feet per second (fps), while the P-32 can launch a 60-grain Hornady HP/XTP projectile at about 977 fps. I was able to put rounds within a 6-inch target at 7 yards (where most self-defense situations occur) using both the P-32 and P-3AT, but the P-3AT produced tighter groups for me. Both had a long but controllable trigger pull and a brief muzzle flip that was easy to bring back on target.

For 9mm fans, Kel-Tec has provided their P-11 and PF-9. Both pistols are a handful of authority. The higher-capacity P-11 and lighter PF-9 are semi-automatic, locked-breech, DAO pistols chambered for the 9mm Luger cartridge. The 14-ounce (unloaded) P-11 comes with a 10-round, double-stack magazine with an optional 12-round magazine available. The 12.7-ounce PF-9 was developed from the highly successful P-11 and P-3AT pistols for maximum concealability but with the punch of a much larger platform. The barrel, locking system, slide stop, assembly pin, front sight, recoil springs and guide rod are adapted from the P-11. The PF-9 is nearly identical to the P-11 in length and height and shares the same exterior controls. The shorter trigger system with integral hammer block and the extraction system are adapted from the P-3AT. Just like the P-11, the PF-9 will accept +P ammunition, however, not with continuous use. The light and flat PF-9 carries a full load of seven rounds in the single-stack magazine (supplied with a finger extension baseplate) plus another in the chamber. Both the P-11 and PF-9 are available in blued, Parkerized and hard-chrome finishes. The pistols are powerful but comfortable and controllable for both men and women.

All of Kel-Tec’s pocket pistols have been cloned, with an increasing number of lookalikes entering the market, but only Kel-Tec has the years of experience and lifetime warranty that thousands of law enforcement officers, CCW permit holders and shooters all over the country rely on. They carry their Kel-Tec pistols knowing that it is their reliable last line of personal defense. So when their life is on the line, their Kel Tec pistol will roar with authority to keep them safe from deadly threats. For more information, visit keltecweapons.com or call 321-631-0068. 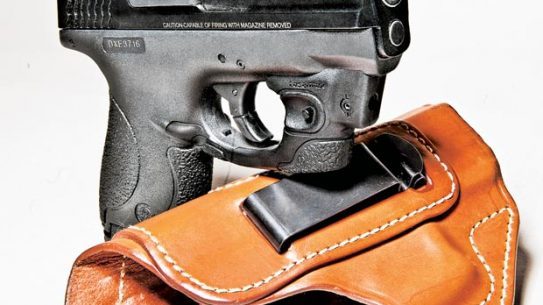 Companies dedicated to the production of high-quality firearms like Kel-Tec, who recently exceeded 1…