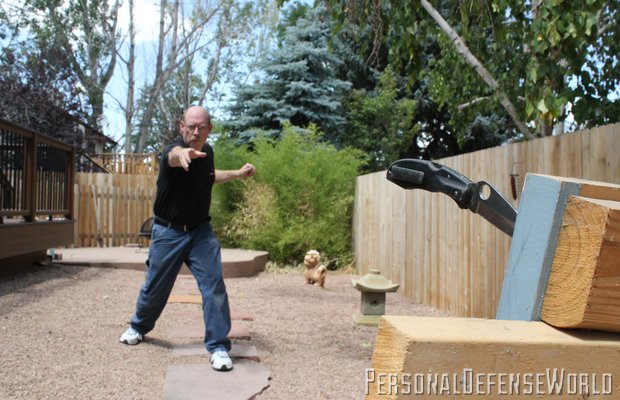 1 of 4
04 – Knife stick_phatchfinal
Although a successful throw is equivalent to a powerful stab, the odds of hitting a fight-stopping target are slim. 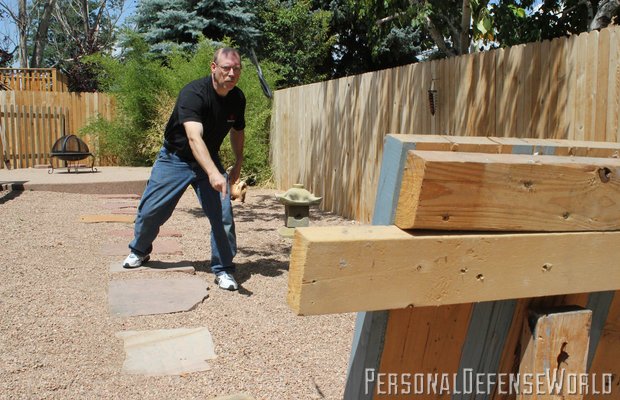 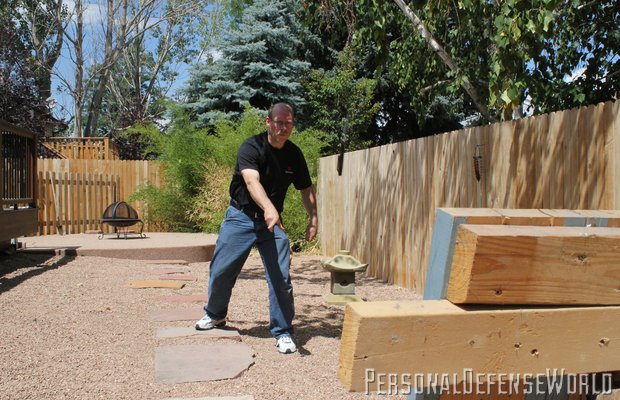 3 of 4
03 – Knife throw C_phatchfinal
Knife throwing is great fun, but as a combat-effective tactic, its application is extremely limited. 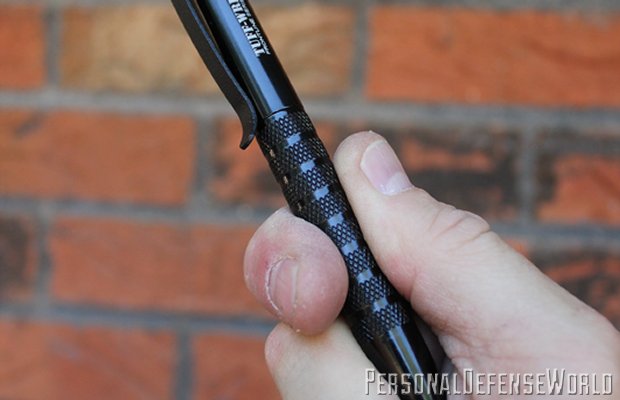 4 of 4
05 – Pen as throwing weapon_phatchfinal
The most practical defensive application of knife throwing skills is to throw an innocuous improvised weapon with knife-like balance—like a tactical pen—to distract your attacker and create an opportunity to draw a better weapon. 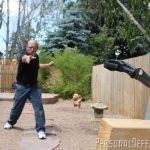 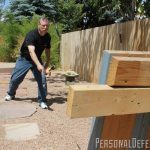 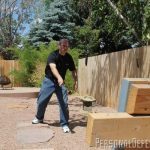 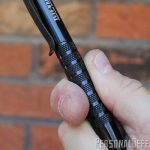 One of the most controversial and misunderstood aspects of combative knife tactics is knife throwing. As a sport, it’s a fun and challenging discipline—but throwing a knife at a dynamic, moving attacker is a whole different story. Despite what you see in the movies, the odds of throwing a knife from an unknown distance and not only having it hit your attacker point first, but actually penetrate a vital target, are incredibly slim.

With that said, knives have actually been thrown effectively in combat and have produced rapid one-shot kills. The most famous successful combative knife throws were those of Medal of Honor recipient John Caviani in Vietnam (see Tactical Knives Nov. 2012 “It Happened to Me”) and famed Native American knife thrower George “Skeeter” Vaughan’s 87-foot throw during World War II. Interestingly, both of these throws were targeted at enemy sentries facing away from the thrower. While this doesn’t diminish these astonishing achievements, it does help put combative knife throwing into a more realistic context.

In assessing the practicality of combative knife throwing, it’s important to note that many traditional Eastern and Western combat methods did include the practice of throwing knives and other edged and pointed weapons. However, if you research these systems and look at the totality of their tactics, you’ll find that, while they considered weapon throwing viable, they never relied on it as their only tactic. Throwing blades were typically used as a distraction or a means of “softening up” an enemy before following up with a more capable weapon. If a thrown weapon happened to be a fightstopper, that’s great, but it was typically not expected to be that effective.

Physics & Practicalities
The most practical way to throw a knife-like object is to hold it by one end and throw it overhand. Thrown in this way, the knife will typically spin in flight, which means that the point will only face forward—toward the target—about 25% of the time. If your throws are consistent, the knife will spin consistently and the ranges at which the knife’s point faces forward will also be consistent and predictable. With practice, you can learn to accurately judge and throw from those distances to get your knife to hit point first.

1 of 4
04 – Knife stick_phatchfinal
Although a successful throw is equivalent to a powerful stab, the odds of hitting a fight-stopping target are slim.

3 of 4
03 – Knife throw C_phatchfinal
Knife throwing is great fun, but as a combat-effective tactic, its application is extremely limited.

4 of 4
05 – Pen as throwing weapon_phatchfinal
The most practical defensive application of knife throwing skills is to throw an innocuous improvised weapon with knife-like balance—like a tactical pen—to distract your attacker and create an opportunity to draw a better weapon.

There are also “no-spin” methods of knife throwing, which involve snapping your wrist and sliding your index finger down the handle of the knife as you release. These actions essentially kill the knife’s spin as it leaves your hand and allow it to fly point forward like a spear. However, they also require fine motor skills and a somewhat softer throw to stick the knife at longer ranges.

With practice, both the traditional and non-spin methods can be used to throw and stick a knife consistently. What good is that in a combative situation? In my opinion, it comes down to a very dangerous form of dodge ball. To understand this, find a friend and a tennis ball. Starting at a distance of about 6 to 8 feet, throw the ball at him and see if he can dodge it. Keep increasing the distance until you miss more than you hit. That’s basically the practical effective range at which you can throw a small, hand-held object at a person and achieve a desirable result—either hitting him to cause some type of pain or damage or causing him to duck and cover. Either one of those results creates a moment of opportunity for you to transition to a better weapon to continue the fight.

Bridging
To apply this to practical self-defense, think of an innocuous knife-like object that you can carry in your hand without drawing attention—like a pen. Imagine that you are approached by an unknown person with hostile intent and attempt to diffuse the situation using verbal skills and boundary setting. Suddenly, he begins to draw a weapon, justifying you to do the same. To improve your chances of getting your weapon out and into action in time, use your knife-throwing skills to throw the pen with accuracy and intent. Is it likely that the pen will stick him in the eye and kill him instantly? Of course not. Is it likely that the pen will even hit point first? That depends upon your level of skill and your ability to judge distance accurately. However, hitting him hard enough to flinch even momentarily while you draw a more capable weapon is still well worth the effort.

In my opinion, this use of a thrown object as a “bridging” tactic to a better weapon is the most practical combative application of knife throwing. It probably won’t end the fight, but applied properly, it certainly helps your cause. 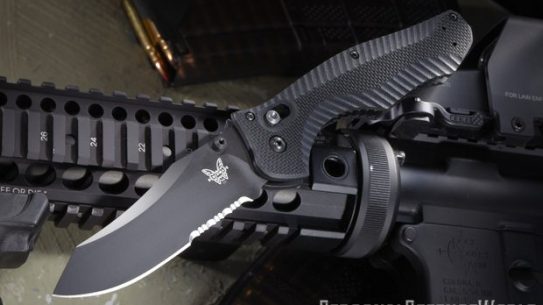 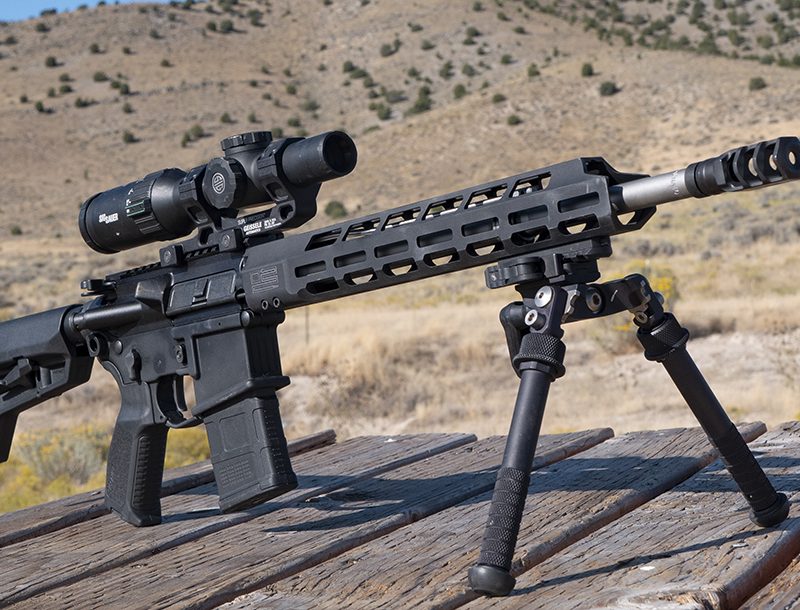