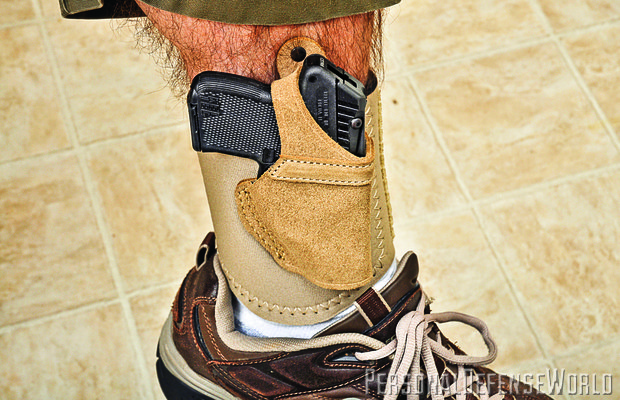 1 of 3
Holster05_phatchfinal
Galco’s thumb snap ankle holster holds the pistol securely and would be a good choice for deep cover carry. 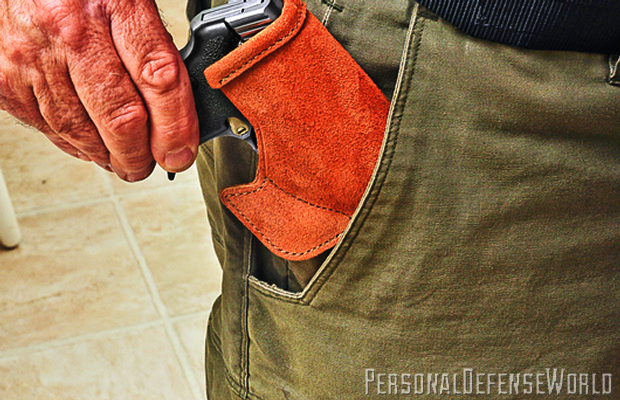 2 of 3
Holster06_phatchfinal
This Galco front pocket holster positions the handgun for fast access. 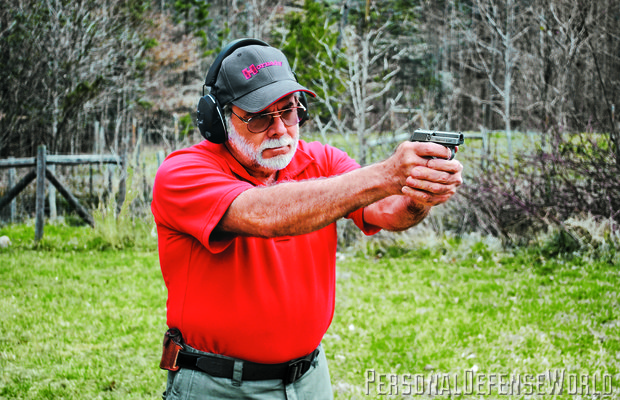 3 of 3
Shoot02_phatchfinal
Despite their diminutive sizes, all four .32s handled well and put rounds just where they needed to go. 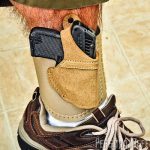 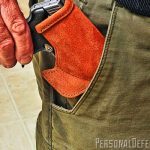 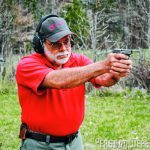 Manufacturers of “modern” .32s have taken advantage of recent technical developments—they utilize stainless steel, high-tech alloys and polymers in their construction. Considering the distances at which such pistols are likely to be used, many of the guns feature double-action-only (DAO) triggers, with others having traditional DA/SA trigger mechanisms. Included among DAO and DA/SA handguns are the Kel-Tec P-32, the Seecamp LWS-32, the Beretta 3032 Tomcat and the North American Arms 32 Guardian.

Kel-Tec is well known for their line of polymer-frame, sub-compact pistols, and many credit their P-32 as the driving force behind the resurgence of .32 ACP’s popularity. It is a striker-fired, locked-breech design with a polymer frame and a steel slide, and at 6.6 ounces it is the lightest of the .32 pistols I tested. A 10-round extended magazine is available for the P-32 and provides a full-sized grip. Like many polymer-frame pistols, it is not “double-strike” capable, which means in the eventuality of a misfire the slide must be retracted slightly to reset the striker.

The Seecamp LWS-32 pistol is the smallest .32 ACP pistol currently on the market. Made from 100-percent stainless steel, it is a retarded-blowback design. When fired, the cartridge case expands into a recessed ring in the chamber, delaying opening of the breech until the bullet has left the barrel. I received one of the new California Edition pistols with a push-button trigger safety located on top of the DAO trigger. The LWS-32 does not have any sights, but considering the distances it will likely be used at, I don’t see this as a downside. It should be noted that the manufacturer recommends that only Winchester Silvertip ammunition be used.

Beretta’s 3032 Tomcat features an alloy frame and a forged steel slide (stainless is optional), an external hammer, a manual safety and a unique tip-up barrel. It lacks an extractor, relying upon the expanding powder gases to force the spent casing rearward. This means that racking the slide will not remove unspent or defective cartridges. For that reason, it has a tip-up barrel that allows easy and safe loading and unloading. While it has a DA/SA trigger, there is no hammer-drop system, so the hammer must be lowered manually on a loaded chamber, although the thumb safety does enable cocked-and-locked carry.

Featuring 100-percent stainless steel construction, the North American Arms Guardian 32 is blowback-operated and uses a DAO trigger. It can be had with an Integral Locking System that uses a key to immobilize the hammer, to prevent unauthorized firing of the pistol. Like the Kel-Tec, its magazine release is located in the “proper” position and is available with an optional 10-round magazine with a grip adaptor for a full three-finger purchase.

As is quite obvious from their size and intended purpose, most .32 pistols are designed to be carried concealed. In fact, this is one of the main attractions of such mouseguns. And while several of them are small enough to be carried concealed by anyone other than a nudist, we must take two other things into consideration: comfort and ease of access. If you find a pistol uncomfortable to carry, chances are you will leave it home or in the glove box of your car, where it doesn’t do you a whole hell of a lot of good when you’re confronted with an attack.

If you knew a violent confrontation was likely to occur, you would already be carrying a shotgun or an AR carbine, although doing so might be frowned upon by your fellow citizens to say nothing of members of the local constabulary. Which leads us to one of the primary reasons for handguns: they can be carried almost anytime and anywhere, and as the old saying goes, “The best gun is the one you have on you.” Depending upon the climate, your mode of dress or duty, carrying a tiny pistol may be your only practical choice. However, being heeled doesn’t do you any good if you cannot access your handgun and quickly get it into action.

1 of 3
Holster05_phatchfinal
Galco’s thumb snap ankle holster holds the pistol securely and would be a good choice for deep cover carry.

2 of 3
Holster06_phatchfinal
This Galco front pocket holster positions the handgun for fast access.

3 of 3
Shoot02_phatchfinal
Despite their diminutive sizes, all four .32s handled well and put rounds just where they needed to go.

Carrying a pistol stuffed into your belt, pocket or purse in unadvisable, as it is likely to become positioned in such a manner as to not be readily accessible. The most practical and comfortable way to carry a handgun is in a belt holster for a smooth and quick draw. My second choice would be an IWB holster, although as some of us already have too much inside our waistbands, it might be uncomfortable (and we have already discussed the downsides of that). Both carry methods require that you wear some kind of garment to conceal the handgun, although in the case of the IWB holster, wearing your shirt outside your pants might suffice. Depending on the climate, a belt holster could be problematic while the IWB would only be suitable if you are someplace where a very casual mode of dress is acceptable.

A third alternative and the one I favor is in a front-pocket holster (FPH), which allows you to carry the pistol in the pocket of your trousers. FPHs have a flat profile that helps break up the pistol’s “signature” while keeping it positioned for easy access. Many are made from materials with a rough exterior, which actually clings to the inside of your pocket, so the pistol can be withdrawn while the holster stays. The roomy pockets inside cargo pants make this type of carry extremely practical and permit fast access to the pistol. Lastly, we have the ankle holster. While this places the pistol in a difficult position in terms of access, it does allow carry without a concealment garment. This method is often favored by law enforcement officers for backup or deep-cover guns.

My friend Butch Simpson and I test-fired our quartet of .32 pistols, using samples of the above holsters provided by Gould & Goodrich, Galco, DeSantis, Bianchi and Safariland. We ran them through a series of drills on a target set out at 15 feet, putting every single round except one mysterious flyer on the target, and only five of them wandered outside of the highest scoring zone.

A few comments about our test pistols are in order. The Seecamp had no sights, but we were able to put rounds where we wanted them simply by using the top of the slide as an aiming device. Despite being the smallest of the pistols tested, we both really like the way it handled. While Butch and I both experienced hammer bite when firing the Beretta, its large grip provided the best recoil control of the four pistols. As expected, with its demure weight the Kel-Tec was the heaviest recoiling of the pistols, but when using the extended magazine it and the NAA Guardian were the easiest pistols to shoot. We experienced a few failures to feed and smokestack jams (the latter was always on the magazine’s last round) with each pistol except for the Seecamp, which ran 100 percent with the Winchester Silvertips. But being these were NIB guns, I felt that a bit of breaking in would correct these problems—it did.

While we were both impressed with how well these tiny pistols performed, Butch, a hardcore .45 lover if there ever was one, opined, “Yeah, but those are awful tiny bullet holes.” Which only reinforces my advice on practice and conscious shot placement.

If your duty, mode of dress, climate or personal preference requires you to carry a small handgun that is truly concealable, any of the .32 pistols we tested would work well. With the proper holster, they can be concealed and still be quickly gotten into action. My usual response to those who denigrate small-caliber handguns runs something like, “If confronted with a violent attack would you rather have a .32 or depend upon your negotiating skills to protect yourself?” 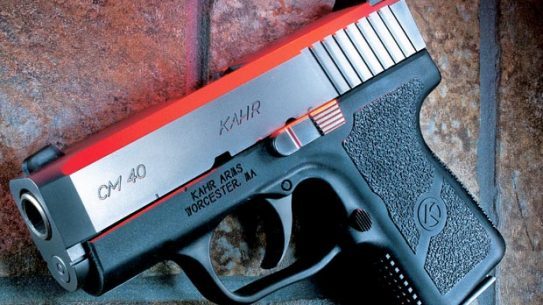