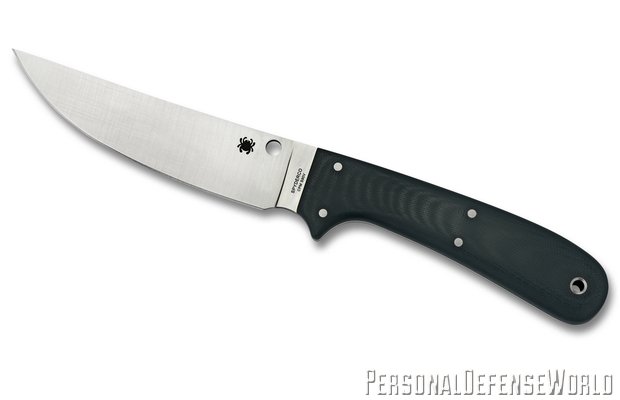 1 of 2
(2)SpydercoSouthFork_phatchfinal
Not only is Phil Wilson a consummate outdoorsman, he’s also a talented knife designer and maker. This South Fork model, made by Spyderco in collaboration with Wilson, features a CPM S90V blade and polished G10 handles scales with an integral guard. 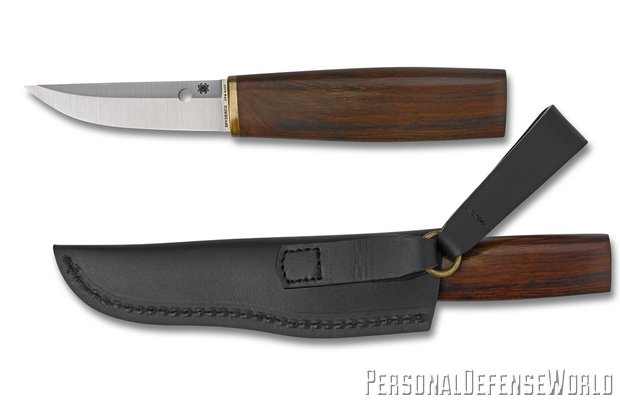 2 of 2
(1)SpydercoPuukko_phatchfinal
Crafted from CPM S30V, this Pukko concealed tang fixed blade by Spyderco is true to the traditional Finnish version. The knife features a “Scandi” grind that tapers uniformly all the way to the edge, a brass bolster, and a desert ironwood handle. 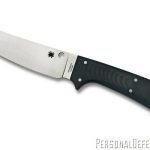 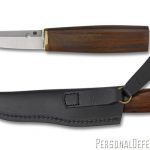 Since the advent of Particle Metallurgy, the cutlery community has had a steel manufacturing process designed specifically for the production of blade steel. This process produces an end product with extremely fine grain structure, as well as a homogenous distribution of similar sized carbides. This allows the steel to be edged upward slightly in hardness, without the typical accompanying brittleness. Furthermore, this technology produces steel with a near-total absence of contamination (inclusions), resulting in what can be termed as “clean steel.” To get a better idea of the attributes provided by this new technology, let’s look at an overview of three powder-made stainless steels that have been developed for knifemakers, CPM S30V, CPM S60V and CPM S90V.

A “Premium” grade blade steel it is considered easier to work with than the other CPM grades in this class. And the same thing is true when it comes to finishing and final edge production. The composition of this steel consists of: Carbon 1.45-1.50%, Chromium 14.00%, Vanadium 4.00% and Molybdenum 2.00%. The Vanadium carbides that form in the matrix of the steel are extremely hard and contribute to the refinement of the granular structure, as well as improving the wear resistance, toughness and sharpness of the finished product. Evenly distributed throughout the steel, the Vanadium carbides at the apex of the final cutting edge aid in enhanced wear-resistance. This somewhat similar to having tiny steel cleats evenly dispersed throughout the sole of your shoe, preventing surface contact from prematurely wearing the underlying sole material. Objective testing has established that CPMS 30V at a Rockwell hardness of Rc 59-61 possesses superior edge holding than 154CM/ATS-34, or even D2 tool steel. The Chromium content in the steel is comparable to that found in 154CM/ATS-34, but slightly less than 440C. However, when subjected to a Sodium Chloride solution at room temperature, CPM S30V proved to be far more resistant to corrosion than either 440C (which has a higher Chromium content), or 154CM/ATS-34. Obviously, this is more than enough corrosion resistance, even for hunters who often fail to regularly clean their knife blades after field dressing activities.

CPM S60V
This powder metal steel is designed from a 440C stainless base and is often termed 440V. Obviously, the addition of higher Carbon and Vanadium elements provide added corrosion and wear resistance. The chemistry of this steel is as follows: Carbon 2.15%, Chromium 17.00%, Molybdenum 1.00%, Manganese 0.40%, Silicon 0.40% and Vanadium 5.50%. Typically, CPM S60V is hardened to Rc 58-60, which is only a point lower than CPM S30V. However, the substantial increases in both Carbon and especially Vanadium give the steel enhanced performance when wear resistance is the primary driving factor. Of course, the added Chromium will provide better corrosion resistance than CPM S30V in high humidity venues like coastal Alaska, western British Columbia, coastal Washington and Oregon, as well as parts of our southern states. When the corrosion and wear resistance of CPM S60V are considered, it is proven to be superior to CPM S30V, but the added material and production costs associated with the use of this steel can factor against potential performance gains.

1 of 2
(2)SpydercoSouthFork_phatchfinal
Not only is Phil Wilson a consummate outdoorsman, he’s also a talented knife designer and maker. This South Fork model, made by Spyderco in collaboration with Wilson, features a CPM S90V blade and polished G10 handles scales with an integral guard.

2 of 2
(1)SpydercoPuukko_phatchfinal
Crafted from CPM S30V, this Pukko concealed tang fixed blade by Spyderco is true to the traditional Finnish version. The knife features a “Scandi” grind that tapers uniformly all the way to the edge, a brass bolster, and a desert ironwood handle.

CPM S90V
The steel is also known as 420V or 420 Modified with High Vanadium. The chemical formulation of this steel is: Carbon 2.3%, Chromium 14.00%, Molybdenum 1.0% and Vanadium 9.00%. Obviously, the steel has more than twice the Vanadium content of CPM S30V and almost double that of CPM S60V, which offers considerable improvement in wear resistance over 440C, D2, and other high chromium steels and even somewhat greater resistance to wear than its brethren, CPM S30V and CPM S60V. The high Vanadium content of this steel produces the formation of extremely hard Vanadium carbides, which frees up more Chromium to enhance corrosion resistance. Of course, the Carbon content of CPM S90V is more than that of CPM S30V, but that element remains in the shadow of increased Vanadium.

Future
While some would suggest that the three CPM steels mentioned herein could eventually replace 440C or 154CM/ATS-34. That said, however, in my opinion the added material and fabrication costs associated with knife manufacture would definitely be inhibiting factors. With many production cutlery operations continuing to use lower grades of stainless steel, like 440A and 420HC to keep costs at a reasonable level, it would seem that with the exception of a few special knife models, the various CPM steels would remain primarily in the realm of smaller production shops and individual makers. For more information on the knives pictured in this column, contact Spyderco calling 800-525-7770 or visiting spyderco.com. 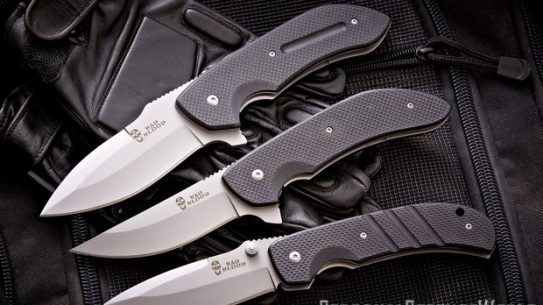 Since the advent of Particle Metallurgy, the cutlery community has had a steel manufacturing…