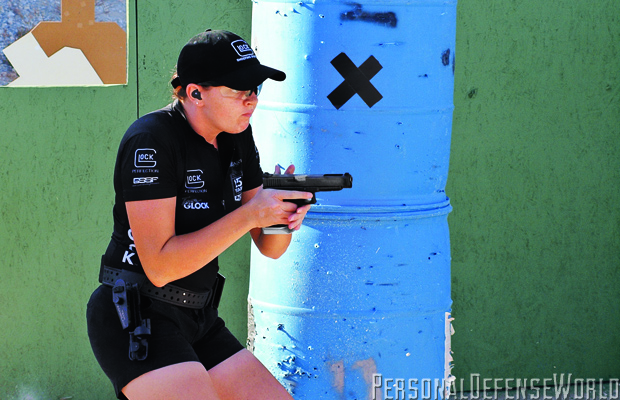 1 of 2
2011 USPSA Nationals
Moving and shooting is not an easy skill to learn and Randi manages well at the 2011 USPSA Nationals in Las Vegas, Nevada. In the weeks following the USPSA Nationals, she attended the 16th IPSC World Shoot In Rhodes, Greece. Randi shot hard and brought home the gold, winning the Ladies Standard Division World Championship. 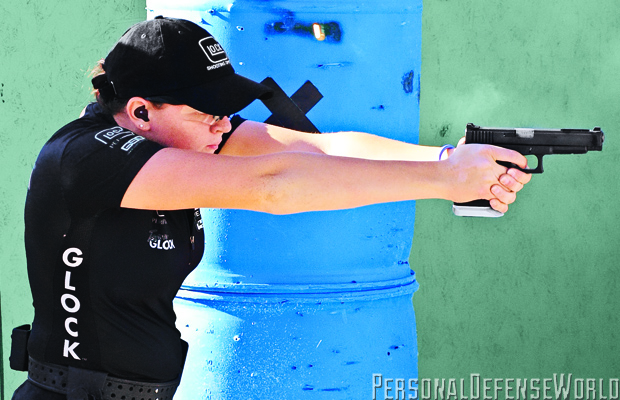 2 of 2
2011 USPSA Nationals
Moving and shooting is not an easy skill to learn and Randi manages well at the 2011 USPSA Nationals in Las Vegas, Nevada. In the weeks following the USPSA Nationals, she attended the 16th IPSC World Shoot In Rhodes, Greece. Randi shot hard and brought home the gold, winning the Ladies Standard Division World Championship. 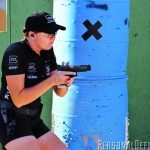 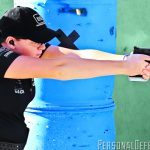 One of the jewels in GLOCK’s championship crown is Randi Rogers, formerly of Colorado and “Cowboy Action Shooting,” now a champion shooter in several practical shooting disciplines. We caught up with Ms. Rogers during a brief period while she was back at her home in Georgia and had a conversation about her shooting career and GLOCK. It proved to be quite informative.

Origins
Randi began travelling to Single Action Shooting Society (SASS) matches with her grandparents, “Evil Roy” and “Wicked Felina,” at the ripe old age of 11 years, back in the mid-1990s. She quickly wanted to compete and was outfitted with .22 rimfire single-action revolvers (“Bearcats”) and a lever-action .22 rimfire rifle. Within a few months, she moved up to .38 Special single-actions, lever-actions of the same caliber and a 12-gauge Winchester pump Model 1897 shotgun. The winner’s circle followed soon thereafter, with one defining moment early on. In her first National Championship she finished dead last, and Randi feels this gave her a definite sense of perspective. She had been under the incredible pressure of a National Championship and had endured. That endurance would be the tempering she needed to triumph in the cauldron of competition. She has gone on to claim 14 class wins in both junior (girls) and ladies’ categories at the SASS world championships. In 2002, she had a second overall placement!

Two factors are prominent here: First, her early shooting began with the .22 rimfire. Time and again, we see this as a common denominator among champions, whether on the competition range or in actual combat. One of the ways to start right is to start with the .22. Second, she received excellent instruction from her grandfather, Evil Roy who is also a World Champion. It helps to get it right the first time. Randi herself says that it’s a matter of “lining up the sights and pulling the trigger.” She also likes the rush that competition provides her.

After graduating from the University of Northern Colorado in 2009 with a degree in business marketing, Randi moved on to shooting other pistol disciplines with a GLOCK. Her grandfather, who had one GLOCK for personal protection, had already introduced her to it. She quickly distinguished herself in other styles of shooting, all the while adhering to the basics of sighting and controlling the trigger.

She credits the teachings and writings of Lanny Bassham as being a major influence in her mental approach. SASS competitons, and other practical shooting, sometimes have mano-a-mano shootoffs – competitor against competitor. This is probably one of the more intense venues from a mental pressure aspect, and she revels in it.

In her GLOCK shooting career, “just lining up the sights and pulling the trigger,” she is obviously doing something right. She has claimed National Championships in International Defensive Pistol (IDPA), United States Practical Shooting (USPSA), and Steel Challenge arenas. She has the high score for Ladies’ Production in the prestigious Bianchi Cup. She loves all the shooting sports and is dominating in the practical pistol games. This takes work; Randi will typically dry-fire for about 30 minutes daily, and strives to have “perfect practice” in her shooting sessions. The basics, she says, apply to all.

Challenges
In USPSA shooting, Randi appreciates the problems presented with each stage and likes the thinking and planning necessary to shoot the stage. IDPA is useful in a very practical way, particularly if you, like Randi, carry a handgun for protection. She packs a GLOCK 19. In Bianchi shooting, accuracy is paramount. While she enjoys speed shooting, she is absolutely cognizant of the fact that you have to hit the targets to get the points, and Bianchi tests that out to 50 yards.

Steel Challenge shooting, in Randi’s opinion, is the most challenging. All the elements of practical shooting are demanded: perfect draws, accurate shooting, transition from target to target – doing all that swiftly and efficiently. One can slip in position by a few hundredths of a second, so the mental pressure is also there.

Randi Rogers runs 2 to 3 miles several times a week and has taken up kickboxing for more exercise. She believes that women will be the salvation of shooting and works everyday to promote the shooting sports. She says someday she’ll compete “with the guys” – all the evidence points to her doing that brilliantly already. She wouldn’t trade her shooting for anything. Randi Rogers rules the range! 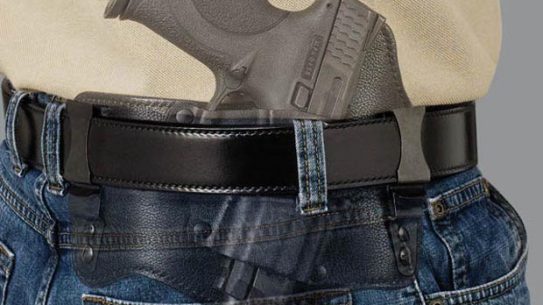 One of the jewels in GLOCK's championship crown is Randi Rogers, formerly of Colorado…