1 of 3
_DSF7612_phatchfinal
Here the author practices one-handed live fire with his Chief’s Special snub revolver in close-range, eye-level shooting—typical of a self-defense scenario. 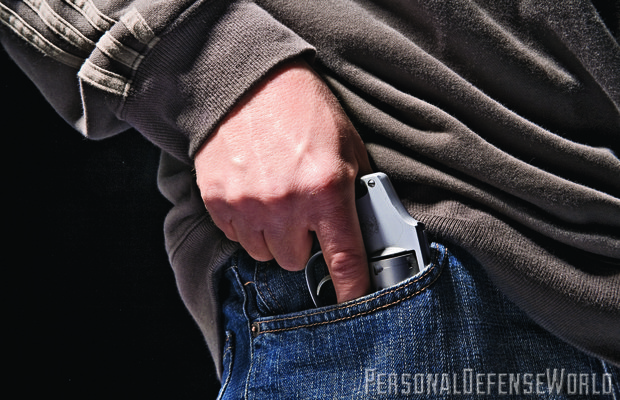 2 of 3
draw_phatchfinal
Pocket carry necessitates that a holster be used to ensure proper draw and safety. 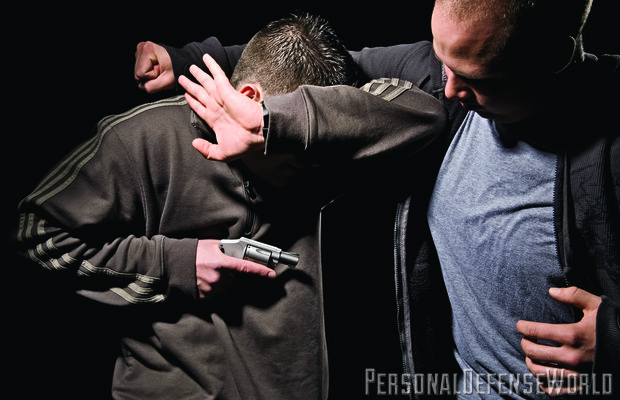 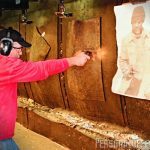 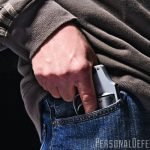 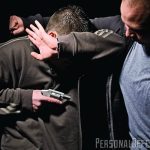 My late father was a big fan of the television series “The F.B.I.” starring Efrem Zimbalist Jr., which ran on ABC from 1965 to 1974. I can’t say that I shared my Dad’s enthusiasm for the show, but with one TV in the house and only three channels I often watched as well. On one memorable episode Inspector Erskine (Zimbalist), armed with a 2-inch Smith & Wesson Chief’s Special, shot a helicopter out of the sky. Needless to say, realism was not a large part of TV back then.

When I started working armed security while attending university, my first duty-revolver was a Model 10 Smith with a 4-inch barrel that I borrowed from my uncle. I purchased a Model 19 a couple years later after graduating from the Sheriff’s Academy, which I carried for years. But the second gun I ever purchased, and still have to this day, was a 2-inch barreled Chief’s Special. I haven’t shot down any helicopters in my career, but I have carried this revolver in belt, ankle, belly band and fanny pack holsters on-duty as a second gun and off-duty as my primary protection piece. And despite the proliferation of high-capacity semi-autopistols, the snub-nosed revolver still enjoys brisk sales and still protects police and private citizens worldwide.

Back in the day, there weren’t a tremendous number of reliable small-frame handguns available. You could buy a $40 Raven .25 ACP pistol, but controlled-expansion (hollow point) ammo in small auto calibers was limited. Some of these low cost pistols were referred to as “jamamatics” due to their propensity to malfunction during the feeding process. It only made matters worse if you carried on the ankle, where dust, lint and dirt are a reality. Small-frame pistols, with their tight tolerances, are not “tolerant” of the grime of everyday pocket, vest or ankle carry. A short-barreled five- or six-shooter is much more forgiving of exposure to the elements and grime of everyday life than a temperamental auto.

There has been a recent “rediscovery” of revolvers in general, though they never actually disappeared to begin with, and has lead to revolver classes being held at most of the big name training schools normally associated with the 1911 .45 ACP pistol or other large-frame semi-autopistols. Gunsite offers a defensive revolver course, which is described as “covering the practical application of the double-action.” The class will teach “marksmanship, manipulation, care and maintenance [of] the revolver in tactical live fire simulators and in low light conditions.”

Clint Smith, at the Oregon-based Thunder Ranch, offers a defensive revolver course. The course description states, “Although considered archaic by some, the ‘wheel’ gun is far from being stricken from the list of effective defensive tools by the educated. In the hands of knowledgeable persons, the revolver is more than an equal of any other defensive handgun. This course addresses the techniques and idiosyncrasies of the revolving handgun for personal defense.”

I’m sure these instructors would advocate a full-sized handgun if at all possible and admit that there is a time and place to carry a snub-nosed five- or six-shooter.

Although I’ve yet to attend any of these fine facilities or courses, they offer interested students the best in revolver training. If you are unable to attend Clint Smith’s Thunder Ranch facility, he offers some excellent training DVDs, including one on defensive revolver training, so you can study at home.

The best way for a standard CCW permit holder or police officer to carry a concealed weapon is by belt, with a quality holster. With this method, I’m a big fan of some type of security device, such as a thumb break or similar, to secure the revolver and prevent it from falling out during strenuous activities or being snatched by an attacker during a physical assault. Manufacturers like Bianchi, DeSantis, BlackHawk and Galco all make belt scabbards with thumb or finger breaks to secure your snubbie.

If pocket carry is your preferred method, whether in pants, vest or coats, DeSantis, Uncle Mike’s, Safariland, Galco, as well as many custom makers offer holsters. In addition, there are many specialty makers of clothes with pockets designed for carrying a concealed handgun: Custom Clothiers, with their vest line including leather and tropic weight vests; EOTAC with their vests, jackets and blue jeans; and Toters blue jeans designed by Blackie Collins.

1 of 3
_DSF7612_phatchfinal
Here the author practices one-handed live fire with his Chief’s Special snub revolver in close-range, eye-level shooting—typical of a self-defense scenario.

2 of 3
draw_phatchfinal
Pocket carry necessitates that a holster be used to ensure proper draw and safety.

Under-clothing garments such as belly bands, Thunderwear, compression shirts and shorts all offer options for toting your six-shooter under a loose t-shirt in hot weather or when involved in activities, such as jogging, when you normally can’t carry a handgun. Revolvers, as stated before, are more forgiving of sweat in high humidity of physical exertion than small autopistols.

Ankle carry is the preferred backup gun method for many police officers and can be used when attire such as beltless trousers are worn. This carrying mode was my primary method for concealing my backup Chief while assigned to uniform patrol as a young deputy sheriff.

To be effective and efficient in your draw-stroke, you must practice deploying from whatever location you conceal your gun. This is more safely conducted by unloading your revolver and practicing. Conscious thought must be given to safely practice your draw-stroke with dry fire. No live ammunition must be in the area and a safe backstop, i.e. brick wall, selected. Practice drawing from unconventional positions—seated in a chair, on your belly, on your back, etc.—so that you are familiar with the steps necessary to get your gun out. Shot timers are great training devices in dry fire as well as on the range as they place some stress on you, albeit small and artificial, in the training format.

I don’t know what conditions you’ll be shooting under—time, distance, number of adversaries, lighting conditions, the type of threat (suspect with a knife, tire iron, handgun or shotgun)—these all must be considered and prepared for. I won’t tell you to limit your training. To say that most shootings take place up-close and personal, within ten feet, is to deny the possibility of longer-distanced encounters. Sergeant Evan Marshall (retired, Detroit P.D.), the survivor of several armed encounters, said that he never saw the guy with the stopwatch and tape measure at the scene of any of his shootings. So we should prepare by training for most possible circumstances near and far, for long drawn out affairs and the extremely close and violent ones.

Double-action (DA) revolvers in the modern era are almost always fired in double-action mode. Trigger weights of these guns run from 12 to 15 pounds (my own reworked Chief Special has a DA trigger weight of just over 11 pounds, with a single pull of 2.5 pounds). Compared to a single-action semi-auto, the length of pull of a snub-nose revolver can seem extremely long (near half an inch). With practice, they can be fired extremely accurately, and they were not designed as target guns.

I’m not a fan of “point shooting.” The notion that hitting with a handgun is as simple as pointing your finger is ludicrous. I’ve seen far too many missed shots on the range and in force-on-force training with shooters subsequently saying, “Oh, you wanted me to aim!” What I want is for students to hit, and this is most practically achieved by bringing the pistol to eye level with two hands and “shooting through the pistol” or achieving some type of sight alignment. The late great Col. Rex Applegate, who advocated his own improved version of Fairbairn’s point shooting style, taught others to bring the handgun up to eye level. This was, according to Applegate, certainly aimed fire. Applegate suggested that man had an “internal clock” based on the perception of time and distance of the threat. By the way, Col. Applegate on one occasion used a small-frame revolver drawn from his pocket to shoot a machete-armed attacker.

Accurate fire on target is vital with small handguns, including snub revolvers. Limited ammo supply means that you have to A) shoot wisely and B) carry spare ammunition.

Fortunately, the development of speed strips, speed loaders, the Safariland Split-Six speed loader carrier, designed by Bill Rogers, and the DeSantis 2x2x2 ammunition carrier coincided with my revolver days, so carrying spare ammunition and reloading my six- and five-shot revolvers was easier than the days prior to their advent. Speed strips allowed you to easily carry six extra rounds (Mas Ayoob advocates carrying five rounds because it gives you more of the strip to hold on to) in the front pocket of your blue jeans. Bill Rogers-designed Split-Six permitted concealed carry of a speed loader. Both are easily carried and recommended as it’s always better to have it and not need it than to shoot that 2-inch-barreled blaster dry and left wanting for more.

It had been a while since I’d worked out with my Chief’s Special. Like me, the gun is well worn and shows signs of abuse (I call it “character”). Years ago, I had a fellow deputy, who was an armorer, bob the hammer to facilitate pocket or ankle carry, smooth out the action and cold blue the cylinder that was slightly pitted from ankle holster carry. I installed a Tyler T-grip adapter, which fills my hand better than the standard Chief’s Special grips and Barami Hip-Grips. The Barami Hip-Grips have an extension flange on the right grip which hooks over a belt or trouser band, preventing my J-frame from slipping down or falling out of your pants, allowing it to be carried sans holster. Shooting the Model 36 Chief’s Special was thoroughly enjoyable—it had a different feel and manual of arms from the high-capacity semi-auto pistols I normally carry. The old Chief doesn’t see much action nowadays, but it is far from being relegated to the dusty gun safe, never to be carried again. I may not have shot down any helicopters with my two-inch snub-nose, like the fictional Inspector Erskine, but it has served me long and well. Like other safety equipment, my snub-nose five-shooter is kept for when I need it. Maybe it should have its own sign, “In Case of Emergency: Revolver to the Rescue.” 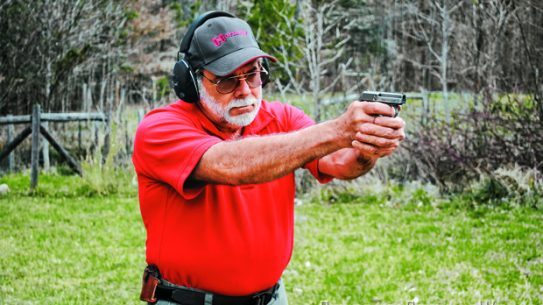 My late father was a big fan of the television series “The F.B.I.” starring…