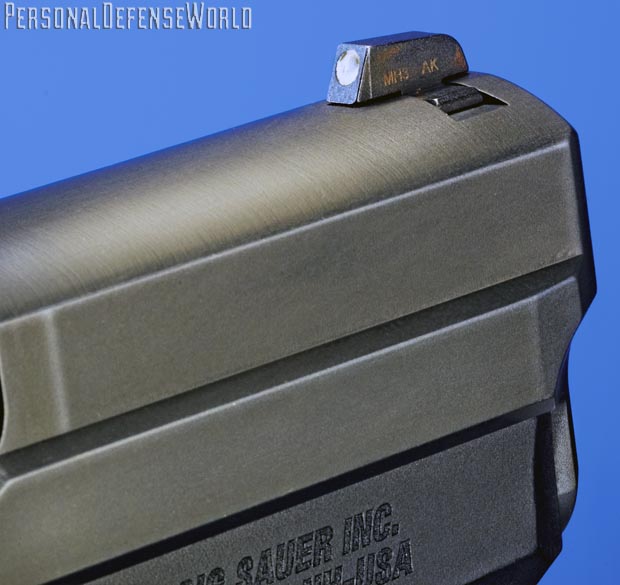 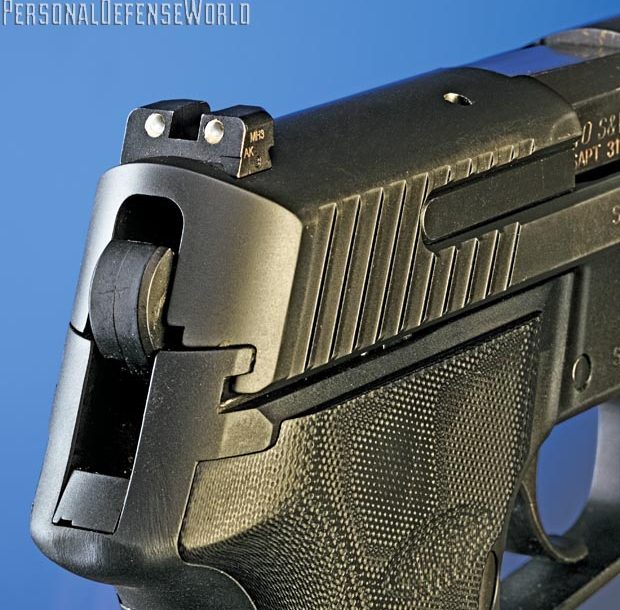 2 of 6
CH_Sig224_06_12 1145
Serrations allow for ease in racking, while a square edge on the rear sight facilitates one-handed operation. 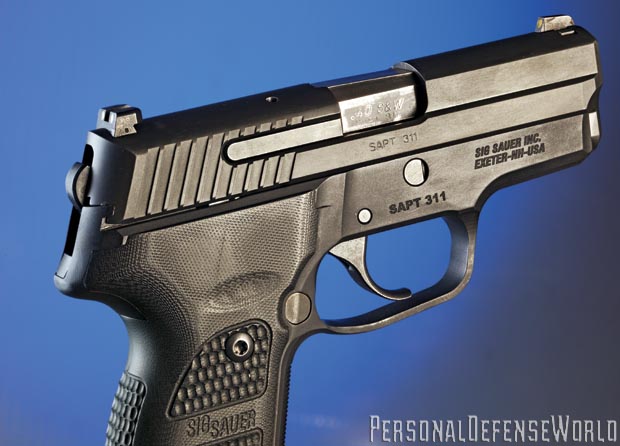 3 of 6
CH_Sig224_06_12 1144
The P224 is designed for concealment with a bobbed hammer and melted edges all around. There are no rough edges for the pistol to snag on clothing, and carrying close to the body is more comfortable. 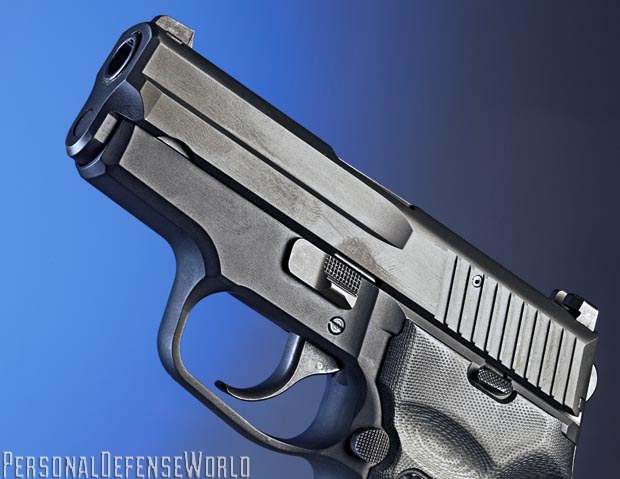 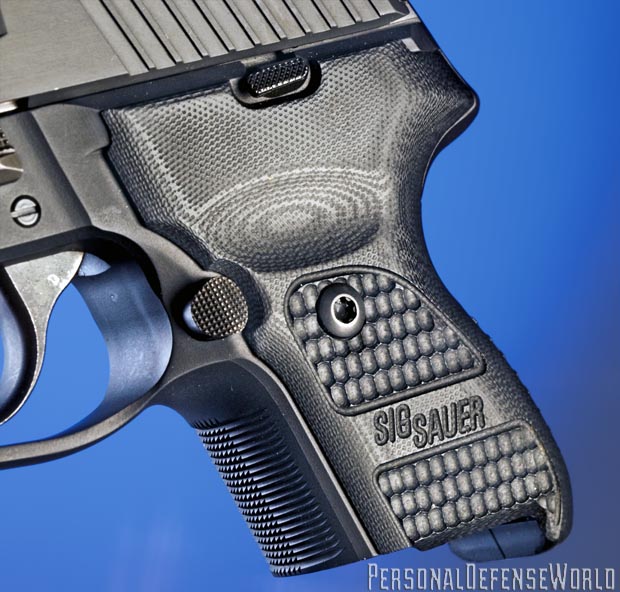 5 of 6
CH_Sig224_06_12 1139
The P224’s grip is based on the “reduced reach” design that is offered on other P-series pistols. Combined with Hogue G10 grips, thumbrest dimples and checkering on the frontstrap and mag baseplate, the P224’s grip is among the best available. Note the oversized mag release button. 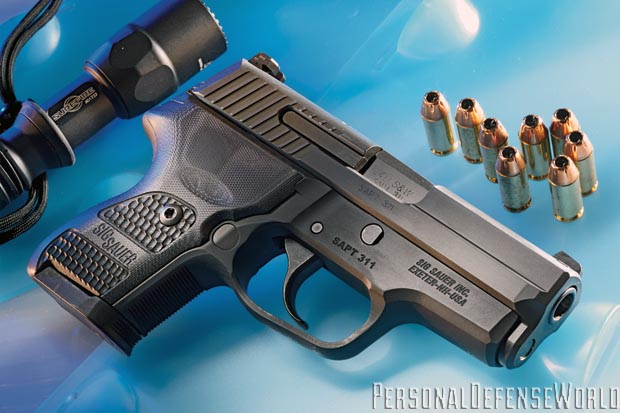 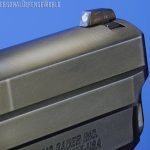 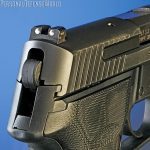 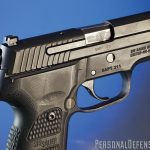 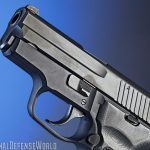 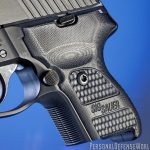 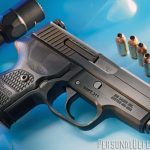 The P224 is the newest sub-compact size Classic Series pistol from Sig Sauer and was introduced in late 2011. Classic Series pistols have metal slides and frames rather than plastic. Four versions are offered in either 9mm, .40 S&W or .357 Sig and differ with respect to finish, sights and grips. Initial production pistols will be made in double-action-only (DAO), followed in late 2012 by double-action with a decocker.

The Sig Sauer P224 is “chopped down” P229 SAS Gen 2: it is 0.9 inches shorter in height and 0.4 inches in length. It also has additional “meltdown treatment” (i.e. rounded corners of the frame and slide designed to make carry close to body more comfortable and the pistol more easily drawn from a holster). A double-stack design, the P224’s magazine holds ten .40 S&W rounds versus twelve in the P229.

The P224’s frame is aluminum with hardcoat anodizing and the stainless slide, controls, takedown lever, hammer and trigger are nickel-plated on the test gun. The only parts that are not metal are the two-piece grips and the mainspring stop. Initial production runs are offered with the Sig Sauer designed Kellerman trigger. Known as the DAK, this trigger is used on all Sig Sauer pistols that are DAO.

Pistols with DAK triggers have bobbed hammers and allow for a “second strike” should you encounter a misfire from a hard primer.

Like all Sig Sauer pistols, the P224 has a firing pin locking device that allows the user to safely carry it in a proper holster fully loaded (11 rounds) with a round in the chamber.

Though all Sig Sauer P-series pistols are ergonomic with controls easily accessible and grips that are comfortable, the P224’s reduced reach frame makes for a more secure hold. The reduced reach frame is offered on several P226 and P229 pistols and was introduced to accommodate users with different sized hands who prefer metal frame pistols instead of plastic frame designs that often have interchangeable backstraps. The two-piece Hogue grips are made from G10 material and have dimple thumbrests.

The oversized magazine release is aggressively checkered and can be reversed for left-handed shooters. Lefties can also use the slide release lever by flipping the left thumb over the top of the slide or racking the slide by catching the rear sight on a belt buckle or side of your holster.

Sig Lite night sights made by Meprolight are three-dot design with tritium-filled vials surrounded by small white circles. Windage is adjustable by drifting the front or rear sights in their dovetails and different height sight blades are available for correcting for elevation. Important for a combat pistol, the rear sight has a square forward edge designed to facilitate a one-handed slide rack by catching it on a belt buckle or holster. This feature is essential if you get incapacitated and need to clear a stoppage or misfire with one hand.

The barrel has traditional land and groove rifling, which allows you to shoot inexpensive lead bullets compared to polygonal rifling which does not. With polygonal rifling, lead accumulates just ahead of the chamber and can cause an unsafe increase in chamber pressure. The manual does not prohibit the use of +P ammunition provided it meets SAAMI or military specifications.

Sig Sauer’s P-series pistols are extremely easy to fieldstrip using only a single lever, which allows the slide assembly to slide forward off the frame. The recoil guide rod is steel with a non-captive flat spring.

Though the Sig Sauer P224 will accept more recently made P229 magazines, only one 10-round magazine is supplied with the pistol. The front of the magazine baseplate is angled forward and checkered to match the frontstrap, thus giving you more surface to grip.

Accuracy testing was at 10 yards using Caldwell rests and was very good with all loads tested. The average group size with all ammunition was less than 3 inches and a few groups shot with both Black Hills 155-grain JHP or Black Hills reloaded 180-grain JHP were cloverleafs. The stock sights were approximately regulated for 10 yards with some loads shooting slightly low but with perfect windage. Sig Sauer sells replacement front or rear sights to elevate the groups to point of aim.

Understanding how to best use the DAK trigger and grip a sub-compact pistol will help your marksmanship considerably. The DAK is a true double-action trigger where the trigger must be released to recock the hammer after each shot. However, the DAK trigger has two reset points: one mid-way through the trigger release and the other almost at full release. The pistol can be fired by pulling the trigger at either reset point, but the trigger weight at the first reset is 9.5 pounds and 7.5 pounds at full release measured using a Lyman electronic trigger weight scale. That’s a significant difference.

When you need an accurate shot, shooting the P224 from the full reset position worked better for everyone who tested this pistol and is the recommended method of the Sig Academy. Simply “sweep through” the trigger in a continuous pull—do not pull it in stages with starts and stops. For firing accelerated pairs rapidly, most shooters tend to use the intermediate reset from force of habit. That method works, but training yourself to think of the full reset as the only reset does pay off in accuracy. It just will be a bit slower and take some training and dry fire.

The P224’s grip positioned my finger in exactly the correct place to deliver a quick trigger stroke straight to the rear without disturbing the sights. I did not have to adjust my grip or even focus on the trigger stroke. Its smoothness is demonstrated when dry firing: the sights do not move when the hammer falls. This ideal fit may not work for everyone, but getting a correct trigger stroke is critical, especially with a sub-compact that gives only a two finger instead of a full-hand grip. Though the .40 S&W is known as a snappy round with respect to recoil, the grip design and slide-heavy balance make it very controllable for two-handed firing and not uncomfortable for one-handed.

Because sub-compact pistols have short grip frames, you cannot get a grip with your pinky. Sig Academy’s Adam Painchaud says that shooting a sub-compact fairly well is possible by placing your pinky under the magazine and pressing upward and into your hand (like making a fist) then wrapping the support hand onto the pistol with a grip that is very high on the frame.

The Sig Sauer P224 functioned 100% reliably with five different types of ammunition, four of which had hollow point bullets. The pistol also functioned perfectly using a 9mm P226 magazine, though the rear of the magazine’s floorplate is sharp and may bite your hand. Yes, .40 S&W rounds can fit and function with some 9mm magazines. The full-size magazine does give a better grip and I could shoot more accurately using it. Having to use a full-size magazine is very possible for those who use the P224 as backup to another Sig Sauer, so practice shooting with both magazines.

Final Notes
For those who want or require a DAO sub-compact, the P224 should be on the short list of considerations. Yes, using the DAK trigger requires a technique that must be learned and practiced, but it is far smoother and lighter than many competitive DAO pistols. As a backup gun, it’s hard to beat the P224’s ability to use full-capacity magazines from the P226 or P229, though I would have preferred to have an extended magazine with fingerguard included with the pistol. 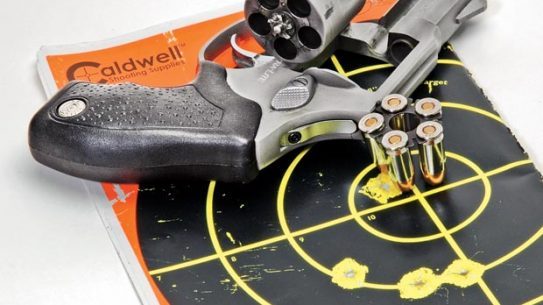