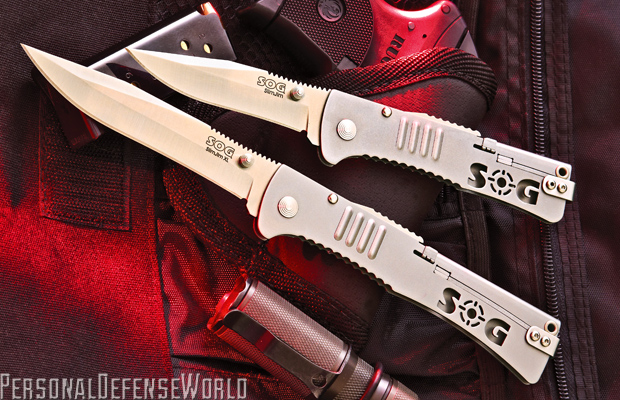 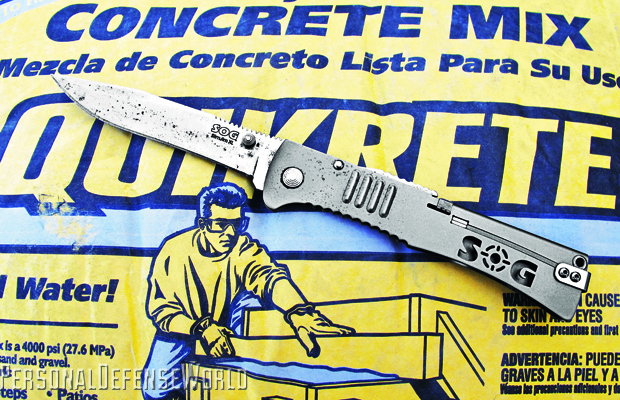 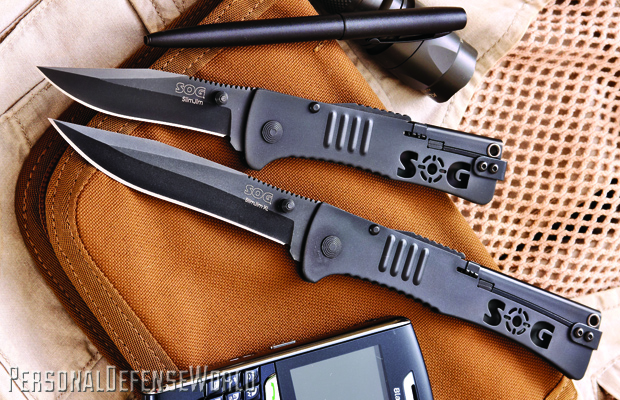 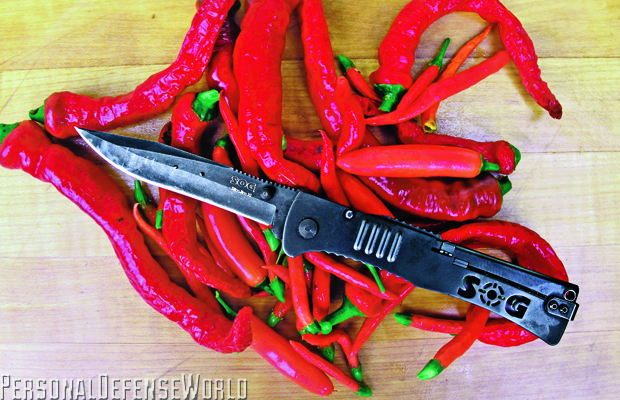 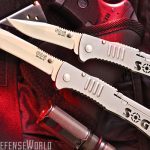 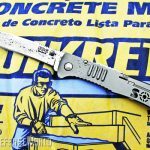 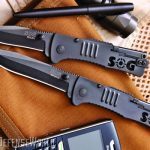 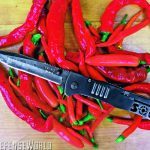 I have always been fascinated by watching machines that can make “things” from raw materials, probably because designing the tooling for anything like that is light years ahead of my own mechanical abilities. One machine in particular, that I have watched several times on a web video, feeds a constant stream of flat sheet metal into its dies and then folds each in to the handle for the classic Solingen utility lockback knife most of us call a “black panther.” The Germans are said to have developed this technique sometime in the 1890’s and the tough but inexpensive folders were very popular with their troops during WWI. In the 1920’s the French copied the basic process and produced millions of “trade knives” for their far-flung colonies in Africa and Asia. Both styles of knives are still in production, but the big news is SOG Specialty has taken the concept and truly updated it into a state-of-the-art 21st century tactical folder with their new “SlimJim” series.

The SlimJim currently comes in two sizes, a 4.13-inch blade and one 3.19 inches long. Both are available in a choice of flat gray bead blast finish or a black coating. The blade steel is AUS-8 stainless at an RC of 56-58. All are assisted opening with ambidextrous thumb studs and a reversible steel carry clip. The large version weights 2.7 ounces and the smaller 2.4 ounces. Suggested retails run between $65 and $90 depending on size and finish.

From the first, one of the features that made this type of knife construction so desirable was its extremely flat handle profile. Not only did this make these folders less of an encumbrance for pocket carry, it also made them handier for discrete concealment. Back during the 1960’s, the pattern was popular with users on both side of the legal fence as a self-defense weapon. The truth be known, I carried one behind my wallet daily through most of my teen years only, to give it to a friend working on a highway construction crew the night before I entered the army. When I returned home a few years later he wanted to know where he could find a replacement for the knife as he had lost the first on a job site. It had impressed him so much that he had been waiting all that time to ask me about it.

While I thankfully never had any reason to use that first knife as a weapon, the folder still made a very tough, practical cutting tool for EDC. At 5/16 inches thick, the SOG SlimJims frames are actually even thinner than the old 7/16-inch thick black panthers. Since the SOG’s versions arrived for evaluation, I have been carrying one in the inside breast pocket of a travel vest I like to wear while working or hiking in the woods. It has proven to be a very easy knife to forget is even there until you need it, and makes a great backup to any heavier duty cutting tools I might be using.

Of course, by adding an assisted opening mechanism, thumb pegs and carry clip, SOG has turned this style of knife into a much more tactical animal. Like many assisted openers, the SlimJims are equipped with a safety, in this case, a small sliding projection behind the lock release that can be used to both hold the knife open or closed. One word, though, about that safety, use it if you are carrying the folder in a front pocket. I found out the hard way that without the safety on, the knife can open in your pocket and, no big surprise here, cut you unexpectedly. Well, I’ve been cut before and probably will be again in the future. On the plus side, SOG spring assist certainly snaps the blade open with authority and it never failed to lock into battery.

As with any EDC type folder, most of my field-testing consisted of the usual package opening, sandwich cutting, and apple slicing we all do. The knives also saw a fair amount of use harvesting various garden crops, zucchini, cucumbers, peppers, Thai corn, bok choy, Swiss chard and onions among other things. At one point my wife noticed that the sugar pea vines we had assumed were past their prime mid-summer were resprouting and producing fresh pods mid-fall. Wanting to make things easier for future harvests she asked if I had a knife on me (funny question right?) as she wanted to cut the old vines away from the new. Out came the long SlimJim and a few minutes later a 20-foot row of vines were cut off near the ground. The thin, sharp blade was perfect for this kind of practical use.

While obviously you need to clean the pivot area and spring out on most knives after cutting soft, moist plant materials, the only other problem I had was that all those cut-outs SOG has added to the handle frame for appearance tend to collect “gunk.” Given it was a stainless steel knife, it was no real problem to just stick it under a tap and wash the residual vegetable pulp out.

An EDC knife needs to be available for any cutting chores that come up during the day, and sometimes that means borderline abuse. In my case, it involved repairing a sidewalk that I had to break out to, in turn, repair a broken water line. Not being a big enough job to call a ready-mix truck, I bought a pickup load of paper premixed cement sacks, each of which needed to be cut open. The large, bead blast finish SlimJim handled the task without problem but slicing through sand and cement are not exactly conducive to long edge life. Dull or not, the knife managed to slice open all the sacks without maintenance.

Normally, I make a point of saying if it takes more than two or three minutes to resharpen any knife, you are doing something wrong. But there are times when an edge is way beyond a quick touch up and this was one of them. Starting with a coarse Norton India benchstone, followed by a Fine India and finishing on a diamond-coated butcher’s steel, I spent around 30 minutes repairing the edge of the SlimJim. When I finished it once again easily shaved hair off my arm.

I’m never a person to rely on just one knife when I’m working anywhere more than a few feet from my home. It is also true that the same flat profile that makes the SlimJims such a joy to carry, tends to make them a little less comfortable to use during really heavy cutting. The obvious answer is for me to carry the knives as back-up and for when an ultra-thin, sharp edge is more important than brute strength. For those working in a more urban environment that isn’t going to involve sharpening stakes, cutting heavy rope, hose, webbing, pumpkin vines, sweet corn stalks and other homestead tasks, the SlimJims should be very close to perfect as EDC’s. And if push comes to shove some dark night on a deserted street, they will still hold their own as defensive weapons. SOG has a pair of real winners in these new models. 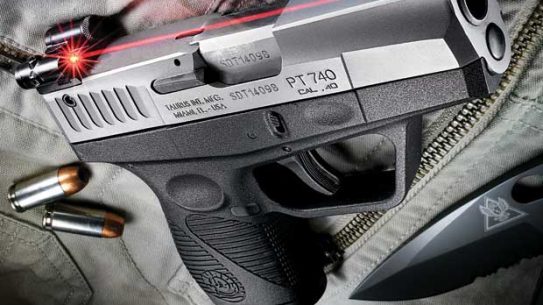 STRONG AS A BULL

Chiappa Little Badger: A Quick Look at the Folding, Break-Open...