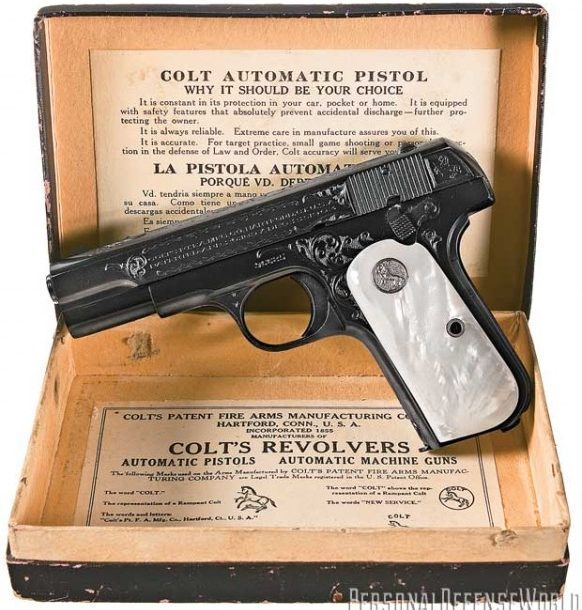 1 of 3
PP13 PDW Colt Hammerless 3
Only 235 Hammerless pistols in .380 ACP were factory engraved. This example with its original box is also fitted with pearl grips. 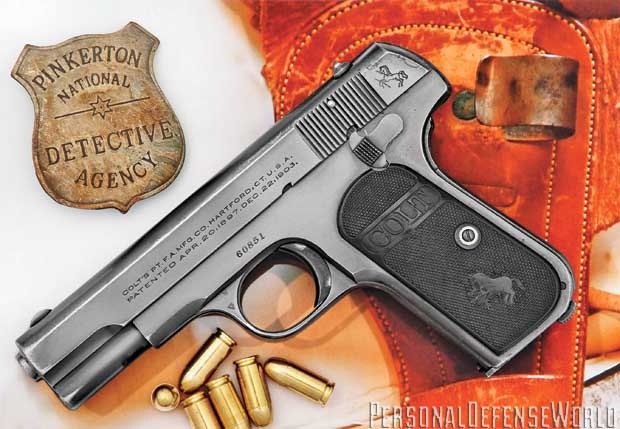 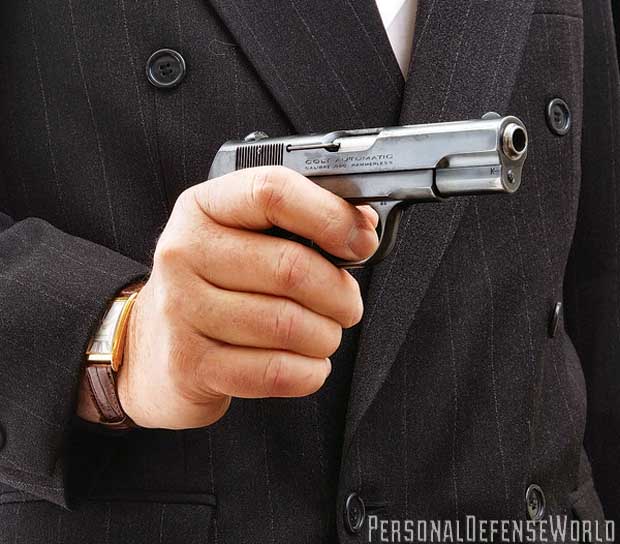 3 of 3
Colt Hammerless 2_phatchjpeg copy
“Pocket pistol” was a literal interpretation in the 1900s, and the Colt Models 1903 and 1908 easily fit in a trouser or jacket pocket. 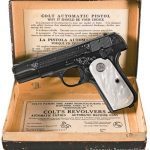 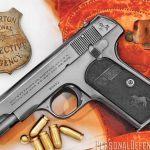 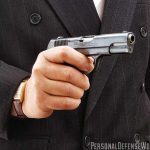 While we regard the .380 ACP pocket pistol as a contemporary 21st century design, the very first .380 hammerless pocket pistol was manufactured in 1908 by Colt’s Manufacturing of Hartford, Connecticut. And, as with so many legendary American rifles, shotguns and pistols, it was designed by John Moses Browning. The actual concept of the semi-auto pocket pistol began with Browning in the late 19th century and his first .380 design (and its .32 ACP Model 1903 predecessor) are both stamped with the patent date of April 20, 1897. Yes, the semi-auto pocket pistol was invented in the 19th century!

Throughout the mid-19th and early 20th centuries, John Browning was the most prolific arms designer in America, and perhaps the world. While much of his work was for Winchester—a litany of famous repeating rifles and shotguns—Browning’s work for Colt is no less historic. His name can be found on the design for the most famous semi-auto ever built, the Colt Model 1911. But years before the great .45 ACP, his advances in handgun design, and the cartridges they fired, were establishing new standards on both sides of the Atlantic.

His work with “self-loading pistols” began in 1889. Although his first semi-auto pistol was a bit awkward in its operation, it established the basic platform for nearly all of the pistols that would follow in the early 20th century. Fabrique Nationale (FN) made many of Browning’s early semi-auto designs, including the celebrated FN Model 1900 chambered in 7.65mm. Not long after it was introduced, Browning designed a hammerless model for Colt chambered in .32 ACP, the American equivalent of the 7.65mm Browning cartridge designed in 1897.

Browning and W.M. Thomas of the Union Metallic Cartridge Company invented the .380 ACP cartridge in 1908, providing a larger caliber for the Colt Hammerless pocket pistol. The .380 Hammerless was a virtual twin to the .32 ACP and was made by re-chambering the .32 and reducing the barrel length from 4 inches to 3.75 inches. Later .32 ACP models were also built with the shorter barrel.

The .380 was the most powerful small-caliber round available in an American-made semi-auto pocket pistol, even with the modest handicap of carrying only seven rounds in the magazine, instead of eight like the .32 ACP. Both models were exceptionally compact for the early 1900s, measuring just 6.75 inches in overall length, 4.5 inches in height, 1 inch in width, and weighing 24 ounces empty. Either could be easily secreted in a suit jacket pocket, trouser pocket or simply tucked into the waistband. “Pocket pistol” became a literal definition.

The 1903 and 1908 actually had internal hammers but were designated “Hammerless” because there were no external hammers to manually cock.

Browning incorporated one of his favorite features in the design: a grip-activated safety. The guns could not be discharged unless firmly grasped in the user’s hand. This design would appear again on the 1908 Vest Pocket Model (.25 ACP) and on the Model 1911. As an additional safety feature, a Tansley-style magazine safety disconnector was added to .32 ACP models in 1926 and .380 models around 1928.

Both Colt models were discontinued in 1945 but remained in popular use well into the late 20th century. The .380 earned a reputation as the handgun of choice for government agents (the .32 ACP was issued to OSS officers during WWII), private detectives, lawmen working what remained of the American West in the early 20th century, and not surprisingly, some of the most notorious outlaws of the 1920s and ’30s, including John Dillinger. In 1934, the FBI’s Most Wanted had a Colt .380 in his trouser pocket the night he was cornered and gunned down by FBI agents outside the Biograph Theater in Chicago. It is believed that Al Capone also carried a Colt .380, as did Clyde Barrow and Bonnie Parker. Among the less infamous of Colt .380 owners was General George S. Patton, whose issued General Officers gun was somewhat upstaged by his famous pair of ivory-stocked Colt Single Action .45 revolvers.

Colt’s pocket automatics were among the armsmaker’s most popular and successful 20th century models. Though more than a century old, the .32 ACP and .380 ACP pocket pistols remain among the most historically significant of American semi-autos, and remind us once more that nothing is new. Yes, smaller and lighter, but not new. 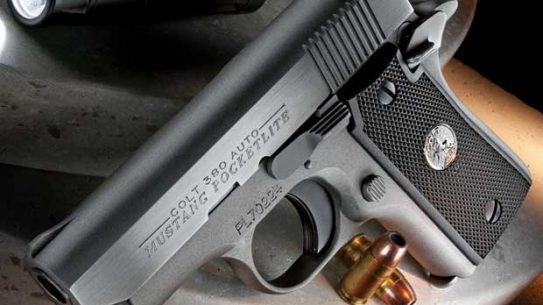 While we regard the .380 ACP pocket pistol as a contemporary 21st century design,…