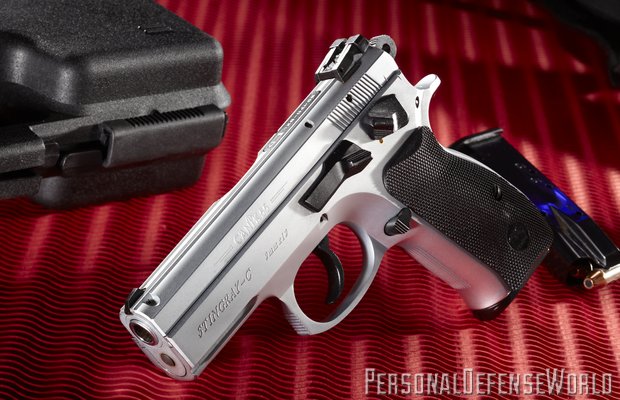 1 of 8
CH_Century Stingray C_RS 2840_phatchfinal
Built strong for hard use, ambidextrous by design and carrying a 13+1 capacity of 9mm ammo, the Stingray-C is ready to accomplish any task it’s given. 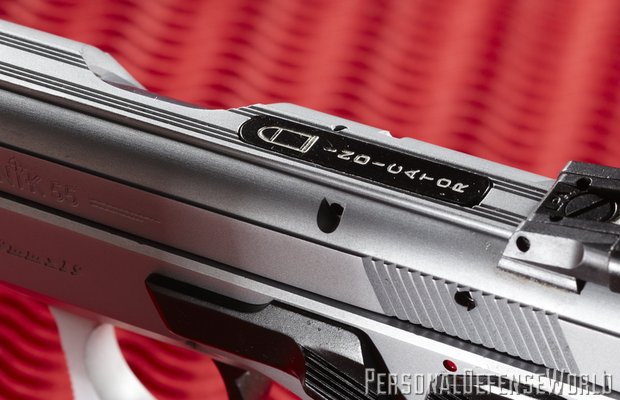 2 of 8
INDICATOR_phatchfinal
The top of the Stingray-C’s slide is adorned with serrations to reduce glare and a large, hard-to-miss loaded-chamber indicator that tilts upwards when a round is in the chamber. 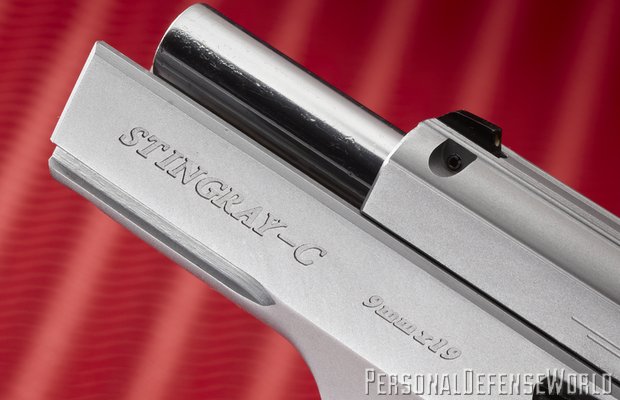 3 of 8
BARREL_phatchfinal
For greater accuracy, the pistol is equipped with a 3.5-inch, hammer-forged barrel made from chrome-moly-vanadium 1210 steel. 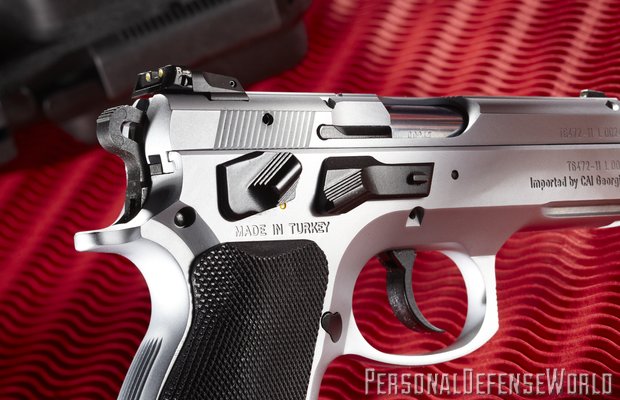 4 of 8
AMBI CONTROLS 1_phatchfinal
Canik55 designed the Stingray-C with ambidextrous safety and slide-release levers on both sides of the frame, making it easier to operate with either hand—a good thing if your strong hand is incapacited. 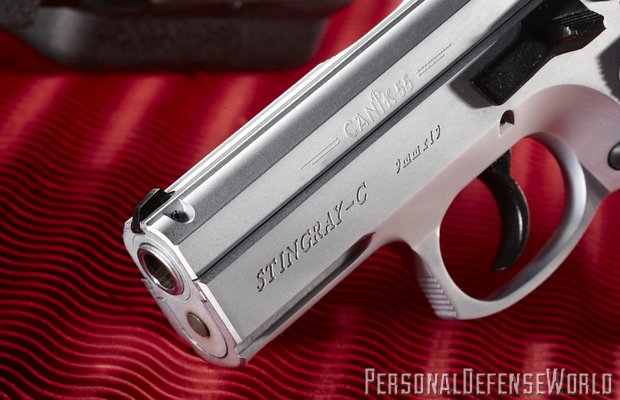 5 of 8
SLIDE_phatchfinal
The trigger pull is simliar to a CZ 75’s, with a 6-pound weight in single-action mode and 13 pounds in double action. Also note the extended magazine release, which can be reversed. 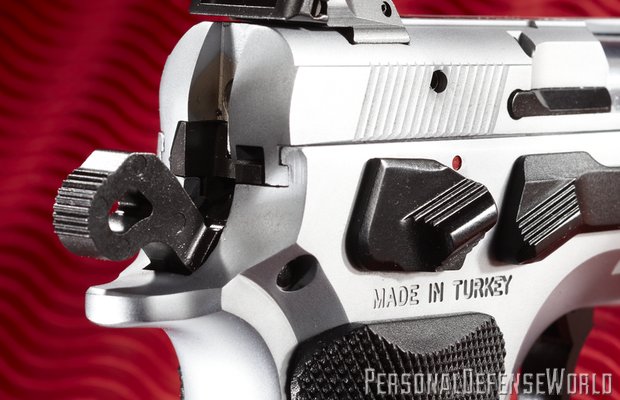 6 of 8
HAMMER_phatchfinal
Above the serrated, skeletonized hammer, the Turkish-made Stingray-C features a black, LPA rear sight that stands out against the matte-silver slide and makes targeting an easy task. 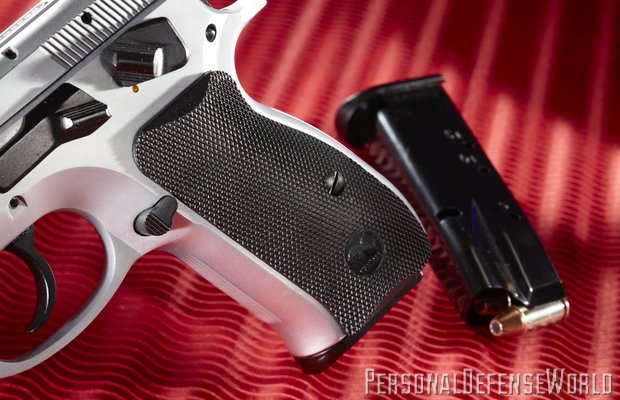 7 of 8
GRIP_phatchfinal
The black, synthetic grip panels are finely checkered, allowing users to maintain a sure grip for greater shot-to-shot consistency. 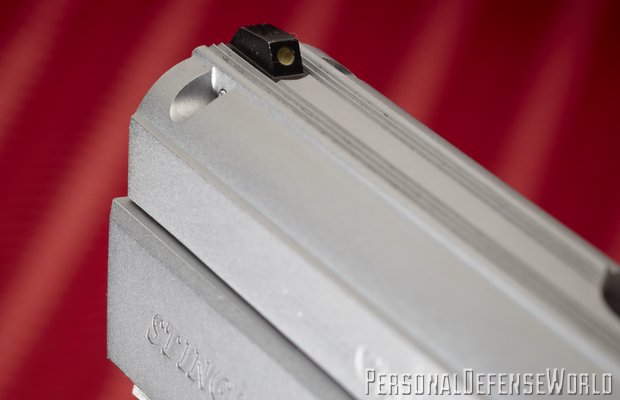 8 of 8
FRONT SIGHT_phatchfinal
The blade front sight, dovetailed into the slide and held in place with a roll pin, pairs nicely with the rear sight for fast, three-dot targeting. 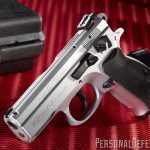 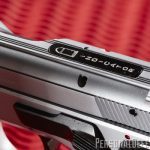 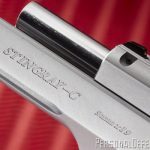 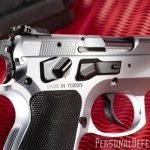 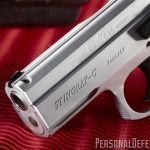 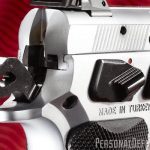 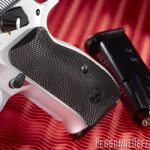 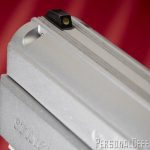 Samsun, Turkey, a port city on the Black Sea, boasts a rich history that goes back thousands of years. The city was even mentioned in Homer’s Iliad. In more modern times, Samsun has earned attention for being one of the Anatolian Tigers, cities that have had impressive economic growth since the 1980s. One of Samsun’s success stories is handgun manufacturer Canik55.

At an industry trade show earlier this year, Century International Arms invited me to see the new line of Canik55 pistols they would begin importing, starting with the Stingray-C. Canik55 (pronounced “cha-nick”) has a reputation for producing rugged pistols based on the tried-and-true CZ design. I am a huge fan of CZ-type pistols, and my brief look at the Stingray-C in the Century Arms booth made me eager to get a sample for testing.

One of my favorite range guns is a 1990 vintage CZ, and over the years I’ve acquired quite a few vintage CZs and CZ clones. The fact that there is such a booming market in CZ clones is due to an oddity of Cold War politics. Back in 1975, when František Koucký designed the CZ 75 pistol, Czechoslovakia was behind the Iron Curtain. The Czechs decided the new pistol design was a matter of national security, so they classified its patents as secret. But the Czechs couldn’t apply for international patent protection without disclosing the engineering data for the design, which they refused to do. As a result, the CZ 75 was unprotected abroad, and companies all over the world reverse-engineered the design and began turning out high-quality CZ 75 clones. I’ve shot some very good CZ clones, and my brief look at the Stingray-C led me to think this would be one of the good ones. 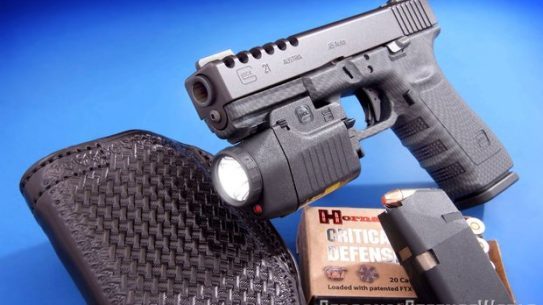 Samsun, Turkey, a port city on the Black Sea, boasts a rich history that…