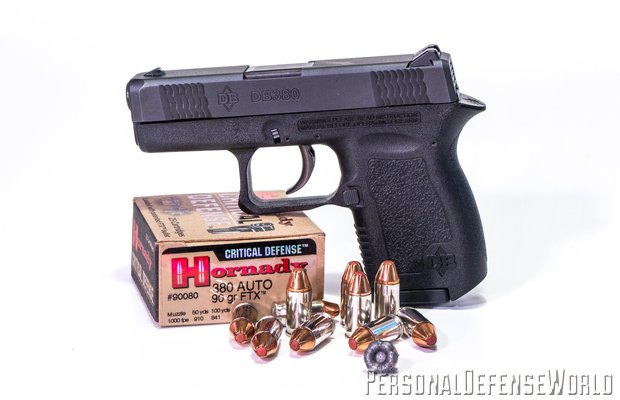 1 of 3
HCD_06_phatchfinal
Hornady Critical Defense ammunition has been ballistically engineered to deliver optimum performance from compact handguns like the Diamondback DB380 and other short-barreled manstoppers. 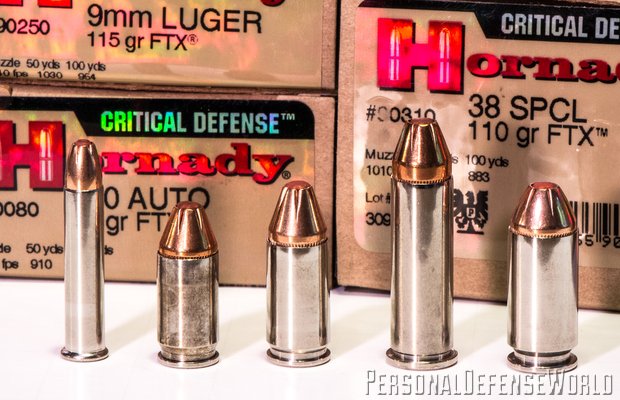 2 of 3
HCD_05_phatchfinal
Hornady offers Critical Defense ammunition in a wide range of cartridges that are commonly used by civilians carrying compact handguns. From left to right: .22 WMR, .380 ACP, 9mm, .38 Special and .40. 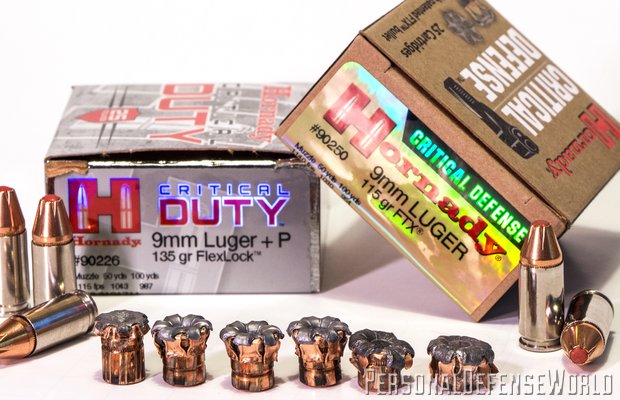 3 of 3
HCD_012_phatchfinal
Rounds from the Critical Defense and Duty lines expand well and are designed to penetrate effectively depending on the size of the handgun used—compact and full-sized, respectively. 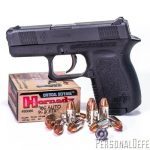 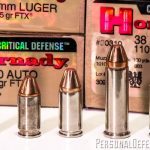 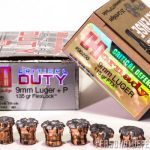 For the 9mm Luger, there are more than a hundred different defensive handgun loads to choose from. Not only are there a lot of different loads, but those loads are also manufactured by more than 20 different companies. So how are you supposed to pick the one that is right for you? Some companies make it easier than others.

In order to decide which load best suits your needs, you need to understand two things. First, you need to have a basic working knowledge of defensive-handgun terminal ballistics. Second, you need to know how Critical Defense and Critical Duty loads differ in terms of terminal performance.

Let’s start with a brief explanation of terminal performance as it relates to defensive handguns. Defensive handguns are handicapped by low velocity. This means that, in most cases, tissue damage is limited to a hole equal in size to the bullet’s diameter and the depth it penetrates. Bullets that deform during penetration and develop a wide frontal diameter make holes that are bigger around. But the wider the bullet expands, the less it penetrates because it has more resistance, which causes it to slow down faster.

Finding the right balance between expansion and penetration is critical, and Hornady sought to maximize that balance with its Critical Defense line of ammunition. Defensive-handgun ammunition can be loaded hot—to +P pressures—but the tradeoff is exaggerated recoil. And Hornady realized that many of the most popular defensive handguns are very compact and have short barrels. So Hornady engineered Critical Defense ammunition to offer a good balance of terminal performance but with moderate recoil and an assurance that the loads would perform—expand—from short-barreled handguns.

By using special powders and, in many cases, light-for-the-caliber bullets, Hornady found a balance of performance for cartridges from the little .22 Magnum all the way up to .45 Colt. When shot into blocks of 10 percent ordnance gelatin, you can expect all of Hornady’s Critical Defense loads to penetrate between 10 and 12 inches—even after passing through clothing. The result is ammunition designed to be used in the many popular compact and concealable handguns available today—the Critical Defense line.

For 2012, Hornady took the bullet technology they developed for their Critical Defense line of ammunition and enhanced it by mechanically locking the core of the bullet to the jacket. From the outside, this new bullet, the FlexLock, looks just like the bullet used in Critical Defense ammunition, the FlexTip. However, by locking the core to the jacket in the FlexLock bullet, Hornady was able to drive heavier bullets faster, and those bullets are capable of staying together better when passing through tough intermediate barriers like wallboard, sheet steel and auto glass. The result was Critical Duty ammo.

Why are these characteristics important? Well, when cops get in shootouts with bad guys, the bad guys often like to hide behind things. With the new FlexLock bullet loaded in Hornady’s new Critical Duty line of ammo, cops can expect the bullet to deliver a good balance of terminal performance, even if they have to shoot at someone who is trying to run them over with a ’76 Ford Pinto. The ability to shoot through barriers like these and still deliver good terminal performance is something the FBI has been mandating for a long time. In fact, before any ammunition is issued to an FBI agent, it first has to pass a rigid test that exposes bullets to the types of barriers. Additionally, meeting the FBI standard is a prerequisite many other law enforcement agencies demand before they will select duty ammunition. Knowing this, Hornady designed the Critical Duty line of ammunition to specifically meet the FBI standard. As a result, Critical Duty loads were designed to be fired from duty-sized handguns. So, if your defensive handgun leans toward the full-sized realm of the market, Critical Duty ammo would be an excellent choice.

According to Hornady, you can expect any of the current three Critical Duty loads to penetrate no less than 12 inches when fired into a block of ordnance gelatin, even after passing through heavy clothing, wallboard, two pieces of sheet steel or the toughest test barrier—automotive glass.
For the citizen looking to purchase a defensive load for a full-sized handgun, Critical Duty might be the best option of the two lines. Though it is not as common in situations where citizens have to shoot to defend their lives, it’s still plausible that they may have to shoot through a barrier to get a bullet into a bad guy. However, if you are carrying a subcompact 9mm or .40 S&W, you can expect the recoil from Critical Duty loads to be stiffer.

For example, the 9mm Critical Defense load uses a 115-grain bullet and has an advertised velocity of 1,140 feet per second (fps). According to the Sierra Infinity program, this load will generate a recoil impulse of about 6.3 foot-pounds of energy out of a 16-ounce Kahr PM9. On the other hand, the 135-grain +P Critical Duty load has an advertised velocity of 1,110 fps and will have a recoil impulse of around 8.1 foot-pounds. That’s almost a 30 percent increase in felt recoil. Though it’s up to you, that is possibly enough to make the little Kahr pistol uncontrollable and uncomfortable to shoot.

There is indeed a method to the madness at Hornady. They do not offer two Critical loads to confuse you—they offer two Critical loads for two specifically different critical applications. If you are carrying a compact handgun for personal protection, their Critical Defense load is probably the best choice. If you are a cop, security guard, or even a civilian who carries a full- or duty-sized pistol, and, if you want the ability to shoot through barriers, then Critical Duty ammo is likely the best option available. Based on the testing I’ve conducted with both Critical Defense and Critical Duty loads, I believe you can expect, on average, about 25 percent deeper penetration with Critical Duty and about 10 percent more expansion with Critical Defense.

I really like Hornady’s approach. They named their products to specifically address the proper applications for their ammunition. Let’s give Hornady some credit for making it easier for shooters—beginners and experts—to find the right defensive-handgun ammunition to meet their needs. For more information, visit hornady.com or call 800-338-3220. 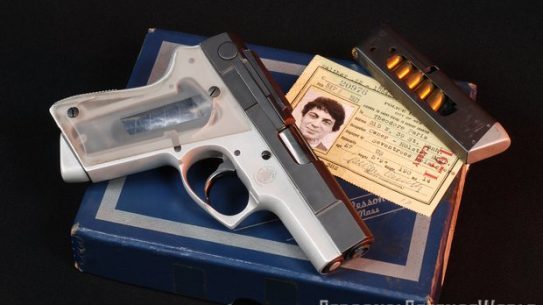 For the 9mm Luger, there are more than a hundred different defensive handgun loads…