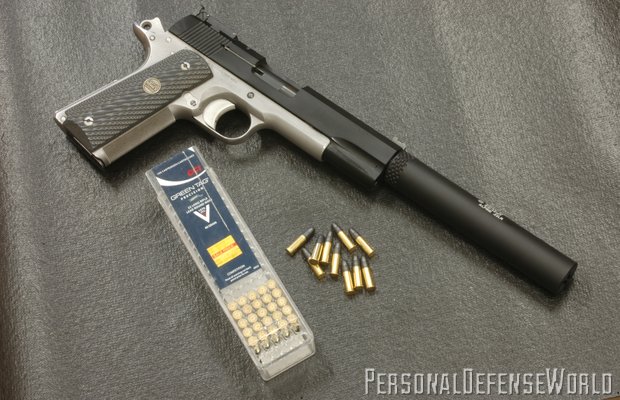 1 of 5
B-Gemtech Alpine 01b-FROM AUTHOR_phatchfinal
Gemtech’s Alpine is a user-serviceable .22 LR suppressor with a “dry” sound reduction rating of 38 decibels. Shown mounted on a Novak Colt 1911 with a Marvel Precision .22 Conversion. 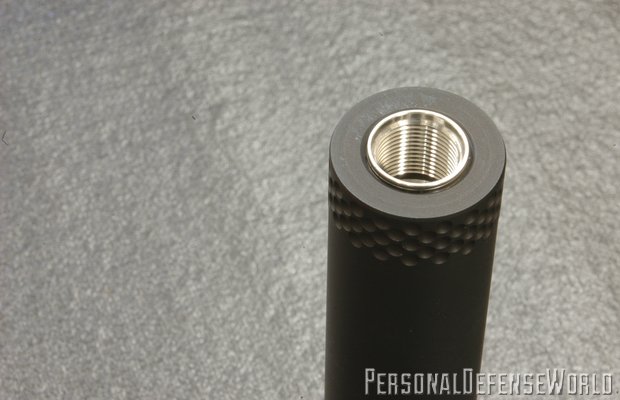 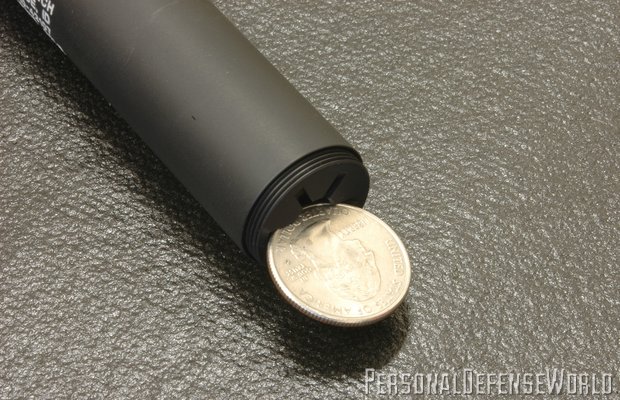 3 of 5
USING COIN 2-Author Shot_phatchfinal
With the Alpine’s end cap unscrewed, the baffle stack can be removed from the front of the “can” for cleaning – a major advantage 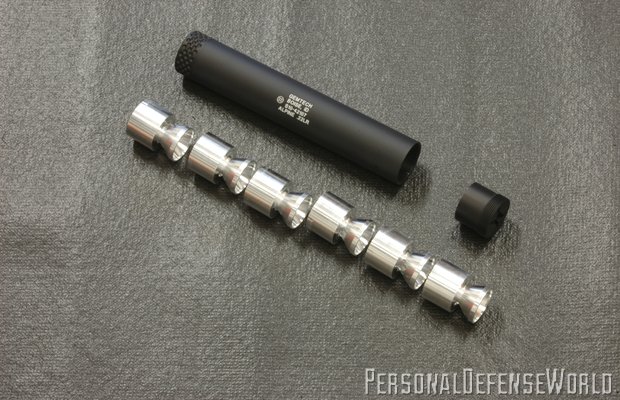 4 of 5
DISASSEMBLY-Author shot_phatchfinal
With the exception of the rear blast baffle, all of the Alpine’s baffles can be installed in any order and in any orientation. 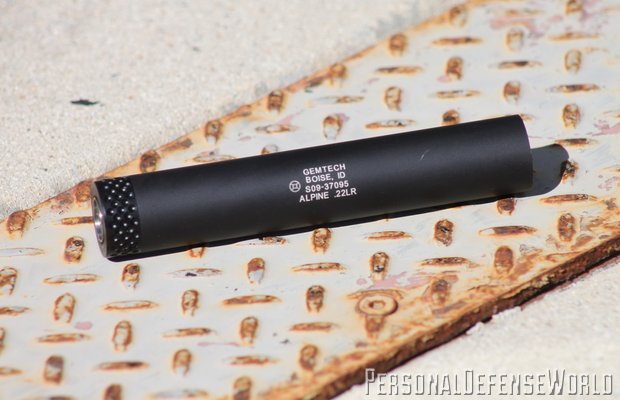 5 of 5
Gemtech photo 3_phatchfinal
All of the rounds tested through the Alpine (virtually all of which were subsonic) were very quiet – well below the level where hearing protection is required. The Colibri ammunition was almost silent. 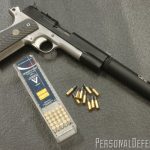 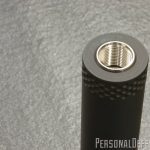 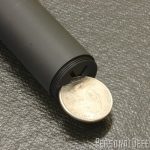 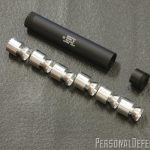 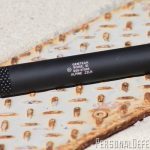 The suppressor market has exploded in the past few years, with a dizzying number of new companies and new models being introduced. This is because of a changing perception in the shooting world—suppressors are considered much more benign than their Hollywood depictions—and inflation, which has reduced the financial sting of the $200 transfer fee.

As more people buy suppressors (especially the muzzle-mounted .22 rimfire “cans” that represent the bread and butter of suppressors), increasing use leads to a demand for newer features—in this case, the ability to disassemble them. While I’ve generally had good results with sealed cans, .22 ammo is dirty as sin, and, coupled with the tendency of soft .22 bullets to hiss and spit little pieces of lead into suppressors, it makes sense to be able to one down for maintenance. Otherwise, the standard protocol is to regularly weigh the suppressor and send it in for service when the scale tells you there’s an unacceptable amount of lead deposited in the baffles.

Enter Gemtech, which has offered suppressors of all sizes and calibers for years. Alongside their popular .22 LR Outback and Outback II models, Gemtech’s new Alpine is a thread-on .22 LR suppressor that can be quickly and easily disassembled for cleaning. Running about a half-inch longer than the Outback, the all-aluminum Alpine weighs in at 3.7 ounces, has a 1-inch outside diameter and an advertised 38 decibels of sound suppression when shot dry.

Firearms make noise in several different ways, but the two loudest things are the sonic crack of the bullet breaking the sound barrier and the report of the gases produced by the burning gunpowder as it exits the barrel behind the bullet. Preventing the first comes down to selecting ammo that travels slower than the speed of sound, which is about 1,100 feet per second (fps). This is easy with a round like the relatively slow-moving 147-grain 9mm, tougher with a .223, and manageable with the .22 LR, which comes in either hypersonic or subsonic versions.

Preventing the sound of the escaping gas is where the suppressor comes in. Suppressors trap the hot, fast-moving combustion gas until it cools, usually by encircling the path of the bullet with a series of chambers commonly called baffles. Introducing a liquid into the suppressor also helps cool the gas, making it quieter still. While the Alpine can be shot “wet,” like the Outback, its suppression is measured dry and is quite good even without the addition of a coolant.

The rear exterior of the Alpine’s body has a series of machined-in dimples, something along the lines of golf ball dimples with sharp edges. They aren’t simply ornamental—they give your fingers some texture to hang onto when you’re screwing the suppressor on or off. This is especially helpful after a long session of shooting, since cans tend to get pretty hot, and you don’t exactly want to wrap your entire palm around that smooth cylinder and squeeze tight to unscrew it.

The Alpine mounts to the muzzle with a titanium insert that has 1/2-28 threading, the standard thread pattern for .22 cans. The titanium insert also reduce the chance of cross-threading, which can occur with softer aluminum threads. Contained within the suppressor tube is a blast baffle, located just forward of the threads. Unlike the other six baffles, which each have an integrated spacer, the blast baffle has none. Also, the other six baffles can be installed in any order, but the blast baffle must be placed at the rear.

The good folks at Gemtech understand that special tools are easily misplaced, so they opted to do away with that requirement for the Alpine. The threaded cap on the muzzle end, which is used to take down the can, has a series of three semicircular cuts across it, into which a coin will neatly fit. Slip it into place—they recommend a nickel, but I used a quarter—twist and the cap is off. They recommend then using a 0.38-inch wood dowel to push the complete baffle stack out from the rear. For the less sophisticated among us, turning it upside down will cause to the baffles to drop out into your hand. Similarly, they suggest using a 0.25-inch dowel to reinstall the baffles, though they can be installed one at a time.

My test Alpine was delivered to Atlanta’s G-Man Weaponry, a Class II Series 7 dealer. I was able to test the Alpine by firing 200 rounds of mixed .22 LR ammo, most of which was subsonic. For a test gun, I used my well-traveled Novak Colt Government Model .45 with a .22 conversion kit, the Marvel Precision Unit 2 with a threaded barrel, installed. The Marvel unit is astoundingly accurate and, when coupled with a suppressor, has proven to be a superb way to get cheap, high-volume practice with your carry gun without bothering the neighbors.

The Alpine screwed easily into place and performed its intended task of turning the gun’s sound from a bang to a pop. Often, suppressors will have what’s called a “first-round pop,” where the first round fired through the suppressor is noticeably louder than subsequent shots, altering the pressure and temperature inside the can. While minimal, the first shot through the Alpine was slightly louder.

To test the Alpine, I used Wolf Performance Ammunition’s surprisingly accurate Match Target ammo, as well as German Standard Plus, CCI Green Tag (what Gemtech used to rate the Alpine’s decibel reduction), Federal Gold Medal and RWS Rifle Match, which, to the naked ear, seemed to be the quietest. One, however, was quieter: Aguila’s Colibri, essentially a .22 pellet propelled by only a primer. Quiet in an unsuppressed firearm, the Colibri is so quiet with a suppressor mounted that you can often hear the hammer fall.

I also fired a few rounds of Gemtech’s new Silencer Subsonic ammo. Specifically designed for suppressor use, this load features a slightly heavier 42-grain projectile that flies at 1,020 fps and clean-burning powder to reduce the fouling effect of most .22 ammo, which is notoriously dirty-burning.

All of the rounds tested were quiet, well below the point of being uncomfortable to shoot without hearing protection. Just out of curiosity, I shot 100 rounds of CCI’s Subsonic HP through the Alpine and an Outback II, swapping the suppressors back and forth between magazines. Although at times one would sound quieter than the other, in the final analysis I could tell no discernible difference between the two.

I have had a Gemtech Outback for about eight years now, and have been very pleased with it. To its admirable performance, the Alpine has added the ability to be serviced by the end-user without needing to send it back to the factory for cleaning. In essence, the Alpine is well thought out, easy to take apart and reassemble without tools, and should offer many years of reliable, quiet service. For more information, visit gem-tech.com or call 208-939-7222. 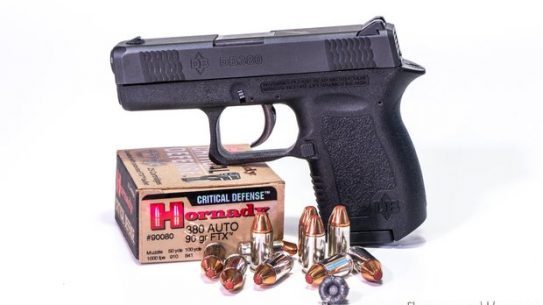 The suppressor market has exploded in the past few years, with a dizzying number…