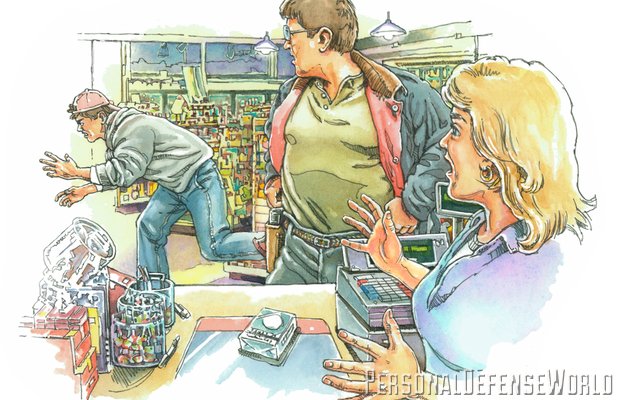 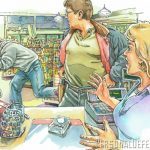 In 2006, I was living in an apartment in the center of a small rural town. One night at about 11:00pm, I found myself out of cigarettes, which, as many smokers know, led to an overwhelming urge to run to the store and pick some up. It was a nice night, and rather than drive, I decided to take the 10-minute walk to a local gas station. It was just a few-hundred yards’ walk down an alley and across the highway. Naturally, the alley was dark and the area was not without crime, so I brought with me a state-licensed 9mm CCW handgun. Since it was late fall, I kept the pistol concealed nicely underneath my heavy jacket.

The walk down the alley was uneventful. I soon found myself approaching the well-lit comfort of the convenience store. There was only one other customer in the store; he promptly paid for his gas and left. I took my turn at the counter and selected my brand of cigarettes when the bell chimed and two males came in. There was a third outside, standing next to the door and facing the parking lot.

One of the two men that came inside headed to the restrooms, pulling open the doors to both of the restrooms and going into neither. He then walked to the backdoor and just stood there, looking out. The second man stood a few feet behind me, waiting for his turn at the counter. I instantly knew the place was about to get robbed. I looked at the girl behind the counter. Her eyes widened—she knew, too.

I had no idea who the girl was, but I broke into conversation with her: “How’s your brother doing? He’s still going to school for engineering right?”

She gave me a puzzled look, and then recognition splashed over her face. She could tell I was trying to stall for time. She played along, “Oh, yeah. He’s got a full-ride scholarship and is going back this spring.”

“That’s great,” I continued. “How’s your dad been doing? He’s still working for the steel mill?”
She replied, “Yep. He’s been there almost 10 years now. They made him the division safety officer at the central office.”

I nodded and turned to see if the man was still standing there. I was praying that they would get nervous and bail out or that another customer would come along. No such luck. The man behind me gave me a menacing look, then nodded to the door as if to say, “It’s time for you to leave.” I responded by lifting my coat and adjusting my belt, flashing him the 9mm on my hip. His eyes bulged. He turned and shouted something to his partners. Then the man at the rear door sprinted out and disappeared around the corner, followed closely by the second thug.

I spun to check the front sidewalk and saw the lookout had gone as well. I told the girl to call the police as I went out to make sure they weren’t regrouping behind the store or laying an ambush for me. I moved along the side of the building. Cautiously, I turned the corner. I saw no one. I returned to the store.

A few minutes later, a squad car pulled up. The cashier and I explained the situation to the police officer. I showed him my concealed carry license and advised him that I was armed. He was very courteous, and after checking that my driver’s license corresponded with the CCL info, he didn’t ask about my weapon again. He put out an APB regarding the trio. In a few minutes, police cars were racing up and down the side streets. I don’t know if they ever captured the trio, but I’m confident my CCW saved a business from being robbed and kept a young girl from getting physically and emotionally hurt.

I am a real estate agent in a remote part of California where towns of 3,000 people may cover 50 square miles. Many here have “isolationist” mentalities or like to be left alone.

One morning after rabbit hunting, I stopped in a neighborhood of old mobile homes to check a property for one of my clients. As I was moving slowly up the rutted dirt road, I received seven phone calls on my cell in less than five minutes. I pulled over to the side of the road to talk, and as I was discussing some title issues on a property with a client, this rough-looking guy came out, screaming at me to get out of his neighborhood!

I waved to him, letting him know I heard him and was on the phone. He closed the distance, crossing the street quickly, and put a double-barreled .22 Magnum derringer to my forehead. He continued screaming at me, saying I was making his dogs bark. The client was screaming into my cell phone because she was frightened.
The training I have taken in CCW classes went into gear immediately. I got very cold and looked him in the eye, saying he was going to get a lot more trouble if he kept the gun pointed at my head. He continued screaming at me, telling me to leave. I thought about the 9mm in my belt and the two shotguns and .30-06 next to me in the pickup. Did I need to be a hero this time by hitting the power up button on the driver’s window, hitting the gas quickly and getting out to accost him or should I just get out of Dodge safely? I chose the latter.

As I slowly eased the pickup out into the road, he turned and walked back to his gate. I called 911 and drove up the street. The local sheriff’s office took the call and a deputy interviewed me over the phone since I wasn’t going to press charges—just alert them to a druggy-looking guy with a gun and high fences around his property. The deputy ran my background check and found I had a valid CCW license and am a volunteer with the local juvenile probation department. She asked why I didn’t draw my carry weapon when this occurred and I told her about the training I have taken and the thought of paying for a legal defense kept me from escalating the situation.

For several days after, I ran the entire scenario through my mind to decide if I did the right thing. I am convinced I did the right thing, but I was not doing the right thing when the situation occurred. Here is what I learned from this experience: 1) Don’t pull over to talk in a rough looking neighborhood; 2) Always pay attention to your surroundings; 3) When someone who appears violent or unbalanced is yelling at you, stop what you are doing and pay even closer attention; 4) Have your carry weapon ready and a defense or retreat plan working instead of getting caught defensibly flat-footed. The training went into effect after the threat occurred, but it should have gone into effect when the punk came through his gate. I intend to get some more education in situational awareness and defensive training before this happens again. 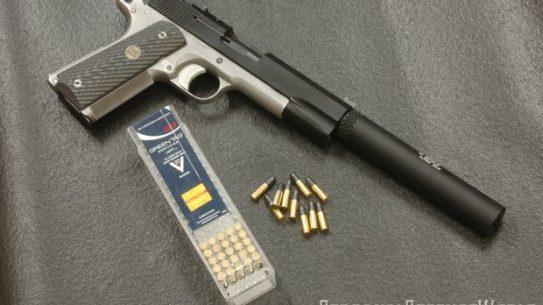 LATE-NIGHT HOLDUP In 2006, I was living in an apartment in the center of…