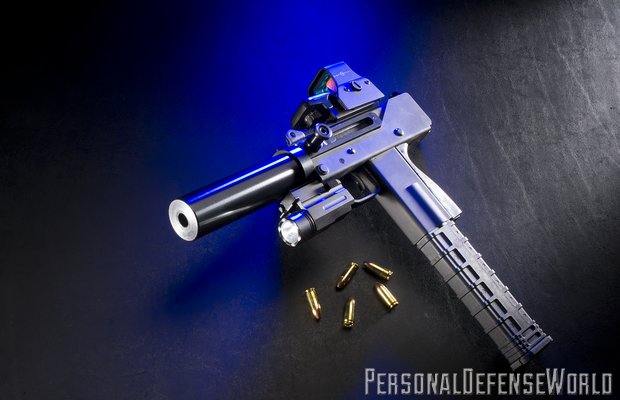 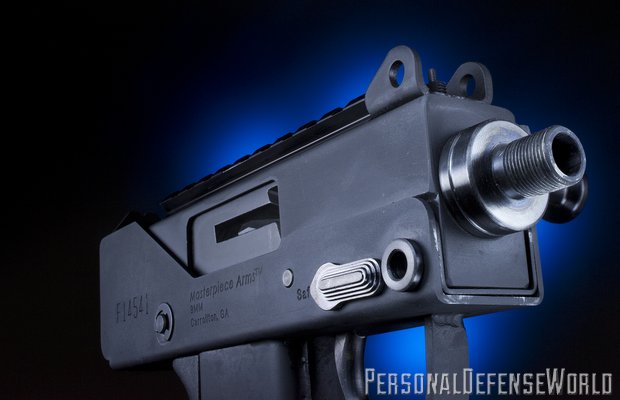 2 of 8
LEFT SIDE_phatchfinal
MasterPiece Arms carries on the MAC-10’s understated aesthetics while enhancing it with a 3.5-inch threaded barrel and side-cocking, closed-bolt operation. 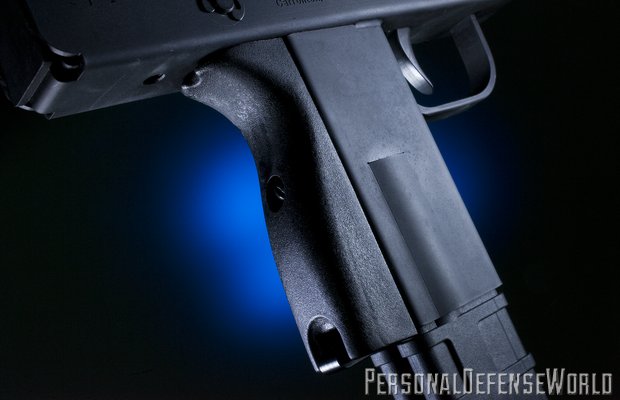 3 of 8
GRIP_phatchfinal
The MPA930 has a curved, synthetic backstrap for a better grip and to help absorb recoil. Note the magazine release lever on the bottom. 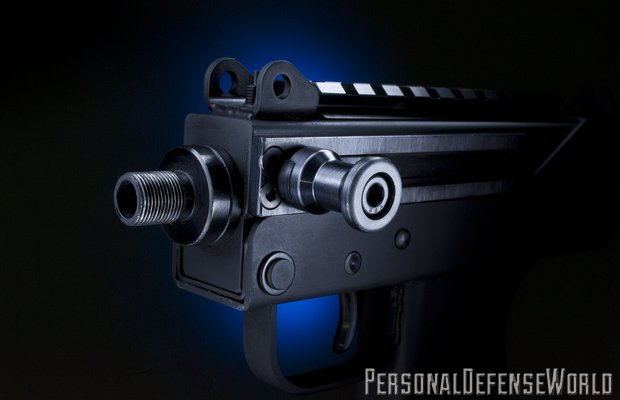 4 of 8
COCKING HANDLE_phatchfinal
The protected, threaded front sight is easy to see yet remains out of the way when optics like the Sightmark Ultra Shot QD red dot are mounted. 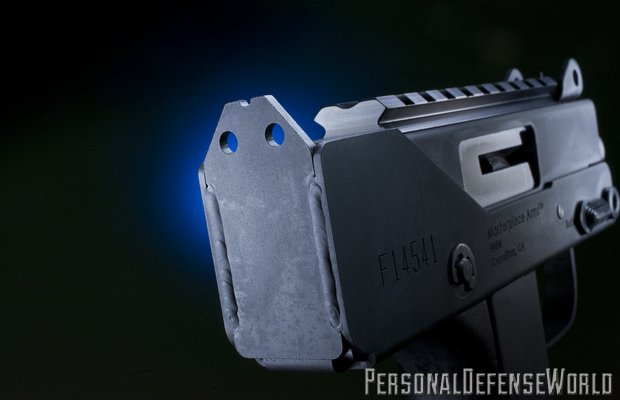 5 of 8
REAR_phatchfinal
The rear of the receiver, slimmer than the original MAC-10, features a notched rear sight with loops for a sling. Users can mount optics to the top rail. 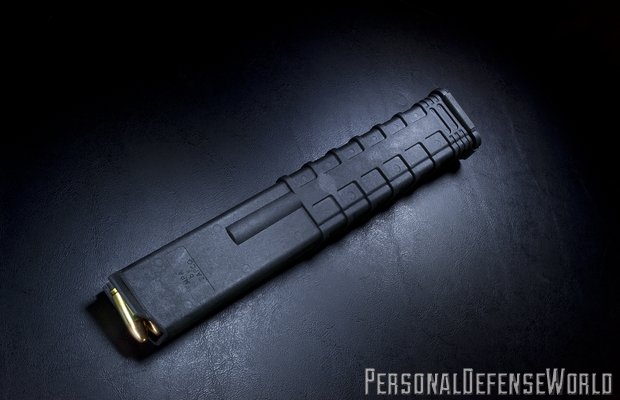 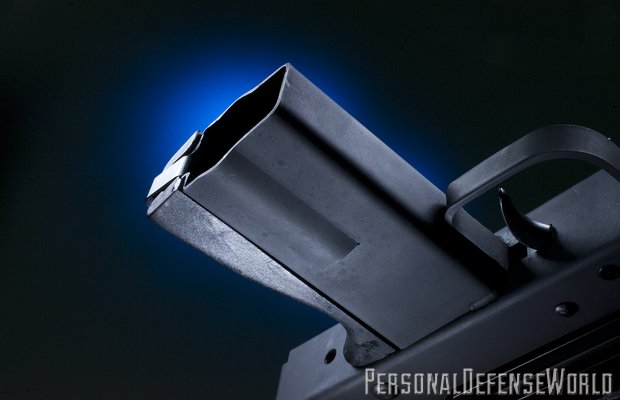 7 of 8
MAG WELL_phatchfinal
The grip also serves as the mag well to maximize the compact frame of the MPA930, a design feature that makes this a true CQB powerhouse. 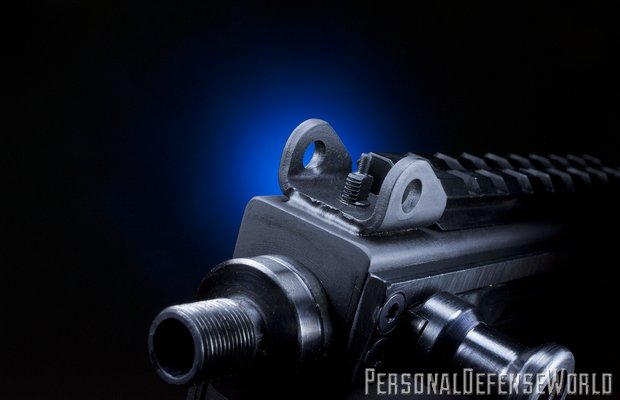 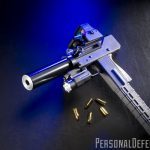 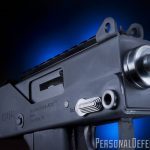 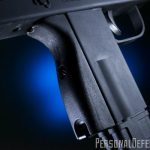 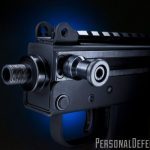 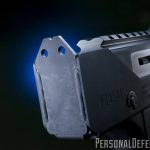 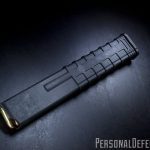 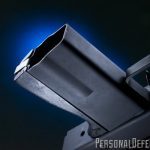 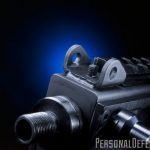 A sinister-looking gun can often become the focal point in an action adventure film. It can be the gun used by the villain or even better, a hero or heroine who doesn’t always play by the rules. And there are very few pistols in modern times that have better fit that role than the Ingram MAC-10. It was none other than John Wayne who helped make the Ingram famous by using it in the 1974 film McQ. The MAC-10 (and MAC-11 in .380 ACP) has appeared in a record 65 motion pictures and 23 television series from 1974 to the present day, making it one of the most recognizable guns in the world—which isn’t bad for a company that went out of business almost 40 years ago.

MasterPiece Arms’ Defender semi-autos are modernized, closed-bolt versions of the Ingram MAC-10. With a design inspired by the Israeli Uzi submachine gun (SMG), the MAC-10 was developed in the mid-1960s by American Gordon B. Ingram and put into production in 1970 by Military Armament Corporation, thus the acronym MAC. While not very successful at the time (Military Armament Corp. went out of business in 1976), CIA and SEAL units used MAC-10s during the Vietnam era. They were also adopted by a number of foreign countries for special operations use, including Israel and West Germany.

Luckily, I was able to get my hands on Masterpiece Arms’ latest Defender powerhouse, the MPA930 in 9mm, which came as a full kit officially known as the MPA930SST-X. 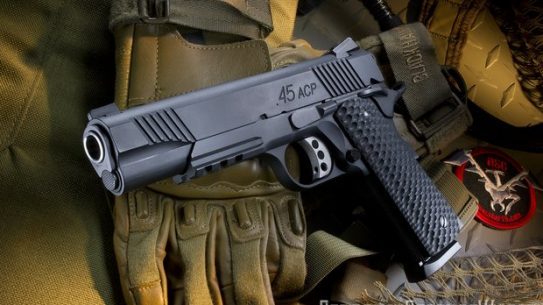 A sinister-looking gun can often become the focal point in an action adventure film.…