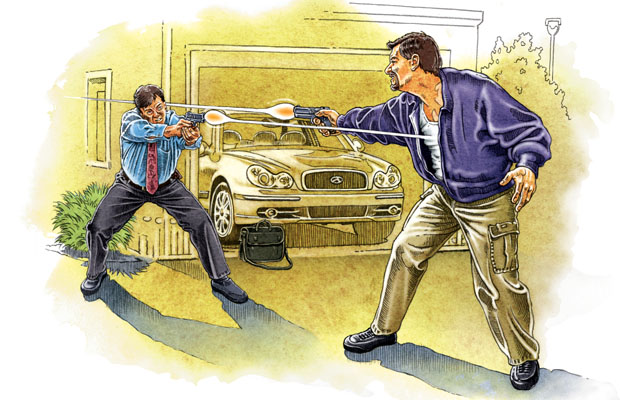 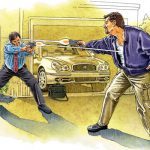 Early one chilly but bright and sunny winter morning in Durban, South Africa, where I live, I was due to leave for a three-day business trip to visit customers in the inland areas. I had meticulously packed the trunk of my car with relevant samples along with my own personal travel bag. What I didn’t know at the time (and would only discover later after watching CCTV footage from a neighbor’s system), was that there was a car parked across the road from my house with two occupants and they were listening to me getting ready to leave.

Just before I opened the garage door, the car drove away and the driver communicated with a pedestrian standing 200 yards up the road. The car turned around and the pedestrian began walking briskly toward my garage.

My automatic garage door had been sticking recently, so I was standing by the door manually getting it open. As the door raised and I could see into the street, I saw a car containing two males drive slowly past and stop about 20 meters beyond my house. This looked rather odd because the car stopped between my house and the next, sort of in the middle of nowhere. I looked back and saw a man was following behind the car. At this point I was between “O” and “D” in the OODA loop (Observation, Orientation, Decision, Action), or between condition “Yellow” and “Orange” on Jeff Cooper’s Color Alertness Scale. As he walked past my driveway, the man slightly nodded to me. Then, about 3 meters away, he raised a gun toward me and said, “Give me the car!”

I instinctively crouched, drew my Glock 27 from a cross-draw belt holster and opened fire. The first two shots were fired one-handed from waist level, while the next six shots were fired two-handed from a Weaver stance. All the time I was firing, his pistol was pointing at me. In my tunnel vision, the barrel of his 9mm looked about the same size as a drainpipe. He fired two shots that went very high—in fact, we never found the bullet strikes and the police only found one shell casing. When he fell and lowered his pistol, I stopped firing. Now I had to get out of tunnel vision (something I learned in a self-defense course) and try to assess if there was any other danger—maybe a wingman, maybe the two guys in the car.

The car that preceeded the hijacker drove away at a speed that wouldn’t attract any attention. By that time my wife had phoned the police and an ambulance. The suspect was shot seven times and was lying in the road more unconscious than conscious. He had been hit in the stomach, right forearm, left upper arm, left thigh and through his teeth and out the side of his neck. He miraculously survived, and after spending 15 days in the hospital (10 of which were in the ICU) then 18 months in prison awaiting trial, he has now been sentenced.

I was firing 155-grain Speer Gold Dot .40 S&W bullets with 6.3 grains of MP200 (identical to Unique powder) and CCI primers, from a Glock 27 with a 3.27-inch barrel. I estimate the muzzle velocity was around 1,000 fps (feet per second). My Glock 27 functioned flawlessly, leaving a trail of shell casings indicating that, during firing, I had also moved about 2 yards to my right, increasing the distance between myself and the hijacker. But the most important ingredient was training: Having a rough idea of what would happen, knowing it all happens very fast (the gunfire was all over in two seconds), instinctively shooting at very close range, and knowing how to disengage the extreme focus on a primary threat to scan for other dangers.

A lieutenant colonel (equivalent to a police captain), one of the first policemen to arrive, very proficiently took control of the situation and said it looked like a Section 49 case—legalese for self-defense. My Glock was taken for forensic evidence, but I got it back within three months, which wasn’t so bad considering some of the horror stories I’ve heard.

My very peaceful street has returned to being the homey place it was when I pleaded with the bank to loan me the money to buy it. I go out through my front gate, although a lot more cautiously than before, and look up and down the street. It’s a calm, residential example of suburbia. It’s hard to believe such a violent incident happened right here. That’s what’s so hard to accept—everything looks so peaceful, but it only takes a couple of guys with evil intentions and in a very rapid heartbeat, your little piece of paradise becomes a warzone. You have to know that it can happen, so be prepared for it. 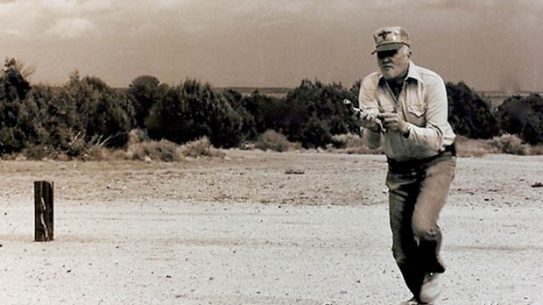 Get the inside scoop of the Gunsite experience with "A Jeff Cooper Retrospective".