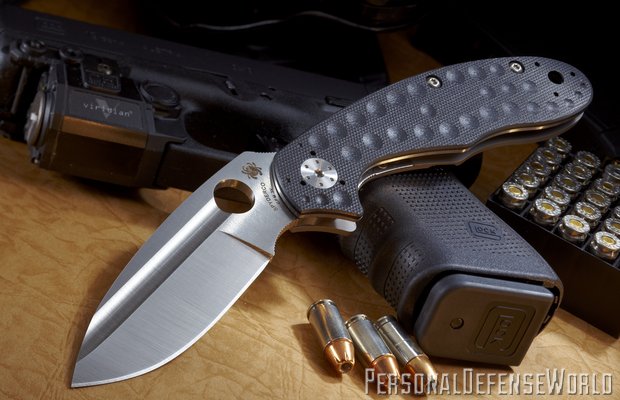 1 of 3
02_phatchfinal
The Spyderco Schempp Tuff would be at home in a cop’s pocket, soldiers pack and on a woodsmen’s belt…this folder does it all. 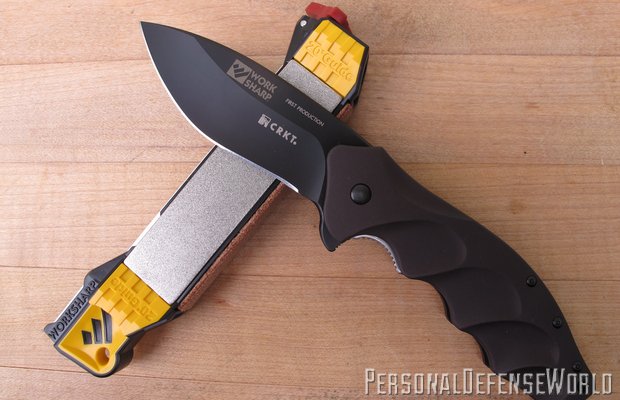 2 of 3
01_phatchfinal
The Spyderco Schempp Tuff would be at home in a cop’s pocket, soldiers pack and on a woodsmen’s belt…this folder does it all. 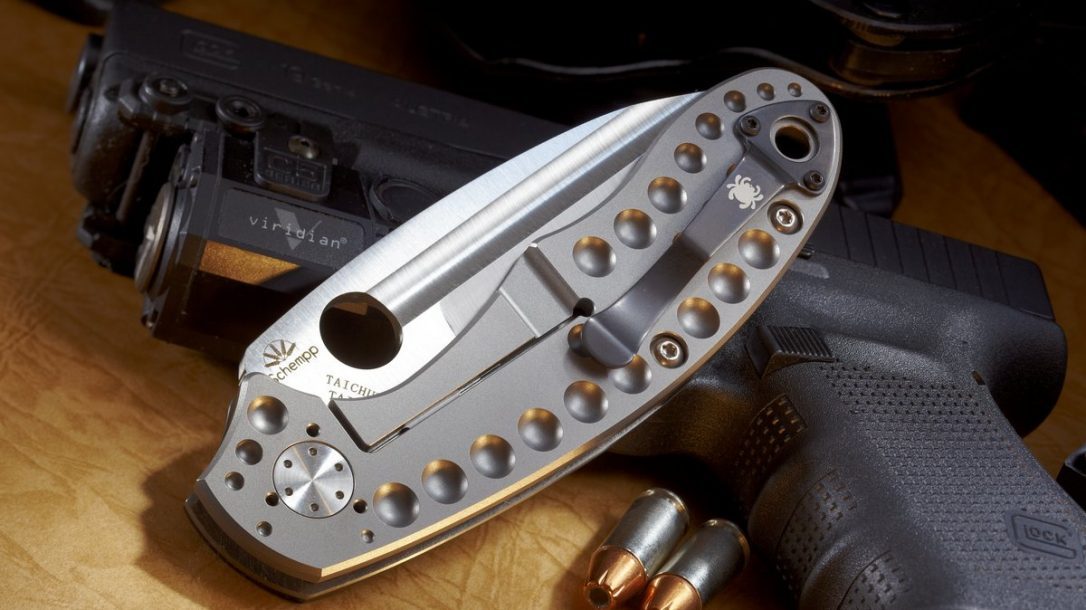 3 of 3
03_phatchjpeg
The titanium handles are drilled out to help reduce weight even further while also aiding the grip surface. 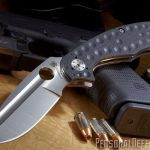 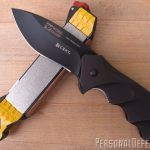 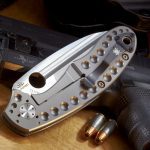 I carry a knife primarily (whether it is a folder or fixed blade as I carry both based on the perceived need and the activity I am participating in) as a cutting tool first and as a weapon second. My experience has shown me I am much more likely to cut items instead of people, but I also realize that things happen in life we have little control over and situations can turn in seconds, making my carry knife a weapon of circumstance/opportunity. I have trained in using the knife as a weapon and practice semi-regularly. When I select a knife, I keep these realities in mind. Reality is an important word, as too many people seem to live in fantasy when selecting personal gear. Yes, anything can happen but is it probable?

As I opened a recent box from Spyderco and removed the Ed Schempp designed Schempp Tuff folder, I could not help but think about my real world of work and play. Visualizing how the Schempp Tuff would fit into my lifestyle was an interesting exercise and doing so made me realize this could be a very useful tool. The Schempp Tuff is one knife that truly lives up to its name. Its robust CPM-3V carbon steel blade is mated to a handle featuring a G-10 scale and stainless liner on one side with a solid titanium scale on the other. An oversized pivot and a Chris Reeve Integral Lock with a hardened steel insert ensure superior strength and increased service life, while its dimpled texture and four-position clip provide exceptional grip and ease of carry no matter what the end use might be. The brainchild of renowned custom knife maker and design consultant Ed Schempp, it reflects his deep understanding of what it takes to make a tool that is both highly functional and practically indestructible, two qualities every knife owner looks for when paying hard earned money for a blade.

The first thing you will notice about the Tuff folder as you remove it from the box is it is a big, beefy knife. The blade is thick (0.157 inches) and has a paddle-style design that gives the knife a forward center of gravity. What I mean by this is when the knife is in your hand you can’t help notice the weight of the blade forward of the hand, it is almost hatchet-like in feel. The Schemmp Tuff can obviously chop, if necessary. The blade is 3.75-inches long with a cutting edge of 3.62 inches. A groove is cut the length of the blade to reduce weight and add strength while a thumb ramp at the rear of the classic Spyder hole with jimping helps hold the thumb in place when using a Sabre grip. I know I know… jimping is controversial with some liking it and some not. They are like forward cocking serrations on a semi-autopistol, if you don’t like them just ignore them, though some have difficulty doing so. The grip panels, both the G-10 and titanium sides, have a series of indentations cut in place to not only help reduce weight but to enhance the grip surface. The knife weights 6.3 ounces and has a suggested retail price of $399.95.

1 of 3
02_phatchfinal
The Spyderco Schempp Tuff would be at home in a cop’s pocket, soldiers pack and on a woodsmen’s belt…this folder does it all.

2 of 3
01_phatchfinal
The Spyderco Schempp Tuff would be at home in a cop’s pocket, soldiers pack and on a woodsmen’s belt…this folder does it all.

3 of 3
03_phatchjpeg
The titanium handles are drilled out to help reduce weight even further while also aiding the grip surface.

The four-position clip means the Tuff can be carried tip-up or down, left or right side pocket, which is an excellent feature on any folding knife. With a width hovering around half an inch, the Schemmp Tuff is not overly wide for a knife of its size. The Reeve Integral Lock keeps the blade in place during rough treatment and has a small tab of metal to keep the lock lever from being pushed too far outward. The lock also maintains close contact with the blade when closed, so opening it will require a bit more effort than other knives and I am not sure if the knife will loosen with time. I guess this is the price paid for a knife that locks solidly in place and will not collapse. There is a generous index finger guard to keep the hand from sliding on to the blade during rough use, but at the same time a finger groove with jimping has been cut into the rear of the blade so the end user can “choke up” for fine cutting chores.

The knife has a slight angle built into its design to allow the user to lock the wrist behind the knife and still have a proper (read that stronger) stabbing/ cutting angle. At this risk of applying “gun guy” physiology to a “knife guy” article, locking the wrist makes for a stronger application of any hand held tool. In the case of pistol shooting, a locked wrist gets the muzzle back on target faster for quicker shot to shot time. A locked wrist behind a knife will give a more powerful thrust, stab, cut or chop and the design of the Schemmp takes this into account, something few knife designers seem to understand.

Whether you consider your folder a weapon or a tool, the primary reason for carrying a knife is to cut something-and this something is usually unknown until the need arises. With this in mind, I cut a variety of materials I feel would be part of my real world of work and play, items like seat belt nylon, cardboard boxes (ammunition cases to be specific), rubber stripping, denim and an old pair or rip stop cargo pants as if I was cutting them to get at a wound. The Schemmp Tuff cut all of these materials without a problem, something any sharp knife can do, but what intrigued me was how well the Tuff could penetrate as if it were being used as a weapon. To do this, I brought back out my “meat man.”

Those who have read my reviews in the past will be familiar with this testing device. While I do not claim meat man is a true representation of human tissue it is a lot of fun to do. Consisting of a 3D plastic target, a layer of “junk beef” bought from a butcher, along with a layer of a modeling clay-like substance my wife makes up for me to simulate fat, meat man gives me a human- like testing mechanism. After I place the layers of meat and fat to the Tac-man via duct tape, I place a shirt over the layers and use it to stab and slash. The angled configuration of the Tuff should add power to any stab and I wanted to prove this thought. The jimped thumb ramp, index finger guard and locked wrist angle of the blade allowed me to punch through the shirt, tape, “fat,” meat and plastic shell of the target like they weren’t even there. The blade-heavy chopping ability of the Schemmp Tuff was also proven as this mini-hatchet made mince meat out of the tissue simulant. After working with the knife in this street-like methodology I came away with the opinion there is little the Schemmp Tuff could not do as it relates to cutting.

Did I have any druthers? Sure, I like small knives because in my mind compact knives are easier to carry even if they aren’t up to serious work or self-defense uses. I would like to see a more compact 2.9- to 3-inch version but, currently, Spyderco has no plans for this. Other than that, I would not change a thing about the Schemmp Tuff. It’s a robust, solid, well-built piece of steel that will do many, many things and you can’t ask much more than that of any knife. 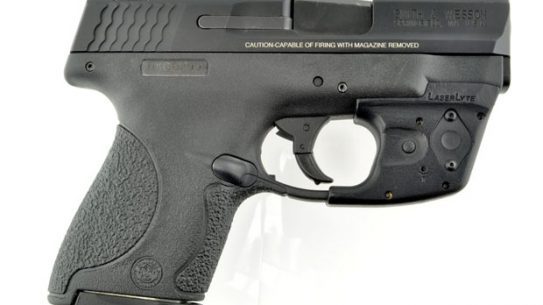