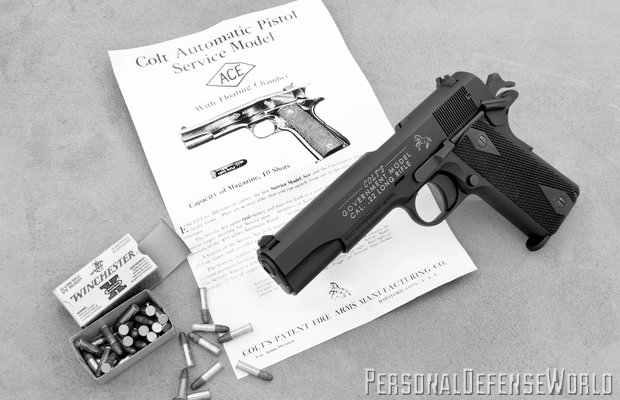 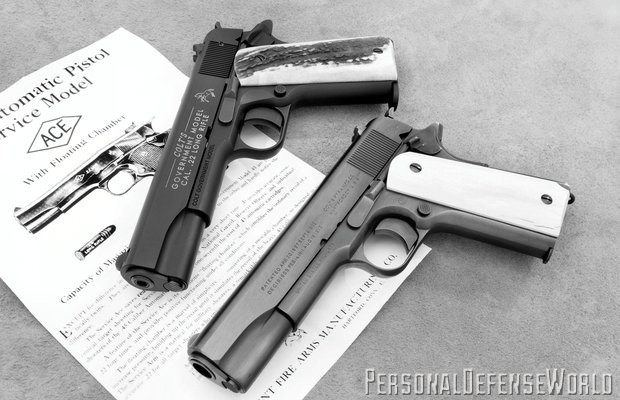 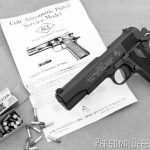 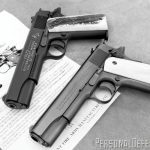 It was way back in 1931 when Colt’s introduced the first Government Model chambered in .22 LR. It was called the Colt Ace, and the inspired moniker was boldly stamped within a horizontal diamond on the left side of the slide.

The right side bore the standard Model 1911 patent dates and marking and in all other respects appeared to be a Government Model .45 with the small thumb safety (still in use at that time), arched mainspring housing and serrated slide release. What the original Ace didn’t have was sufficient power to consistently operate the heavy slide with .22 LR cartridges. The 4.75-inch barreled 1931 to 1941 design was not one of Colt’s greater success stories, but the idea proved was well worth pursuing with an improved model appearing in 1937 under the name Service Model Ace, which employed a new adjustable rear sight, a 5-inch barrel, and a floating chamber device mitigating the issues that had plagued the original 1931 design. At the same time Colt’s began offering a .45 ACP to .22 LR conversion unit, so owners could practice shooting or go plinking with the same handgun.1 The ACE models used 1911-style magazines that carried 10 rounds of .22 LR, as did the conversion kits. Both used the new floating chamber designed and patented by David M. “Carbine” Williams.2 Despite its notable improvements, the Service Model ACE was not an overwhelming success either, with sales totaling around 13,500, a couple of thousand better than the original Ace. Production ended after World War II.

It is one of those grand old stores of American marketing, we invent, we improve, we discontinue due to lack of interest, and immediately thereafter, interest is piqued. In the case of the .22 caliber Government Model 1911A1, that process took from 1945 until 1978 by which time the original 1931 through 1945 pistols had become something of a collector’s item. The Post-war ACE Service Model was introduced in 1978 with specifications identical to the late prewar models. The new .22 caliber guns had a bright blued finish (though some were nickel plated by the Colt’s Custom Shop), large thumb safety, click adjustable rear sight, and they were far more successful than either the original Ace or Service Model .22s, with sales reaching over 30,000 by 1989, when the .22 LR 1911A1 went on hiatus once again. Today, post-war Ace models in excellent condition easily command over $1,000. An original Ace circa 1931 to 1937 can bring upwards of $5,000 and the Service Model circa 1937 to 1945 a whopping $7,500.3 That makes the new Colt Government Model .22 a virtual steal at just $399 to $499.

There are a number of similarities between the latest .22 caliber Colt Government Model and the original post-war version, and an almost equal number of differences, the most notable of which is that the new small caliber Colt Model 1911A1 is made in Germany by Carl Walther GmbH and sold in the U.S. through Umarex USA. The guns even have their own dedicated website, as there are three different versions available, Government Model, Rail Gun (with Picatinny rail), and a Gold Cup Trophy Target Model. The Rail Gun and Gold Cup have target triggers, skeletonized hammers, and different sights than the standard Government Model.

In comparison, the original Ace tipped the scale at 38 ounces, the Service Model at 42 ounces (which was 3 ounces more than a .45 ACP model). The new Colt .22 only weighs 36 ounces (empty) and packs a dozen .22 LR rounds in the magazine instead of 10, giving these new models 12+1 capacity. A 10-round magazine is also available.

The fit and finish of the .22 Colts are notably different from the original .22 LR pistols. Gone is the handsome polished Colt blue of yesterday, replaced by a more utilitarian and durable matte black. The entry level Government Model (tested) has all of the slide marking highlighted in white, something one either likes or dislikes. No middle ground there. The standard grips are hard rubber with the checkering and diamond pattern originally seen on early 1911 hardwood grip panels. Though lackluster compared to wood, the black rubber grips blend nicely with the 1911A1’s matte finish.

To give our test gun a little more pizzazz we added a pair of hand-carved Elk panels ($200 from Eagle Grips), which add a little more width to fill the hand and contrast the matte black frame and slide. The Elk horn’s eye-catching earth tones and bark-like texture really set this gun off.

For gun leather a combination alligator and leather belt holster, designed by Mernickle Custom Holsters, was chosen. This rig is not only good looking but contour-fitted for the 1911A1 frame. The polished black alligator pouch is sewn to a curved skirt that belts in tight to the body. It also features a high back panel to keep the hammer and grip safety from digging into your side. The Mernickle rig rides solidly and the gun draws cleanly. The high back panel also helps with re-holstering, making this an overall top notch carry rig for any 1911 or 1911-style semi-auto, regardless of caliber.

When it comes to the .22 LR caliber, I have always gone with Winchester cartridges, ever since I was a teen shooting cans and paper targets with my first Ruger .22 semi-auto. Back in the 1980s, I owned a post-war Colt Ace and always shot Winchester ammunition, so when it came time to run the new 1911A1 Government Model .22 through the ringer I went shopping for two favorites, Winchester Wildcat 40-grain lead round nose high velocity and Winchester Super-X standard velocity.

The Super-X passed through the chronograph at 995 feet per second (fps) only to be slightly outdone by the Wildcat clocking an average 1,000 fps from the Colt’s 5-inch barrel. Tests were fired at a target 50 feet, slow fire, using a two-handed hold, and Weaver stance.

The trigger pull on the test gun was a weighty 7.6 pounds to 8.3 pounds average, thus not entirely consistent from shot to shot. The standard front sight is hard to acquire in bright sun, and overall, the adjustable target sights (and trigger) on the Rail Gun model, which sells for roughly $30 more, is a better choice overall.

Compared to other .22 semi-autos in the medium frame class, like the excellent Walther P22, the Colt’s recoil spring is too light for a gun the size of a 1911A1. The Colt .22 Government Model actually feels more like a .177 caliber air pistol (which Umarex also makes) than a .22 LR cartridge gun. Aside from that, mechanically there were zero faults with operation; the magazines are easy to load and handle, empties drop freely with a modest press of the release button, and the slide drops effortlessly when reloading. It is the trigger pull and general accuracy that raise a red flag here. While I have read earlier tests of this model with accuracy results under 1-inch (fired from a bench rest), I found it hard to pin point a best group with this gun at 50 feet firing off hand. The very best 10 round group measured 3.75 inches spread from the 5 ring at 8 o’clock through the 7, 8, 9, and bull to the 1 o’clock position. The closest to a 1-inch group was four rounds outside the black at 8 o’clock.

For today’s target work, plinking, and recreational shooting the .22 LR is still the best and most economical cartridge you can buy, and any quality made semi-auto that can accurately send that 40-grain lead bullet down range is a good choice. The Colt 1911A1 Government Model .22 is an adequate shooter but I would pop for the extra $30 and get the better sights and target trigger. 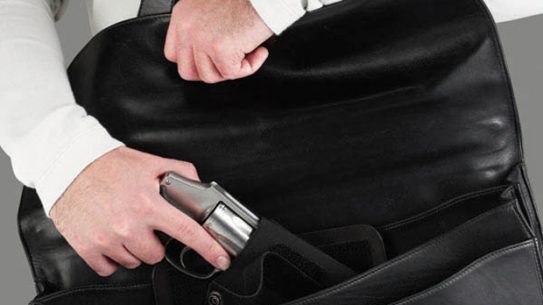