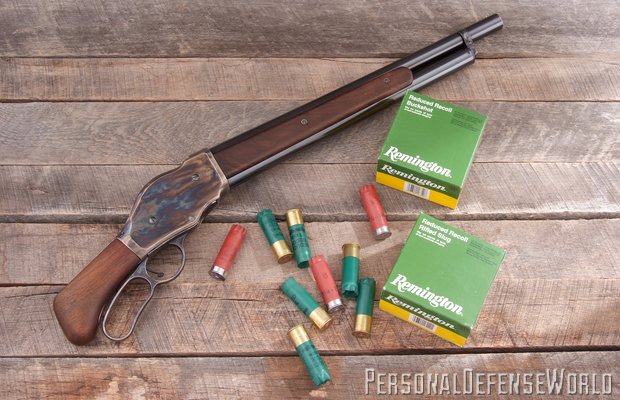 1 of 3
1. Chiappa 1887_phatchfinal
One of several Chiappa lever action shotgun models based on the Winchester 1887, the sawed-off version is available in three configurations, deluxe (shown) with color casehardened receiver and lever, all blued, or in matte black. 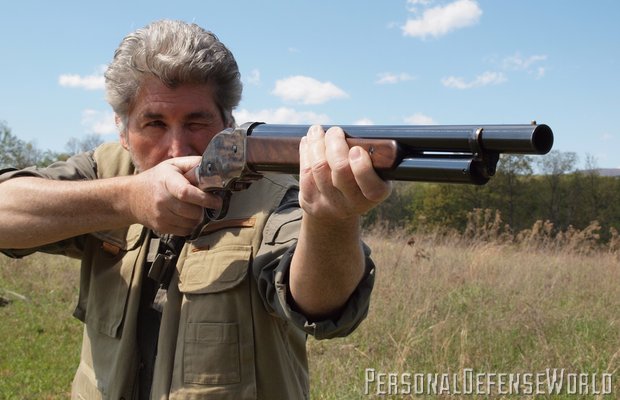 2 of 3
OLYMPUS DIGITAL CAMERA
The author takes aim down the 18.5-inch barrel at a target set out at 21 feet. Held at shoulder level, a strong off hand hold is necessary to prevent the gun from jumping back when fired. 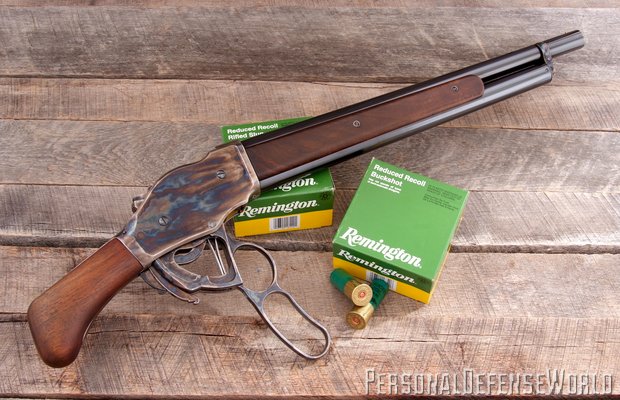 3 of 3
2. opt. Chiappa 1887_phatchfinal
John Moses Browning’s use of a rolling block-like action for the 1887 (as accurately copied by Chiappa) followed the arc of the lever in its movement with the internal mechanism dropping down from the receiver. Note the trigger to the rear of the mechanism. 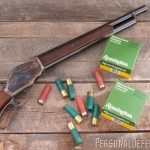 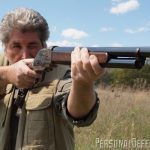 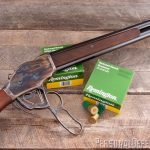 There is a timeless appeal to the Model 1887 lever action shotgun, and this latest rendering of the famed Winchester scattergun made by AmriSport Chiappa offers a great many modern-day advantages — some of which didn’t exist in the 1880s when the original Winchester was the most feared shotgun on the American Frontier.

Given the exceptional quality of the Chiappa 1887 and its authentic detail, fit, and finish the most important difference between it and an original, aside from collector value, is the capability of loading this modern version with low recoil defensive shot shells such as Federal Premium Reduced Recoil 9-pellet Tactical Buckshot and Remington Law Enforcement Reduced Recoil Rifled Slugs. Back in the day of the originals there was only full load black powder buckshot with a kick like a mule.

A true sawed-off shotgun with both a shortened barrel and cut down stock, is easy to maneuver in close quarters, and in a sudden encounter, presents less of an opportunity for an attacker to block or disarm by grabbing the barrel. The sawed off 1887 stock configuration also makes it easier to use a strong side butt stroke in close quarters self defense as there is no shoulder stock for an assailant to block and the you have the full force of your body behind that rounded off walnut knob.

For the best performance with a sawed off shotgun the use of low recoil ammunition is highly recommended because the last thing you need is heavy recoil, whether it is an 1887 lever gun or a brand new Mossberg pump with a pistol grip. In discussions with ammunition experts the order in which shotshells are selected and loaded in a repeating shotgun, be it pump, semi-auto, or lever action, is dependent upon specific needs. For the Chiappa 12 gauge lever action, which holds five rounds in the magazine, options should utilize only low recoil shot shells. One formula is to first load two 2¾ length 00 buckshot, followed by two rifled slugs, and last (the first round that will be chambered) a heavy 2¾-inch birdshot load like No. 8. This can also be substituted for BB shot (devastating power but low penetration through walls). The No. 8 or BB shot at close range is going to do a lot of damage and probably end the confrontation, either putting a home invader on the ground or forcing a retreat. No. 8 and BB shot is almost the shotgun equivalent of a frangible bullet with little likelihood of penetrating the target or the walls behind, if you miss. If that fails the next two rounds chambered are rifled slugs, which will knock anyone off their feet with a hit to center body mass. However, a slug is only one 1-ounce lead round, so you have to hit the target, and it is amazing how easy it can be to miss, even at close range. Going to the 00 buckshot ups the capability from one large pellet to nine of approximately .33 caliber size. The other option is to load No. 4 buckshot (24 pellets) for a greater spread.

Another proven theory is to load three 00 buckshot and two low velocity, low recoil rifled slugs for the first two rounds that will be chambered. A hit with a 2¾-inch slug usually stops the fight. If not, there is still the 00 buckshot. The idea in any loading scenario is to end the confrontation as quickly as possible. There is one other option that stems from law enforcement, and that is to make the first round a Law Enforcement Concussion shell (powder only, no pellets; such as Federal Premium Flash Bang shells) to disorient an intruder1. The combined sound and concussion at close range would put most home invaders on their knees, and there is almost no risk of collateral damage. And lest we forget that unmistakable sound of a round being chambered into any lever action weapon? That would give most clear thinking individuals with any sense of self-preservation reason to retreat before the first shot is even fired.

On the subject of thinking clearly, keep a good electronic noise-reducing headset by your shotgun. These allow enhanced hearing of normal sounds but instantly block loud sounds such as a pistol, rifle or shotgun discharge up to 20 decibels. This is a good safety measure to protect you from the same disorienting effects (noise) of a shotgun discharge in close quarters, while not decreasing one’s ability to detect ambient sounds.

1 of 3
1. Chiappa 1887_phatchfinal
One of several Chiappa lever action shotgun models based on the Winchester 1887, the sawed-off version is available in three configurations, deluxe (shown) with color casehardened receiver and lever, all blued, or in matte black.

2 of 3
OLYMPUS DIGITAL CAMERA
The author takes aim down the 18.5-inch barrel at a target set out at 21 feet. Held at shoulder level, a strong off hand hold is necessary to prevent the gun from jumping back when fired.

3 of 3
2. opt. Chiappa 1887_phatchfinal
John Moses Browning’s use of a rolling block-like action for the 1887 (as accurately copied by Chiappa) followed the arc of the lever in its movement with the internal mechanism dropping down from the receiver. Note the trigger to the rear of the mechanism.

Developed by John Moses Browning, the Model 1887 was designed to meet Winchester’s demands for a lever action shotgun to capitalize on the reputation of the company’s famous repeating rifles. The Model 1887 (and subsequent Model 1901) became eminently successful in the late 19th and early 20th centuries both as a hunting gun when fitted with the long 30.25-inch barrel and as a fearsome weapon in the hands of lawmen and railroad guards when sporting a short 22.25-inch barrel and a magazine full of double aught buckshot.

Fully loaded it had the capacity of a six-shooter (five in the magazine and one chambered) and in a practiced hand nearly the speed, but with far more deadly results for those on the wrong end. Sawed off shotguns with barrels of 12 to 18 inches, some with stocks cut off just below the wrist, were wielded by sheriffs, marshals, city policemen, prison guards, Texas and Arizona Rangers, and others on both sides of the law, the latter of which finally led to the National Firearms Act in 1934 limiting the barrel length of a rifle or shotgun to no less than 18 inches for civilians. More than 125 years later ArmiSport Chiappa offers this striking copy of the 1887 sawed off guard gun with a legal length 18.5-inch barrel in three versions: Deluxe with color casehardened receiver and lever, high polish blue barrel; walnut stock and forend, blued with wood grip and forend; or matte black with a soft touch rubberized finish on the shortened pistol grip stock.

One of the more versatile designs based on the historic Winchester lever gun, the sawed-off Chiappa model is suitable for use not only as a home defense weapon due to its compact size and multi-round capacity but is also ideal as a field gun for hunting trips, four wheeling in the back country or off road in the desert. As a trail or camp gun the 1887 can be easily carried in a backpack or a shoulder scabbard. With a variety of shot shells from birdshot, like #7½ (1 ounce of shot) or #8 heavy game loads (1⅛-ounce of shot) to self defensive rounds ranging from #4 buckshot to 00 buck and rifled slugs, the compact 1887 can serve any number of uses from personal defense to fending off a predatory animal, just like the originals did more than 125 years ago. There are many modern shotguns designed for these same tasks, but owning a piece of the past (even a modern reproduction) confers a sense of history and heritage that make the 1887 more than just a shotgun.

Recoil with all test rounds was moderate. The Chiappa can also be loaded with a sixth round in the chamber but it is not advisable to carry the gun with a chambered round. The 1887 can also be manually decocked and the hammer set into the half cock position, although it takes practice. The shallow knurled hammer spur makes decocking the action a little twitchy and it is an equal handful to thumb cock.
Trigger pull on the test gun averaged a light 3.5 pounds and the lever action operates smoothly but requires a swift and deliberate one-two motion; lever down ejects spent case and cocks the hammer; lever up chambers a fresh round. You can feel and moreover hear everything work. There is nothing quiet about a lever action shotgun.

The best total grouping from five assorted rounds (as listed) all struck in center body mass, the No. 8 patterned with the majority of shot striking in the upper chest area, most within the 8, 9, 10 rings. The next two rounds fired were slugs, both hit in the 10 and X with the wads also tearing a quarter-sized holes in the target. Two rounds of 00 buckshot, a total of 18 pellets, struck in the 9, 10 and X at 12 and 1 o’clock.

Although the 1887 is not as fast to work as a pistol gripped 12 gauge pump action, it is equally accurate at close range. Admittedly this is a novel shotgun for home defense but like other short barreled, pistol gripped 12 gauge models; it has its special attributes, one of which is an appearance unlike any other modern day shotgun on the market. To get more information and the location of the nearest retailer call 937-835-5000 or visit chiappafirearms.com. 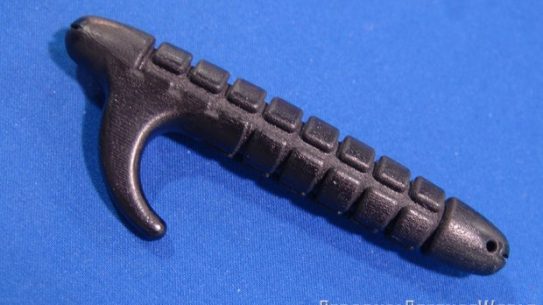 There is a timeless appeal to the Model 1887 lever action shotgun, and this…